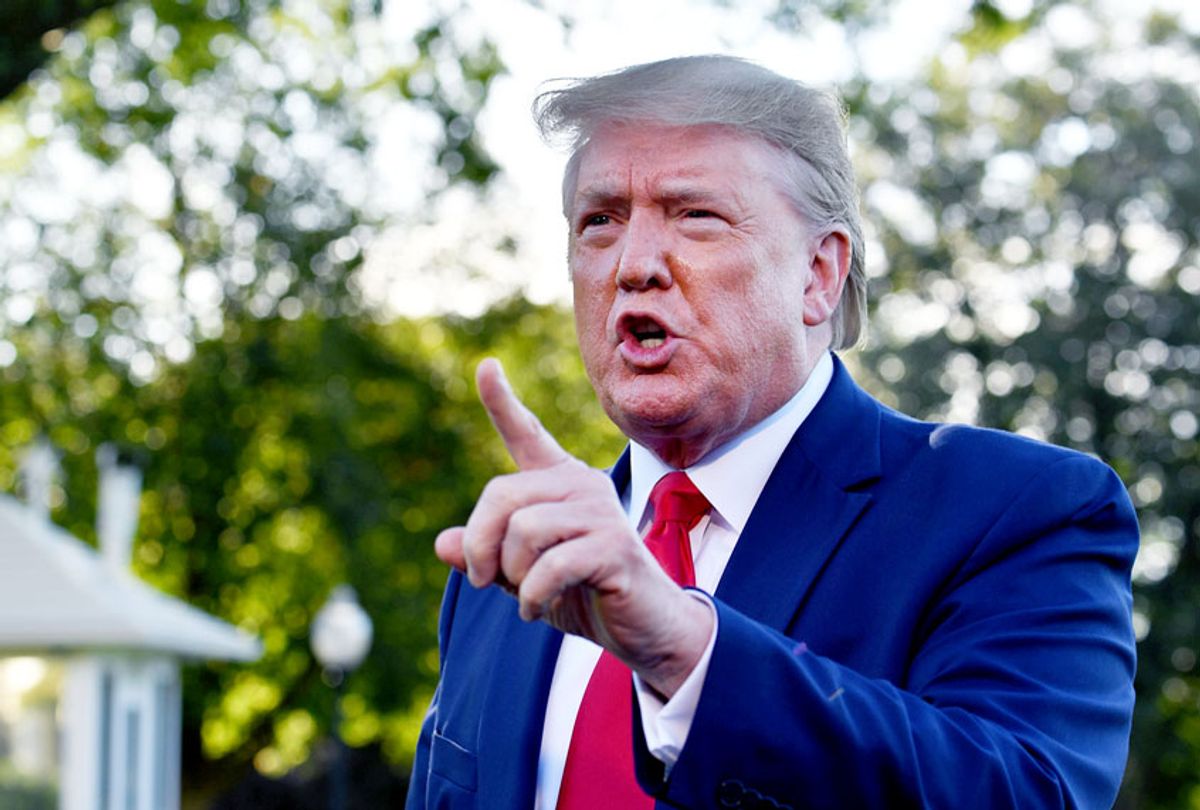 Two armed men who set up a tent outside of a Florida polling place told sheriff's deputies that they were hired by the Trump campaign, an election official said on Wednesday before the campaign denied involvement.

Julie Marcus, the Pinellas County supervisor of elections, told WTSP that two armed men in "security-type uniforms" who said they were licensed through a security company were spotted outside of a polling place in St. Petersburg on Wednesday.

"They indicated — and this has not been confirmed yet — that they were hired by the Trump campaign," Marcus, a Republican, told WFLA.

The Trump campaign said it had nothing to do with the incident.

"The campaign did not hire these individuals nor did the campaign direct them to go to the voting location," Trump campaign spokeswoman Thea McDonald told WFLA.

Marcus, who was appointed by Trump ally Gov. Ron DeSantis, said the sheriff's office was called after a poll worker spotted the men.

"The sheriff and I take this very seriously," Marcus told the outlet. "Voter intimidation, deterring voters from voting, impeding a voter's ability to cast a ballot in this election is unacceptable and will not be tolerated in any way, shape or form. So we anticipated many things going into this election — not only cybersecurity, but physical security — and we had a plan in place and executed that plan."

The men told deputies they would return to the polling location the next day, as well. Marcus said that a deputy would be set up outside the polling place on Thursday.

Pinellas County Sheriff Bob Gualtieri told WFLA that it was illegal to bring a gun to a polling place in Florida — and "intimidation won't be allowed, either."

"I'm urging my supporters to go into the polls and watch very carefully," Trump said at the time. "Because that's what has to happen. I am urging them to do it."

Since then, Minnesota Attorney General Keith Ellison launched an investigation into a Tennessee-based security firm that had been recruiting armed guards to act as poll watchers.

A lawsuit filed by the Council on American-Islamic Relations Minnesota and League of Women Voters of Minnesota alleged that the company Atlas Aegis posted a Facebook ad recruiting former U.S. Special Operations personnel to protect polling places and businesses from "looting and destruction," according to ABC News.

Atlas Aegis Chairman Anthony Caudle told The Washington Post that the guards intended to "make sure that the antifas don't try to destroy the election sites." Ellison said the effort was illegal.

"Minnesota and federal law are clear: no one may interfere with or intimidate a voter at a polling place, and no one may operate private armed forces in our state," he said on Tuesday. "The presence of private 'security' at polling places would violate these laws. It would make no one safer and is not needed or wanted by anyone who runs elections or enforces the law. For these reasons, my office is formally investigating Atlas Aegis."

A Trump campaign spokesperson told The Post that it was not aware of the effort — and had nothing to do with it.

But Republicans have worked for months to recruit tens of thousands of volunteers to act as "poll watchers" after a federal court lifted a decades-long ban on Republican poll watching following repeated instances of voter intimidation.

"In recent months, official Trump campaign advertisements have adopted the stark language of wartime recruitment, calling on supporters to 'enlist today' so they can join the 'top ranks' alongside 'battle-tested Team Trump operatives,'" Time reported.

"The radical left are laying the groundwork to steal this election from my father," Donald Trump Jr. warned in a recent ad. "We need every able-bodied man and woman to join Army for Trump's election security operation . . . We need you to help us watch them."

The Giffords Law Center warned in a recent report that "it is likely that significant numbers of people will bring guns to polling places under the guise of preventing election fraud."

The Trump campaign has denied that the effort is aimed at intimidating voters, but former Department of Homeland Security analyst Daryl Johnson told Time that the campaign's rhetoric was dangerous.

"By calling people to polling stations," he said, "these armed militias could show up and lead to the intimidation of voters under the guise of poll watching."