They're fun to receive, share and compare. But do the simple stickers actually make a difference in voter turnout? 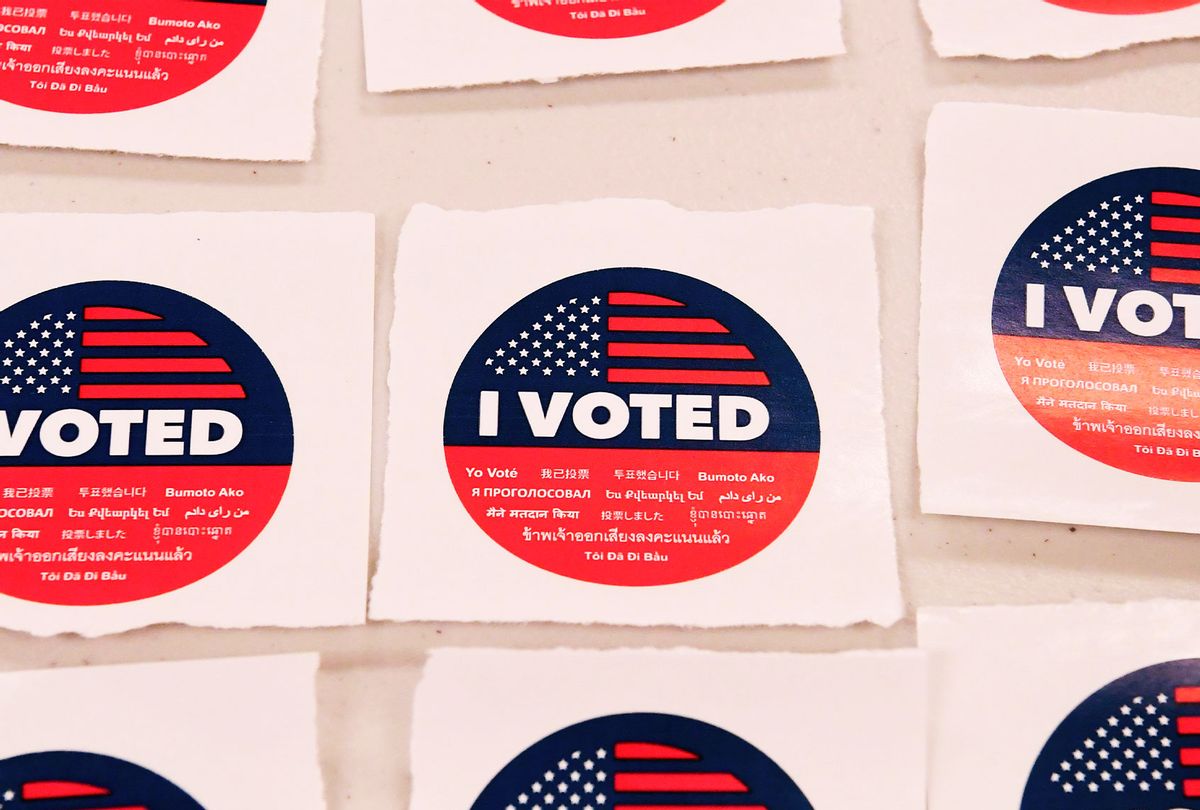 Multi-lingual "I Voted" stickers await voters after they cast their vote in the 2020 US elections at the Los Angeles County Registrar in Norwalk, California on October 19, 2020. - Voter turnout is ten times higher than in 2016 in California according the Secretary of State Alex Padilla as over 600,000 Los Angeles County ballots are already at the county registrar. (FREDERIC J. BROWN/AFP via Getty Images)
--

About two decades ago, the Jefferson County Board of Elections, the county that encompasses Louisville, Ky., did away with "I Voted" stickers in an effort to keep its buildings clean. Voters had taken to pasting the stickers on sidewalks, trash cans and water fountains at the churches, schools and community centers that were serving as temporary polling stations. The owners of those buildings were sick of scraping up the mess post-elections, so they threatened to stop providing their spaces to the county.

"People weren't always responsible; it was causing problems," Nore Ghibaudy, the spokesperson for the board, told The Courier-Journal. "We have enough going on the day after the election without sending people out to clean polling locations."

But those same people who lost their sticker privileges seemed to miss having a tangible signifier that they performed their civic duty (especially in the age of the "I Voted" selfie). In the years since, some voters have simply ordered or printed their own roll of stickers online. Local businesses have offered election day discounts for people who voted, trusting that folks would abide by the honor system. Eventually, in 2019, the county adopted "I Voted" wristbands, following the lead of Chicago polling places.

Still, some people just want what other cities have. As a friend of mine told me on election day four years ago, "I just want someone to give me a damn sticker."

The next day she sent a follow-up: "I guess we have more important things to worry about."

Now we're in the midst of an unprecedented election year, as clichéd as it is to say. Questions regarding early and mail-in voting abound amid postal service lags, and President Trump has yet to guarantee a peaceful transfer of power if he loses the election. But if Twitter is any indication, voters are curious if stickers are still in the cards — and it turns out that the promise of a badge, however small, that indicates you participated in democracy has long been a viable incentive for drawing potential voters to the polls.

The origin of the "I Voted" sticker

The origin of the "I Voted" sticker is actually as hotly contested as any political race. A 1982 Miami Herald article says that Fort Lauderdale businesses gave a discount to customers donning an "I Voted" sticker, according to Time magazine, but the Phoenix Realtors Association (PRA) claims to have dreamed up an "I Voted Today" sticker in 1985.

Former Phoenix mayor Skip Ramsza, who was also the former PRA president, told The Arizona Republic in 2006, "We were absolutely the first ones in the country. Back in 1985-'86, I went to the national Realtors convention, [and] no one had heard of any stickers in their communities."

But then, according to Vox, teachers unions offered them to members in 1984 to encourage coworkers to vote. The same year, Vice President George H. W. Bush got a sticker that said "I Voted Today — Have You?" in Houston when he cast his ballot in the presidential election in 1984, according to a report that day from the United Press International wire service.

Regardless, many civic organizations across the country began offering their versions of the stickers to voters to encourage voting, and since then, different lists exhaustively rank the individual state's designs. Georgia's peach-shaped sticker is always a favorite (as Elle put it in their round-up, "Butts for democracy!"), while California's "I Voted" sticker features 13 different languages, a nod to the state's diverse population.

They're fun to receive, compare and post — but do the stickers actually make a difference?

The power of social pressure

"I Voted" stickers only cost about a penny apiece to produce, but their value to capture the attention of certain voters is priceless. In a 2012 article for "The Atlantic," Derek Thompson wrote about a measure taken in Switzerland where elected officials, after noticing a dip in voter turnout, created a vote-by-mail system in an effort to raise participation.

Their thinking was simple: Voters likely had difficulty justifying spending many hours (or sometimes an entire day) at the polls to cast a single vote.

"The Swiss government thought about falling turnout like an economist," Thompson wrote. "If the 'time-cost' of voting was discouraging people from visiting the polls, a simple vote-by-mail system should make voting feel more like a 'bargain.'"

On paper it made sense, but voter participation slid even further in the areas where vote-by-mail was introduced compared to the rest of the country. "It's social pressure, not economics, that motivates the marginal, or on-the-fence, voter," Thompson wrote. "By creating the option to vote by mail, Switzerland got it backwards. They decreased the voting costs, but also removed the social pressure."

And for some potential voters, that social pressure is necessary to prompt them to get to the polls — enough so that some stickers in the '80s and '90s were a little more, well, aggressive, some reading, "I Voted, Have You?"

"We live in a world of memes, of emojis, of visual content that expresses things — how we feel, what we do, who we are. And the 'I Voted' stickers reflect that as well," said Charles Stewart III, a political science professor at the Massachusetts Institute of Technology, in a recent interview with the Boston Globe.

He continued: "For adults, they're almost like captain's wings you get as a little kid for flying on an airplane."

But the overall picture of how or if stickers affect voter turnout is still a little fuzzier. In 2016, the National Bureau of Economic Research released a paper that found that the expectation "of being asked [if they voted] motivates turnout if individuals derive pride from telling others that they voted, or feel shame from admitting that they did not vote," and that the majority of people didn't like to lie about their voting record.

And the popularity for mail-in voting continues to grow, especially amid the pandemic. According to new research from the Brookings Institution, 59% of voters support holding elections by mail because it "saves people time and, at a time of a major pandemic, protects their health." With that in mind, people may not receive their "I Voted" stickers in the way they typically do — but with the advent of social media, voters have other ways to signal to their peers that they did their civic duty.

The "I Voted Sticker" goes digital

As Mother Jones reported, since 2008, Facebook has offered some users profile buttons and filters with phrases like "I'm Voting" or "I'm a Voter." According to reporter Micah L. Sifrey, company researchers tested two versions to determine how to optimize the tool's impact. Users were broken into three groups: One saw the "I'm Voting" button and also saw if their friends voted; one saw the button, but not their friend's behavior; the final group saw nothing related to voting at all.

"Their paper, with the astounding title 'A 61-Million-Person Experiment in Social Influence and Political Mobilization,' found that about 20 percent of the users who saw that their friends had voted also clicked on the 'I Voted' button, compared to 18 percent of the people who didn't get the 'I Voted' message from their friends," Sifrey wrote. "That is, positive social pressure caused more people to vote (or at least to tell their friends they were voting)."

This year, as more people are voting via mail before election day, it's worth considering that the future of the "I Voted" sticker — at least for some voters — will be digital. But that hasn't stopped potential voters from asking if their sticker is coming in the mail.

So, what's happening with "I Voted" stickers this year?

Audrey Didier, a 19-year-old voter in Westborough, Mass., told the Boston Globe that she was excited to take part in a pivotal presidential election — and that she was equally excited to don her "I Voted" sticker.

Unfortunately, after fishing around in the envelope that contained her mail-in ballot, the sticker was absent. "Not seeing one when I opened [the envelope] was a little disappointing," Didier said, "because I feel like it's such a badge of honor."

Though it varies from state-to-state, it's typically up to individual counties or cities to handle the purchasing and distribution of "I Voted" stickers. In Los Angeles County for example, stickers are included in the envelope with the ballots pre-voting. But some municipalities are choosing to forgo them this year for mail-in voters; as Debra O'Malley, a spokeswoman for Massachusetts Secretary of State William F. Galvin's office, told the Globe, "A lot of voters would have liked to have stickers included in their ballot packages, but everything you add to those packages slows down the mailing of ballots."

Some communities where in-person voting is taking place have also forgone stickers as organizers say they want to maintain distance between voters and volunteers and prevent lingering at the polling locations.

But other communities have adapted the tradition for pandemic times. In Sacramento, voters can visit the county elections office and voting drop-box sites to receive a sticker, while individual companies and magazines, like 5280 Magazine in Denver, have created free downloadable stickers for voters. In a way, it's a return to the civic organization-led "I Voted" initiatives of the 1980s.

Speaking of returns, this election also marks the year that Chicago is forgoing the "I Voted" wristbands and returning to stickers for the first time since 2012. According to the Chicago Sun-Times, Chicago Board of Elections Chairwoman Marisel Hernandez said "the decision to dump the wristbands handed out in recent years was made to protect poll workers from coming into close contact with voters during the coronavirus pandemic."

But the stickers, which celebrate the 100th anniversary of the 19th Amendment, also serve as a symbol of civic pride, Hernandez said.

"It's an acknowledgment to a lot of people not only that they voted, but possibly a lot of other things — that they contributed to this election, that they are a part of it," she said. "With COVID and all of the other things going on, it is just a nice little gift to our voters."

The stickers (which look to be about the size of my palm!) are also being sent to mail-in voters and have already generated a fair amount of excitement.

"This sticker is an ABSOLUTE UNIT," one Twitter user wrote. "You could probably tell I voted from space."

Which, if social pressure really does get folks to the polls, isn't a bad thing.