"Bly Manor’s" lesbian love story is no cause to celebrate 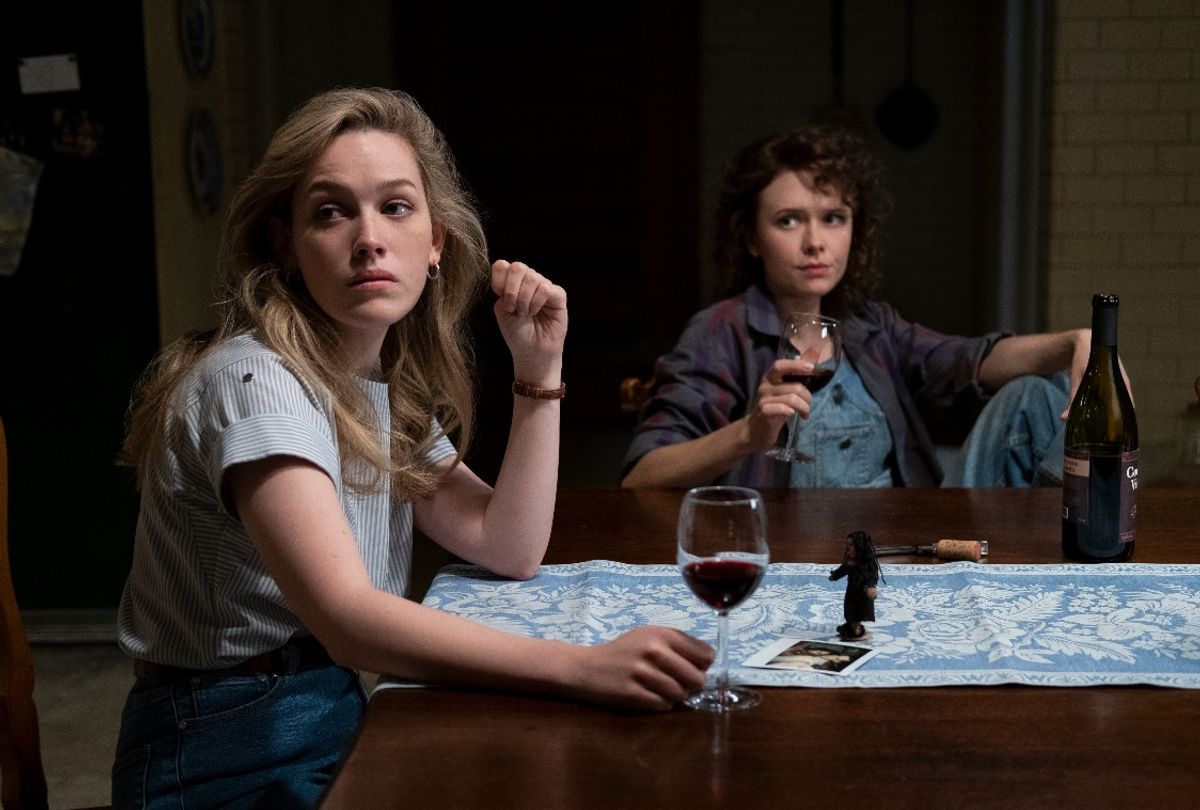 In the final episode of "The Haunting of Bly Manor," a stylish serialized riff on Henry James' horror novella "The Turn of the Screw," the show's central philosophy is revealed during an exchange between two women. "You said it was a ghost story," the bride from the opening scene tells her mysterious silver-haired guest, the benevolent narrator (Carla Gugino) who's been regaling the wedding party with the story of Bly Manor. "It isn't. It's a love story." To which the narrator replies, her eyes loaded with meaning: "Same thing, really."

[Editor's Note: The following contains spoilers for "The Haunting of Bly Manor," including the ending.]

Taken at face value, this comment implies that "The Haunting of Bly Manor" is a love story, which tracks with the grief-stricken backstories of the various characters. It's a poignant view of ghost stories; transforming the idea of the haunting ghoul into a lingering spirit watching over loved ones. But if ghost stories are love stories, the reverse is also true. Heartache can render you a shell of your former self, haunted by the shadow of lost love. To cling to the memory of a person, whether dead or simply no longer there, is a kind of madness that can lead only to misery. At least, that seems to be what happens to the poor souls of "Bly Manor."

The show takes liberties with James' original story, often to creative and thrilling heights, and contemporizes it by making the central ingenue queer. Unfortunately, it's no longer enough simply to represent a queer love story. This being a horror/melodrama, things don't exactly work out for the two lovebirds. With its tragic romantic ending, "Bly Manor" trades in the same tired and harmful "kill your gays" trope that has plagued Hollywood for years — ever since Shirley MacLaine was last seen hanging by a rope in "The Children's Hour."

"The Haunting of Bly Manor" begins with the arrival of a plucky young American, Dani Clayton (Victoria Pedretti) to a grand, definitely haunted-looking manor house in the British countryside, where she's accepted a position as governess to two orphans, Flora (Amelie Bea Smith) and Miles (Benjamin Evan Ainsworth). Since their parents died in a terrible accident and their drunk uncle is nowhere to be found, the only other people on the grounds are the help. There's the absent-minded housekeeper Mrs. Grose (the excellent T'Nia Miller), kindly cook Owen (Rahul Kohli), and the earthy gardener Jamie (Amelia Eve), a rough-and-tumble sort intent on keeping to her rose bushes — until she meets Dani, that is.

The first three episodes follow "The Turn of the Screw" quite religiously, introducing the disturbed children as not-so-harmless charges. Miles is a spoiled rich kid with creepy old man tendencies, and Flora talks to dolls. In addition to the ghosts of Bly Manor, Dani has her own personal demon, a bright-eyed spectacled man she sees behind her in the mirror. It's later revealed that he is the ghost of her fiancée, who was killed just seconds after she broke off their engagement. (Presumably because she realized she was queer, though that's only implied with the lightest of touches from a rather bold seamstress.)

As Dani and Jamie's flirtation progresses, Dani cannot escape this ghost of her past. He appears in a blinding flash every time she gets close to Jamie, including their first timid kiss in the garden house. Jamie bristles at Dani's reluctance, not wanting to get played by a wishy-washy straight girl, though again she says none of that. The series ends with Dani and Jamie, framing its entire existence around their story, but sadly their romance requires a lot of filling in between the lines. The show seems to want a pat on the back for making them queer, without making anything about them very queer.

Though she ends up being a crucial figure in the series, Jamie's tragic backstory is delivered via one emotional monologue, which is shoehorned into a fireside chat and devoid of any mention of her sexuality. Owen and Mrs. Grose, the other secondary characters who have their own moving love story, both get more meaningful screen time and backstories that continue throughout multiple episodes. Even the original ghosts of Bly Manor get the entire penultimate episode devoted to their family saga, though they barely appear before then.

Read more from IndieWire: Eric Andre explains the methods to his madness on TV's most deranged talk show

In a recent interview with IndieWire, "Bly Manor" actress Kate Siegel said: "There are no rules, this is all make believe….these people could be anything, Black, white, they could be furries! There's nobody who passed a law on art. It's make believe and you can cast anybody." This is wildly reminiscent of Scarlett Johansson's now infamous comment defending her controversial attempt to play a trans man in "Rub and Tug," when she said an actress should be allowed to play "any person, or any tree, or any animal."

This kind of self-congratulatory approach to inclusive storytelling — all too rampant in Hollywood — never works; it assumes one can simply write a queer or non-white character without doing any of the work to contextualize them or flesh out their differences. What remains is a hollow nod at "diversity" that leaves its characters floating weightlessly in an otherwise straight white universe. It's hard to make an impact without being grounded in anything.

While Siegel does not speak for the show, she is married to creator Mike Flanagan and played a major queer role in "The Haunting of Hill House." That character, Theo Craine, was a hard-partying lothario who would have fit right in on "The L Word." Though she also struggled to find love, at least Theo had a gay swagger and a hot sex life. In contrast, Dani and Jamie's tepid romance and conventional domestic bliss feels like a major step backwards.

This being a horror series, there's no such thing as a happy ending, at least not one without complications. The final reveal, in which Dani unknowingly sacrifices her soul to the Lady in the Lake in order to save Flora, is a wrenching and moving twist. (OK, it's pretty queer that she takes a woman inside her, but that's another extremely close read between the lines.) The show's final image settles on the aging Jamie awaiting Dani's ghost as a hand rests on her shoulder. Is this meant to be romantic, a nod to the power of everlasting love, this lone lesbian and her dead lover?

Like the ghosts of "Bly Manor," "kill your gays" haunts us to this day. It's time to lay the "sad dead lesbians" trope at the bottom of the lake for good. Less "Children's Hour" and more "The L Word," please.

"The Haunting of Bly Manor" is streaming now on Netflix.