Progressives and power: If Trump is defeated, the real fight begins

With Amy Coney Barrett, the right won a huge victory. It will take focused, long-term activist power to defeat them 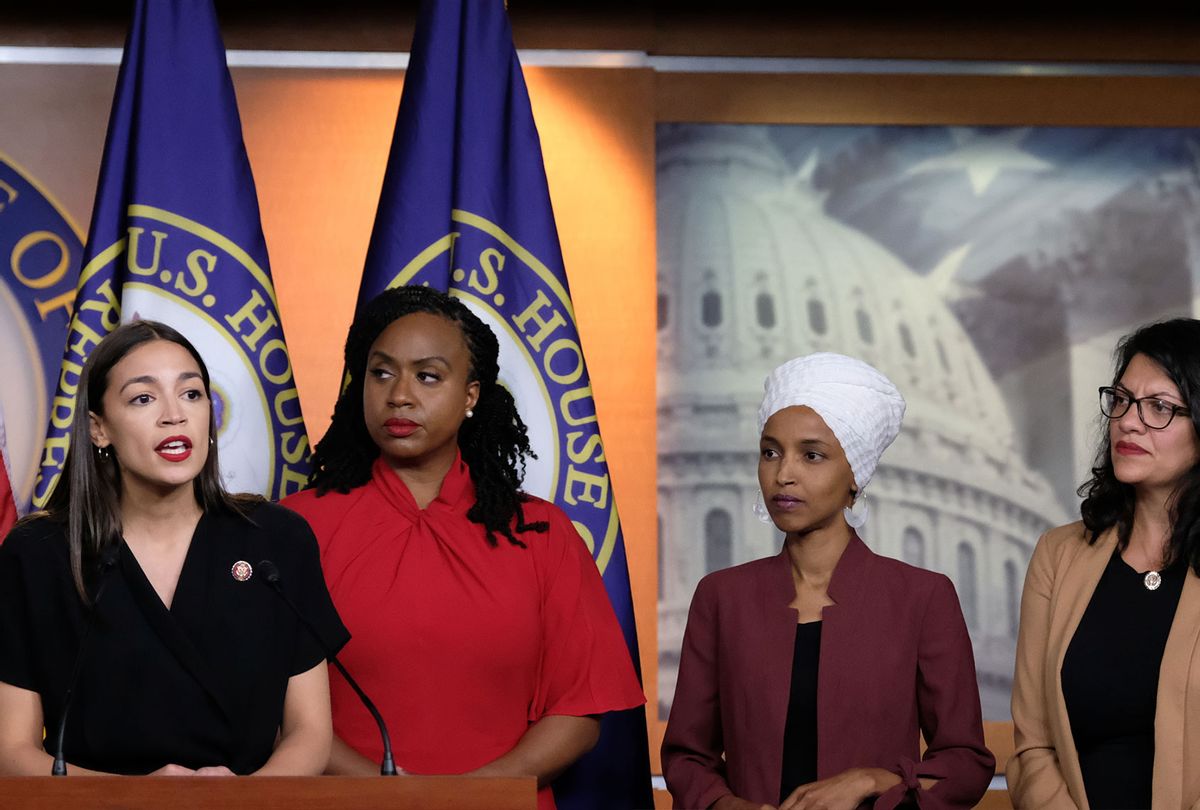 U.S. Rep. Alexandria Ocasio-Cortez (D-NY) speaks as Reps. Ayanna Pressley (D-MA), Ilhan Omar (D-MN), and Rashida Tlaib (D-MI) listen during a press conference at the US Capitol on July 15, 2019 in Washington, DC. President Donald Trump stepped up his attacks on four progressive Democratic congresswomen, saying if they're not happy in the United States "they can leave." (Alex Wroblewski/Getty Images)
--

After seeing the spectacle this week of a Supreme Court justice installed just before an election for the express purpose of tilting the result in Donald Trump's favor — and watching Justice Brett Kavanaugh's evil threat of "what goes around comes around" take shape — it's clear that the political battles we've been fighting for these past few years won't be over once the election is decided even if Trump is defeated. The fight is just going to continue on new terrain.

The question then, is how the left and the Democrats will respond. After all, they've just spent the last four years focusing their energy on taking back the Congress in 2018 and then removing Donald Trump from office in 2020. The entire center-left, and a fair amount of the center-right, has unified behind this common purpose and it's brought some impressive results. We'll soon see whether that streak continues.

The grassroots organizing in this cycle is remarkable. For instance, according to The Connector Newsletter on democracy, organizing, movements and tech, Get Out the Vote activism since August dwarfs even that of the 2018 election — and that was unprecedented. "Resistance" groups, operating outside the Democratic party apparatus, have been active all over the country.

The question, of course, is what happens to all that if they win. You'll recall that there was a ton of grassroots energy in the center left organized around Barack Obama's campaign in 2008, which was promptly squelched by a combination of top-down direction from the administration and a foolish belief among many of the faithful that their work was done and they could just trust Obama. That's the natural consequence of a "movement" that's based upon a charismatic leader.

That's not going to be an issue this time. Joe Biden is not a charismatic leader, and while people are enthusiastic about ousting the worst president in American history, they are also primed for change in a substantive way. Trump and the Republicans have exposed the rot in our system in a way nothing else could have done.

Salon's Andrew O'Hehir wrote a thoughtful piece this week about political engagement in which he makes the case that merely voting is a tepid form of activism anyway, particularly in America, where it often becomes "a bizarre form of symbolic theater or public therapy." He suggests that direct action is necessary to move the country forward and cites the civil rights movement, the in-your-face ACT UP AIDS activism of the 1980s and the anti-globalization protests of the late '90s as movements that were considered far outside the mainstream at the time but pushed their agendas much more quickly than they could have through traditional lobbying or partisan politics. He points out that the post-Parkland student movement, Greta Thunberg's climate strikers and the Black Lives Matter protesters, among others, are the rumblings of a new generation getting ready to push the envelope beyond anything we've seen.

I completely agree with this, but I will add that I think electoral grassroots organizing (carried on more by the older generation, and mostly by women) is still vital. I'm reminded of this interview with leftist organizer Norman Solomon from a few years back discussing what makes a healthy, progressive political ecosystem:

We need to occupy — literally and figuratively — congressional seats for the 99 percent. Social movements need a healthy ecology, which means a wide array of activities and manifestations of grassroots power. That includes progressives in Congress. I say on the campaign trail that we need our feet on the ground and our eyes on the stars of our ideals.

It's not good enough to have one or the other. State power matters — we've seen that from county and state offices to Washington, D.C. And as somebody who has written literally thousands of articles, 12 books, gone to hundreds of demonstrations and probably organized hundreds of demonstrations, I believe we always have to be protesting; we always have to be in the streets. It's not either-or. I want our feet on the ground to include change for government policies. Laws matter. Whether or how they are enforced matters.

If nothing else, Donald Trump has revealed just how much state power matters in this country. With no more ambition than to be worshipped by his followers and treated like a king, Trump — with the help of his conniving Republican henchmen — has managed in four short years to turn the federal government into his personal fiefdom, enrich himself and his friends, twist the rule of law for his own purposes and upend American alliances and institutions, simply because he didn't know what else to do.

Trump also finally laid bare the true nature of the Republican Party. It sees politics as war, and many or most Republicans are willing to win by any means necessary. If Trump ultimately loses the election and leaves office in January, that will only be a momentary pause in the conflict. The last four years of establishment GOP collaboration with his lawless administration, along with Mitch McConnell's manipulation of Senate rules to stack the federal judiciary with youthful, far-right extremists, shows what an exercise of raw political power can accomplish. With or without control of Congress or the White House, Republicans will hold tremendous power to impact the lives of everyday Americans for a generation.

We don't know if this upcoming election will provide a close enough result for the courts to decide the outcome, but we can already see considerable willingness to use the judicial system for crude partisan gain. Kavanaugh echoed his benefactor Donald Trump in his concurrence in the Wisconsin voting case this week, suggesting that election results should be decided on election night.

Trump is ignorant enough to think that when the networks call an election result, it's official. TV is God to him. But in reality, elections are never certified on election night. Kavanaugh knows this. He was one of the Bush v. Gore lawyers who argued that absentee ballots should be accepted as late as Thanksgiving. He was acting as a partisan hack then, just as he is now. (And doing a sloppy job of it.) This is a preview of what we can expect Republicans to do whenever they get the chance.

When Rep. Alexandria Ocasio-Cortez, D-N.Y., endorsed Bernie Sanders in the Democratic primary campaign, she said it was because she wanted to be part of a movement. And so she is. She is one of the new generation of progressive leaders who is also, as Norman Solomon said in that interview I quoted above, "occupying" a seat in Congress. She has learned very quickly that if the movement is to accomplish anything, state power is essential.

AOC is both inside and outside, as are many of the new progressives in Congress, most of them women and several of the most prominent women of color. They will need the passion and numbers of outside movements to help them leverage their power on the inside. If they can do that effectively they may end up showing the Republicans, and the world, what a government that's actually responsive to the people looks like.