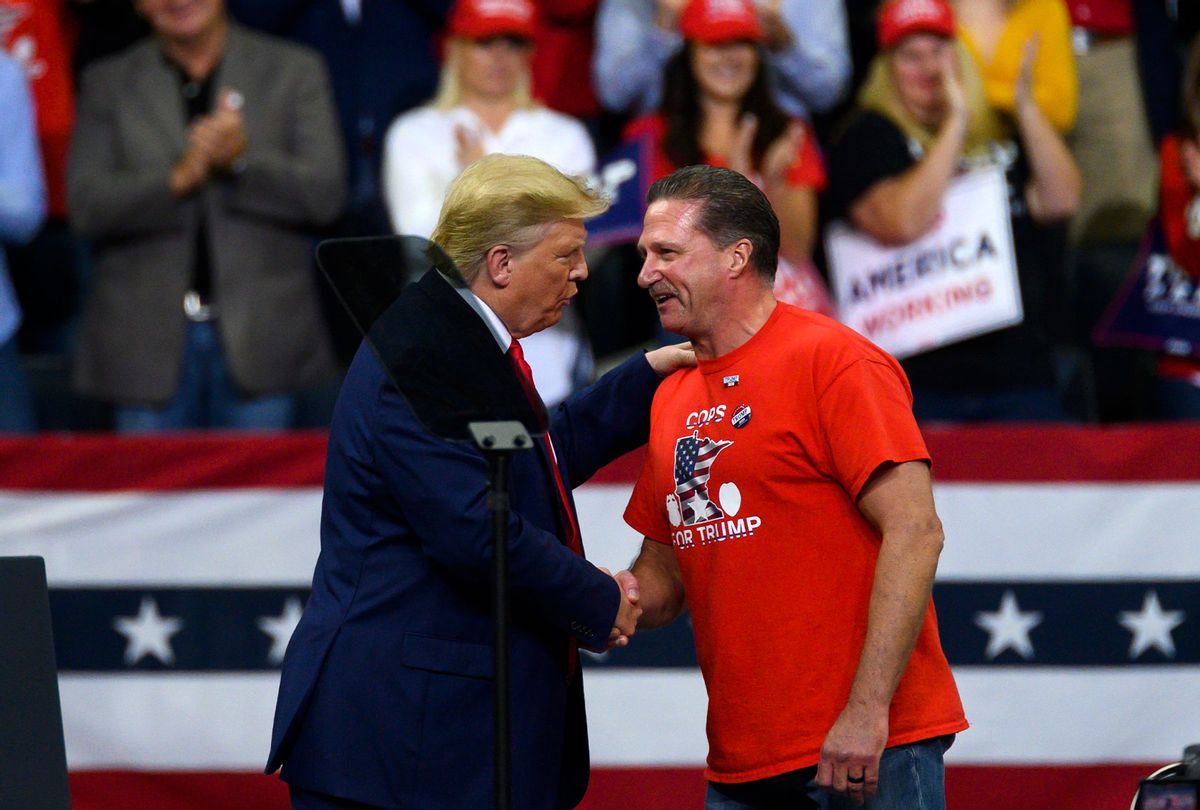 U.S. President Donald Trump shakes hands with Minneapolis Police Union head Bob Kroll on stage during a campaign rally at the Target Center on October 10, 2019 in Minneapolis, Minnesota. The rally follows a week of a contentious back and forth between President Trump and Minneapolis Mayor Jacob Frey. (Stephen Maturen/Getty Images)
--

Minneapolis Police Federation President Lt. Bob Kroll passed on a request from the campaign to members, asking them to "share" and "[write] me if you are willing to assist," according to a copy of the email obtained by the outlet.

The request seeking 20 to 30 former officers to serve as "poll challengers" in "problem" areas came from William Willingham, a senior legal adviser director of Election Day operations for the Trump campaign.

"Poll Challengers do not 'stop' people, per se, but act as our eyes and ears in the field and call our hotline to document fraud," Willingham wrote in an email to Kroll. "We don't necessarily want our Poll Challengers to look intimidating, they cannot carry a weapon in the polls due to state law . . . We just want people who won't be afraid in rough neighborhoods or intimidating situations."

Kroll previously spoke on stage at a Trump rally and has echoed the president's rhetoric about Black Lives Matter protests in the wake of the death of George Floyd in police custody.

"To the extent that Bob Kroll wants to participate in a voter intimidation campaign, the city will take that very seriously," he told The Star Tribune. "There's the clear dog whistle of 'rough area,' and we need people who aren't 'easily intimidated' and people who aren't scared."

Minnesota law allows poll challengers to "challenge" another voter's eligibility "if and only if they have personal knowledge of that voter's ineligibility."

"Suspicion is not a basis for making a challenge," the secretary of state's office says on its website. "The challenger must personally know that a specific person is not eligible to vote for a specific reason."

The request to the police union came after Keith Ellison launched an investigation into an out-of-state security firm that put out a call recruiting former U.S. Special Operations personnel as armed guards to "make sure that the antifas don't try to destroy the election sites."

"Minnesota and federal law are clear: No one may interfere with or intimidate a voter at a polling place, and no one may operate private armed forces in our state," Keith Ellison said in a statement. "The presence of private 'security' at polling places would violate these laws. It would make no one safer and is not needed or wanted by anyone who runs elections or enforces the law."

The Trump campaign denied any involvement with that effort or with armed guards who set up watch outside of a Florida polling place last week.

But the Trump campaign and Republican National Committee have long worked to recruit some 50,000 "poll watchers" after a federal court lifted a decades-long ban imposed on the national GOP after repeated instances of voter intimidation.

Republican officials said about 3,000 people have already volunteered to take part in the effort in Minnesota, according to The Star Tribune.

The efforts have sparked concerns about the potential of voter intimidation, particularly after Donald Trump Jr. filmed a campaign ad urging supporters to join an "Army for Trump's Election security operation" to prevent the "radical left" from trying to "steal this election from my father."

Kristen Clarke, the head of the Lawyers' Committee for Civil Rights Under Law, said the statements show that "intimidation is now public and planned."

Clarke's group has recruited 23,000 legal volunteers to assist voters who report voter intimidation at their nonpartisan hotline at 866-OUR-VOTE.

"While these incidents are deeply troubling and demonstrate a rising pattern of voter intimidation, it is vital that we do not allow them to succeed by cowering in fear," she wrote. "There will undoubtedly be scattered incidents of attempted voter intimidation between now and Election Day — but we can fight back."