"Trump's wall is based on a ridiculous fantasy": Scott Snyder on how reality is scarier than fiction 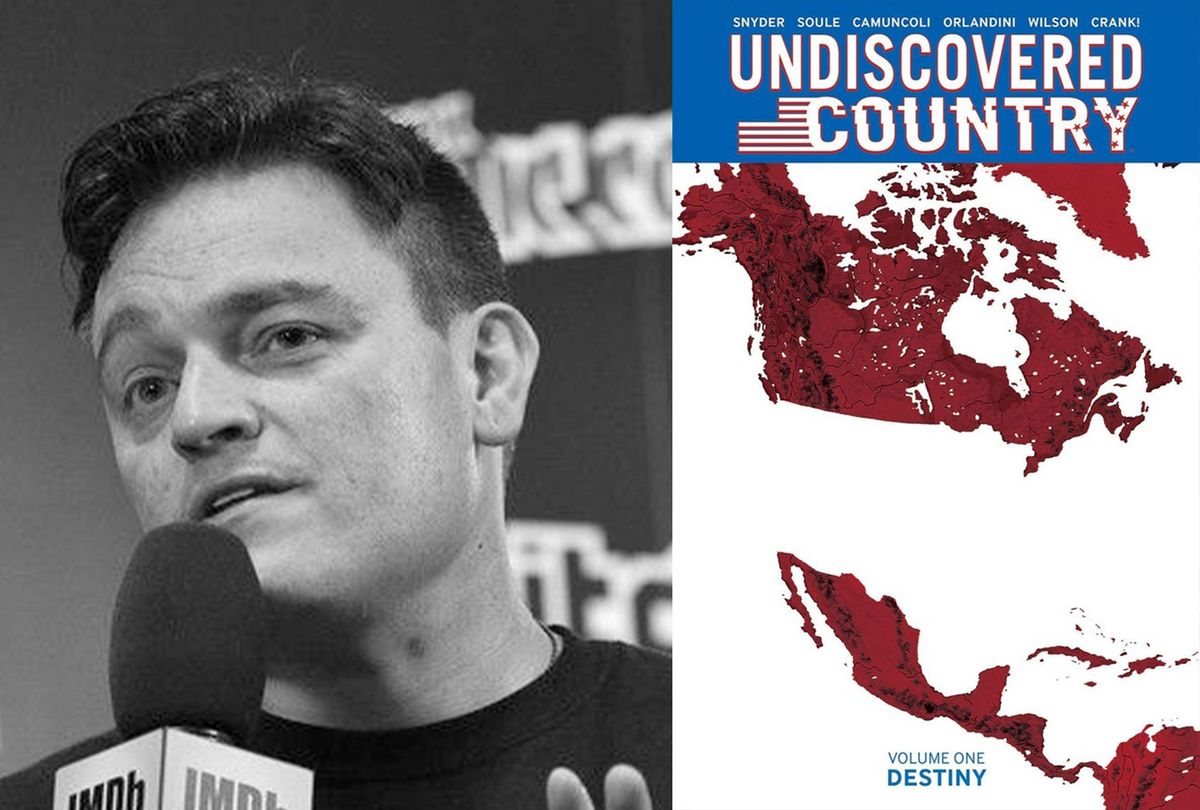 Because they share his values, Trump's followers will at some future date flock to his "wall" as a type of monument to his and their "greatness." Even if Trump is somehow removed from office on Election Day and then steps down in January, his power over his cult will endure and perhaps even grow stronger.

Trump's "wall" reveals that American Exceptionalism is fully a sham and a lie. How? Building walls is one of the primary means through which the leaders of authoritarian, fascist, and other failed societies try to maintain power and project strength.

Donald Trump, the American fascist, did not make America great as he promised. Instead, Trumpism dragged America further down into the gutter of mediocrity (if not worse) among nations.

There is also the dark if not tragic irony of Trump's "wall": because of the Trump regime's wielding of the coronavirus as a type of political weapon against the American people, the country is an international pariah, a type of leper nation. Thus, Trump's "wall," both literally and metaphorically, is a way of keeping the American people stuck inside their own country.

These events – where a once great (if not the indispensable) nation is ruled by a reality TV show fake billionaire who is a fascist authoritarian political cult leader, there is an uncontrolled plague, political violence and talk of a Second Civil War are escalating, a right-wing coronavirus Christian extremist death cult is gaining even more control over the country and its people, science and reality are being undermined by Trumpism and its followers, and a wall is being built along the U.S.-Mexico border while brown and Black people languish in Trump's concentration camps and detentions centers – is an unbelievable story made very real.

Award-winning author Scott Snyder imagined such a world long before Trump came to power. His new graphic novel "Undiscovered Country" (with co-writer Charles Soule) is a thrilling and surreal journey through a future America where time itself is broken, the country is surrounded by a huge wall that has isolated it from the world for decades, and a plague has ravaged the Earth – and what was once the United States may be the last hope for humankind's salvation.

"Undiscovered Country" explores what it means to be "American" and the myths, dreams, and stories that Americans share and tell themselves. In all, "Undiscovered Country" is a commentary (intentionally or not) on the madness of Trumpism and an almost therapeutic lens into the collective imagination of a very young country, one that is still very much a work in progress and continually (re)inventing itself.

In this conversation, Snyder reflects upon emotions and life in the Age of Trump and the pandemic as well as the ways that "Undiscovered Country" speaks to an American present dominated by extreme social and political polarization and other forms of division. He also shares his thoughts on the anxieties and challenges of writing a graphic novel series that is so timely and topical.

What does it mean to be "American"? And what is the dream of America versus the reality of it?

What it means to be American right now is extremely complicated. There are times I do not know what to think about that identity right now given all that is happening in this country with Donald Trump and all the other horrible things that are so upsetting and infuriating. But again, in this same moment there is also so much to be proud of.

"Undiscovered Country" is set in the far future but is grappling with science run amok, a pandemic, information silos and alternate realities, propaganda, right-wing Christian extremism, civil war, cults of personality, authoritarianism, and omnicide. The graphic novel was released before the coronavirus pandemic swept across the United States. Were there moments with "Undiscovered Country" where you felt that it was too topical? Where somehow readers would reject the book because it felt all too real?

We surely did. We are working on the screenplay for "Undiscovered Country" right now. One of the questions we went to our parent company New Republic with is, "Should we tamp down the pandemic aspect?" We had another idea to use instead of a pandemic because we worried the story would be too on the nose. New Republic responded with, "No, we want the story to be what it is."

One of the ways to work through the anxiety and concerns about the graphic novel being too topical was to lean into "comic book lunacy." Part of the fun with "Undiscovered Country" was pitching the story as a type of wild "Land of the Lost"-type adventure story through a mysterious America with all of its different territories and biomes. Some of the different parts of this new America even move at different speeds through time itself. Some of them are 100 years in the future, some of them are 30, so it is that crazy. "Undiscovered Country" is ultimately a propulsive emotional soap opera and action-packed series which explores different aspects of American values and ideologies through an extreme presentation of them.

Is America a schizophrenic country? Considering all this talk of a second Civil War in the Age of Trump, conservatives, and other members of the right-wing with their conspiracism and lie-filled echo chambers, and of course Trump himself who is a pathological liar, the country feels like it is being torn apart at the seams. Too many Americans are not living in the same reality although they are ostensibly in the same country.

There is a period in the history of this version of America where a great migration takes place. Different parts of the country are freed to do what they want. Some of those areas of the country have very little if any government regulation. It really is "live free or die." There is another zone where it is organized more communal principles and has government protections. Over time those zones end up at odds with one another and go to war. And because time is moving faster outside of the United States than inside of it all of these events take place over 100 years.

What does the wall that surrounds and isolates America in "Undiscovered Country" represent literally and symbolically?

The wall represents a complete willful desire to block out any kind of opposing view. The wall means a desire for a complete subjective power over reality, blocking oneself out from the world. Building a wall, metaphorical and literally, it is about separating and isolating oneself. The wall is not about protecting yourself from real danger. It is really about keeping away uncomfortable ideas that may challenge your ideas and way of living.

Walls trap people inside. America in the Age of Trump and his pandemic is literally a pariah nation where its citizens are not welcome in most countries.

Trump's wall was intended to keep people out. It is based on a ridiculous fantasy. Then Donald Trump ends up building walls and gates around the White House. In America with Donald Trump we the American people are all literally locked in because of his behavior.

You have written graphic novels such as "Batman," "American Vampire," "Swamp Thing," "Justice League," and many other award-winning series and books. Given the grand ambition and scale of the story, could you have written "Undiscovered Country" in your 20s or 30s and been successful?

No, I do not think that I could have done "Undiscovered Country" back then. There is so much that is intimidating about such a grand story. My co-writer Charles Soule is a great help. I do not believe that there would have been the 50-issue plan for the story without his wisdom and experience. Ultimately, I could not have made "Undiscovered Country" without the creative team of Charles, Giuseppe Camuncoli, Daniele Orlandini and Matt Wilson.

One person's dystopia is another person's utopia. We see this with the cruelty and evil of Trump's regime where people of conscience are appalled by what is happening to the country while members of the right-wing and the plutocrats believe that these evils and damage are great and good things.

That is central to what we are exploring in "Undiscovered Country." There are ideas and worlds and realities and experiences that are supposed to be wondrous, but they come into being at the expense of other people. Those utopias are built on the suffering of other people. Grappling with the selfishness, harm and pain of utopias and efforts to create them is a theme in the final arc of my graphic novel "American Vampire" for example. It is all over "Undiscovered Country." The theme is also present in my forthcoming graphic novel "Nocterra."

Given the malignant reality and surreality that is the Age of Trump where one unbelievable thing leads to another one, even more abominable and heretofore unimaginable, could you have written such a story? Would anyone have bought it?

For all the starfish and flying albino buffalos, oversized prehistoric fish monsters, and the many fantastical things in "Undiscovered Country," our reality is far more alarming, strange, and terrifying right now.