Shunning masks is a central sacrament of the Trump cult: Reason can't compete with faith

Trump's followers believe their leader has given their lives meaning. It's public health versus mass delusion 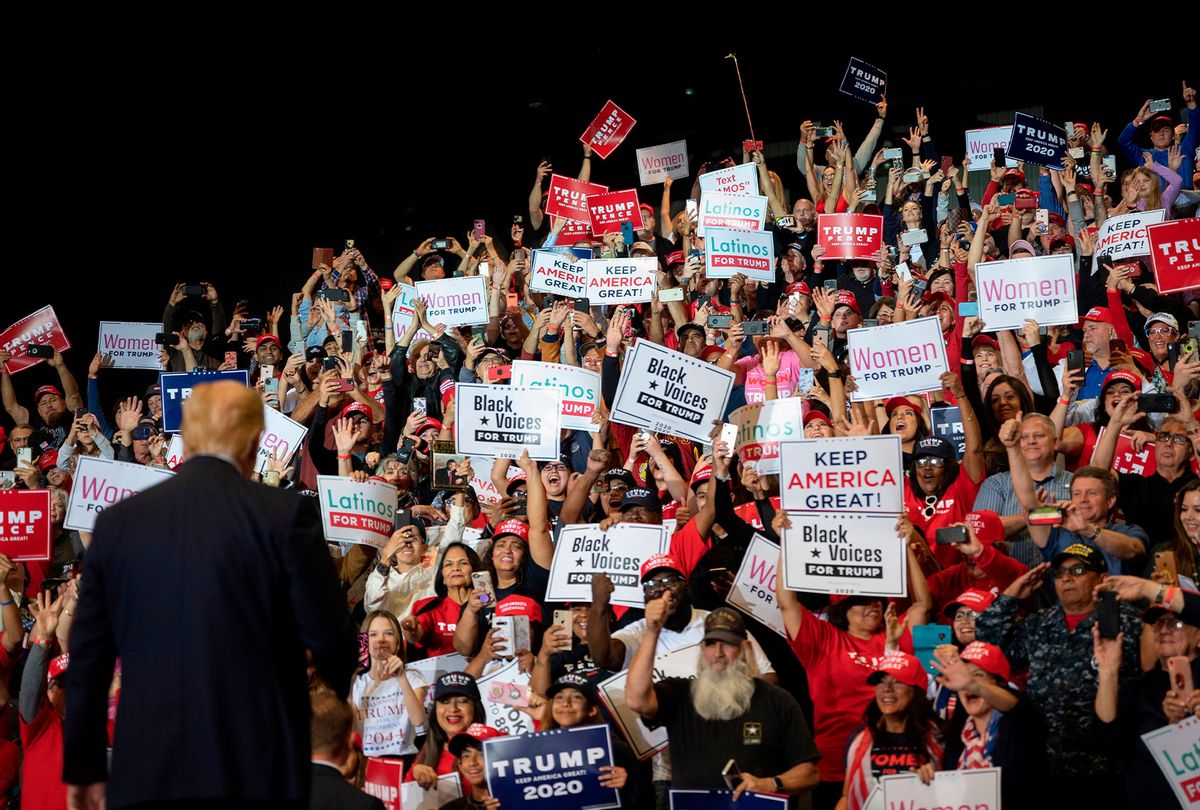 Within the next few days, we will pass a grisly benchmark: more than 200,000 Americans dead from the coronavirus. Public health experts predict that number may rise to 400,000 by the end of the year. If the Trump administration pursues a "herd immunity" strategy, where the disease is allowed to spread unchecked throughout the country, then millions of people may die.

It is clear that wearing a mask that covers one's mouth and nose is the easiest way to slow the transmission of the coronavirus. If a national mask mandate had been instituted across the United States in March, many thousands of lives would have been spared, and the country's economy might not now be in ruins.

Why then do so many Americans refuse to wear masks during this pandemic?

Social scientists and other researchers have reached several preliminary conclusions.

Researchers have also found that people who exhibit the "dark triad" of behavior and personality traits (Machiavellianism, narcissism and psychopathy) are also more likely not to wear masks as compared to others.

Among men, a refusal to wear a mask is connected to a sense of fragile and embattled masculinity, in which masks are viewed as being "weak" and "feminine" and "not cool." For such men who lack confidence in their sense of self and overall identity, not wearing a mask is a selfish act which they view as strength and perhaps as evidence that they are "alpha males" who can win a primitive test of "survival of the fittest."

In Scientific American, Emily Willingham suggests that masks are also viewed as a "condom of the face" by men who are afflicted with "toxic masculinity":

So, they go maskless. In doing so, they expect that their masculine ideology group will accept them, respect them and not reject them.

The irony is that these men think they're manifesting the ideal of the rugged, individualistic American, when their refusal really traces in part to a fear of what other people will think about them. Drunk on a toxic brew of self-interest and that masculine ideology, they mistake their refusal to protect themselves and others as a mark of character when instead, it's a mark on their characters.

Moving from the general to the specific, what is known about the relationship between wearing a mask during the coronavirus pandemic and a person's political values and beliefs?

Unsurprisingly, political partisanship and support for Donald Trump and the Republican Party is highly correlated with refusal to wear a mask and opposition to other public health initiatives which are intended to stop the pandemic.

Such thinking and behavior also reflect the fact that Trump supporters, Republicans, and other conservatives exist in a media echo chamber which has assured them that the pandemic is a "hoax" or "fake news" crafted by liberals and intended to hurt the Trump administration. As has been repeatedly shown by media scholars and other researchers, the right-wing echo chamber is a system ruled by epistemic closure in which incorrect information, outright lies and conspiracy theories dominate. As is often cited, viewers of Fox News actually know less about empirical reality and the world as it relates to current events than people who watch no news programs at all.

The politicized quality of wearing a mask is the result of extreme asymmetrical polarization in which movement conservatives, leading Republicans, right-wing news media, white right-wing evangelical churches, and other influential figures on the right have politicized broad areas of public and private life — to the point where basic questions of public health and the common good are transformed into partisan issues of personal identity and the self.

Donald Trump leads an authoritarian cult of personality. Given that, his ability to influence the thinking and behavior of his followers is extreme.

Trump's repeated suggestions that his followers should not wear masks, should feel free to ignore social distancing rules and attend his rallies, and should even take up arms against Democratic officials such as Gov. Gretchen Whitmer of Michigan have a direct and measurable impact on public health by encouraging the spread of the coronavirus.

But Trump's power over his followers reveals something much more dangerous and troubling about American society than "just" the coronavirus and its season of death — and even more than the underlying social inequalities and pathologies that made this pandemic so much worse than it should have been.

Beginning in the 1980s, American conservatism has morphed into a type of religious politics in which fact and reason have been subsumed by faith. This manifests in many ways: anti-intellectualism and anti-rationality, racism and white supremacy, hostile sexism and misogyny, a worship of ignorance and greed, right-wing Christian fundamentalism, a disregard for truth and empirical reality, and contempt for expert knowledge.

At its root, faith is a belief in that which cannot be proven by empirical or other ordinary means. The Republican Party's policies on taxes, the environment, social inequality, education, public health and other issues (tax cuts pay for themselves!) are rooted in faith. They are easily refuted and disproved by the empirical data. In practice, that makes no difference to those who are true believers.

If today's American conservatism is a type of religious politics, then Trumpism is one of its most dangerous sects and a de facto cult. In the age of Trump, refusing the mask is a form of sacrament, a political-religious symbol that signifies loyalty to Donald Trump and his movement.

Authoritarianism and other fake populist movements gather power through their ability to transfer the leader into a type of godhead, an extension of an embattled and fearful self that is made immortal through loyalty to the Great Leader. Moreover, authoritarianism — and fascism in particular — is a type of death cult where the followers will willingly sacrifice themselves for the greatness of the Leader. Trump's followers, as their predecessors did in Germany, Italy and elsewhere, are prepared to kill or die for their leader.

At the heart of Trumpism is a form of existential angst, what is a fundamental crisis of meaning and human value.

Because of my background in ancient religion and culture I have special reason to be alarmed by the frequent references to the psychopathology of the president and his followers as a "cult." Not that I find these references misleading — on the contrary, they contain a truth that's more dangerous than we may realize.

I'm old enough to remember "the Jonestown massacre" of November, 1978, in which some 900 Americans committed what they called "revolutionary suicide" at the behest of a deranged demagogue. After the horrific event sunk in, I could not stop asking myself, "How could 900 presumably educated, mature adults, poison themselves — and in some cases their own children — and do it for such an obvious egotist? What was wrong with them? What were they lacking?"

Strangely no one seemed to be asking this obvious question.

The question, Nagler continues, "has come back to haunt us with greater urgency. But this time it's not just a circle of deluded followers — it's the whole country that's at the mercy of an egotistical demagogue. ... And the cup he's offering is not cyanide but ecocide: the extinction of all life on earth. ... As we know from the nightmare of Nazism, when the 'leader' supports the delusions, the conspiracy theories of a deluded element in the society, as the current president is doing, the combination can reach extremely dangerous proportions."

At the Wire, cultural theorist Sibaji Bandyopadhyay explained the role of collective narcissism and sadism in attracting profoundly damaged people to neofascist movements and political cult leaders like Trump:

It is therefore quite feasible to imagine that at certain historical conjunctures there may arise situations in which the vacuous ego of one megalomaniac succeeds in superimposing itself on many an ego by the conduit of primary narcissism. And indeed, the 'art' involved in the deal offered by Donald Trump is squarely predicated upon what may be termed transactional narcissism. In this scenario, to use the formula of Freud, people accept Trump as their "high ego-ideal" and "exchange [their] narcissism for homage to [it]". In short, it is not a tale of isolated, solitary self-love but that of interdependence and reciprocity: rising to the level of being a fully-exposed syndrome, Trump's Other-abjuring narcissistic persona both feeds on and flares up the mostly latent similar sort of narcissism of the mostly forgotten masses.

But, this is not all.

Whoever courts an ego-ideal, secretly pines for the tantalizing interplay of pleasure and pain. By transferring primary narcissism to the safe-keeping of some supposed strongman, more often than not, s/he automatically takes on the role of being passively active in some theatre of sadomasochism.

As journalist Bob Woodward has recently revealed, Donald Trump knew from the beginning that the coronavirus was lethal, not a hoax. Trump simply chose to lie to the American people about the pandemic, as well as to actively sabotage relief efforts, and in doing so committed a crime against humanity. Trump's political cult members are not moved by these facts. They continue to gather at his command at rallies where thousands huddle together unmasked to bask in the glorious revelation of his presence. At Trump's rally last Sunday in Nevada, thousands of his followers actually ran into the arena, as though they were on fire with joy.

It was perhaps too irresistible to liberal schadenfreude, this image of Trumpists enthusiastically running into a pandemic petri dish as though it was the healing fountain at Lourdes.

To those outside the Trump cult such behavior makes no sense and is just further proof that Trump's followers are human "deplorables" – in this example fulfilling their role as human bioweapons for Trumpism.

But such an analysis ignores the power of Trumpism and today's version of "conservatism" as a type of religious politics. Trump's followers run toward death because he and his movement are providing them with emotional nourishment and meaning in their lives.

Trump's neofascist movement will not disappear even if the Great Leader is voted out of office on Election Day and decides to step down. Such people will just latch onto another American fascist and demagogue, in whatever form he or she may take. Decent Americans may see the Trumpists and others of their ilk as tainted, but they themselves feel touched and empowered. In living the faith of their right-wing political religion, Trump's followers have found "salvation" through a leader who is simultaneously "like them" but is also a type of semi-divine prophet whose example they aspire to imitate or emulate.