On Trump, masks and masculinity: What the president's bare face really reveals

Trump's refusal to wear a mask tells us plenty about his masculinity, but it's not what he wanted to show 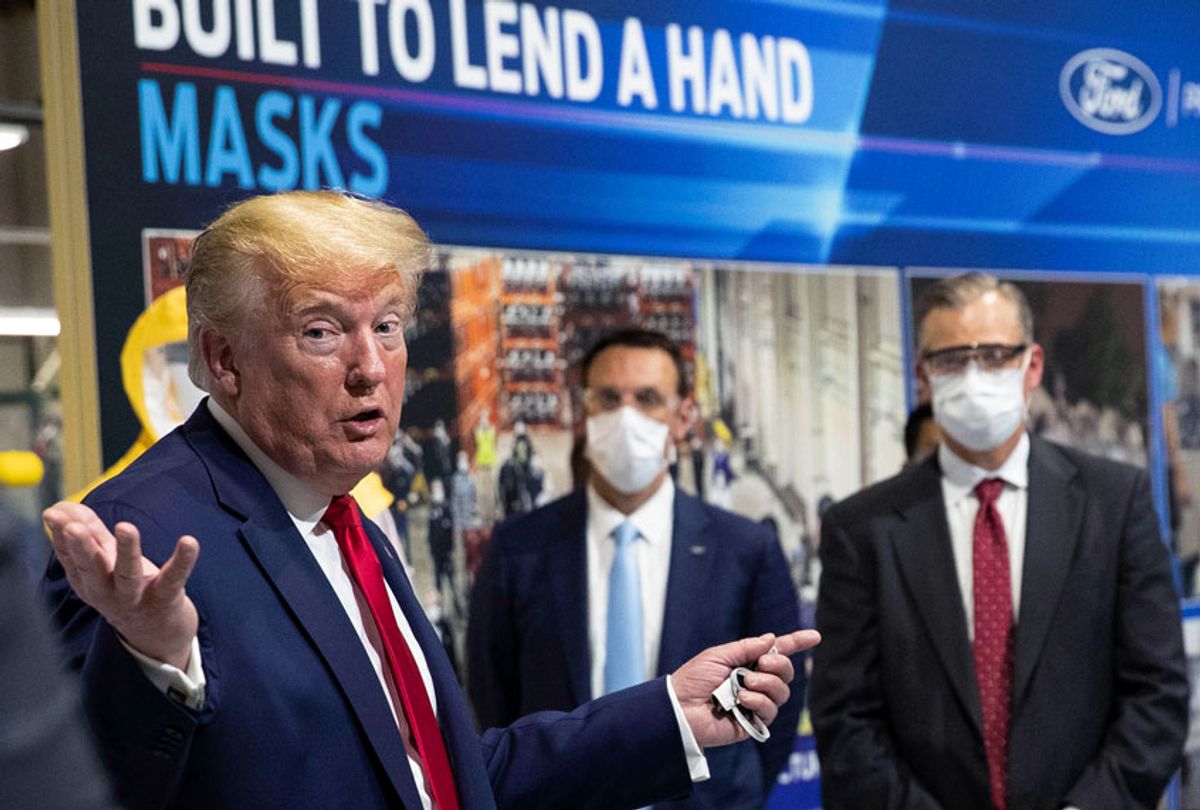 President Donald Trump speaks as he tours Ford's Rawsonville Components Plant that has been converted to making personal protection and medical equipment, Thursday, May 21, 2020, in Ypsilanti, Mich. (AP Photo/Alex Brandon)
--

On Thursday, President Trump visited a Ford manufacturing plant in Ypsilanti, Michigan. The state's Attorney General, Dana Nessel, had requested that Trump comply with the plant's policy that all visitors wear face coverings. The President did not abide. Trump explained that while he briefly wore a special presidential face mask backstage, he "didn't want to give the press the pleasure of seeing it."

Thursday's event was the most recent of a series of public appearances in which the President has tried to promote reopening of the country, including schools, sports, and, of course, businesses, in an attempt to jump-start the stagnant economy. And his deliberate public promotion of the nation's reopening without wearing a mask, despite federal guidelines, is only his latest and most conspicuous artifice — perhaps his greatest mask to date.

The President has received consistent media attention over the past two weeks for his maskless public appearances, and most commentators have treated his actions through a familiar lens: a president who wants to convey vigorous strength, manly courage, and bold confidence as he convinces a wary public to go back to business.

I think that perspective misses the point about Trump, his masculinity, and, perhaps most importantly, his artifice. While the rest of us wear masks as we shop for groceries and venture to medical appointments, Trump has chosen to mask reality by opting against a face covering. He continues to obfuscate science, obscure the truth, and attempt to hide behind a veneer of carefully crafted masculinity — and he certainly does not need a protective mask to do so.

As we navigate the COVID-19 pandemic, we have donned the artifice of masks, altered our routines, gone without haircuts, missed important milestones with our loved ones. We have learned much about ourselves — our breathing, our imperfect appearances, our priorities.

And as Trump shamelessly promotes the reopening of the economy while refusing to wear a mask, his behavior explicitly shows his artifice, making his insecurity painfully clear. As many have pointed out, he's determined to put forth confidence in the nation's reopening. In discussing the President's refusal to wear a mask, Chris Cillizza of CNN claims that Trump "wants the image that the public gets of him to be that of a strong and fearless leader." On Thursday, Trump presented this façade as "Built Trump tough."

Does anyone really believe that a man who endlessly belittles others, eschews responsibility, refuses to cooperate with people who do not remain endlessly loyal, threatens the expansion of democracy, and openly suggests that people may need to sacrifice their lives to jump-start the economy is strong and fearless? Or, to put it another way, is anyone who is not already determined to adore Donald Trump — even if he were to "stand in the middle of Fifth Avenue and shoot someone" — really convinced that a man who denigrates from a Twitter app is strong or fearless? A bully, sure, but everyone who survived middle school remembers full well that bullies are scarred with fear and rely upon artifice, often techniques they learned from their parents.

As Trump completed his trip to the Ford plant in Michigan, a battleground state he has targeted with his Twitter attacks—both against the governor's leadership and distribution of applications for mail-in ballots—we saw Trump's artifice on full display. He was petty, spiteful, and theatrical; he claims he donned a mask backstage and then removed it for the press.

We need to recognize the artifice of Trump and not reinforce his behavior with the kind of rhetoric that only fuels his performance. Jackson Katz, for example, recently addressing the mask issue, claimed "Donald Trump is simply not man enough to be president of the United States." For Katz, this claim "defies conventional wisdom" that upholds Trump as "a prototypical alpha man."

Katz echoes many of Cillizza's points on Trump's bravado, but superficially engages with feminist work that has exposed the artifice of men's behavior, especially powerful men like Trump. And Katz ultimately adopts the demeaning, phallic, even bullying language we might associate . . . well, with Trump, as he ends his piece by concluding that "the most powerful man in the world is such a small man, utterly incapable of rising to the occasion."

We need to rethink the question of masculinity and the mask. While we may think the absence of the mask exposes truth, we are all dependent on artifice, and men, perhaps more than ever, need to acknowledge our artifice, our dependencies, our insecurities that reveal the truth of who we are, especially in this moment of great vulnerability.

Artifice helps to mask our fear. Cosmetics might cover up our imperfections. Acting as a bully can hide our insecurities. Trump's refusal to wear a mask obscures the realities of the pandemic, including the missteps of his leadership and the gravity of the nation's — indeed, the world's — loss. Trump's refusal to wear a mask tells us plenty about his masculinity, but it's not what he wanted to show.