Trump is a brilliant performance artist: We can't defeat him without understanding that

Trump has played a character so long there's no real person anymore: That's what makes him so powerful, and evil 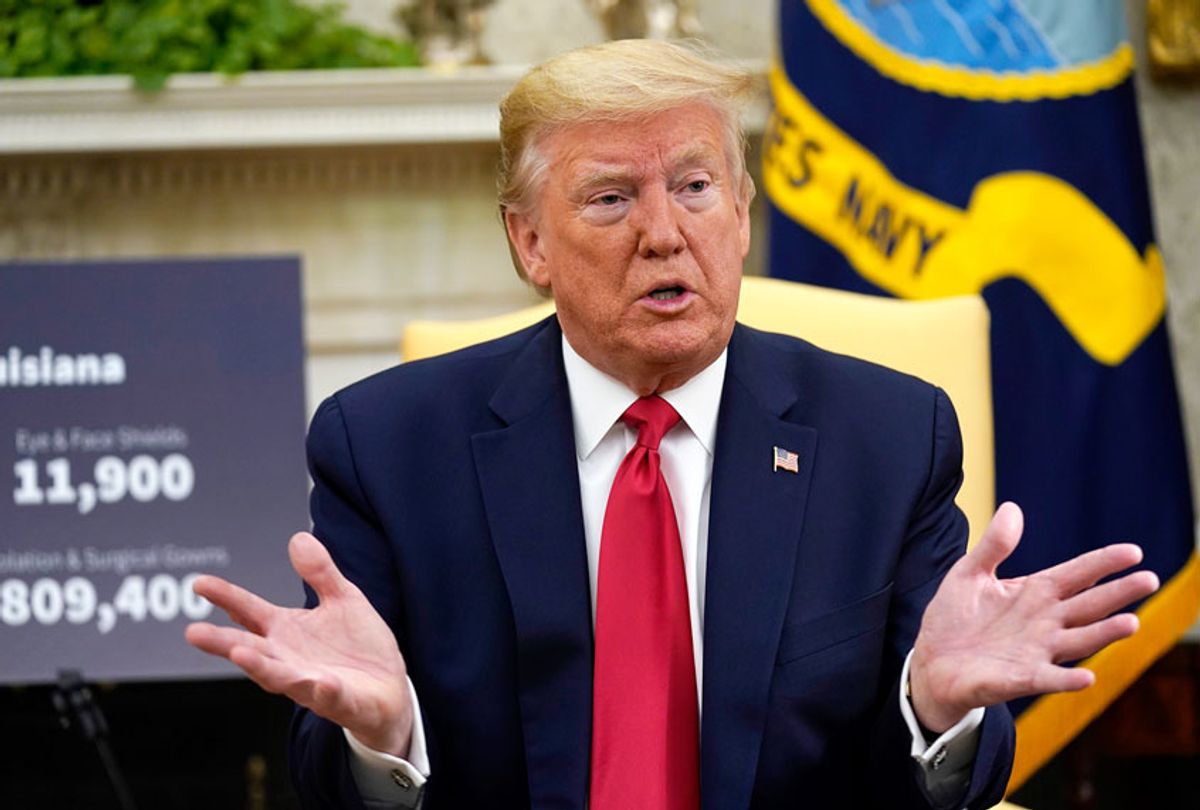 During his White House briefing last Thursday, Donald Trump appeared to channel the Rev. Jim Jones, infamous leader of a 1970s death cult. Trump suggested that powerful emissions of light could perhaps cure people who are infected with the coronavirus, and continued by speculating that disinfectants could also be a possible cure:

And then I see the disinfectant where it knocks it out in a minute — one minute — and is there a way we can do something like that, by injection inside, or almost a cleaning? Because you see it gets in the lungs and it does a tremendous number on the lungs, so it would be interesting to check that.

Of course, Trump backpedaled the next day and said he was being "sarcastic" because the news media is always so "unfair" to him. After being rebuked by any and all rational and intelligent humans for his suggestion that toxic cleaning solutions and light could perhaps cure the coronavirus, Trump then had a public temper tantrum that lasted most of the weekend. He ranted and raged on Twitter about hamburgers, the "Noble" prize, his repeated claims that he is the hardest working president in American history, the non-existent "coup" attempts by Democrats, the "mean" treatment he gets from journalists and various other grievances.

How did the mainstream American media respond to Donald Trump's suggestion that people should be turned into poison-drinking human lightbulbs to treat the coronavirus?

Some mainstream news outlets condemned Trump, making clear that his statements were dangerous and could kill anyone stupid enough to ingest disinfectant. One "journal of record" defaulted to blatant "both-sides-ism" in an effort to salvage Trump's statements as evidence of him "improvising" and "thinking outside of the box," implying there is room for disagreement about the president's deranged statements. A fair number of news outlets chose to report Trump's suggestions in a relatively neutral way, without context and condemnation. Of course, the pro-Trump propaganda media found ways to defend him.

In total, almost five years since Donald Trump launched his presidential campaign, the American news media continues to demonstrate that it does not understand who or what he really is.

The news media's primary shortcoming of inference and reasoning: What Donald Trump says does not matter as much as how he says it. To focus almost exclusively on his words, and not his style and presentation, is to not understand Trump's cult-like hold over his followers and larger movement — and the danger he and they represent to the United States and the world.

Here's a first principle: Donald Trump is a character who is playing the real-life role of president of the United States.

In that role, Trump is compulsively watchable, both for those who hate him and his cult members who slavishly adore him. As shown by his fake coronavirus press conferences — which exist primarily to fuel his malignant narcissism and megalomania — Donald Trump is like a tractor-trailer with no brakes, on fire, and carrying volatile explosives as it careens down a steep hill, its driver asleep at the wheel.

We watch because we have to know what happens next: The destruction is both thrilling and terrifying.

In so many ways, the riddle of Trump (one that is actually easy to solve) is best understood and deciphered through the lens of performance studies and cultural studies, not through the tenets of traditional journalism.

Why do so many in the traditional news media insist on applying old habits which are better suited for a more traditional president in more normal times? Because they have failed to adapt to a fascist authoritarian president at the head of a failing democracy that is struggling with a pandemic and other disasters both manmade and natural.

There is also considerable reluctance, not to mention fear, to admit that the Trump regime, the Republican Party, their media and their followers represent a neofascist authoritarian movement. If Donald Trump were the leader of a foreign country, the American news media, looking at exactly the same behavior from the same man and the same movement, would be offering a radically different narrative about the age of Trump.

The news media wants access to the president. As an institution, it is part of the power elite, not separate and apart from it. One cannot reasonably ignore that "news" about this president has generated billions of dollars in advertising and other forms of revenue. So there is a powerful incentive to seek alternative explanations for Trump's vile behavior and that of his followers and political allies.

Too many people in the news media still assume that Donald Trump is a somewhat normal human being who has only the best of intentions towards the American people. In fact, the vast abundance of public evidence shows him to be a deeply pathological person, with little care or concern for other people.

In his new book, "Trump and Us," political scientist Roderick Hart explains why the American news media appears unable to fully comprehend Donald Trump and what he represents:

To this day, most journalists cannot understand how Donald Trump became president. The values they cherish — pursuing the truth, disclosing the facts, balancing different points of view — are values that Donald Trump routinely dismisses. Journalists are idealists, people who respect the Grand Virtues — justice, equality, fairness, reliability. Trump, in contrast, is a working postmodernist who markets the truth layer by layer and who sees the Grand Virtues as a dodge for undermining him.

What is the best way to understand Donald Trump, the human character and persona?

Trump is perhaps one of the greatest performance artists to ever live. He is of course a human being. But he has played a role for so long that somewhere along the way the real Donald Trump became subsumed in the performance.

He has great comedic timing. His facial expressions, his body language, his crudeness, his unvarnished lack of self-awareness, his pure unrestrained id, his obvious failings of character and intelligence, his greed and shamelessly immoral behavior are, considered as a whole, hilarious.

Such an observation is not an excuse or mask for Trump's evil, malfeasance and cruelty. A person can exemplify the worst of humankind while still being an extremely skillful performer.

In his bestselling book "Fire and Fury," Michael Wolff explains the appeal of Donald Trump this way:

There is no one great single influence which informs Donald Trump's performance style: he is not that self-aware or studied. Trump's genius performances are the stuff of a savant. His buffoonery is effortless because it reflects the true self.

But there are antecedents and predecessors for the comic persona that Trump inhabits.

In a 2016 Newsweek essay, Zach Schonfeld observed that Trump seemed like a new iteration of the comedy great Andy Kaufman:

This is a weird theory, but bear with me: Donald J. Trump is Andy Kaufman wearing a disguise….

The Kaufman theory hinges on the notion that Trump's bid for the presidency is so outlandish — the gaffes, the boasts about penis size, the policy reversals and white nationalist overtures — that it must surely be performance art. More specifically, the work of Andy Kaufman, an idiosyncratic figure who yanked performance art in bizarre, unprecedented directions, whether he was impersonating an incompetent comedian known as Foreign Man or pretending to revive an elderly lady who feigned a heart attack on his stage.

In these final months before Election Day 2020, the news media must find a way to confront the fact that Donald Trump is a character playing a real-life role. Unfortunately, in that role he is the actual president of the United States, with all the vast destructive power that comes with it.

To continue to deny that Donald Trump is a performance artist playing a character, and in both roles is a man increasingly detached from reality, is to fail the American people and our democracy in fundamental ways.

Yes, Donald Trump is like a space alien who is living on Earth and pretending to be human, with no comprehension of how humans think or behave. Yes, Donald Trump appears to be mentally ill and likely a sociopath, a megalomaniac and in total a menace to all people on the planet. Yes, Donald Trump is a mad king and an American authoritarian. Yes, Donald Trump is all these horrible things and many others. But to truly understand Donald Trump, we must accept the foundational premise that he is a character. The man, the actual person born as Donald John Trump, ceased to exist long ago.

Regardless of the outcome of the 2020 election, Donald Trump is now a larger than life figure. In that capacity, he is much more than a mere mortal. Historian Peter Wood has said that "'Trumpism' cannot be interpreted as an instance of a personality or a psychology; it would have to be recognized as the thoughtlessness of the entire culture."

On Nov. 3, the American people have a choice to make. Will they decide to embrace Trump as being the worst, yet most perfect performance of who and what they collectively are? Or will they vote this brilliant but evil performance artist out of office and begin the hard work of purging the poison, far deadlier than bleach, that he has injected throughout the American body politic?