Donald Trump is not a supervillain — he just wants to be

His goals are not mysterious: Donald Trump wants to rule over a corrupt regime forever. What will we do about it? 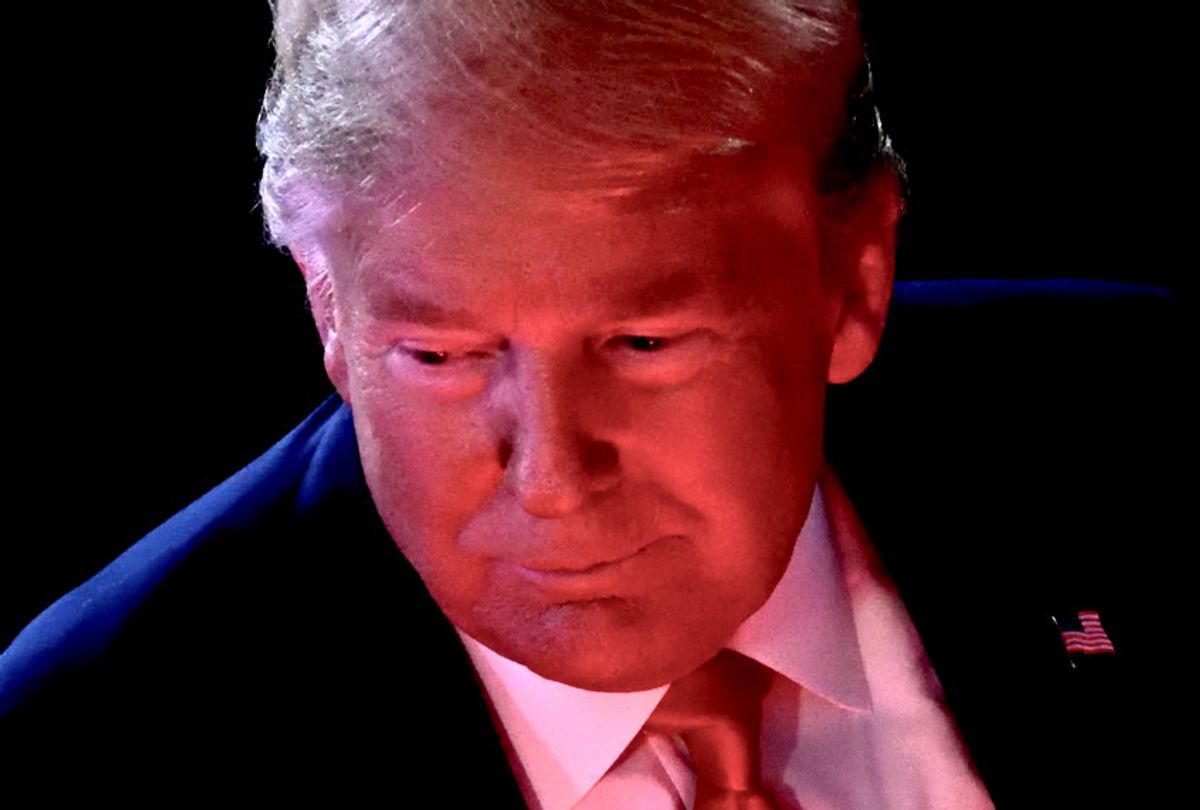 Donald Trump is not a supervillain from a comic book. He is a simple man, almost primal in his drives and impulses. For those who choose to see the world as it actually exists, there is no great mystery about what Trump wants: His goal is to be president forever and to use the power of the office to enrich himself and his inner circle, while taking revenge on anyone and everyone who dare to oppose him, or who he thinks has wronged him.

After nearly four years of Trump's public contempt for the rule of law, democracy, the Constitution and norms of human decency, there are still too many Americans — especially among the news media and pundit class — in a state of denial about the reality of this dire situation.

They have forgotten the wisdom of Occam's razor: the simplest explanation is more likely than not the correct one. This is orders of magnitude true in the case of Donald Trump, very simple man and de facto American emperor.

Seeing opportunity in the coronavirus pandemic, Donald Trump has repeatedly shown the American people and the world who he really is.

The most recent example: During a "coronavirus briefing" on Wednesday, Trump threatened to adjourn both houses of Congress — a brazen attack on the Constitution and the rule of law — unless that body surrendered to his will by immediately appointing his handpicked nominees to key government positions.

In 2017, Yale historian Timothy Snyder, author of the New York Times bestseller "On Tyranny," warned the public about Trump's obvious plan to use a crisis to suspend democracy and the Constitution. Here's what he told me then:

Let me make just two points. The first is that I think it's pretty much inevitable that they will try. The reason I think that is that the conventional ways of being popular are not working out for them. The conventional way to be popular or to be legitimate in this country is to have some policies, to grow your popularity ratings and to win some elections. I don't think 2018 is looking very good for the Republicans along those conventional lines — not just because the president is historically unpopular. It's also because neither the White House nor Congress have any policies which the majority of the public like.

This means they could be seduced by the notion of getting into a new rhythm of politics, one that does not depend upon popular policies and electoral cycles.

Whether it works or not depends upon whether when something terrible happens to this country, we are aware that the main significance of it is whether or not we are going to be more or less free citizens in the future.

My gut feeling is that Trump and his administration will try and that it won't work. Not so much because we are so great but because we have a little bit of time to prepare. I also think that there are enough people and enough agencies of the government who have also thought about this and would not necessarily go along.

On Tuesday, Donald Trump declared that he had "total authority" over the country's governors and the individual states they were elected to lead. In making that declaration Trump also threatened to force the country's governors to cease social distancing and other rules put in place to slow down the spread of the coronavirus pandemic. His argument, of course, is that those restrictions are damaging "the economy" and therefore Trump's chances of being re-elected in 2020 (assuming a presidential election even takes place).

Of course, Trump does not have any such power under America's federal system of government. Such a fact is of little importance: Like other authoritarians, he is testing and breaking political norms so that he can shatter them later.

Such rule-breaking behavior has been an ongoing theme of Trump's rule.

Trump has repeatedly "joked" that he will not leave office, publicly solicited the interference of hostile foreign powers to help him steal the 2020 election, and has threatened the Democratic Party, the news media and others who dare to oppose him with imprisonment (or worse) for "treason."

Donald Trump is also trying to defund the U.S. Postal Service, perhaps to prevent mail-in voting. Such an outcome will force the American people — and Democratic voters most of all — to wait in line where they may well be exposed to the coronavirus. Refusing to permit mail-in voting during the coronavirus pandemic will clearly suppress voter turnout, an outcome that will help Trump remain in office. Shutting down the Postal Service will all but guarantee, arguably, that Trump will win a second term.

Trump has also refused to send lifesaving ventilators and other much-needed medical equipment to states or localities run by Democrats. Instead, he's distributing urgently needed equipment like a dictator or mafia boss, as rewards to his court and other sycophants. In essence, Trump is intentionally hurting and killing those Americans who he deems to be "disloyal" to him and his regime.

In a recent essay for The Atlantic, Kristy Parker and Yascha Mounk warned that Trump's blatant use of the authoritarian's playbook during the coronavirus crisis will create an opportunity to further undermine American democracy:

Recent history shows that authoritarian populists engage in six categories of assaults on democracy, of which seizing raw executive power is but one. As president, Trump has engaged in each of these behaviors: spreading disinformation, quashing dissent, politicizing independent institutions, amassing executive power, delegitimizing communities, and corrupting elections....

Now, these same tendencies are shaping President Trump's response to the current pandemic…. Perhaps the only authoritarian play Trump hasn't yet made is corrupting the upcoming election with the pandemic as an excuse. But we are in the early days of this crisis, and the prospects for him to do so — or to abuse his powers in other ways — are manifold.

Why do so many members of the news media, the chattering class and the public en masse continue to treat Donald Trump and his threats to democracy and the rule of law as "jokes" performed by an incompetent buffoon who deserves mockery? (Which is truly a waste of energy, since Trump has proven himself to be a malignant narcissist with no sense of shame.)

Moreover, why do so many of these same people still believe that Trump's defeat is somehow inevitable, or that there will definitely be a presidential election in November?

In a previous essay for Salon, I described these people as the "hope peddlers":

[T]he people who tell the public that everything will be OK, that the danger of the Trump regime has been somehow exaggerated,  that matters are not as dire or extreme as they appear and that a return to "normalcy" is "inevitable" if we somehow muddle through the present moment.

The hope peddlers are so personally, emotionally and financially invested in "the system" that they are existentially incapable of admitting that Donald Trump and his regime are authoritarians and white neo-fascists who represent an existential threat to the United States of America.

The hope peddlers are also engaged in fantastical thinking where they truly believe that if they repeatedly disseminate narratives about nonexistent Democratic Party victories against Donald Trump's regime, such victories will somehow magically appear through sheer force of will.

Some of the other people who cannot admit to themselves (and the public) what and who Donald Trump really is are still stuck in the bargaining and denial stages of grief. Approaching the end of Trump's fourth year in office, such people are lost and may never come to terms with America's horrible reality as failed democracy fully run by neoliberal gangster capitalists, white neo-fascists and Christian nationalists.

Other Americans who are still stuck in the stages of grief about the age of Trump are behaving like children hiding under the bed from monsters. Children do not yet know that human monsters are real, and that hiding from them will bring no salvation. Adults have no excuse for engaging in such fallacious thinking.

Then there are others who do not understand the difference between hope and optimism. Activist and science fiction writer Cory Doctorow explained this in a 2016 essay:

Hope is why you tread water if your ship sinks in the open sea: Not because you have any real chance of being picked up, but because everyone who was picked up kicked until the rescue came.

Kicking is a necessary (but insufficient) precondition for survival. There's a special kind of hope: the desperate hope we have for people who are depending upon us. If your ship sinks in open water and your child can't kick for herself, you'll wrap her arms around your neck and kick twice as hard for both of you.

Hope involves taking agency and control over one's own destiny and then taking action to achieve that goal. Optimism is passive. Optimism is also assuming that someone else will do the hard work and that you can be a type of free rider for other people's labor and struggle and sacrifices.

Donald Trump may not be a supervillain. But defeating him does require that the Fourth Estate and good Americans embrace alternative ways of thinking.

These new guidelines are:

Do not assume that Donald Trump is telling the truth. He has repeatedly shown himself at least 16,000 times to be a habitual liar.

Do not assume that Donald Trump is a decent human being, acting in the best interests of the country. He has repeatedly shown himself to be a corrupt, self-interested person who has no love for the United States and its people.

Do not assume that Donald Trump is an emotionally, intellectually or mentally healthy and normal human being. He has repeatedly shown that he is an obvious malignant narcissist, likely sociopath and apparent cult leader.

Stop assuming that Donald Trump is anything other than what he has shown himself to be. There is no alternate explanation for Trump's evil behavior. Trump is not kidding; Trump means what he says.

The American people in general, and especially the members of the media class, should have learned these rules four years ago, and internalized them. With Election Day 2020 only a few months away, it is almost too late.