Trump pushes back against Fox News for cutting his "most loyal supporters": "I love Diamond & Silk" 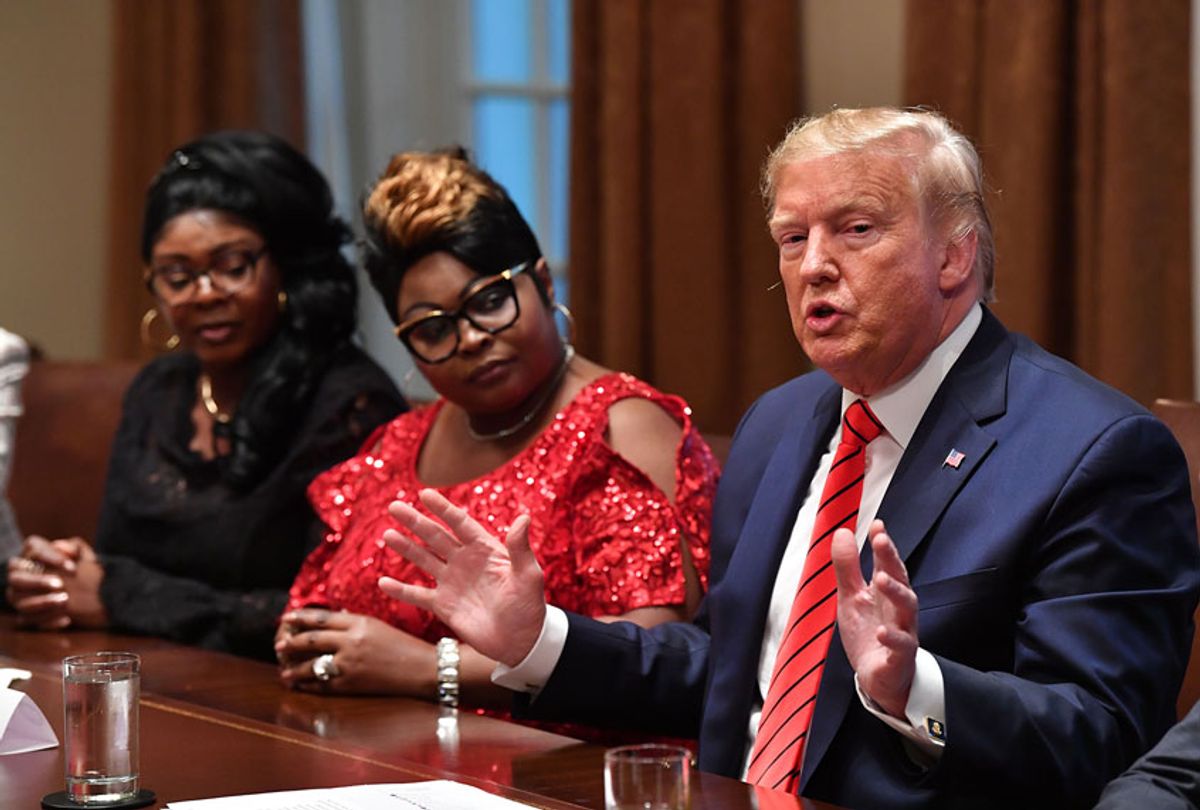 President Donald Trump publicly backed Diamond & Silk after reports broke that Fox News had cut ties with his self-described "most loyal supporters" after the duo repeatedly spread misinformation about the coronavirus pandemic.

"But I love Diamond & Silk, and so do millions of people!" the president tweeted Tuesday.

Trump had responded to a tweet in which Diamond & Silk called out their "haters," in true Trump fashion. Trump infamously extended "best wishers" to his "haters" to mark the solemn anniversary of 9/11.

"Haters keep saying they hate Diamond and Silk," the duo wrote, "but you can't hate what you ain't never loved!"

Diamond & Silk embraced the endorsement from the highest political office in the country, tweeting back to the president: "We Love You More!" The duo are among Trump's favorite proxies du jour: He has retweeted the duo, invited them to the White House and featured them at events, recently introducing them as "two great people" at an early March rally in Charlotte.

But as the coronavirus outbreak has intensified, Diamond & Silk — whose real names are Lynette Hardaway and Rochelle Richardson — drew widespread criticism for repeatedly spreading baseless conspiracy theories. A staple on "Fox & Friends" with their own Fox Nation streaming show — the network's three-hour morning show is a the president's favorite — they reportedly lost their gig after Twitter locked their account over tweets which falsely claimed that social distancing regulations caused illness.

"The only way we can become immune to the environment; we must be out in the environment. Quarantining people inside of their houses for extended periods will make people sick!" the duo wrote on April 8.

Fox did not comment at the time, but Diamond & Silk quietly disappeared from on-screen appearances. The Daily Beast reported Monday that the pair had been fired.

"After what they've said and tweeted you won't be seeing them on Fox Nation or Fox News anytime soon," one source familiar with the move told The Daily Beast.

Fox News also recently severed ties with Fox Business host Trish Regan after she called the pandemic an "impeachment scam" — an echo of the president's February remarks decrying it as a "hoax" — but has not yet taken any known action against its highest-rated stars, such as Sean Hannity and Tucker Carlson, despite the fact they continue to downplay the coronavirus pandemic in America. Fox News did not immediately respond to Salon's request for comment on this matter.

In contrast to Diamond & Silk, Fox News has fallen out of favor with the president, who has repeatedly slammed the network's coverage of his response to the pandemic despite morning and primetime blocks jammed with opinion shows that broadcast a nearly unbroken stream of laudatory commentary.

".@FoxNews just doesn't get what's happening! They are being fed Democrat talking points, and they play them without hesitation or research," Trump tweeted Sunday.

Diamond & Silk appear unfazed — and perhaps even emboldened. The duo on Tuesday threatened legal action over allegations of libel against Bianca DeLaRoso after the Wonkette writer called the duo the "the black faces of white nationalism." They also posted a photo of themselves praying over Trump in the Oval Office with a number of black religious figures.

In the wake of their reported boot from Fox, Diamond & Silk have interviewed Surgeon General Jerome Adams and Dr. Shiva Ayyadurai, who claims to have invented email. Ayyadurai's Wikipedia page identifies him as "an Indian-American scientist, engineer, entrepreneur and promoter of conspiracy theories and unfounded medical claims."

In the self-produced video, Ayyadurai criticizes health officials and the media for alleged "fearmongering . . . based on a fake science and a fake news model" whose aim is "top-down, soviet-style medicine" in which "someone on the top is going to tell you, me and all of us what goes into our bloodstream."

This prompted Silk to wonder, "When I hear you talk about the virus and the different virus that's inside of us already, how do we contract another virus?"

An edit cuts her off mid-sentence.