Is Trump taking hydroxychloroquine? Who cares? It's another right-wing snake-oil scam 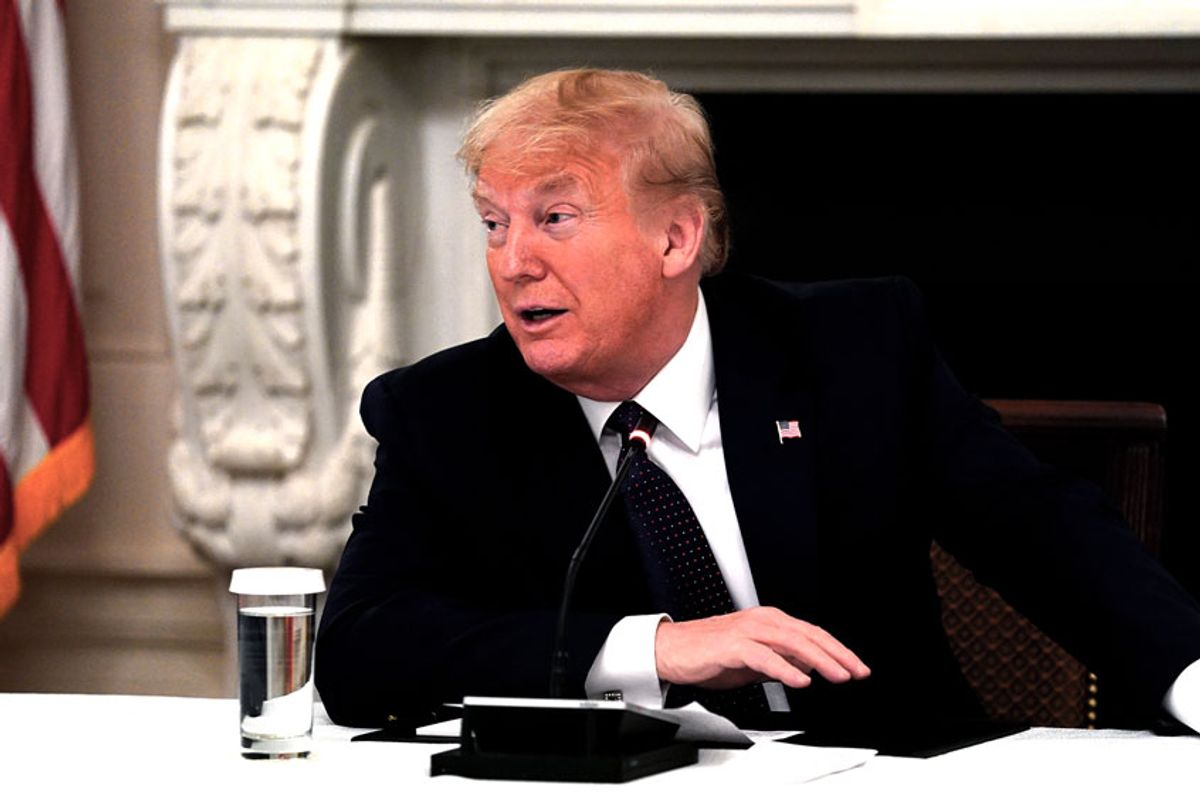 With the rising scandal over Donald Trump's mass firing of inspectors general who are threatening to uncover widespread corruption in his administration, the president is clearly desperate for some delicious culture-war bait that will distract cable news pundits and lure his supporters and his critics into pointless arguments. So he coughed up one such juicy nugget on Monday afternoon, bragging to reporters that he had started taking hydroxychloroquine — the anti-malarial drug with no proven benefits for COVID-19 — 10 days ago.

Hydroxychloroquine, like fights over mask-wearing and social distancing, has become a flashpoint in Trump's efforts to turn the crisis over the novel coronavirus into a culture war. Conservative media figures like Laura Ingraham keep dangling this drug as an alternative to science-based methods to curtail the spread of the coronavirus. Liberals tend to get aggravated, for understandable reasons, at conservatives hyping a drug that can be dangerous and that early studies have suggested probably doesn't work against COVID-19. Conservatives, always eager to "trigger the libs," have only become more enthused about hydroxychloroquine as a result.

Trump didn't try to hide that this was a blatant effort to troll the press and the Democrats, gleefully declaring, "I was just waiting to see your eyes light up when I said this" to reporters and trumpeting, "I'm still here."

It's more likely than not that Trump is lying about taking hydroxychloroquine. For one thing, he lies about everything. For another, he doesn't actually have to take this drug, which has a known risk of sudden death by cardiac arrest, for his publicity stunt to work.

What matters, from the Trumpian point of view is plugging into the deep right-wing need to believe there's some "secret" or "miraculous" cure, ideally one that is hiding in plain sight but has been rejected by scientists and pointy-headed liberals with their fancy educations and namby-pamby insistence on "reality-based" solutions. For the American right, the very idea that a scientist thinks she knows more than they about science, just because she went to school and has done research, is an anathema. If anything, the more scientists reject hydroxychloroquine — which is only now being studied as a treatment for the coronavirus, and hasn't been studied at all as a prophylactic, which is how Trump claims to be using it — the more right-wingers will cling to it.

Believing they know more than the stupid scientists with their books and their facts and their degrees has long been central to the worldview of the more authoritarian members of American society. This is the main reason for one of the funnier peculiarities of right-wing subculture, its undying love for snake oil.

In a classic 2012 Baffler essay called "The Long Con," historian Rick Perlstein examined the conservative enthusiasm for all manner of cons, with a special emphasis on medical quackery. Subscribing to right-wing publications or newsletters means being drowned in advertisements that promising some "secret" knowledge that "elite" scientists are deliberately withholding from you, often magical cures for everything from cancer to heart disease.

Perlstein traced this conservative-on-conservative grift back over the decades, and it continues to this day. Figureheads like former Arkansas governor Mike Huckabee or current HUD Secretary Ben Carson have been routinely associated with scams promising "secret" cures for cancer encoded in the Bible or supplements that will cure conditions like Down syndrome, cystic fibrosis and, always, cancer. The pitch always revolves around the idea that this secret cure is deliberately being kept from the public, but available to you, right-wing nut at home on your sofa, for a low, low price that always ends up being quite expensive.

These pitches work because of conservatives' contempt for expertise cannot be untangled from their authoritarianism. What is considered right and true should, in the mind of the authoritarian, flow from what authority figures — usually rich white conservative men — wish to believe is right and true. Science, with its insistence on valuing objective reality over the whims of evangelical ministers, self-important demagogues and other right-wing windbags, is treated with special hostility, as it presents the greatest threat to the ability of right-wing leaders to simply declare what is true by fiat.

Trump himself is a comically exaggerated version of this right-wing tendency to believe that "expertise" is a matter more of who you are than what you know. Trump is barely literate, but the idea that anyone might know more than him because they do things like read or study is preposterous to him. He has repeatedly declared himself more knowledgeable than experts on every topic under the sun — economics, military history and tactics, the law and the courts, science and, of course, medicine. He hasn't studied any of these topics, of course, but he often suggests that knowledge can be obtained genetically, referring to his "great super genius" uncle, Dr. John Trump, a nuclear engineer and MIT professor, who gained his expertise not from his DNA but from years of study.

But this isn't just about Donald Trump. This contempt for science informs, for instance, the decades-long climate-denial movement, which feeds off the unwillingness of the average conservative to admit that scientists might better understand the threat that fossil fuel consumption presents to the environment than the average Joe SUV driver.

These anti-science pitches work even better when combined with an appeal to the innate selfishness of right-wing ideology, often spun as "individualism." It's very appealing to conservatives to believe they have an "elite" form of health care, unavailable to the hoi polloi. Add to that the fascistic impulse to see disease as a way to "cull" the herd of its supposedly weaker members, and you have the perfect breeding grounds for the right-wing fantasy we're seeing playing out in front of us: Miracle cures for those who are worthy and virtuous, death and disease for everyone else.

The fantasy that conservatives are an "elite" who will be spared during the apocalypse crops up in the right-wing imagination in all sorts of ways, most notably in the enthusiasm for the evangelical doctrine of the Rapture, which holds that those who adhere to their faith will be swept up to Heaven in an instant while the rest of us suffer through Armageddon. The assumption that right-wingers get some special dispensation from the coronavirus is all over the increasingly hostile response to public health measures like mask-wearing and social distancing. "Public health" is an essentially repulsive concept in right-wing ideology, which takes as a matter of faith that the elect will always find a way to save themselves while lesser people must struggle and die.

This mentality was on full display in a video from News 12 Long Island reporter Kevin Vesey that went viral last week. Vesey showed up to cover a protest against stay-at-home orders and once the crowd realized he was part of the "fake news" media, they turned on him, yelling insults and otherwise harassing him. One man kept following Vesey closely, despite Vesey asking him to keep his distance.

"Nah, I got hydroxychloroquine," the man said. "I'm fine."

That's the right-wing mentality in a nutshell, in the contempt for both expertise and any shared concept of the common good. There's no scientific reason to believe that hydroxychloroquine means you will be "fine" — so far, it does not appear to be successful at treating COVID-19, much less preventing it — but the fantasy that he has a "secret" cure that the rest of us don't get has too much power for this man to let it go. Of course, as his words make quite clear, he doesn't care if the rest of us get sick or die, so long as he is "fine".

Trump's "evidence" that hydroxychloroquine works is, of course, that he hasn't gotten the virus yet. Assuming that's true, the likelier explanation is the more scientific one: The White House has instituted a rigorous testing and tracing system, which the Trump administration has deliberately made unavailable to the rest of us. Reports that multiple members of the administration have tested positive for the coronavirus are a direct result of this testing regimen. This isn't evidence that Trump "should" have gotten the coronavirus by now. It's actually evidence that he's been kept safe, because rigorous testing means that people who are positive are identified and quarantined before they have a chance to infect him.

That's the most galling thing about this entire hydroxychloroquine gambit. In fact, Trump does have access to an "elite" form of health care that isn't available to the public at large: Testing and tracing. He's all too happy to use this scientific strategy while hyping snake oil to the public, rather than pursue sensible scientific measures on a large scale to protect the entire population.

Trump knows there's power in the belief that he has access to special, secret medicine that others don't. He's happy to offer up a dumbed-down version of that truth with ludicrous claims that hydroxychloroquine is protecting him, while keeping the actual methods that keep him safe to himself.