Trump's war on masks: It's working — at least with his base

Trump supporters are eagerly trashing masks and social-distancing rules. Will we all pay the price for this folly? 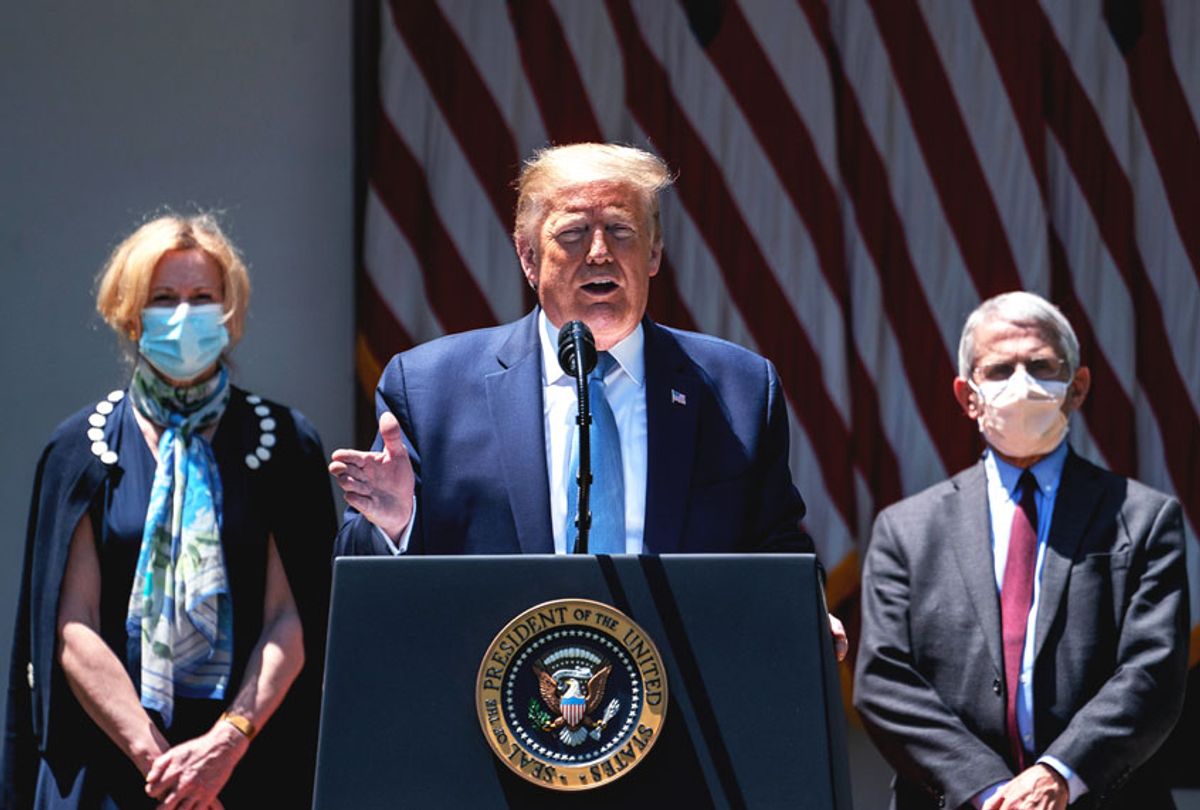 On Saturday night, Eric Trump appeared on Fox News and, ignoring the nearly 1.5 million people who've been infected and the nearly 90,000 dead — more than that, by the time you read this — made a startling declaration: "After Nov. 3, coronavirus will magically, all of a sudden, go away and disappear and everybody will be able to reopen." He added, "They're trying to deprive [Donald Trump] of his greatest asset ... the fact that he can go out there and draw massive crowds."

"They," of course, would have to be a worldwide conspiracy involving nearly every government in the world and the billions of people who have been put under some kind of stay-at-home order to slow the spread of the novel coronavirus. This conspiracy theory isn't just asinine, it's also pure projection. It's Eric's dad, after all, who has a long-standing habit of hyping nonexistent threats in order to manipulate elections, from "Clinton's emails" to "Obama's birth certificate" to the 2018 caravan of Central American migrants who were supposedly coming to kill us all, but who suddenly evaporated after the midterm elections. Trump has even played this game before with a virus, spending the summer and fall before the 2014 midterms hyping the threat of Ebola virus in an effort to hurt Democrats, even though the number of people who contracted that disease in the U.S. and then died was — are you ready? — zero.

But it's no surprise to hear the president's second son going all-in on rhetoric meant to minimize the threat of the coronavirus. While the White House officially recognizes that the coronavirus is real — for a time, Trump even tried to play "wartime president," before he found out that controlling a pandemic was real work and gave up — the president's true feelings are clear: He wants everyone to pretend this pandemic isn't happening, because he thinks that's his best bet for re-election. So he showily refuses to wear a mask in public, inflames protests against stay-at-home orders and whines in public that coronavirus testing makes him "look bad" by recording the spread of the virus.

For a short while, there were reasons to hope, that the threat of being illness or death might outweigh the devotion to Trump among his base of supporters. Polls showed that despite Trump flirting openly with virus trutherism, Republican voters were taking the virus seriously and taking measures to stay safe. But after weeks of daily pressure from Trump, Fox News and other media outlets, Trump voters are getting the message: To show their loyalty, they must act like this pandemic is no threat at all.

At the center of this fight is the refusal to wear masks. Most Americans now wear face masks in public, out of a reasonable, science-based concern that asymptomatic people are spreading the virus. But Trump loyalists are increasingly making a big deal out of how anti-mask they are, both to show contempt for those who believe the virus is serious and to demonstrate their personal fealty to Trump, who himself never wears a mask.

"You're discriminating against me," whined a woman in a video that went viral over the weekend. Said woman, who seems to have taken the video herself, is haranguing employees at a grocery store who won't let her in without a mask. She  threatens to sue the store, demands to speak to the manager and, for good measure, films an employee who is disinfecting shopping carts, in a clear attempt to intimidate him.

The woman claims she has "a medical condition" and is "not allowed to wear a mask," which is almost certainly false. She appears to have been taken in by a rumor that spread — dare I say it went viral? — across Trump circles online claiming that there's a "loophole" in federal law that allows one to avoid wearing a mask by pretending to have a disability, and that threats about a HIPAA violation will intimidate service industry employees into letting people into stores without masks.

Some crafty Trump lovers have even started to circulate official-looking fake documents that read, "I am exempt from the Governor's regulation mandating face mask usage in public," instructing each other to print out these counterfeits and use them to bully hapless workers at supermarkets or big-box stores.

The incident comes on the heels of the video made by Genevieve Peters, a self-identified Trump voter who made a big display out of refusing to wear a mask in Trader Joe's. She made similar phony claims that it was "unhealthy" for her to wear a mask, saying, "I'm not endangering you because I'm a healthy person."

A few days later, Peters told her Facebook followers she was experiencing symptoms such as sore throat and swollen lymph nodes. Unsurprisingly, she has refused to be tested for the coronavirus. Like Trump, she appears to believe the disease isn't real if you don't test for it.

Last week, Trump supporters rallied outside in Long Island, with many or most not wearing masks. When mask-wearing local reporter Kevin Vesey showed up to cover the rally, he was viciously harassed by the mob, many of whom claimed they had no reason to be afraid of contracting coronavirus.

Trump threw more fuel on the fire Monday by tweeting the video of the harassment approvingly, declaring that all he saw was "love of Country" and hatred of "Fake News".

But the coronavirus is not "fake news." Suffolk County, New York, where the video was taped, is a short drive east of New York City and has seen more than 1,700 deaths from COVID-19.

Masks are far from perfect — it's far better to avoid crowded indoor spaces like stores and public buildings, if you can — but evidence shows that even simple cloth masks can help prevent the spread of the virus by people who may not know they're infected.

On Monday, the Washington Post published an article that shows how swiftly the resistance to mask-wearing and other social distancing has become a matter of tribal loyalty among Trumpists — and how working-class service industry workers are being put in real danger because of it. Reporter, Stephanie McCrummen went to Georgia, where Republican Gov. Brian Kemp has dramatically rolled back restrictions on public gatherings, and found a frightening situation where mask-free customers are crowding stores and restaurants, while mask-clad workers serve them.

Customers declared this was a matter of "personal choice" and that "the news is blowing it all out of proportion," or even that public health officials concerned about the virus are "a bunch of liars." McCrummen barely mentions Trump in the piece, but the implications are quite clear: These well-heeled white people who are bunching up in stores without masks, breathing all over low-income workers who have no choice but to be there, are almost all Trump supporters. That's leading them to be careless about the virus, if not in outright denial about it.

"Masks are NOT allowed in the buildings for safety sake. They are viewed as a robbery in progress and will be handled that way," announced Annie's Campground, near the village of Gresham in rural central Wisconsin. The implication is quite clear: If you wear a mask, in defiance of Dear Leader, Annie's calling the cops on you.

It's no wonder all this is happening. Right-wing media continues to pump out propaganda minimizing the virus and demonizing any and all measures to slow the spread. Just in the past week, Laura Ingraham of Fox News called the coronavirus reaction "panic porn" and said "Democrats don't trust" her audience. (Which is understandable, since her audience is wandering around without masks breathing in other people's faces.) Fox News has also been trying to convince viewers that the death toll for COVID-19 is lower than the official numbers, even though the actual number is almost certainly higher. And Rush Limbaugh went on a lengthy rant on Friday claiming that public health officials like Dr. Anthony Fauci are wearing masks not out of a duty to protect other people, but "as a symbol of fear." Fox News is now doing segments celebrating businesses that reopen with minimal efforts to protect customers and workers, or none at all.

Polling numbers also show this propaganda is working. A Morning Consult poll suggests that, within just a few weeks, Republican voters have dramatically shifted from worry about the virus to skepticism that it's a serious problem. While Democrats largely continue to stay at home, the number of Republican voters who have decided to start socializing again has doubled in just a few weeks. There's also a sharp partisan divide on what the future holds, with strong majorities of Democrats fearing the worst is still to come, while most Republicans believe the worst is already behind us.

Who is right on that question, in fairness, is hard to say right now. This virus is new and there's still a lot we don't know — for example, whether hot summer weather will slow the spread, or how much. While the news cycle is ever shortening, the virus still plays out on its own timeline. We won't know for at least a couple of weeks if there's going to be another outbreak because Trump Nation decided it was cool to hold barbecues and go to brunch without masks. Maybe all these Trumpers are right and the coronavirus will "magically" disappear, just like Trump's No. 2 son says. Or maybe the Trump loyalist communities are about to get a brutal comeuppance for giving the middle finger to mask-wearing and social-distancing rules. We'll all have to use our quarantine-honed patience while we wait to find out.