Donald Trump is bored: He wants to move on from this pandemic — just as it hits swing states 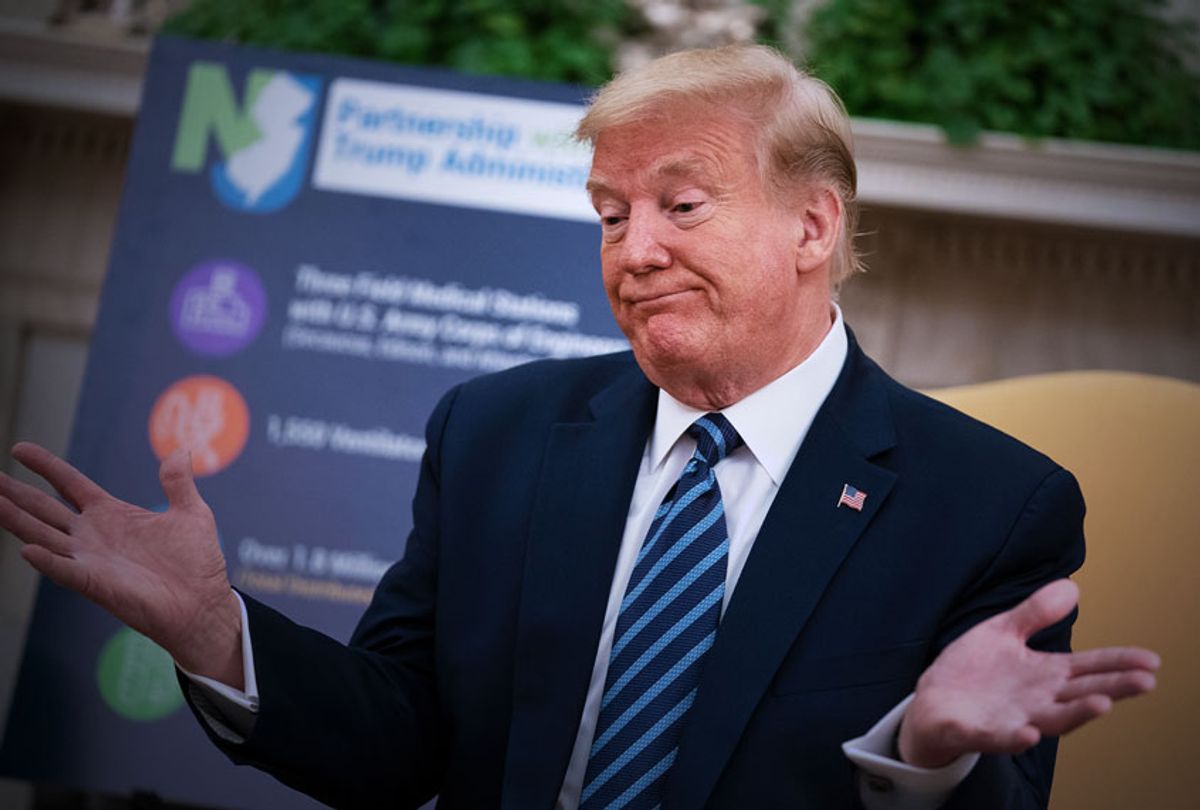 President Donald Trump reacts to a reporter's question as he speaks about protecting seniors, and the coronavirus, in the East Room of the White House, Thursday, April 30, 2020, in Washington. (AP Photo/Alex Brandon)
--

In March, after months of ignoring the looming threat of the novel coronavirus, Donald Trump decided to recast himself in a new role, declaring he was now a "wartime president," clearly imagining himself in the mold of FDR or, more likely, as Bill Pullman's presidential character in the 1996 film "Independence Day."

This was a total joke from the beginning, as Trump's behavior wasn't hard to predict. As a sociopath and narcissist, Trump would enjoy a stint play-acting as president while doing nothing. But when it began to dawn on him that waging war is like, hard work, he would just drift away, letting the "war" effort fail.

Unsurprisingly, that is what exactly happened. As Heather Digby Parton explains in her Wednesday column for Salon, what has "become clear in the last few days is that the Trump administration has made a decision" to give up any semblance of trying to flatten the curve, stop the spread or do anything meaningful to defeat the coronavirus.

Instead, Parton writes, Trump and his advisers "have apparently decided to let the virus 'wash over the country' as Trump wanted to do from the beginning."

The ostensible reason for pressuring states to "reopen" and for maybe-kinda-sorta winding down the federal coronavirus task force — which, despite the presence of incompetent Trump flunkies, still had some value thanks to actual medical experts like Dr. Anthony Fauci and Dr. Deborah Birx — is that the coronavirus is behind us and the focus needs to be on restarting the economy. (At least for now, Trump has apparently backed away from his threat to ditch the task force permanently.)

Trump made that clear in his press conference Tuesday, telling reporters, "We can't keep our country closed for the next five years" (which exactly no one was proposing).

When asked about all the people who will die as part of this "reopening," Trump implied that Americans will be happy to die for his cause, because they're "warriors."

Trump has clearly talked himself into the belief that the economy will come roaring back to life as soon as lockdown restrictions are lifted, which is utterly ludicrous. Between the certain further spread of the virus itself and the existing damage to the economy, things aren't getting better anytime soon.

The timing of this decision is distinctly odd, because while the curve of new cases is finally going down in blue states that took aggressive measures, like New York and California, the virus is starting to explode across the rest of country — which is to say areas that Trump needs to win if he wants to be re-elected (which is clearly the only thing he cares about). This graph from the New York Times gives a sobering glimpse of how the confidence and security felt by many denizens of TrumpLandia is about to go up in smoke.

As Greg Sargent laid out in the Washington Post on Monday, some of the swing states and districts that Trump needs to win in 2020 have seen the sharpest incline of cases. Trump's "reopening" strategy depends heavily on the assumption that the virus would remain concentrated in heavily Democratic cities and states he was never going to win anyway. So it seems like political suicide to abandon the fight right when the voters he most needs will see their regions hit hard.

It's tempting to imagine that Trump is motivated by some clever political strategy — or by any strategy at all — in making this move now. But it's probably just that he's getting bored with this whole coronavirus crisis and, now that things are getting really hard, he's ready to abandon it and move on. That's exactly what he did during his entire career in the real estate business — and in his marriages — abandoning one failed venture after another the second things turned rocky. Now he's doing it to the entire country.

The turning point was almost certainly April 23, the fateful day when Trump, in one of his endless propaganda dumps disguised as "press briefings," mused aloud about curing COVID-19 by injecting household disinfectants into the human body, framing this as a brilliant possibility that somehow had never occurred to medical science. Unless you've been in total seclusion as well as lockdown, you probably experienced the explosion of embarrassing coverage, complete with late night jokes about bleach-drinking and press releases from companies like Lysol advising Americans not to inject their products, because they will kill you.

No matter how desperately Trump and his allies tried to spin it, there was no way to pretending that Trump hadn't made what may have been the stupidest public utterance of any American president in history — or anyone else, really. Which is saying something in a TV landscape full of real housewives, people who agree to marry someone they've never met in person and the first host of "The Apprentice." (Oh, wait.)

Humiliated, Trump announced he was curtailing the daily briefings, whining on Twitter that they weren't "worth the time & effort" even though — as he so frequently likes to say — he got "record ratings."

Many folks, including me, predicted that this tantrum wouldn't last, because Trump is a terminal narcissist who lives for attention. Indeed, as the New York Times reported on the same day as Lysolgate, the daily briefings — which featured Trump talking for hours, spending most of his time in combative exchanges with journalists, which he clearly felt he was "winning" — were pretty much the only thing Trump was actually doing. The rest of his time was largely spent watching TV to hear people talking about him, tweeting and ranting on the phone to whoever would listen about how he wants more flattering coverage.

Sure enough, Trump's media boycott was abandoned as swiftly as it was begun, and he's been giving near-daily press conferences, although he has largely abandoned the pretense and trappings of an official White House briefing. It's clear that his humiliation at being exposed as an epic dumbass is still bothering him. He whined, somewhat mysteriously, that female reporters who asking him questions about his coronavirus response aren't "Donna Reed, I can tell you that."

It's clear the only value Trump has ever seen in the coronavirus task force was about using it as a pretext to hijack the daily briefings for a spectacle of self-aggrandizement. In psychological terms, the briefings, formerly a source of gratifying narcissistic supply for Trump, are now associated in his mind with narcissistic injury. Trump doesn't value American lives, only his own ego. Now that the task force no longer serves his ego, he's lost interest.

Trump has apparently decided that he can now simply declare victory over the virus and will that into reality through sheer strength of personality. On Sunday, in his typical style that is as ridiculous as it is grandiose, he tweeted out this pseudo-biblical nonsense:

....And then came a Plague, a great and powerful Plague, and the World was never to be the same again! But America rose from this death and destruction, always remembering its many lost souls, and the lost souls all over the World, and became greater than ever before!

The notion that America "rose," in the past tense, from the "great and powerful Plague" is silly. With lockdown restrictions ending and cases continuing to rise, it's more like the plague is just getting started.

But Trump doesn't care. The illusion that he's a wartime leader shepherding a scared nation through this crisis was pretty well shattered when everyone started making fun of him for suggesting that pumping ultraviolet light or household cleaning products into the lungs just might be a miracle cure. He misses his rallies and longs to get back to what he really enjoys, which is bashing Democrats and racist trolling.

People are dying, hospitals in many parts of the country are about to face what New York City just went through, and unemployment is soaring. But Donald Trump is bored and unhappy. This coronavirus TV show isn't any fun for him anymore, and he wants to move on. So he's abandoning even the pretense that he ever cared about American lives.