The fluidity of "The Queen's Gambit" is its secret weapon 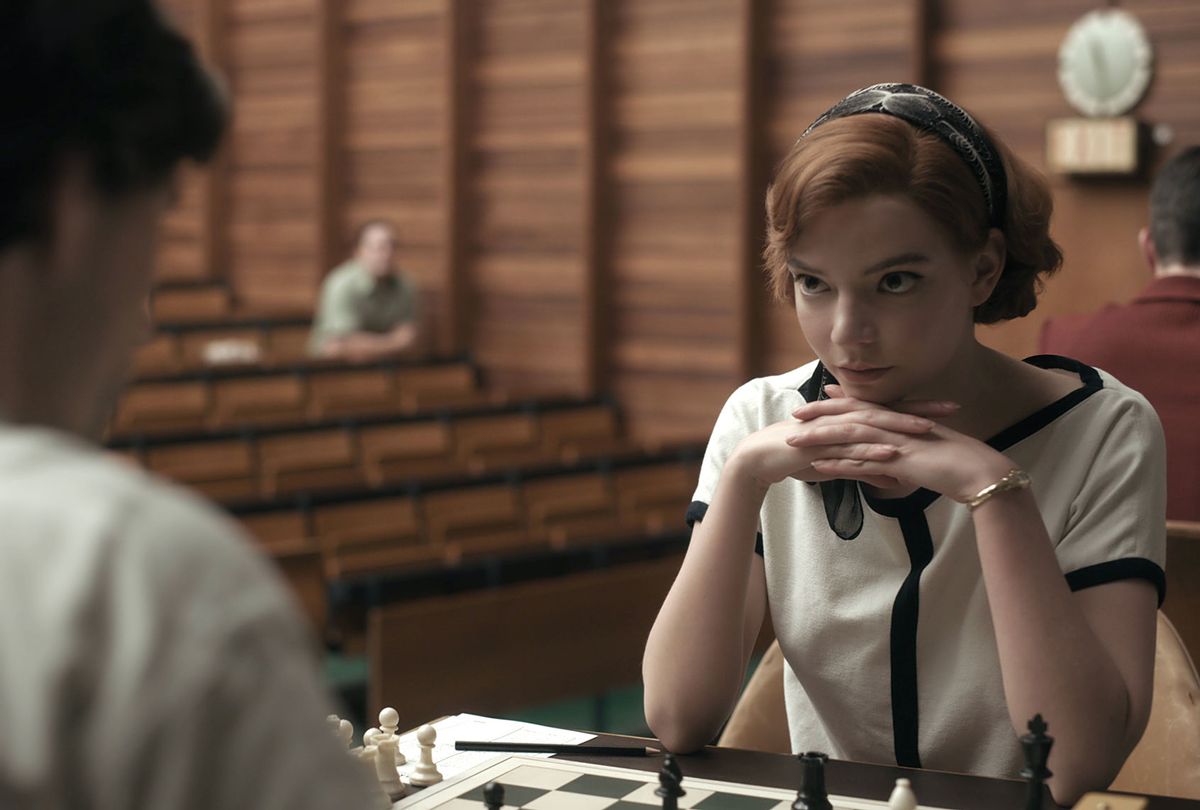 Anya Taylor-Joy as Beth Harmon in "The Queen's Gambit" (Netflix)
--

The following contains spoilers from "The Queen's Gambit," including the ending. If you haven't watched yet, check out Salon's review.

Who knew that chess flirting was a thing? One of the hallmarks of Netflix's surprisingly sexy limited series "The Queen's Gambit" are the chemistry-laden matches that chess prodigy Beth Harmon ("Emma" star Anya Taylor-Joy) plays against a series of men with whom she ends up in the bedroom – with varying results. One such interaction ties in with the rather elastic theme of identity on the show.

The charming player-turned-reporter Townes (Jacob Fortune-Lloyd) had completely captured a young Beth's heart in her first tournament, and years later when the two reunite in Vegas, he's effusive in his compliments and even invites her to his hotel room for an interview. It's clear Beth is hoping for some romantic overture, and it appears she'll get her wish as they gaze into each other's eyes, getting closer and closer . . . until Townes' chatty boyfriend bursts into the room.

Townes had led her on – or did he?

By the end of the series, they meet again, this time in Russia on the eve of Beth's final match, and Townes confesses, "I will admit I was a little confused. You really are something. But, um, what I really wanted was for us to be friends, and you kind of broke my heart."

Townes isn't the only one who discovers that attraction isn't straightforward. Taylor-Joy spoke to Salon about this telling speech.

"I think that's something that is very confusing for human beings. Some people are desperate to label things because the truth is so much more confusing and frightening," she says. "There's so much energy between people, and sometimes it's romantic and sometimes it's not, and that doesn't make it any less special. It just means that it's harder to categorize."

The series never explicitly identifies anyone's sexuality, and even Beth finds herself  drawn to the French model Cleo (Millie Brady), who introduces her to high fashion and later can be seen sleeping in Beth's bed. Is it platonic or something more? The series leaves that open to interpretation.

"In her relationship with Cleo, from the moment she sees her, she's fascinated by this creature that is so beautiful and so glamorous and all of these things that Beth wishes she could be," says Taylor-Joy. "Is she in love with her or is she not in love with her? She doesn't know, but she's just following her instincts. So yeah, I think the fluidity of the show is actually something that I really vibe with because to me, it's just being honest." 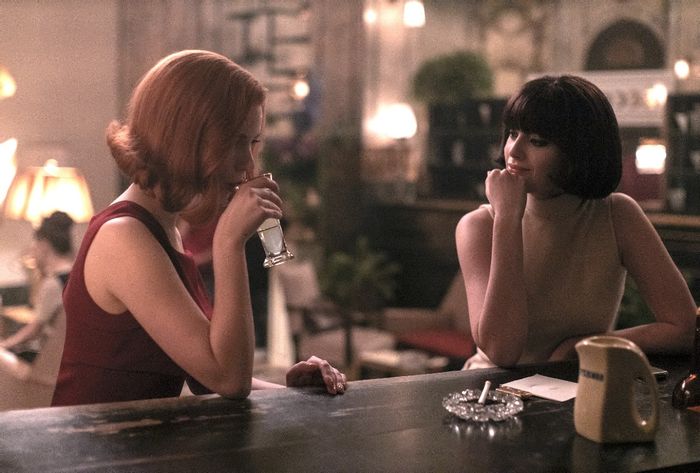 Sexual fluidity is just one aspect of the show's overall emphasis on ambiguity and existing in the liminal spaces. Beth's ongoing internal struggles could be interpreted as fighting expectations, sometimes even her own, that she be or act a certain way. Although she's a commanding chess competitor who vanquishes all comers, she also has self-destructive tendencies, whether it's through substance abuse or blowing up relationships. One of the questions the series poses is, "Where does genius end and madness begin?" But they very well could overlap.

"She's the broken person in a broken world, struggling to find her way," executive producer William Horberg says. "She's got this incredible ability that's almost like a superpower, but she also has these incredible fragility. And I think that's what makes it so interesting to watch her; you don't know whether she's gonna fall off the roof or fly."

Based on Walter Tevis' novel "The Queen's Gambit," creator Scott Frank's adaptation makes it clear to viewers from the start that Beth is not expected to fit into any expected niche. In fact, a cosmetic change in the way Beth looks makes her destined to stick out.

"In the book, Beth has brown hair," Taylor-Joys says. "However, when I read it, the first thing I said to Scott was that I felt she needed to have red hair. It turned out that Scott had thought the exact same thing. I loved the idea that no matter where Beth was, even if she was desperately trying to fit in, she would stick out like a sore thumb. I wanted the audience to be able to see her immediately."

The bright red hair signals a lifetime of standing out, from Beth's childhood as a 9-year-old orphan matching wits with adults to her being the only woman in male-dominated chess tournaments. Over and over again, we see Beth try and fail (spectacularly!) to fit in – at the orphanage, with the Apple Pis – but it's not meant to be. 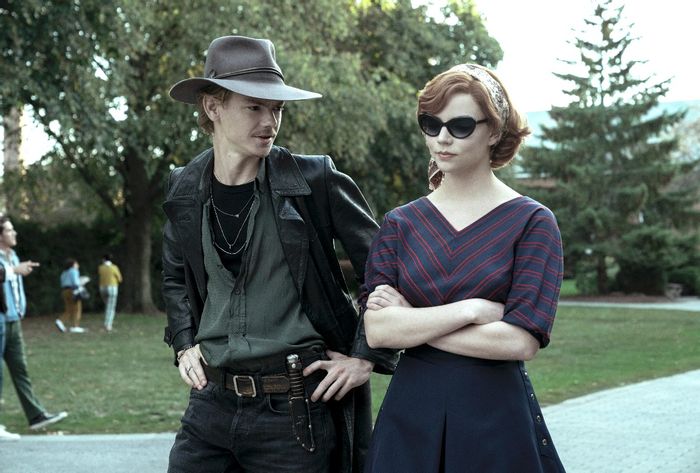 She's not the only one, however, who struggles with fitting the mold. The series is populated with incongruous characters, and she's benefited from all of them: the wise janitor (Bill Camp) who teaches her the intricacies of the game, Benny (Thomas Brodie-Sangster) the chess hotshot who carries a hunting knife, her pal Jolene (Moses Ingram) who steps beyond the narrow path for a Black woman in the '60s.

And then there are the two mother figures who are far from what one would consider maternal.

While her biological mother was a mathematical genius whose intellect no doubt got passed on to Beth, that's overshadowed by her actions: crashing their car on purpose, thereby killing herself and orphaning Beth at the outset of the series. Her adoptive mother Alma Wheatley (Marielle Heller) enables Beth's use of drugs and alcohol, while also sponging off of her chess winnings to support their household.

"What could be more traumatizing than to have a mother who tries to kill you?" says Horberg. "And then Alma's a whole other color . . . They really have a beautiful relationship that's kind of somewhere between sisterhood and parenthood. She's a little bit exploitive of her in a way that I find really delicious, but it's not so admirable. She's both introducing her to drinking but also, she's very instrumental in bringing her out of her shell and pushing her out of the nest."

But Mrs. Wheatley dies of a medical condition, exacerbated or assuaged by her own alcohol consumption, leaving Beth an orphan once again. 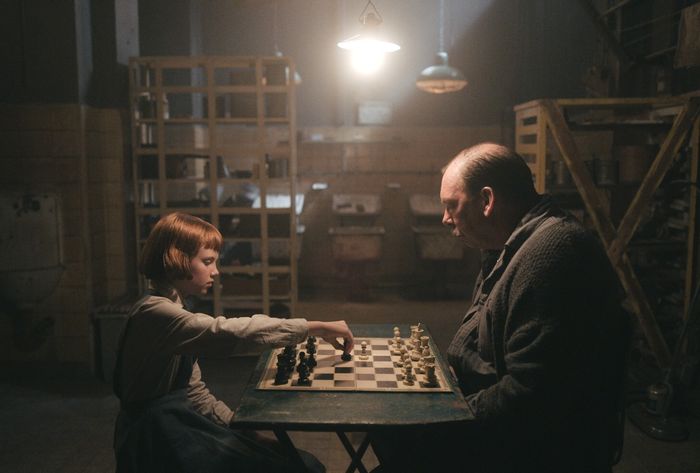 There's only so much trauma and emotional dissonance Beth can handle, and chess is her way of exerting control.

"From a very young age, anybody that was supposed to be a caretaker has abandoned her. And so she feels like she can't trust human beings to be reliable. And in chess, she knows the rules, learns how it works," says Taylor-Joy. "Even though there are nearly an infinite amount of sequences that can take place, she understands how to react to each of them that comes her way, while human beings have all of these different ways of reacting.

"And I think the second thing is that she's always felt like an outsider, she's felt inherently lonely. And in chess, she finds something that she's naturally very good at, and so she feels like she has a place and it becomes a big part of her identity."

But just as she thinks she understands what her role is, it changes. This can be seen in how she reacts when she's matched against a Russian prodigy younger than herself.

"It's the first time that Beth's ever played someone who is younger than her and it completely throws her entire sense of self. She's like, 'If I'm not the youngest chess prodigy, what am I? What space do I hold here?'" says the actress. "Scott really let me go to town. She is so threatened by this guy that she's gonna do anything she possibly can to psych him out."

In reality, we all live between the spaces and must negotiate changes; fighting against this is self-defeating. Beth must embrace the complexities of life off the board, and that begins the night before her final match in Russia. When Beth and Townes have their heart-to-heart, she finally accepts that his confusion may have contributed to her own. And then she comes clean about her dependence on drugs to play chess.

Naturally, as in many satisfying Hollywood products, epiphanies lead to victory. Beth's big win happens only when she relies on her own abilities – not advice from her gaggle of boys, and without the aid of pills.

In the series' final scene, she's outside with Russia's amateur street chess players who crowd her when they recognize the celebrity in their midst. In her all-white ensemble surrounded by people in dark clothes, Beth is still standing out. But her journey wasn't necessarily about finding a place or role to fit in the world, rather carving out a space for who she already is. She just had to make the right moves to get there. 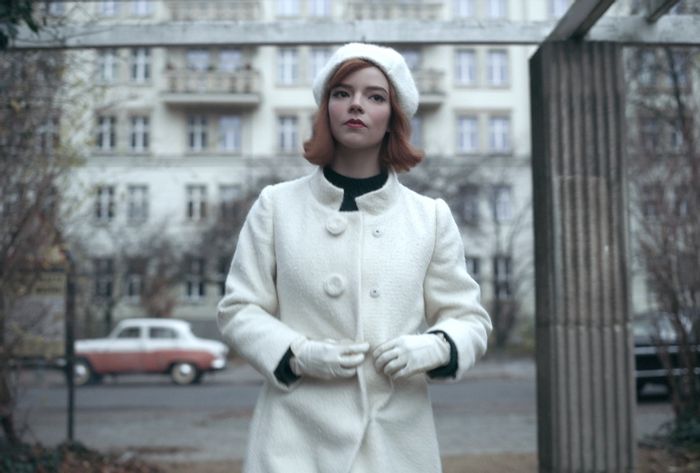 Tevis had planned on writing a sequel to his novel, but it never materialized before his death. Therefore it's accepted that "The Queen's Gambit" is a limited series, one-and-done. Netflix hasn't planned on a follow-up, and as a producer, Horberg thinks Beth's story is already "a full meal" – although he adds "never say never."

That said, one can't help wonder what comes next for Beth. She conquered Russia, but she's not yet World Champion. What happens to chess prodigies when they get older and achieve all of their goals? And what happens to one who is as troubled as Beth?

As with everything in "The Queen's Gambit," the ending is not without its ambiguities.

"It really is a question at the end of this whole thing as to what's the next day, like, next month, the next year for this character," said Horberg. "We've seen her go to dark places and come back from that. But we didn't want to say that she had somehow magically exorcised all of these demons. She's a very complicated person with a real tragic life history and a lot of issues that she's wrestling with – yes, genius and madness, but loneliness and intimacy and aggression and anger."

Taylor-Joy sees Beth's final breakthrough as finding some measure of happiness, if just for the moment.

"I was so happy that she had found contentment – that she just wasn't fighting or hurting herself in this moment in time, that she was like, 'You know what? Enough. I've done a good job. Shut the f*** up voices in my head,'" says the actress.

"I really hope that that feeling continues for her. So whether she stays in Russia, whether she goes home and lives with Jolene, and they have a college girl experience of living together, whether she and Benny end up both growing up enough to figure that out – whatever it is. I just want her to be content in herself. Because she's earned it. She did the work."

Horberg is less sanguine: "I think she takes a good stiff drink myself."