Why I'm sheltering my kids for as long as I can

Conservative parenting is all I've known, and all that has served me in my own life 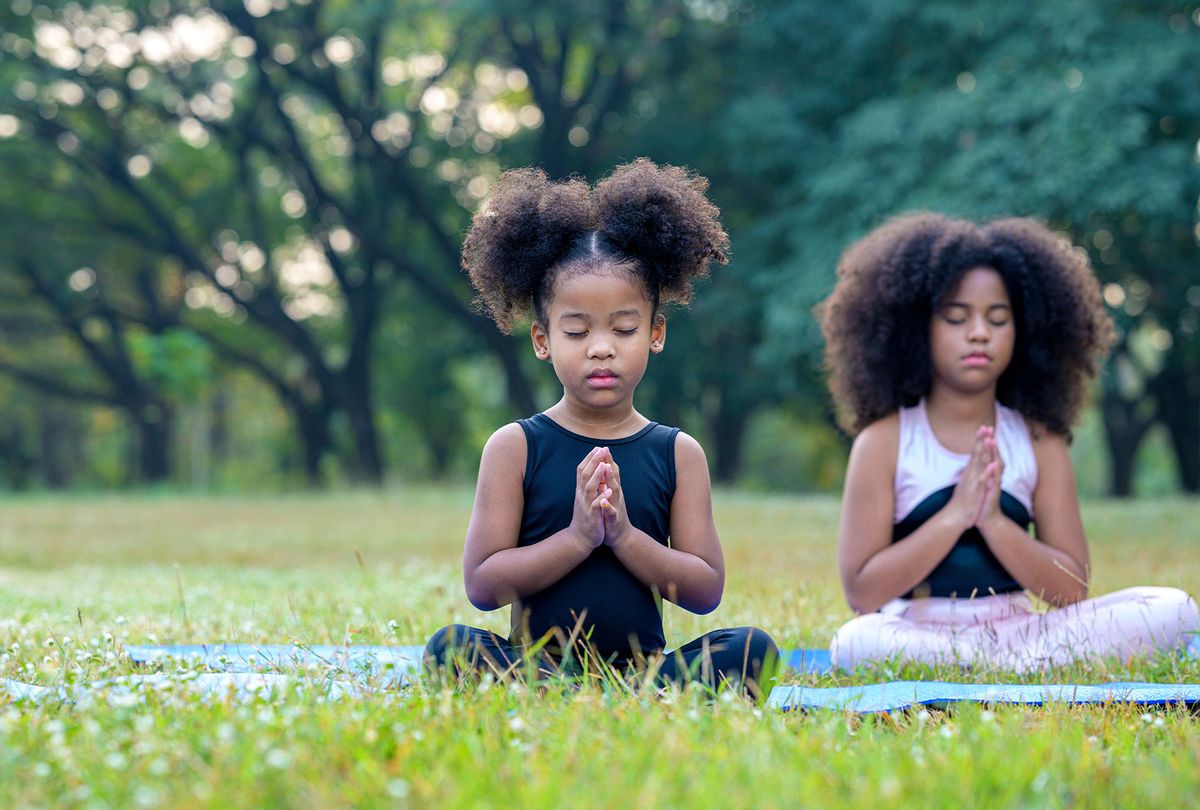 "There is no greater warrior than a mother protecting her child." — N.K. Jemisin

"Mommy, I want to come with you." My oldest daughter often beckons to me with a quivering lip and puppy dog eyes when I'm headed for the door. Any parent knows how unequivocally hard it is to tell an eight-year-old "no" — or any child, for that matter. Despite how hard it may be, I do it often to both of my little girls.

I myself am no stranger to that word, being born in the Bronx, the Boogie Down — Webster Avenue and Third Avenue, to be precise. My own coming-of-age story involved spending copious amounts of time with my Grandma Alice, may she rest in Uhuru, which means freedom in Swahili. (I have no connection to the Swahili language; it just sounds cool). My Grandma Alice was a darker-skinned, svelte, stern but loving Black woman of West Indian descent. Her tongue was sharp and her eyes were sharper. She could foil plans for my ill-gotten childhood mischief with just a glance. That ability was handed down to my mother. Suffice it to say, I got that shit too.

We were, at that time, a very conservative Afro-Caribbean family. Growing up in the '90s my family belonged to an Episcopalian church. You could find the soon-to-be and current matriarchs of the Creque side of my family in hard wooden pews every Sunday touching their foreheads to their chest or upper stomach, then from the left side to the right side of the breast, and often ending in the center, forming a cross and hoping for God's blessing: In the name of the Father, and of the Son, and of the Holy Spirit. Amen.

I was very young but understood the rituals of the church, food, domesticity, and behavior in my family. My father's side of the family was similar — Episcopalian of Southern descent, not Caribbean. My other Grandma, Marion (also in Uhuru) — her sisters and her daughters, my aunts, didn't play with me either, but were just a tad looser and fun. They lived in downtown Manhattan on the Lower East Side, just under the Brooklyn Bridge. When I'm doing something mischievous, even now, my mother says, "that's your Davis side."

My mother's best attempts at keeping me on the straight and narrow path included not only taking me to church but also enrolling me in dance programs at Dance Theatre of Harlem and sending me on playdates with my best friend Jessica, also of the Bronx, whose mother held the thick Caribbean accent that my own family didn't. But our families' values were the same. My friend Jessica's father was a pastor and was similarly connected to the church, morality and innocence.

I'm the perfect mixture of uptown and downtown New York City, with the gumption of a Baltimore marching band on Martin Luther King Day sashaying up past MLK + Madison Ave. in full sparkles and curled clip in ponytails. In 1998, at around the age my eldest daughter is now, I moved to Baltimore. In Baltimore the summers were hot, and I don't just mean the sun. My hips, akin to those marching bands, had widened, sashaying and finding their own rhythm, no parades needed.

With the same spirit of my daughter asking to come with me, I grew curious about the kiddie discos my new best friend SRG would tell me about. Over time I also grew awfully curious about the neighborhood boys with their cornrows or long locs, white t-shirts, Girbaud jean capris and, I suspect, dimebags in their Nike tube socks that her older sister would entice from my apartment window with a towel.

Whilst SRG and I would be just below the sill of the window with cups of water to help her freshen her double D's perched above the terry cloth, they'd gesture to her with open arms from three floors below, flapping the sleeves of their oversized tees in the wind like the angels some of them would become. They'd yell, "Ayoooo, what's up with that though!" That meant pussy. It both entertained and baffled me how they managed to avoid the oversight of their own conservative mother, whom we'll call Ms. T. Much like the other women who raised and influenced me, she was also into the church. And she was the first of them all to warn us against boys, men, movies, music, and the influence it held for us. May Ms.T rest in her freedom as well.

Far from the innocence of marching bands or playdates with Jessica on Matthews Ave in the Bronx, at 19 I became pregnant with the child of a guy from East Baltimore. I'm not sure my family on either side was thrilled. If my Grandma had been there, I think her eyes would've been at their sharpest. There were more whispers than direct conversations about the matter. But overall, there was acceptance. My mother was in full support of my love — not only for my boo, but for my unborn children — and that's all that mattered to me.

I birthed two children in just under three years, one out of wedlock and one in. My union to my ex-husband was everything you'd expect a 19-year-old pregnancy-induced marriage to be: Xbox and a love for strawberry milk brought us together. He moved into my mom's house with me within two months. We were best friends at one point. We understood each other like an angsty teenager and a slightly older security officer living in his own mother's basement with two prior kids and a baby mama would.

By year three and a half I realized that my ambitions had outgrown simple nights laced with bowls of Lucky Charms (yes, with strawberry milk) and playing Dance, Dance, Revolution and NBA 2k while our infant and toddler slept. I was growing exponentially, with dreams of performing, writing and actually paying bills on time. My dreams became his nightmares. After four years and two evictions, we called it splits. He didn't share or support my dreams, however in reach they were. I could no longer accept housing insecurity and was not willing to become complacent about changing diapers in the backseat of our Chevy Malibu or on the scuzzy sheets of the motel behind the old Loafers on Caton Avenue.

Now I was a single mother. With my mother at my side, I looked to the women in my family and communities who came before me to develop my parenting style. Conservative parenting is all I've known, and all that has served me.

I reconnected to my artistic roots over the last decade, thanks to my mom planting those seeds all those years ago in those Dance Theatre of Harlem classes. Through the arts I've created a world for myself that is also rich with activities I had been warned against my entire life, and I've decided that shows and readings with lascivious content, dim lighting, and plenty of alcohol are no place for my children. While I personally love the characters I've met over the last decade in the arts scene, not all of them would be the best influence on very impressionable children. When I'm out with my folks we yell, cackle and rattle on loudly about our indiscretions over bottles of what some of them call yak. I prefer a good whiskey myself; my daughter calls it "Mommy Juice." I avoid drugs, but some of my friends and associates do not, and the erratic behaviors associated with people in their 20s and 30s who mix in enough coke lines are enough to convince me to keep my worlds separate.

My mother was a master of conservatorship and discerning energy during my youth, and she still is. That good judgment met me through all the women in my life, and I owe it to them to instill it in my children — even when I choose to ignore my own.

Sheltering gets such a bad rap. Shelter in the most literal sense means to protect or shield from something harmful. Even though we don't like to admit it, our behaviors can be harmful to one another. They can also cause us to be who we are. As a child, I thought all the times I heard no were causing me harm. Outside of not being able to relate to other women's stories about going to kiddie discos only to have semi-soft prepubescent phalluses pressed against their asses, I didn't miss shit. My children are being children. They aren't missing shit either.

I'm not naive. The powerful women in my life weren't and aren't either. Each of us found trouble for ourselves in our own time. My daughters will likely find theirs; I don't negate that. But when they do they'll be able to find their way back to shelter from whatever it is, through the values of a long line of women with darker skin like their own, with stories like their own, with eyes, curiosity and God's favor like their own. The next time either of them asks to come out with me, the answer will still be no, with love — and with all the fervor my mother, Leslie, Grandma Alice, Mrs. Watson, and Ms. T passed down to me.

Alanah Nichole Davis is a mother of two, writer, curator and performance artist from the Bronx and based in Baltimore City, where she is completing her Master of Arts in Social Design at the Maryland Institute College of Art. Davis has been published in Baltimore Magazine, Baltimore Business Journal, BmoreArt and Technical.ly, and has performed and spoken at many universities and venues, including Johns Hopkins University, Coppin State University, Baltimore’s City Hall and the Reginald F. Lewis Museum.