Hugh Laurie classes up political scandal in David Hare's new drama, but maybe we're too scarred to be thrilled 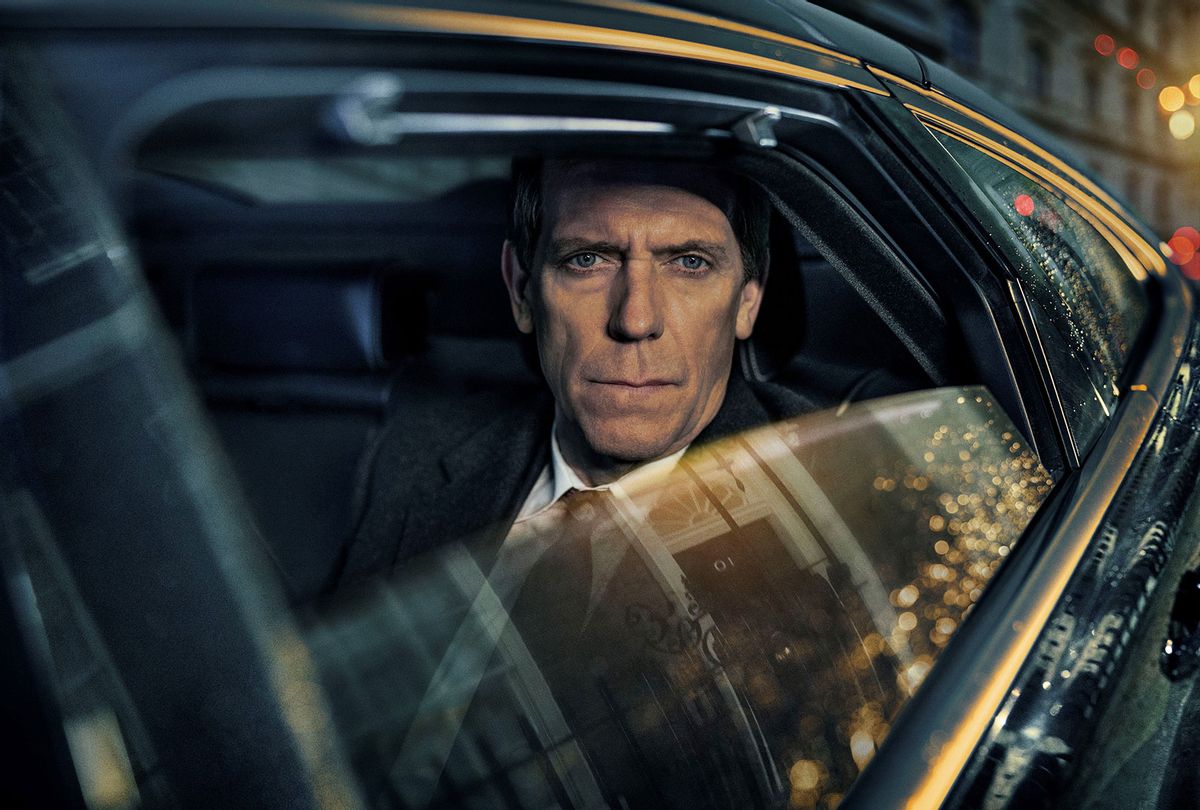 Corrupt politics, greedy public officials failing upward – it's all so tiresome and depressing, isn't it?

But damn if it doesn't go down more smoothly in a British accent. Usually, I should say.

"Roadkill," the latest "Masterpiece" limited series from Oscar-nominated screenwriter and playwright David Hare, tests that theory with prismatic tag-along through the a rocky chapter in British government minister Peter Laurence's career. Played with a rakish confidence by Hugh Laurie, we're introduced to Peter as he's walking out of court, victorious in libel case alleging that he lied about an attempt to use his office for financial gain.

As soon as the politician is safely ensconced in his car he breathes a sigh of relief, making it obvious that he succeeded despite his guilt, come what may to the people harmed by his actions. What he's guilty of, exactly, isn't made clear at first. Made more obvious straightaway is that he has a deep bench of enemies with scores to settle and false allies who wouldn't mind bringing him down a peg. And it's easy to see why that is.

Laurie plays his character with a healthy dose of smugness barely masked by false humility, presenting Peter as the familiar type of political figure who comes across as an even-keeled, trustworthy man of the people skilled in the art of smiling gently in his constituents' faces while he's picking their pockets. In other seasons and other shows, this sort of rake is an easy charmer, a solid sell. After watching all four hours of "Roadkill," I'm not so sure if Laurie's efforts to channel that kind of magic works as well here.

Still, he's a solid lead to an impressive cast that includes Helen McCrory as scheming prime minister Dawn Ellison, who posits that keeping Laurence close is better than pushing him away and therefore making him a threat to her political position. Of course, this doesn't take into account the designs other have on shaping the government and the role a man like Peter could play in those strategies . . . if he can keep his assorted secrets hidden away.

Unfortunately for them, and for Peter, the list of those he's wronged is quite lengthy, starting with Charmian Pepper (Sarah Greene, "Normal People") the journalist whose reputation he ruins through chicanery; his wife Helen (Saskia Reeves), who he persuades to lie for him; his mistress Madeleine (Sidse Babett Knudsen), whose career ambitions he thwarts in order to keep her nearby. We're not done. Peter's overworked right-hand man oversteps his boundaries too frequently for such behavior to be accidental. Then there's barrister who successfully defends Peter but suspects he's actually guilty and can't let the case go. And there are others I could mention, but that would ruin some of the miniseries' best surprises.

Hare is equally focused on writing towards Peter's concern over getting away with whatever he can and his inadequacy as a powermonger. What's interesting is that this very quality enables him to float up the ladder as opposed to fighting for a toehold on every rung. Because of this "Roadkill" come across as flaccid in key points despite Laurie's charm and his best efforts, alongside that of its stellar cast.

"Roadkill" will keenly make you aware of how much more devilish goodness existed in similarly themed series such as the British version of "House of Cards," and how exciting it is to see a story that validates our assumptions about the soullessness of the sorts of figures who enter the viper's pit of governance. But while it attempts to say something about the dangerousness of banal characters and the people around them, it doesn't quite make that case in a clear and compelling away.

"Roadkill" is only as good as its performances, and to its good fortune and ours the series boasts strong turns across the board.  But in a series that takes its title from the concept of avoiding political failure it's disconcerting to feel as if we have to work to be shocked or incensed by each of Peter's scandals and figure out how and if each connects to others. Only after it's all on the table does one realize that his evildoings are fairly quaint compared to the real-life dirty dealings of politicians across the pond and in our backyard.

Maybe it's the times in which "Roadkill" is coming to us, smack in the middle of an election cycle asking voters to choose between four more years of a monstrous, destructive president or replacing him with the human version of valium. Peter's troubles and the damage he causes are terrible in close-up, but seen through a broader lens grimed up by reality, they're almost tolerable.

Perhaps that's the scariest part of watching "Roadkill," the fact that at the end of it all, even as we see Peter setting himself up for hardest falls at the expense of other people, and even as the people around him appear poised to push him over that cliff, one has to strain to care.