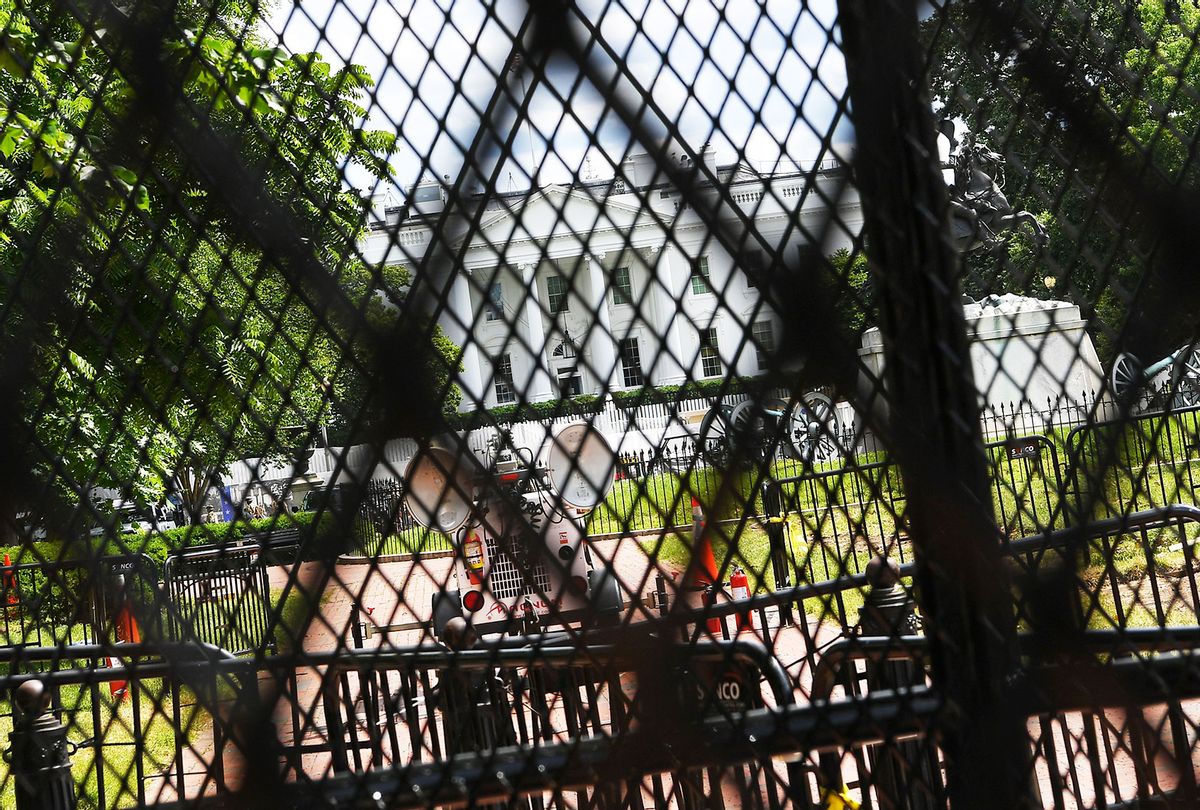 The White House is seen through several layers of recently erected security fencing and barricades from the north side of Lafayette Square in Washington, DC, on June 5 2020, amid ongoing demonstrations over the death of George Floyd in police custody. (MANDEL NGAN/AFP via Getty Images)
--

Federal authorities are expected to erect a "non-scalable" fence around the White House ahead of Tuesday's election amid concerns of civil unrest.

Federal law enforcement agents will erect the fence around the perimeter of the White House complex, the Ellipse and Lafayette Square, NBC News' Geoff Bennett reported as he described a "White House on lockdown." About 250 National Guard troops have been put on standby, according to the report.

CNN confirmed the development, noting that a similar fence had been erected during Black Lives Matter protests over the summer. The Secret Service reportedly rushed President Donald Trump and his family to the White House's underground bunker during a protest against police brutality following the death of George Floyd.

The new fence comes as Trump plots to fight the results of the election as polls show him trailing badly across the nation and in key swing states.

"We're going to go in the night of," Trump declared on Sunday during a rally in Charlotte. "As soon as that election is over, we're going in with our lawyers."

Trump has told allies that he plans to announce victory prematurely if it appears he is ahead, Axios reported on Sunday. It is very possible that early results show Trump ahead in certain swing states before mail-in ballots, which have been overwhelmingly sent in by Democrats, are counted.

The nation's capital has been on edge ahead of the election, with some businesses boarding up windows.

"It is widely believed that there will be civil unrest after the November election regardless of who wins," D.C. Police Chief Peter Newsham told the city's lawmakers last month. "It is also believed that there is a strong chance of unrest when Washington, D.C., hosts the inauguration in January."

The new fence will go up ahead of Trump's election night party at the White House after plans were scrapped to host it at his Washington hotel, according to The New York Times and Reuters.

The event was supposed to be a "small gathering," but it is now expected to pack in about 400 attendees in the East Room amid the coronavirus pandemic, according to The Times. The party will be held after Trump, his wife, youngest son and numerous other allies and attendees tested positive for COVID-19 following a White House event to announce Supreme Court Justice Amy Coney Barrett's nomination earlier this fall. Washington recorded its highest number of new cases since June over the weekend.

Biden, meanwhile, plans to spend election night in his hometown of Wilmington, Del., according to his campaign.

The planned White House event raised concerns about safety. A recent Stanford University study estimated that at least 30,000 infections and 700 deaths had been linked to rallies Trump held between June and September.

Dr. Anthony Fauci, the director of the National Institute of Allergy and Infectious Diseases, warned over the weekend that indoor gatherings could result in large infection spikes during the fall and winter.

"We're in for a whole lot of hurt. It's not a good situation," he told The Washington Post, adding that the country "could not possibly be positioned more poorly."

Fauci's comments came after the U.S. hit a new record-high of nearly 100,000 new cases on Friday and after at least 31 states hit one-day record highs in the past month.

Trump, during a rally in Florida on Sunday, suggested he may fire Fauci, who has served as the nation's top infectious disease expert since 1984, after the election. Under federal law, Trump does not have the power to directly fire Fauci. The president could order political appointees to dismiss him, though Fauci could appeal such a move.

"Don't tell anybody, but let me wait until a little bit after the election," Trump told a mostly maskless crowd. "I appreciate the advice."

"One candidate has said he will make Fauci his top medical advisor on the pandemic. The other says he intends to fire him," Ron Klain, the former Obama administration Ebola response czar who is rumored to be Joe Biden's chief of staff pick if Democrats win the election, wrote. "You decide which is the best path to protect your family, and get our country going again."