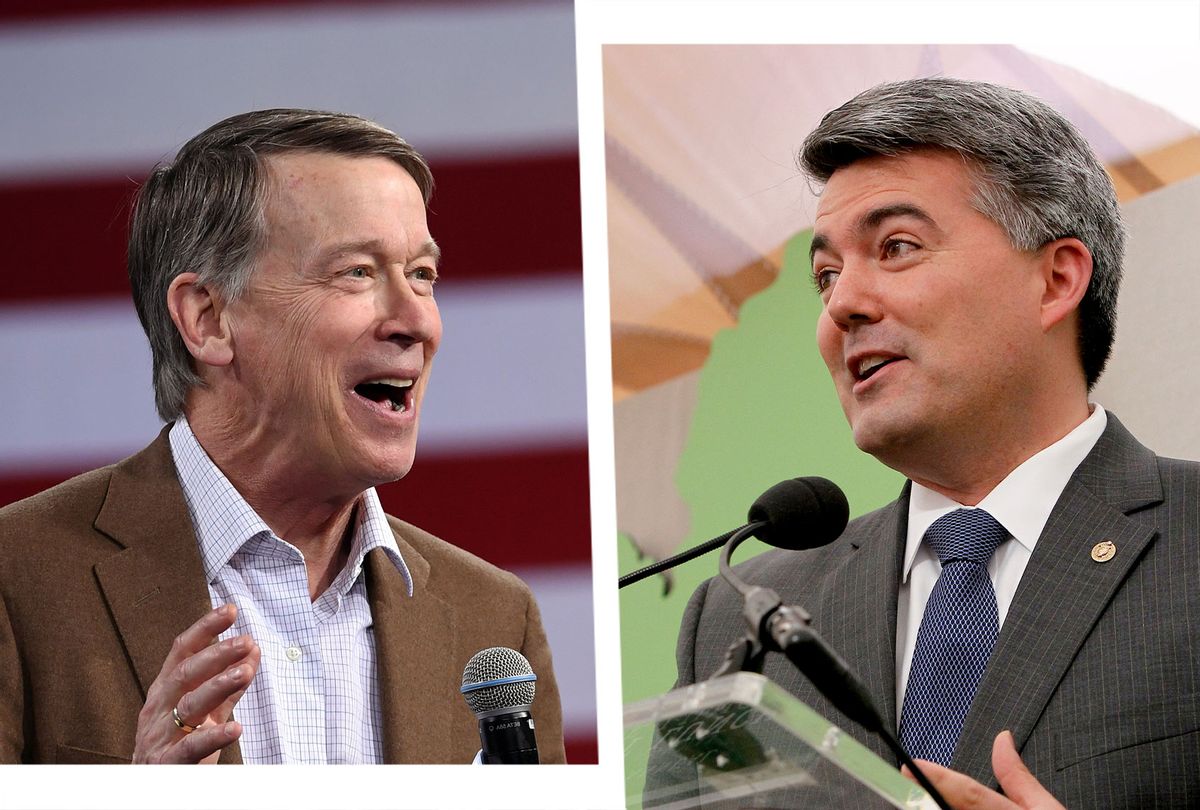 Former Colorado Gov. John Hickenlooper has defeated Republican Sen. Cory Gardner, according to the Associated Press. It's the first Democratic pickup of this election. Democrats will need to gain three seats to win a Senate majority if Joe Biden is also elected president — and four seats if President Trump is re-elected. At this writing, Hickenlooper leads Gardner by 56% to 42%, with 69% of precincts reporting.

From the beginning, the Colorado Senate race seemed one of the most likely opportunities for a Democratic win. Gardner was elected in 2014 by less than 2 percent of the popular vote — less than 40,000 votes in all, in a strong midterm year for Republicans. Colorado overall has trended blue in recent years and has supported the Democratic nominee in every presidential election since 2008.

Hickenlooper ran as a moderate, and focused on issues like fighting the pandemic and creating better health care reform. He sought the Democratic presidential nomination in the 2020 cycle, although he dropped out of the national race in August 2019 and announced his Senate campaign later that month. In an interview on Monday, Hickenlooper talked about uniting the progressive wing of the Democratic Party epitomized by Rep. Alexandria Ocasio-Cortez, D-N.Y., with the more moderate wing he represents.

"If you look at the large-scale goals, we all want to make sure that we have a health care system that covers everybody and that is affordable, that we don't keep spending more and more money on our health care system," Hickenlooper told Salon. "We all agree that climate change is an existential threat, and we've got to bring people together and address it aggressively. We all agree that the economy no longer favors middle-class people trying to improve their place in the world and has become too heavily tilted towards the largest corporations and the wealthiest individuals."

He added, "These are all visions that are shared by the progressive wing and the more moderate wing of the Democratic Party. We just disagree on what the most effective tactics might be to achieve these goals."

Hickenlooper also said that he would prioritize "addressing COVID-19 and rebuilding our public health infrastructure," adding that "a pandemic is not a bad time to really focus on making sure everybody's got health insurance. I think we're going to have to pivot immediately and deal with the economy and the damage that's been done by the negligence and the incompetence of the response that came out of the White House."

For weeks prior to the election, polls showed Hickenlooper with a comfortable lead over Gardner, with a margin varying from eight to 14 points. Gardner repeatedly tried, and failed, to walk a fine line between pleasing supporters of President Trump without alienating moderates. Gardner sided with Trump on a number of controversial issues: Backing a repeal of the Affordable Care Act with no replacement legislation, voting to confirm Supreme Court Justice Amy Coney Barrett and supporting Trump when he appointed former fossil fuel to head the Environmental Protection Agency (EPA). Although Gardner distinguished himself from other Republicans on rare occasions — such as by admitting that man-made climate change is a scientific fact — he voted with Trump on nearly 90 percent of the issues that came before the Senate.

Gardner's tendency to try to please both the pro-Trump and moderate camps was epitomized during his debate with Hickenlooper last month. When asked if he believed that Trump is a moral and ethical man, Gardner replied "yes" before adding, "I wish he would be more specific in his communications with the American people." Previously, when Trump was caught making derogatory comments about women in a 2005 "Access Hollywood" tape released during the 2016 presidential election, Gardner said he would not vote for Trump and urged the candidate to step aside.