Why is this election even close? Because Trump voters will walk off a cliff rather than admit they were wrong 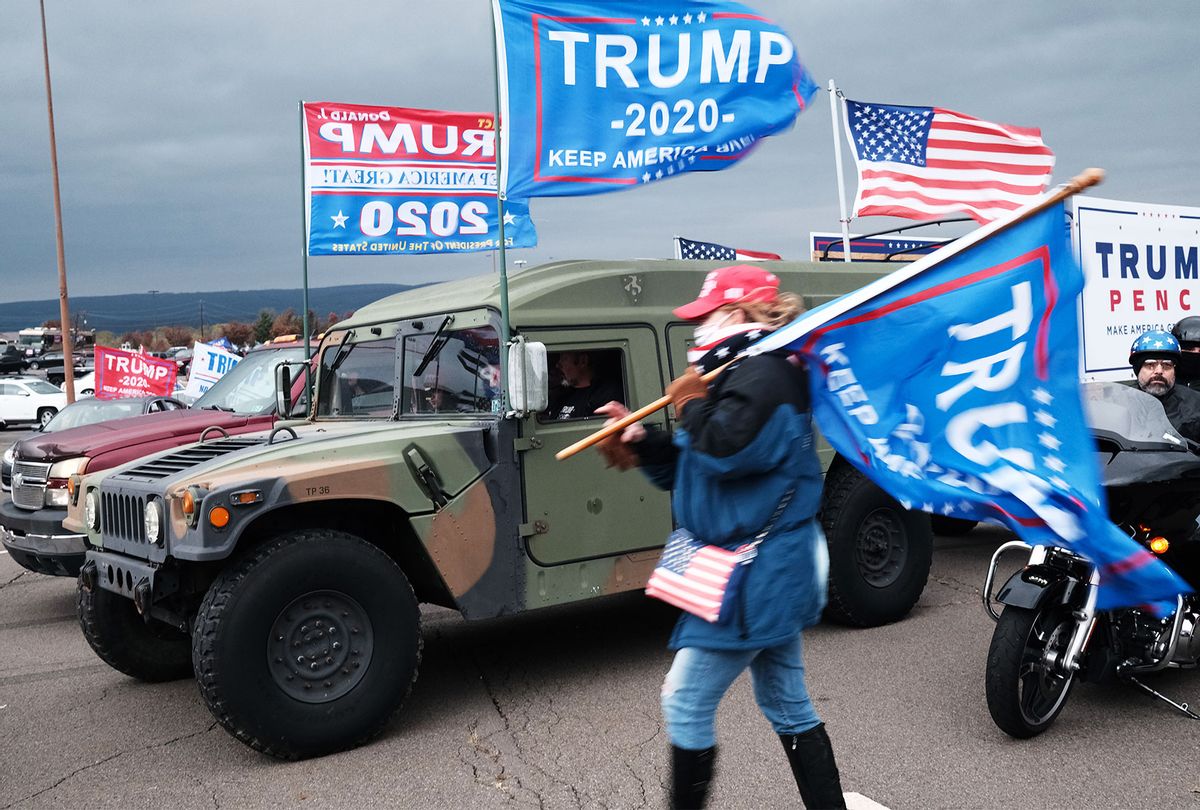 Supporters of President Donald Trump participate in a car and motorcycle rally at a mall on November 1, 2020 in Wilkes-Barre, Pennsylvania. President Trump is campaigning in the crucial state of Pennsylvania before the U.S. presidential election on November 3. (Spencer Platt/Getty Images)
--

The orange spray-tan was barely wiped off Donald Trump's inauguration Bible before the mainstream media went on Trump Voter Remorse Watch. Working off a common but incorrect understanding of human psychology — that, given evidence and time, people come to regret their worst decisions — journalists kept interviewing Trump voters over and over, in "heartland" diners and farm fields and gargantuan exurban malls, in search of evidence that doubts were starting to creep in.

I found the whole thing exhausting fairly quickly. In June 2017, I published an article in which I concluded, after interviewing psychological experts, that "the answer to the question of when Trump voters will come around is somewhere between 'a long, long time from now' and more likely 'never.'"

Here we are, three and a half years later, and things have gone even more poorly than we could have imagined. Trump was impeached for trying to extort a foreign leader into smearing a political opponent, the economy is in the toilet and getting worse, and 231,000 Americans have died in a pandemic that spiraled out of control, largely due to Trump's malicious incompetence.

And yet: Trump's approval ratings remain at a stubborn 44.6%, which is only 1.3 percentage points below the popular-vote share that was enough to snag an admittedly flukish electoral victory in 2016. His rating has slipped a few points below that level here and there, but it always bounces back. Right now, it's as robust as ever, and the vast majority of the people who voted for him in 2016 are clearly doing it again, while telling themselves a story about how this is justified because — seriously, they're telling themselves this — he's doing a good job.

Former Vice President Joe Biden leads in all national polls and most battleground states, but many Democrats are still sweating bullets in fear. That immovable approval rating shows that Trump has an electoral path to do it again, defeating a more popular opponent by appealing to conservative white voters in rural and suburban areas whose votes are hugely overvalued compared to people in big cities and major coastal states, thanks to the anachronistic and anti-democratic design of the Electoral College. That stubborn approval rating has been the stuff of nightmares for four years, the monster lurking in the closet in the horror film, ready to spring out at any moment and tear your throat out, while you scream helplessly.

That's why, I suspect, the Trump Buyer's Remorse Watch pieces in the mainstream media never really ended. Even in these last waning days of the campaign, journalists are still digging up Americans who claim to regret voting for Trump and say they'll now voting for Biden.

These articles certainly generate traffic from liberals who, fearful of what is happening to our country, cling to even the smallest shred of evidence that things may be turning around and "normalcy" may be reasserted. But these articles are mostly wishful thinking. Not that such people don't exist at all — they do! — but they're outliers, so much so that they barely register in the polls.

The real story is that Trump voters don't regret their votes. Odds are, in fact, that they are more determined than ever to back their man. Part of it is that Trump voters remain deeply committed to racist and sexist values — and deeply resentful of being called out for that.

But as I wrote in my original article, this also reflects the psychological concepts of "cognitive dissonance" and "rationalization." As psychologist Carol Tavris told me in 2017, most people want to believe, "I am a smart person." That's contraindicated by a vote for Trump, however. Instead of admitting they were wrong in the first place, many Trump voters dig themselves ever deeper into rationalizations for why they were right, and why anyone who says otherwise has nefarious intent.

That defensiveness is only heightened because the people who were right all along are liberals. The ego blow of admitting that they were wrong and the despised latte-sipping liberal "elite" was right is too much for most Trump voters. So they'll cling to anything — including completely outlandish QAnon conspiracy theories — to craft a narrative where they're actually the smart ones and the liberals are not just wrong but evil and immoral.

A third concept — the sunk cost fallacy — is also useful here. That's what happens when a person invests significant resources — often money, but it can also be time, energy and emotion — in a bad endeavor, but keeps investing more out of a reluctance to admit they made a mistake and "wasted" those resources. It's why gamblers keep betting after losing a big chunk of money, trying to win it back. It's why people stay in bad marriages, fearful that leaving means "losing" the time and energy they invested. It's why people stay in cults. Cutting bait and moving on may be more rational, but the pain of admitting you sacrificed so much for nothing is hard. People often simply can't or won't do it — and usually end up losing even more.

Trump voters dug their heels in so hard because voting for Trump was understood, from the beginning, as a more fraught choice than voting for a more standard Republican. They invested more of themselves — more of their ego, more of their reputation — in this choice, and therefore the sunk costs of admitting they were wrong are much higher.

It's one thing to admit it was wrong to vote for, say, George W. Bush, who even many liberals mistakenly viewed as relatively harmless during the 2000 campaign. But from the moment he announced his run, Trump asked a lot of his supporters: Overlooking the numerous alleged sexual assaults, denying the blatant racism, ignoring the corruption, pretending not to see he's an idiot.

Admitting at this late date that the whole Trump venture was a huge mistake feels like giving up on all that time and energy. So Trump voters double down like gambling addicts at the roulette table, pouring more emotional resources into the black hole of Trump, in hopes that eventually this will pay off.

So there's really no limit to how bad this can get.

I realized this a couple of years ago, when I was hanging out with a Trump voter in my life. During most of our time together, I held my tongue about politics, knowing that anything I said would just make her defensive and likely to dig in harder. At a certain point, two alcoholic beverages loosened my inhibitions and I reminded her of Trump's adoration for dictators like Vladimir Putin and his obvious desire to be more like them.

Sure enough, she defensively replied, "What's so wrong with Putin, anyway?"

"For one thing, he has journalists murdered," I said.

Angrily, she retorted, "Sometimes I don't see the problem with that."

I reminded her at this point that I'm a journalist. She muttered at me angrily but, notably, did not apologize or take back what she said.

It was at that point that I saw how it happens.

I mean, I've always known it academically — many of us are familiar with Hannah Arendt's writing about authoritarian tendencies — but it's another thing entirely to look someone you know in the eye and realize they would stand by and let it happen to you.

To realize that there's no point where it gets too bad to be acceptable, where the human rights violations are so badly out of control, where democracy is taken away. We've seen kids in cages. We've seen close to a quarter-million Americans die. We've seen Trump tear-gas peaceful protesters and applaud right-wing political violence.

There is no point where they say that enough is enough. Not even if people in their lives, their friends and family, are the ones in danger.

By any rational standard, we keep telling ourselves, this election shouldn't be close. We shouldn't even have to worry that Trump, with his record of massive failure and obvious corruption, should be close enough that he could still steal this — or even, heaven forbid, win outright. But this is where we are, chewing our fingernails and praying that small shifts at the margins save us. Because 44.6% of our country would rather burn the whole thing to the ground than admit that liberals had a point.

Even if Joe Biden pulls this out, this country remains in real trouble.