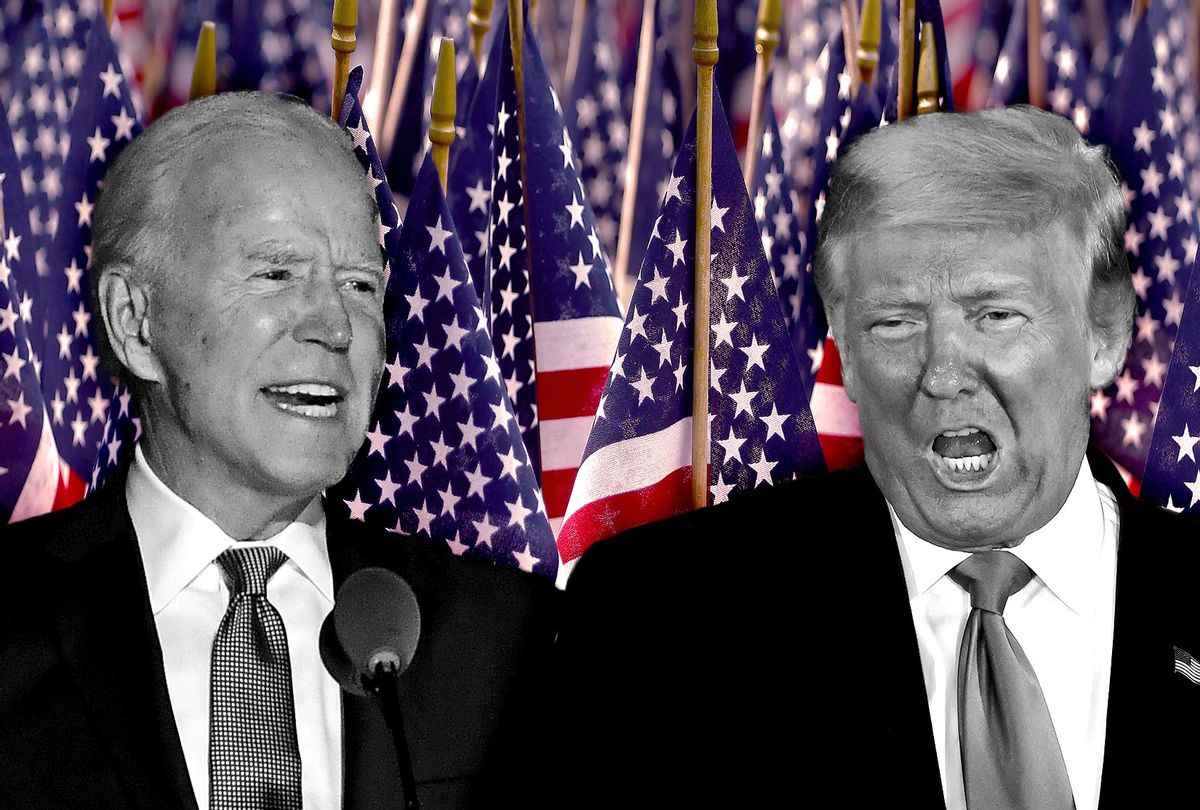 Democratic presidential nominee Joe Biden appears to have a clearer path to victory as key swing states continued to count ballots on Wednesday. Meanwhile, President Donald Trump's campaign will seek a recount in Wisconsin, where the Associated Press declared Biden the victor on Wednesday afternoon, and seek to stop vote counting in Michigan and Pennsylvania.

The AP called the Wisconsin race after election officials said earlier in the day that Biden had won the state by more than 20,000 votes with all ballots counted.

Trump campaign manager Bill Stepien said in a statement that the president would immediately seek a recount in the state, claiming without evidence that there were "irregularities" in several counties that "raise doubts over the validity of the results." There has not been any evidence of irregularities which may have swung the race, though the president has repeatedly demanded that states stop counting valid votes submitted before polls closed.

Trump claimed on Twitter that poll workers were "finding Biden votes all over the place," referring to the counting of valid votes. He also falsely and prematurely declared victory early on Wednesday morning, even as outstanding ballots in delegate-rich states like Pennsylvania and Michigan could put Biden on a path to clinching the 270 electoral votes he needs to win. Those two states, along with Wisconsin, were not allowed to start counting absentee ballots until just before or on Election Day, in no small part because of the actions of Republican-led state legislatures.

Former Wisconsin Gov. Scott Walker, a Republican, argued that the margin was a "high hurdle" to overcome as he recalled how a recount of the 2016 presidential race in the state sought by then-Green Party candidate Jill Stein moved only 131 votes.

"20,697 is a small-enough margin for Trump to request a recount under Wisconsin law (he's within 1% of Biden), but a big-enough margin where the recount has almost no meaningful probability of affecting the result," Steve Vladeck, an election law expert at the University of Texas at Austin, wrote. "Florida in 2000, in contrast, ended up divided by 537 votes."

The campaign also prematurely declared victory in Pennsylvania and said it is seeking a Supreme Court order to stop the counting of late-arriving mail ballots in the state.

"We are declaring a victory in Pennsylvania. This is not based on gut or feel. This is based on math," Stepien said on a call with reporters even though well over 1 million votes cast before polls closed are left to be counted.

"Pennsylvania is still counting the mail-in ballots that arrived *on time.* The fight over whether it can count late-arriving ballots may not end up mattering," Vladeck noted, adding that "they're doing this because they're losing."

"There's just no remotely plausible legal justification for stopping the count now," he wrote. "Especially in a state like PA, most of the ballots that are left are the ones that came in *first.* Let them finish first; then go to court if need be."

The campaign said it had also filed a lawsuit in Michigan to "halt counting" until "meaningful access" is granted to Trump campaign observers.

"We also demand to review those ballots which were opened and counted while we did not have meaningful access," Stepien said in a statement.

Biden has won mail-in votes in Pennsylvania by an "overwhelming margin," according to The New York Times' Nate Cohn, who noted that the former vice president would "win the state" if current trends hold. Biden has won 78% of absentee voters in the state, and he would be on pace to surpass Trump if he maintains that margin. Only about half of the state's 2.5 to 3 million ballots have been counted, according to Secretary of State Kathy Boockvar, including just a fraction of the outstanding ballots in the Democratic stronghold of Philadelphia.

Though Trump appeared ahead in Michigan on Tuesday night after the Election Day vote was counted, Biden has taken a 38,000 vote lead in the key battleground state. He also leads in Nevada, which is not expected to announce final results until Thursday. If those leads hold, Biden would net 270 electoral votes without having to win any other states.

There are hundreds of thousands of ballots left to be counted in Michigan's largest cities, including Detroit, Flint, Grand Rapids and Warren, Secretary of State Jocelyn Benson said on Wednesday morning.

If Biden's lead in Arizona holds, he could afford to lose one of the Rust Belt states. However, Republicans have claimed that the race was prematurely called by the AP and Fox News. At least 400,000 ballots are left to be counted in the state, according to The Arizona Republic. Biden's lead stands at more than 90,000 votes.

Ballots in Georgia are still being counted after the vote count in an Atlanta area was disrupted by technological malfunctions and a broken pipe. There are tens of thousands of ballots left to be counted in Atlanta and its suburbs. The dreaded New York Times needle gives Biden a slight 0.4% edge in the state, which would further shrink Trump's path to victory. Trump currently leads the official count by less than 90,000 votes.

The needle gives Trump a slight edge in North Carolina. The state will count ballots received up to nine days later with a postmarked of Nov. 3. There are more than 117,000 outstanding absentee ballots in the state, according to the Board of Elections. It is unclear how many of those were submitted in time. Trump's lead has been cut to about 80,000 votes in the state.

Nevada is also expected to release an update on Thursday. Biden currently holds a narrow 10,000-vote lead with many mail-in votes outstanding.

"We believe we are on a clear path to victory by this afternoon," Biden campaign manager Jen O'Malley Dillon told reporters on Wednesday. "I want to share with all of you that Joe Biden is on track to win this election, and he will be the next president of the United States"

Dillon said the campaign expected that it had already won Wisconsin and would win Nevada.

Trump campaign manager Bill Stepien claimed that Trump would win if "all legally cast ballots" are counted. Trump, in remarks from the White House, baselessly alleged that Democrats were trying to cheat by having all of the outstanding votes counted.

Stepien predicted that the president would win in Pennsylvania, Nevada, Michigan, Georgia and even Arizona.

Top campaign adviser Jason Miller said the campaign was in a "full-court press to make sure we have all our legal teams that are in place." Trump vowed that he was "going to the U.S. Supreme Court" during his remarks, though legal experts said the president does not have a case to bring.

"These are all legally cast votes, and the process of trying to toss them out for some reason would just I think be viewed by any court, including the Supreme Court, as just a massive disenfranchisement that would be frowned upon," longtime Republican election lawyer Ben Ginsberg told CNN.

"It doesn't work that way. The president doesn't count these votes," Pennsylvania Attorney General Josh Shapiro told ABC News. "The legal issues have largely been settled. And now it is time to count these votes and make sure that the will of the people is heard."

Wheras Trump made false allegations of cheating and inaccurately claimed that he had won states where he trails, Biden urged patience among his supporters during remarks in Wilmington, Del.

"It's not my place or Donald Trump's place to declare who has won this election," he said. "That's the decision of the American people."

Though Biden lost Texas, where some Democrats hoped to make inroads, and Florida, where polls showed him ahead before a surprisingly strong showing by Trump among Cuban-Americans, his projected win in Arizona greatly improved his chances. Biden also picked up Nebraska's Second Congressional District, meaning he could win the presidency without having to win Pennsylvania.

Even if Biden comes out on top, the night was not what many Democrats had expected. Democrats appear to have little path to winning a majority in the Senate after losing in South Carolina and Iowa and trailing in Georgia, Maine, Michigan, and North Carolina. While the Democrats are expected to ratain control of the House, they lost at least a half-dozen seats on Tuesday.

Still, turnout in the election is estimated at over 66%, the highest number in 120 years, according to the U.S. Elections Project. FiveThirtyEight founder Nate Silver estimated that Biden will end up with the largest number of votes in presidential election history once all the ballots are counted.