After 2020, we face an existential struggle: What does it mean to be an American? 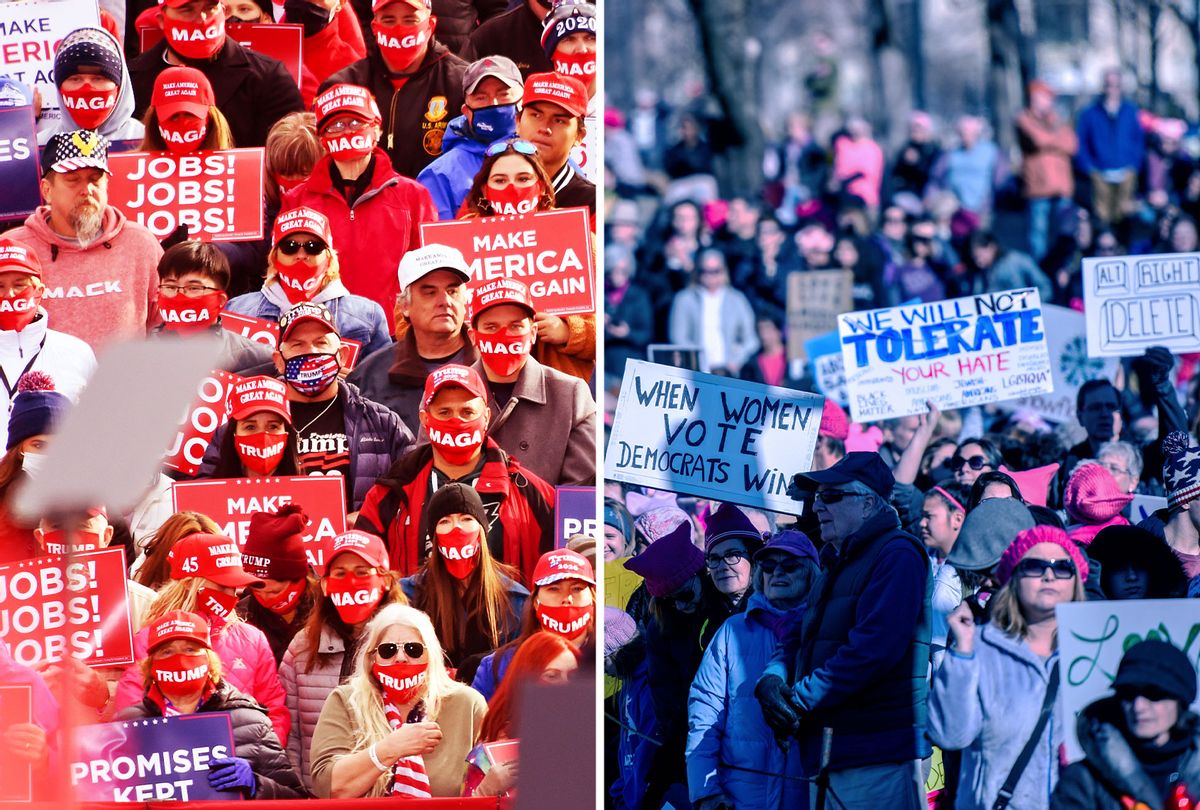 I grew up in right-wing America, but I got out as soon as I could. No one was surprised. From an early age, it was clear my inclinations were what you might call "Weimar American" or what a lot of people around me called "weird": More interested in reading than watching TV, invested in pop music trends, and intrigued rather than repulsed by the idea of meeting people who were different than me, or eating foods I hadn't heard of before.

"You're a New Waver," some kid snarled at me in class one day in, I kid you not, 1993. I didn't have the heart to tell him that term was going out of style when he was a toddler.

Now, as an adult, I shop at the farmer's market. I'm middle-aged, but I know what "trap music" is. I have opinions on the newest seasons of "The Great British Baking Show," versus the older ones. I lament the decline of bookstores, but still buy actual books online. I read mainstream newspapers and eat Vietnamese takeout. I've been to same-sex weddings and the Women's March. I've uttered the phrase "the Golden Age of Television."

I say these things not to congratulate myself for being hip, but quite the opposite. I'm not hip at all — I'm an extremely normal American. Sure, I've lived in liberal cities — first Austin, then Brooklyn and now Philadelphia — my whole adult life. Still, the America I know, where the movie "Get Out" was a huge hit and the Dixie Chicks did nothing wrong — is mainstream America.

Americans like me populate the small towns and suburbs too, as the summer of Black Lives Matter protests and Biden/Harris signs demonstrated. There are many flavors of us and many races, but the general values — appreciation for  diversity, acceptance of social change, cultural curiosity and empathy towards others — are the mainstream values of America.

Some of us are here as a matter of choice and some as a matter of circumstance, marginalized by immutable characteristics like race or gender identity or sexual orientation. Still, the fact that Democrats tend to win the popular vote in presidential elections over and over and over — with the 2020 result, that makes seven of the last eight — is evidence that the America that Donald Trump and his fans hate, the America they don't even want to admit is American, is mainstream America.

And frankly, Trump and his minions know it. Indeed, it's exactly the mainstream nature of this more liberal, cosmopolitan strain of American culture that explains why we're seeing such fierce, outsized anger from Trump voters. It's the reason for the flag-festooned truck caravans, video tantrums about having to wear face masks in public places, lurid conspiracy theories painting Democrats as blood-drinking pedophiles and the "MAGA" slogan. It's why they are willing to back a confessed sexual assailant who is obviously a sociopath, eagerly and enthusiastically.

It's because they see Trump as the vehicle to "take back" an American culture that they believe is being stolen by the rest of us, that is, the actual American majority.

Win or lose in 2020, Trump has done remarkably well for a president who let 232,000 Americans die and is abandoning millions more to sickness or poverty. That may seem inexplicable to many people who despise him, but it's ultimately because his voters see themselves locked in an existential battle with the rest of us over who gets to define what kinds of people and things are truly "American."

There's a lot of resistance on the left to the idea that our national crisis is over identity and culture, and not over something that's a little easier to get a handle on, like economics or ideology.

It's often noted in progressive circles that if you poll Americans on policy issues like universal health care or free college, broad majorities of Americans — including a plurality of Republicans — support many left-leaning and often "radical" policies. This is often taken as evidence that Democrats are losing because they're too timid, and that if they embraced a bolder, more progressive agenda, they would win.

As much as my heart wants to believe that, however, it isn't true. We know that because both Hillary Clinton and Joe Biden shifted toward the left — certainly in terms of recent Democratic politics — and it did nothing to improve their vote share.

Which isn't to say Democrats shouldn't embrace progressive economic policies. They should, because it's the right thing to do. But there's no reason to believe it will either help or hurt their electoral chances, because there's no way to win over votes from Trump America. That 45% of the country, which has outsized power due to the Electoral College and the unfair Senate system, is simply more worried about culture-war issues than about policy.

As Paul Campos at Lawyers, Guns, and Money wrote Wednesday morning, "the lesson of this election is it doesn't matter at all what a Republican president does or doesn't do — the people who vote for him literally don't care, as long as he gives them enough of what they want, and what they want is authoritarian ethno-nationalism and Owning the Libs."

There's been some good protest music in the Trump years. What is striking about a lot of it — such as Childish Gambino's "This Is America," Janelle Monae's "Americans" and RuPaul's "American" — is how much it's focused on this notion of what it means to be an American.

"I am American, American, just like you too," are the blunt lyrics of the RuPaul song, which plays at the end of every episode of RuPaul's show in recent seasons.

I'd argue that RuPaul is, if anything, even more American. He's a house musician, a drag queen and a game show host, all of which are American-born artistic traditions. That's no surprise, since so many of the things that make this country's culture interesting and unique and so beloved around the world come from the very people and subcultures that our authoritarian 45% resents so much: Queer subcultures, nonwhite communities, urban neighborhoods full of immigrants.

Even right wing America has a parasitic cultural relationship to the innovations of the same Americans they resent so much. From Trump fans dancing feebly to the Village People at his red-hat rallies to the way hip-hop beats are watered down and injected into crappy "bro country" songs by groups like the Florida-Georgia Line to whatever the hell Kid Rock is doing: The spirit of Pat Boone stays strong in this country, kept alive by people who want to steal artistic and cultural innovation from other Americans before they kick them in the face.

I wish I had more answers to our problems. I wish our elections could be about boring but important issues like health care and tax policy, instead of being used as a clumsy weapon in the culture wars. I wish that the 45% of Americans who don't get or don't like the slightly hipper and definitely more diverse majority would just chill out and leave us alone. I wish there was no Fox News and no Rush Limbaugh and no white dudes with bad tattoos who channel their masculine insecurities into buying guns and longing for "tradwives" on social media.

But I don't. It feels like an intractable problem, being held hostage by a resentful minority who only grow more toxic and bitter because they have way too much power over our electoral system. But it's the problem we have, and we won't even start to think of solutions until we look our problem directly in the face.