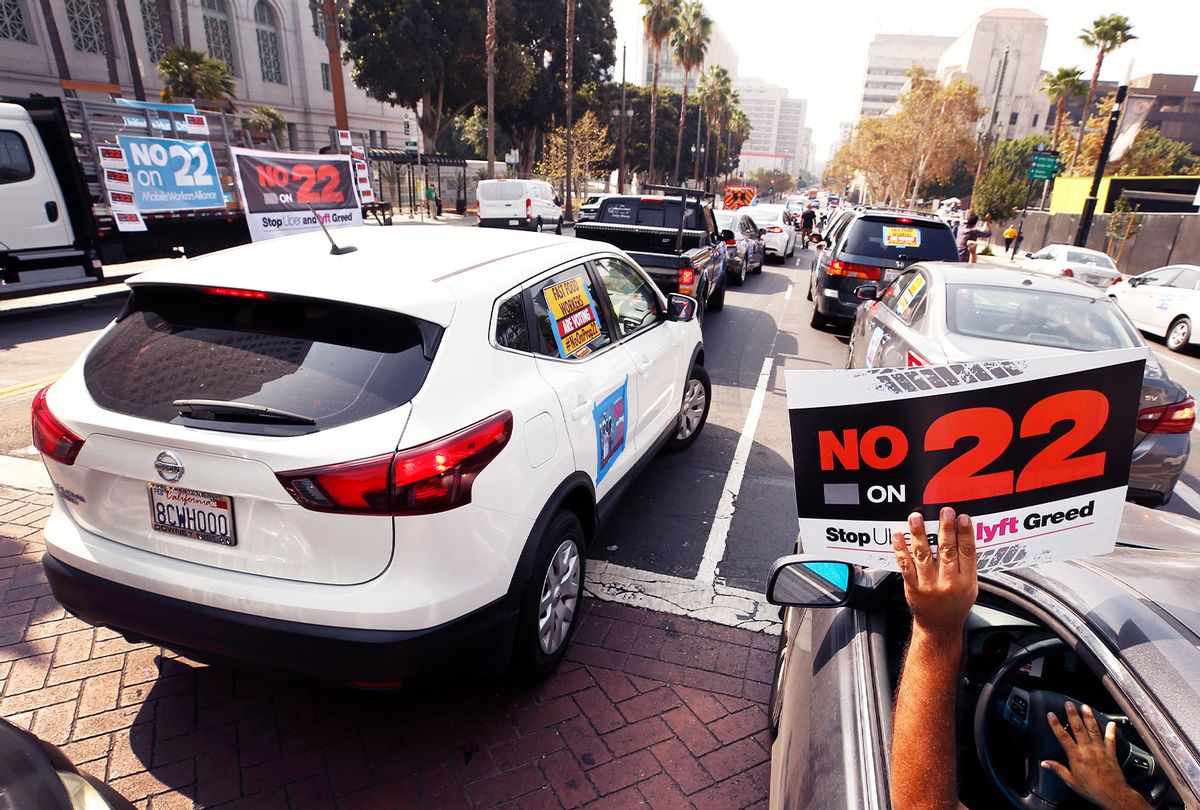 Rideshare driver Jorge Vargas raises his No on 22 sign in support as app based gig workers held a driving demonstration with 60-70 vehicles blocking Spring Street in front of Los Angeles City Hall urging voters to vote no on Proposition 22, a November ballot measure that would classify app-based drivers as independent contractors and not employees or agents, providing them with an exemption from Californias AB 5. (Al Seib / Los Angeles Times)
--

In California, voters approved Proposition 22, an anti-labor measure funded by contractor-reliant tech companies like Uber and Lyft which basically cements gig workers' employment status as independent contractors and prevents their access to the standard slate of benefits they would be entitled to as actual employees. The fight over Proposition 22 marked the most expensive ballot measure campaign in the history of the United States, largely due to spending by tech giants; because of the way it is written, it will require a seven-eighths majority of legislators be overturned, a near-insurmountable prospect, experts say.

The approval of the ballot measure comes after months of organizing by Uber and Lyft drivers and delivery drivers for Doordash and Postmates.

"We were up against the most expensive campaign in California's history and we put up a strong fight," said Cherri Murphy, an Oakland-based Lyft driver and organizer with Gig Workers Rising said in a statement. "Most of us believe that, no matter what we look like or where we live, we should all have an equal say in our democracy. But today, corporations won their greedy measure through dirty tactics and by lying to the people of California."

As Salon previously reported, Proposition 22 was the most expensive ballot measure contest in California — and the United States — in history. Labor experts told Salon they feared that a "yes" victory would be a major setback for labor rights, as the language of Proposition 22 would likely keep drivers at these companies from unionizing, and will leave them without guaranteed paid sick and leave days. It will also prevent many gig workers from attaining health insurance benefits, despite promises from the tech companies funding the measure to the contrary. This is in part because drivers only qualify for the benefits based on their "engaged time" on the app, meaning the time between accepting a ride and completing the ride. This doesn't factor the time a driver is waiting in between drives, which is often substantial.

The Uber and Lyft-funded ballot measure was the tech companies' response to California's Assembly Bill 5 (AB5), which went into effect on January 1, 2020. The impetus for Assembly Bill 5 was to make gig economy contract work more stable, reliable, and reduce worker exploitation. Driver-contractors, like those who work for Uber or Lyft, have never been guaranteed health care or any other benefits if they work more than 40 hours a week, as they are legally contractors rather than employees.

Since AB5 passed through California's state legislature, Uber and Lyft have refused to comply with the measure; rather, they were able to get Proposition 22 on the November ballot, and then poured nearly $200 million into the astroturf campaign for Proposition 22. Similar gig worker–reliant companies, like Doordash and Instacart, have chipped into the campaign, too.

Most concerning is that this proposition will be very difficult to amend, since it would require a seven-eighths (87.5%) vote in each chamber of the California State Legislature. Rey Fuentes, Skadden Fellow at the Partnership for Working Families, previously told Salon that if passed, Proposition 22 would "lock in" a "permanent underclass of workers."

"All the historic workplace safety protections that California has enacted to protect workers, all of those things are still vitally necessary and even more so now during COVID-19," Fuentes said. "From an abstract perspective, the idea that some of the richest companies in the world are passing a ballot initiative that would exempt their workers from basic labor protections is just, I think beyond the pale."