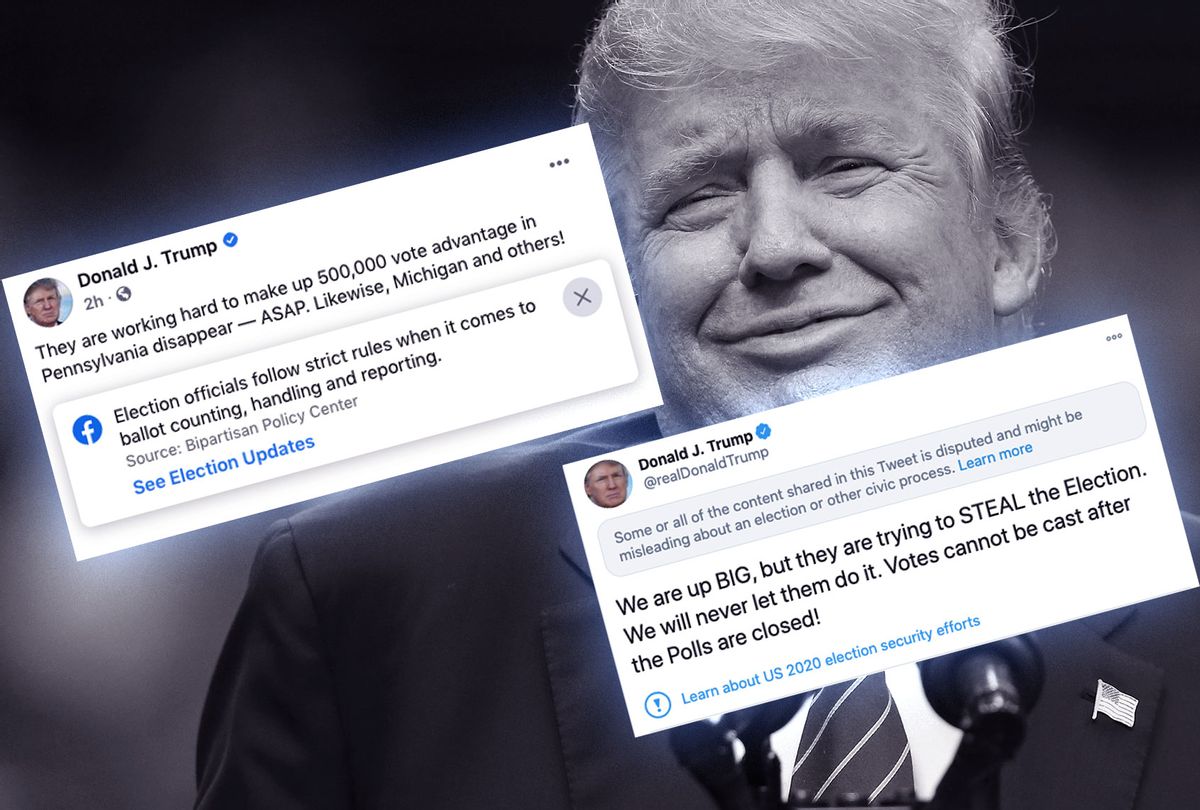 Warnings on Donald Trump's Facebook and Twitter posts, that label his words as inaccurate or disinformation (Photo illustration by Salon/Getty Images/Facebook/Twitter)
--

Twitter users were very active on Tuesday night as people anxiously waited for the the poll to close and the votes to start rolling in, but there was one person noticeably missing among the action: President Donald Trump. But his unlikely silence didn't last the night.

"As I've said all along, it's not my place or Donald Trump's place to declare who's won this election," Biden said. "That's the decision of the American people. But I'm optimistic about this outcome."

After Biden's speech, President Donald Trump took to Twitter and Facebook and began to falsely claim that the Democrats were trying to "steal" the election and he was "up big." (Trump deleted one of the tweets, then tweeted the same text again after removing a typo.)

We are up BIG, but they are trying to STEAL the Election. We will never let them do it. Votes cannot be cast after the Polls are closed!

On Facebook, the exact same message was also labeled, but with fewer sharing and commenting restrictions than Twitter.

"Once President Trump began making premature claims of victory, we started running notifications on Facebook and Instagram that votes are still being counted and a winner is not projected," Facebook's press team said on Twitter. "We're also automatically applying labels to both candidates' posts with this information."

Major social media outlets have faced extreme scrutiny over the past four years, due to their misuse as weapons to spread propaganda in the 2016 election. In particular, Trump frequently employs Twitter to sow falsehoods and even threaten his opponents, sometimes with violence. As a result, both platforms have implemented forms of fact-checking for many posts by political figures and groups with large follower counts.

Indeed, since September of this year, Twitter and Facebook adopted explicit policies on how to handle premature or false election victory claims, which they anticipated from Trump. According to Twitter' policy, premature claims of victory make the tweets eligible for removal from moderators. Facebook's policy is more tolerant of such claims; it will only label posts that include content about the election, and direct users to authoritative information.

The social media crackdown didn't stop on Tuesday night. On Wednesday morning, Trump tweeted a false claim that he was "leading, often solidly, in many key States, in almost all instances Democrat run & controlled," but then "one by one, they started to magically disappear as surprise ballot dumps were counted." Twitter and Facebook placed their labels on the message on their respective platforms, too.

Trump's tweets aren't the only ones being labeled with warnings for spreading misinformation. A reporter at the New York Times had his tweets labeled about a problem with printer ink in Wisconsin, which may have been in error.

Given their efforts and all the scrutiny over both platforms, has Twitter and Facebook's attempt to stop the spread of misinformation worked? Hardly. It appears that many of Trump's supporters found other ways to amplify his messages. A hashtag associated with the alleged Democratic theft of the election, #StopTheSteal, made the rounds on Twitter on Tuesday, largely driven by right-wing influencers. While Twitter has labeled some of the tweets that use the hashtag, many of them remain on the social media site unflagged.

The same hashtag trended baselessly during the 2018 midterm elections. Many experts and journalists fear that such false claims undermine many Americans' faith in democracy.

"The #StopTheSteal hashtag, Fox's misleading preemptive coverage, and Trump's attempt to sow confusion about the legitimacy of uncounted ballots are part of a larger assault on democracy," Parker Molloy wrote in Media Matters. "By working to create the false impression that Democrats were carrying out an illegal scheme to 'steal' the election in Pennsylvania, Trump and his allies are taking what they view as necessary steps to build public support for the Supreme Court showdown Trump craves."