Yes, Trump's Twitter threats against Democrats are a "distraction" — but we can't ignore them

Trump is desperate, and encouraging violence from his superfans. That's dangerous, and we can't look the other way 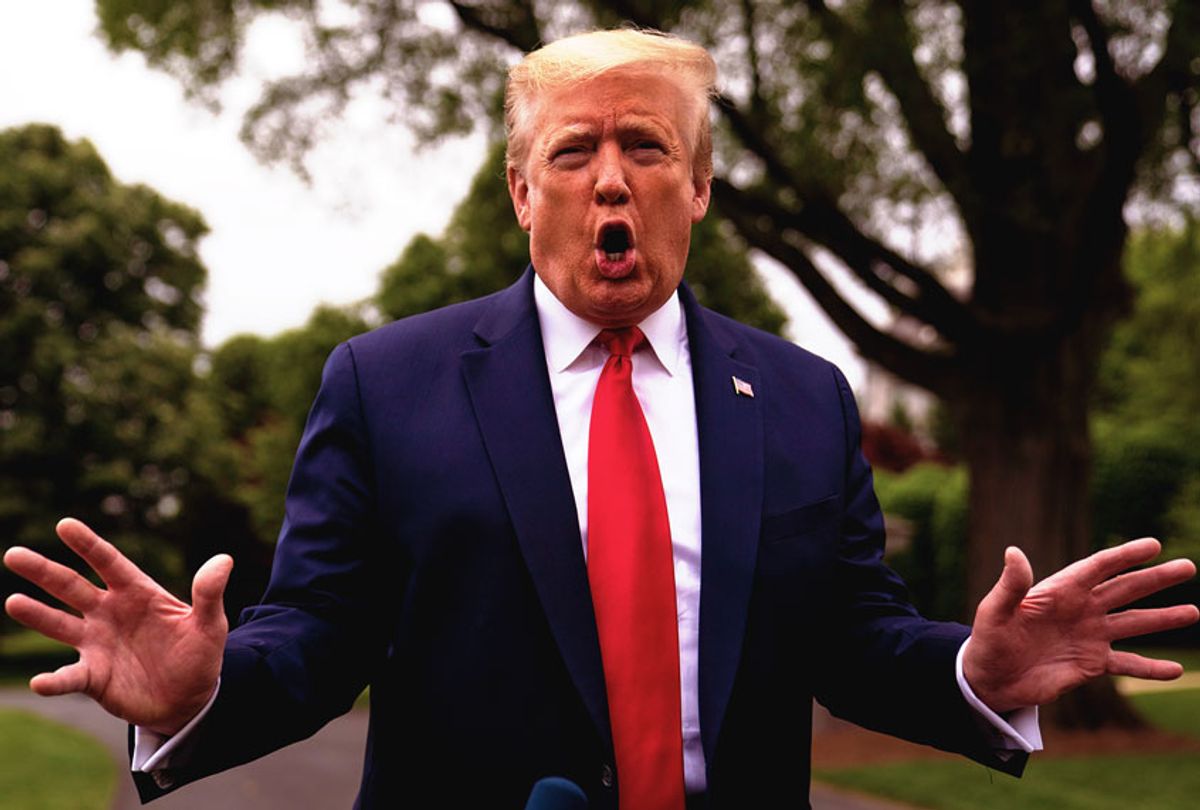 President Donald Trump talks to reporters before departing the White House for a trip to Michigan, Thursday, May 21, 2020, in Washington. (AP Photo/Evan Vucci)
--

Donald Trump, by design, is a chaos monster who shovels crap out faster than people can process it. Unencumbered by normal human qualities like empathy or conscience, Trump can bounce from one awful behavior from another — grifting, sexual assault and harassment, racism, lying, conspiracy-mongering, criminal schemes — with astonishing speed, doing more wicked deeds in a day that what most aspiring villains can accomplish in a year or even a lifetime.

In an effort to get a handle on the endless deluge of awfulness pouring out of Trump, it's become common to describe some of the godawful things he does as "distractions" from other awful things he does. It's an effort to triage our response, apparently on the theory that figuring out which Trump evils rank higher than others can somehow sharpen our efforts to process and resist them. It's an honorable desire based in empirical evidence: Indeed, Trump sometimes does or says nasty things to divert public and media attention from other nasty things he does or says. Unfortunately, this often fails to understand that the nasty stuff Trump does to distract us from other nasty stuff is incredibly dangerous on its own terms, and can't just be shrugged off as a pure or content-free distraction.

Today's case in point: Trump, who has frequently indulged in late-night binges of Twitter vitriol while most Americans are asleep, was at it again late on Wednesday night when he decided to promote a video by a cowboy cosplayer and Trump superfan named Couy Griffin declaring, "The only good Democrat is a dead Democrat."

"Thank you Cowboys. See you in New Mexico!" Trump said of the video, which echoed a 19th-century slogan — "the only good Indian is a dead Indian" — used to justify genocide against Native Americans.

So far, however, the mainstream media reaction has been a big, fat shrug. And it's easy to see why. Indeed, it's fair to argue that Trump's trolling antics of late are an attempt to distract attention from the real-world disaster unfolding in this country, largely due to his negligence. The U.S. has officially crossed mark of 100,000 dead from COVID-19. More than 40 million people who have filed for unemployment. Trump has entirely given up on even pretending to have any national strategy for fighting the virus, beyond demanding that states "reopen" ASAP to let the virus wash over us and kill untold thousands more.

"This whole thing is a distraction, and you know it," Chris Cuomo of CNN said on Wednesday night, adding that Trump stirs the pot with this hateful nonsense to distract "from the dead and the dire situation that [he's] basically ignoring."

On Thursday morning, MSNBC's Joe Scarborough, who has been fending off Trump's vile and baseless murder accusations in recent weeks, made a similar point. Trump defames him and others, Scarborough said, to distract us from the fact that he ignored or neglected the coronavirus pandemic for months. He would rather have people "talk about how vile his tweets are or how dangerous his fight with Twitter is" than about the 100,000 dead.

Neither Cuomo nor Scarborough was talking specifically about Trump tweeting out violent rhetoric toward Democrats — Cuomo's segment aired shortly bit before Trump did that — but about the mountainous garbage fire of the president's Twitter feed in general, of which this threatening rhetoric was just a small piece. Trump is absolutely throwing out whatever he can in a desperate bid to regain control of the conversation so that his massive failures aren't the focus. That's led to at least two nights where he stayed up late and sent more than 100 tweets, in hopes of coughing up something outrageous enough to seize the headlines.

So it's true that these things are blatant distractions. But it doesn't follow that the best approach is necessarily to ignore Trump's childish behavior. The fact the president of the United States is encouraging domestic terrorism against "Democrats" — not just against specific politicians, which would be bad enough, but against anyone who identifies as a Democrat — is not a small thing. On the contrary, it's incredibly dangerous.

It wasn't all that long ago, though it may seem like another epoch, when a domestic terrorist apparently set out to murder Hillary Clinton, Barack Obama and the staffers at CNN — among others — with mail bombs, because he loved Trump so much. In fact, the president's level of plausible deniability was higher then: That was before Trump had openly called for such violence. Now there's an army of angry reactionaries with guns — whom Trump has eagerly encouraged with his "LIBERATE" tweets — who hang on his every word and appear ready to escalate to open armed insurrection. It's undeniable that at least a few people, and perhaps more than that, will interpret this as a push to lash out with targeted violence in the middle of an election year. The only real question is how widespread that violence will be.

Let's not fool ourselves here. In the video Trump tweeted, Griffin pivots from his incendiary language to claim that he only wishes Democrats dead "in a political sense." This falls somewhere between legalistic ass-covering and standard-issue gaslighting, with Griffin trying to hoodwink people into ignoring what he said just moments before. He's trying to have his right-wing shitposting cake and eat it too, openly encouraging violence while also trying to evade responsibility with digressive, rambling explanations of how you can't believe he really means what he just said.

But Griffin means it, and Trump does too. As Will Sommer of The Daily Beast found when he interviewed Griffin, the guy does a piss-poor job at disguising his obvious longing for violent retribution against Democrats, who he believes have no legitimate claim to representation in politics.

"You get to pick your poison: you either go before a firing squad, or you get the end of the rope," Griffin said of Democratic governors, right after claiming he wasn't seriously proposing killing anyone. When asked whether anti-lockdown protesters were considering violence, Griffin said, "There's not an option that's not on the table."

Like Donald Trump, Griffin's an obvious coward who wants to push violent rhetoric but isn't willing to face the consequences for doing so. By pushing Griffin's speech, Trump is engaging in stochastic terrorism, in which a prominent voice puts out the suggestion of radical violence, but refuses to acknowledge any responsibility if and when someone else acts on it.

Trump is desperate and clinging to anything he can use, including threats of violence, to scare Democratic voters away from the polls in November. Since the presidential election is our last available mechanism to remove Trump and replace him with someone vaguely sane and competent, this is no small thing. In the age of the coronavirus, in fact, replacing Trump with someone competent is more important than ever. It's quite literally the only hope this country has of saving lives and saving our economy.

There's a way to call out Trump's violent trolling while also keeping the focus on the rising numbers of dead and unemployed. It's about going meta — pointing out not just the facts of Trump's behavior, but why he's doing the things he does.

That's actually what Cuomo and Scarborough did in their TV segments, ironically enough. Neither man is actually ignoring Trump's Twitter antics. They highlight that stuff while also explaining to viewers the not-so-hidden purpose of such trolling: Trying to divert attention away from the 100,000 dead and 40 million unemployed. Their segments are good examples of how to walk and chew gum at the same time. They're not taking the "ignore his antics and he'll go away" approach. Rather, they're doing what all journalists should be doing, which is closer to a both/and approach — calling out Trump's often violent and mendacious distractions while also highlighting the real toll of his leadership failures on the American people.

That's what everyone in media should be doing. Ignoring Trump won't make him go away. He is still president, unfortunately. He will always have a direct line to his followers, and now he's using that connection to deliver unsubtle hints that they should use violence to prevent Democrats from voting him out of office. He's also playing the same game with his false accusations against Scarborough, creating a permission structure for some lunatic with a gun who wants to avenge his orange godhead against the "fake news."

Sadly, men with guns who want to hurt you isn't a problem we can just ignore away.

We can focus instead not just on what Trump is doing but why he's doing it. What: Using incendiary rhetoric in hopes of inspire his followers to take violent action on his behalf. Why: Because he's becoming aware that, thanks to his massive failures as president, he probably can't keep power through nonviolent and legal means. Donald Trump's increasingly dangerous flirtation with using mob violence to subvert democracy isn't a small story. It must be covered, but covered carefully — and always by pointing toward the dark goals he hopes to accomplish with this vile behavior.