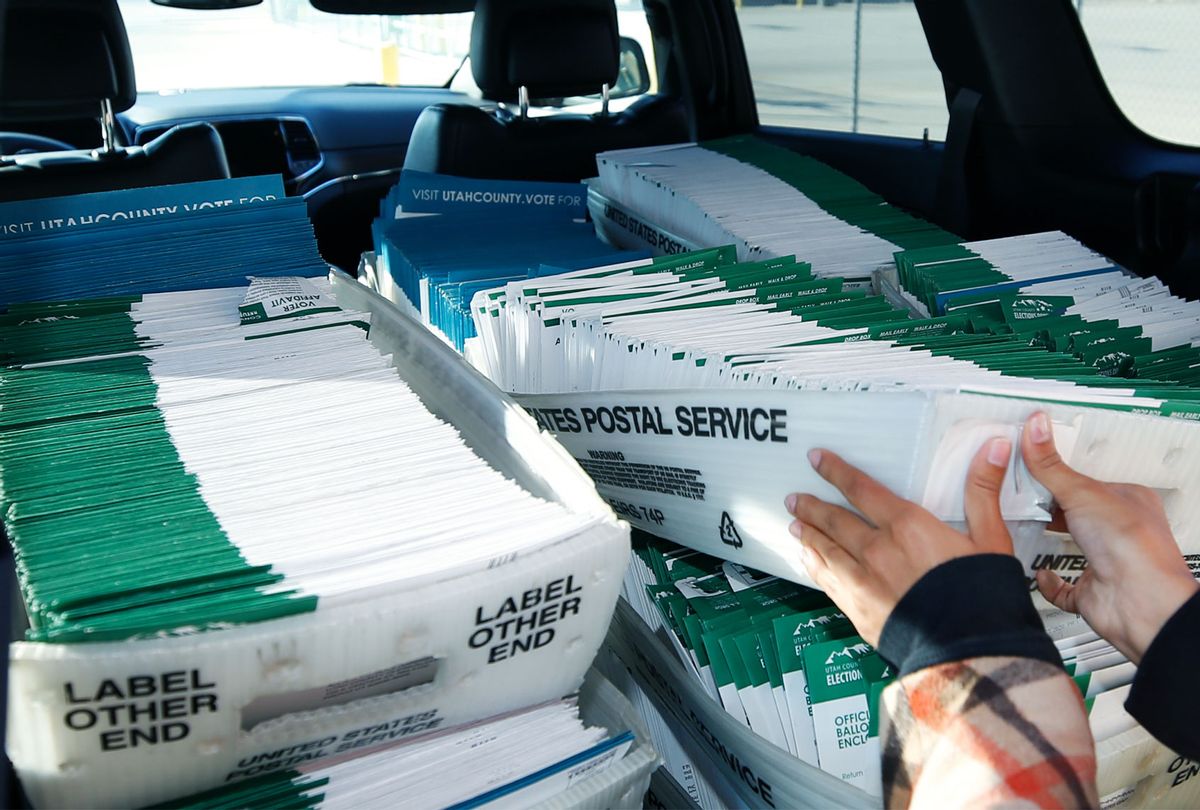 A Utah County Election worker picks up mailed ballots from the United States Postal Service office on October 26, 2020 in Provo, Utah. Utah is one of several states that has recently moved to mail-in ballots for presidential elections. (Photo by (George Frey/Getty Images)
--

The United States Postal Service (USPS) is facing criticism over a report that almost seven percent of the ballots submitted by mail were not sent to election officials on time to be processed — although the situation may not be as ominous as some fear.

The federal agency filed data in federal court on Wednesday reporting that roughly 8,000 mail-in ballots were not processed on time on Tuesday, according to The Washington Post. While this only constitutes a small fraction of the  115,630 ballots that were processed on the same day (Election Day), it could have a significant impact in states in which a thin margin separates President Donald Trump and Democratic presidential candidate Joe Biden.

Adding another layer to the controversy is the fact that Judge Emmet G. Sullivan of the U.S. District Court in the Washington, D.C. had ordered the Postal Service earlier that day to sweep 12 postal processing facilities covering 15 states after it was revealed that more than 300,000 ballots throughout the nation could not be traced. These included ballots cast in key swing states like Florida, Pennsylvania, Arizona and Nevada. The agency admitted that it disregarded Sullivan's directive and instead followed its own schedule for checking for ballots, even though voting rights advocates said that their schedule would occur too late in the day for ballots to arrive in time to be counted.

"Given the time constraints set by this court's order, and the fact that Postal Inspectors operate on a nationwide basis, defendants were unable to accelerate the daily review process to run from 12:30pm to 3:00pm without significantly disrupting preexisting activities on the day of the election, something which defendants did not understand the court to invite or require," the Postal Service wrote in a court filing, according to The Hill.

Sullivan told the Postal Service that "someone may have a price to pay" for the agency's failure to follow his directive, saying that he would have considered other options if he knew his order would be hard to implement and adding that he believes the agency's leaders are to blame, according to Politico.

Although the possibility of hundreds of thousands of missing ballots seems ominous, there could be an innocuous explanation.

"The USPS has been intentionally making its performance look worse than it is by removing ballots from the normal sorting and delivery process to deliver ballots faster," reports Aaron Gordon of Vice. "What this means is the stats might look worse than they actually are, because in some cases postal workers have, for example, been manually postmarking the ballots and then passing them off for local same-or-next-day delivery, resulting in the ballots never being scanned into the system in the first place."

He added, "Other measures, like sending ballots to the sorting facility but then removing them from the mail stream after they've been scanned and postmarked, means they are manually bypassing the rest of the process for expedited delivery and are thus scanned in and never scanned out."

Maggie Koerth, a senior science writer at FiveThirtyEight, took a different tack, writing that "to be fair to the USPS, that's a successful Election Day ballot processing rate of 93.3 percent. But given how close these races are, it's still not a good look for the already politically beleaguered agency."

One reason why so many people are suspicious of USPS is that Trump has spread misinformation about mail-in ballots being susceptible to fraud and used that to justify slashing the post office's budget, as well as implement other policies that made the post office operate more slowly. Because there are many states where ballots are not counted as legitimate votes unless they arrive by a certain time on Election Day, voting rights advocates were concerned that Trump's post office policies constituted an attempt to disenfranchise American voters, who were far more likely to vote by mail this year due to pandemic-related concerns over physical contact.

Ironically, the post office as an institution was instrumental in helping America become a thriving democracy in its formative years.

As Richard John, a professor of journalism at Columbia Journalism School and author of "Spreading the News: The American Postal System from Franklin to Morse," told Salon in August, the early post office allowed newspapers to be circulated at a low cost and helped connect a sprawling nation together through a common communications network. By 1828 it was the biggest information network in the world, with John noting that "the post office was so admired, lawmakers were calling [for] the government to take over Western Union and run it like the post office."