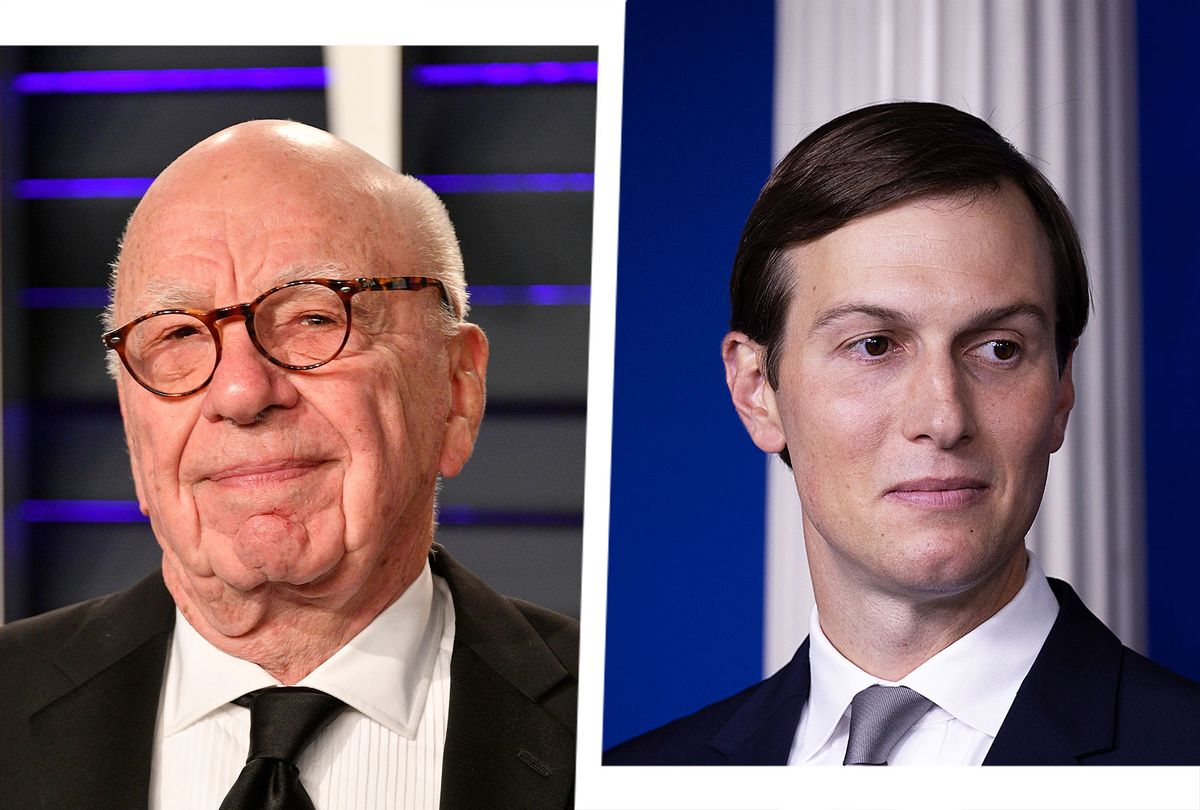 President Donald Trump's top adviser and son-in-law Jared Kushner reportedly reached out to Fox News owner Rupert Murdoch as the Trump campaign desperately pleaded for the network to retract its call in Arizona.

Kushner reached out to Murdoch as top Trump campaign adviser Jason Miller "frantically" pleaded for the network to retract its call, according to The New York Times. Kushner later made calls looking for someone whom he described as a "James Baker-like" figure who could head the campaign's effort to contest the vote count in numerous states. Baker, an attorney who served as White House chief of staff to former President Ronald Reagan, led the 2000 recount push.

The campaign instead appears to have settled on Trump's personal attorney Rudy Giuliani, who held a news conference with Eric Trump on Wednesday to push unspecified allegations of fraud. While seeking a recount in Wisconsin, the campaign has filed lawsuits contesting the vote counts in Pennsylvania, Michigan and Georgia.

Arizona, where Democratic nominee Joe Biden currently leads by about 68,000 votes with roughly 470,000 ballots left to count, has been at the heart of Republican conspiracy theories for days. Fox News was the first network to call the race for Biden on Tuesday, drawing complaints from Republicans that there were still many votes to tally, before the Associated Press also called the race.

Other news outlets have resisted calling the state. Trump supporters, some of whom were armed, descended on a vote-counting center in Phoenix to demand that officials "count the vote" — even as pro-Trump demonstrators in states like Michigan demanded that officials "stop the count." Some of the protesters also chanted "Fox News sucks" in protest of the network's call.

Some Trump supporters have also pushed a bizarre "Sharpiegate" conspiracy theory, which sought to raise questions over the validity of ballots at polling places cast using Sharpies or felt-tip pens. Their use was tested and approved by elections officials, who dismissed the complaints as "misinformation" and "unfounded."

The complaints began on Tuesday night when the network's call spoiled an otherwise optimistic mood at Trump's election watch party at the White House, according to The Times. Arizona Gov. Doug Ducey insisted to administration officials that there were still enough outstanding votes to tip the state for Trump. Senior campaign adviser Jason Miller "frantically" called the network to ask it to retract its call but failed. Kushner contacted Murdoch but was apparently unsuccessful, as well.

Instead, Arnon Mishkin, the head of Fox News' decision desk, came on the air to defend the call.

"The reality is that they're likely to only get about 44% of the outstanding votes that are there," Mishkin explained. "We're right now sitting on a race that is about Biden at 53%, Trump at 46%. I'm sorry, the president is not going to be able to take over and win enough votes to eliminate that seven-point lead that the former vice president has."

Trump, who was glued to Fox News throughout much of Tuesday night and Wednesday, also called up Republican governors to quiz them on the possibility that fraud was being committed, according to The Times.

Aides pleaded for Trump to make a public statement but failed to convince him before Biden spoke to his supporters and predicted victory. Though Trump followed that up by baselessly alleging Democrats were trying to "steal" the election and falsely declared victory, The Times noted that blame for the president's projected loss in the state likely fell on him.

Advisers like Ronna McDaniel, the chairwoman of the Republican National Committee, and former campaign manager Brad Parscale tried to convince Trump to campaign more in Arizona. The president resisted, "in part because he did not like traveling west and spending the night on the road," according to the report. Aides also failed to convince Trump to stop attacking the popular late Sen. John McCain, R-Ariz.

Instead, Trump and his campaign have alleged vote manipulation by election officials and predicted that they would win Arizona by about 30,000 votes. Armed protesters have intimidated election officials in Maricopa County, where police were forced to escort election workers to safety on Wednesday.

"They're not going to steal this election from us," Rep. Paul Gosar, R-Ariz., who attended the protest and has stoked conspiracy theories on Twitter, told the crowd.

Two county officials issued a bipartisan appeal disputing the misinformation spread by the Trump campaign and its allies.

"Everyone should want all the votes to be counted, whether they were mailed or cast in person," Clint Hickman, the Republican chair of the Maricopa County Board of Supervisors, and Steve Gallardo, the Democratic supervisor, said in a statement. "An accurate vote takes time . . . This is evidence of democracy, not fraud."