"A dangerous attack on our democracy": McConnell backs Trump's refusal to concede to Biden 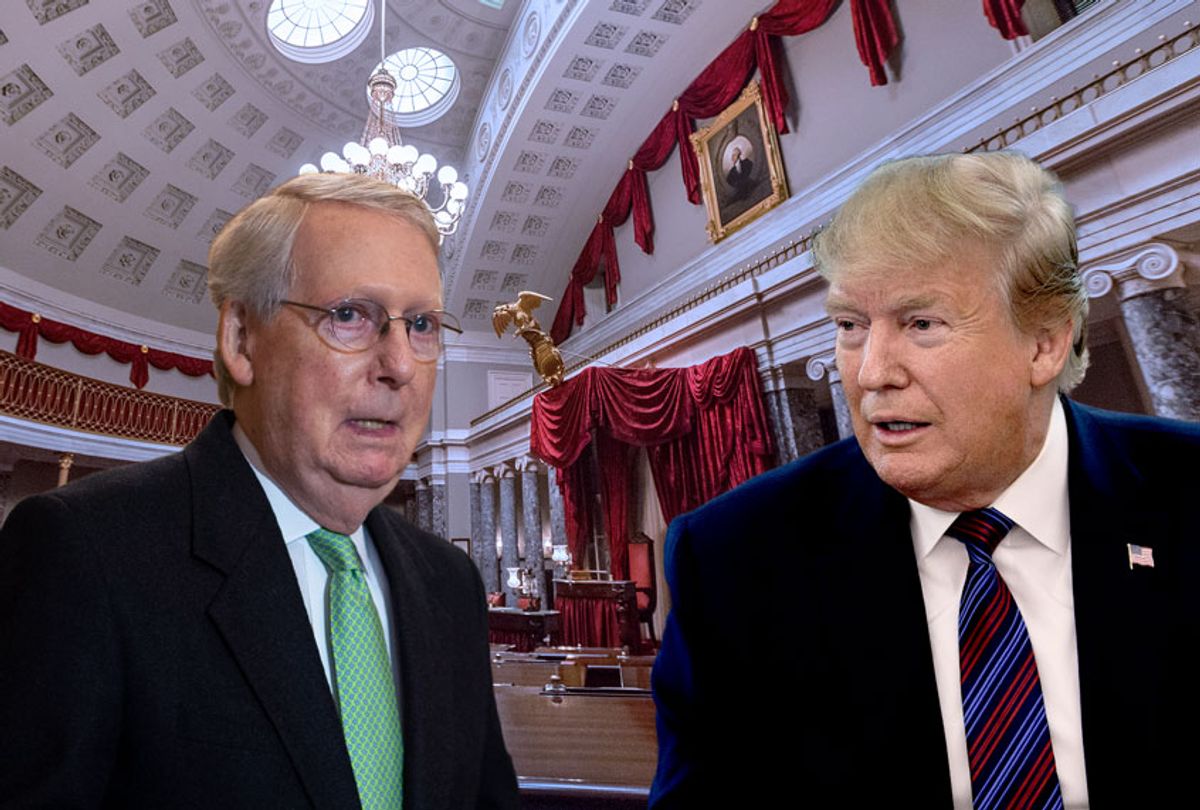 Senate Majority Leader Mitch McConnell on Monday made his first public remarks since President-elect Joe Biden was declared the winner of the 2020 presidential election, but he made no mention of the Democratic former vice president—instead claiming the election results have not been decided and that President Donald Trump is "100% within his rights" to refuse to concede.

Despite an absence of any evidence that irregularities or fraud took place during voting or ballot-counting, the president has so far refused to acknowledge that he lost the election. McConnell (R-Ky.) referred to the "preliminary results" of the election, two days after the Associated Press and other media outlets declared Biden the winner, having won at least 290 electoral votes versus Trump's 214, according to the latest counts.

While suggesting the results of congressional races—in which Republicans, who are expected to retain Senate control, also picked up House seats—were legitimate, McConnell said that Trump's legal challenges regarding the presidential race denotes that the election has not yet been decided.

"No states have yet certified their election results," McConnell said. "We have at least one or two states that are already on track for a recount and I believe the president may have legal challenges underway in at least five states... All legal ballots must be counted, any illegal ballots must not be counted. The process should be transparent or observable by all sides and the courts are here to work through concerns."

"President Trump is 100% within his rights to look into allegations of irregularities and weigh his legal options," the majority leader concluded.

Few Republicans have so far acknowledged Biden's victory. On Monday, a coalition of Republican attorneys general filed an amicus brief asking the U.S. Supreme Court to consider a ruling by the Pennsylvania Supreme Court, which allowed the counting of ballots received up to three days after Election Day.

Republican Sens. Kelly Loeffler and David Perdue of Georgia, both of whom face runoff elections on January 5, called on Monday for the resignation of their state's Republican secretary of state, Brad Raffensperger, after he stated that "there is no evidence of widespread fraud" in the election. Biden is currently leading Trump in the state's count and is expected to take Georgia's 16 electoral votes.

Without evidence, Loeffler and Perdue echoed McConnell's claim that ballots were cast "illegally" in the election.

"Every legal vote cast should be counted. Any illegal vote must not," said the senators. "And there must be transparency and uniformity in the counting process."

A massive voter turnout effort in Georgia, led by voting rights advocates including former gubernatorial candidate Stacey Abrams, resulted in more than 67% of eligible voters casting ballots this year, according to the Washington Post. Just 2% of eligible voters in the state were unregistered this year.

Journalists immediately objected to the GOP's allusions to illegal voting, with some pointing out the claims are reminiscent of Trump's repeated accusations of so-called "voter fraud" after the 2016 election.

Costa offered some insight into discussions he had over the weekend with Republican officials regarding the party's current strategy.

"Most everything McConnell does from here on isn't about January 20th," Costa tweeted, "but January 5th (the Georgia runoff elections). To win the latter, [Republicans] believe the base must be stoked, especially in a fast-changing state."