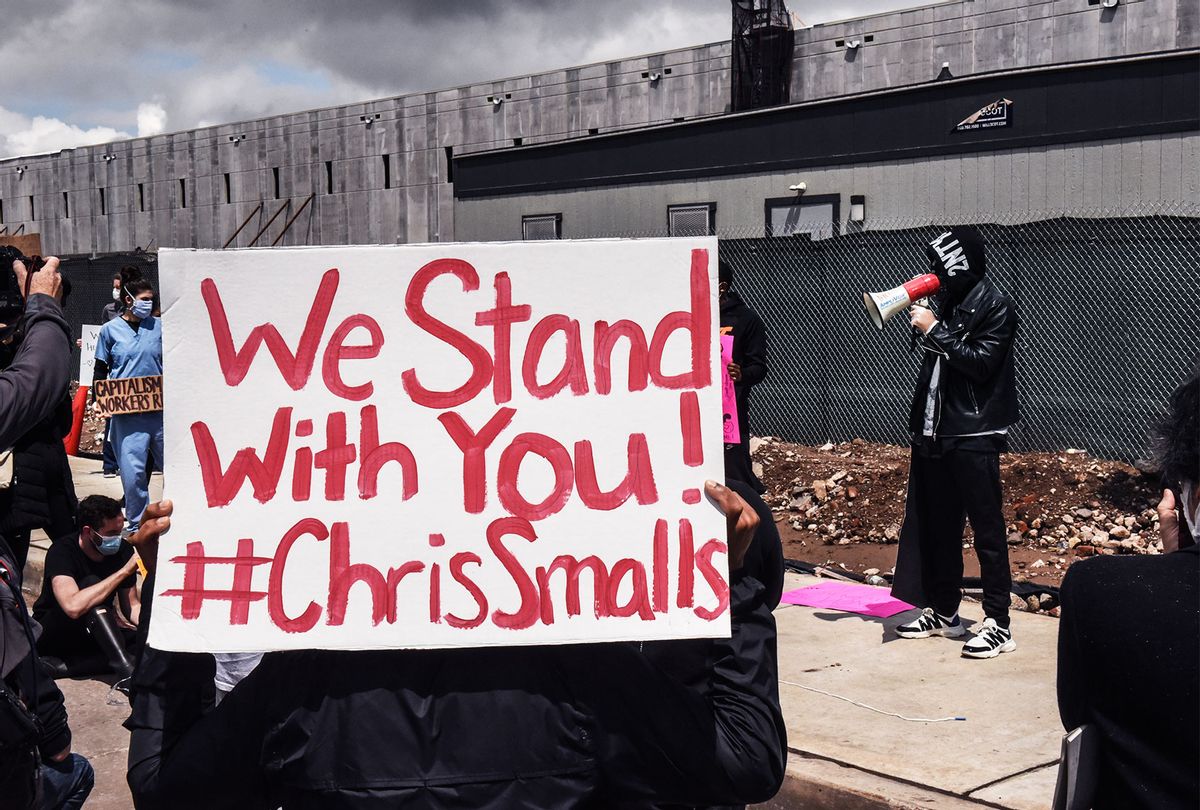 Chris Smalls, a former Amazon employee who was fired in March after staging a small walkout over conditions, speaks during a protest of working conditions outside of an Amazon warehouse fulfillment center on May 1, 2020 in the Staten Island borough of New York City. People attending the protest are concerned about Amazon's handling of the coronavirus and are demanding more safety precautions during the pandemic. (Stephanie Keith/Getty Images)
--

Chris Smalls, a former Amazon worker who made headlines for organizing a walkout over working conditions at an Amazon fulfillment center in Queens, N.Y., is suing the tech giant that fired him, Smalls believes, for organizing workers.

The class action suit filed in Brooklyn claims that Amazon violated federal and state laws due to the company's failure to provide adequate COVID-19 protections, specifically to Black and other minority workers. Smalls, who is Black and who worked for Amazon for five years prior to being terminated, filed the lawsuit on the behalf of himself and all Black and Latinx workers who are "similarly situated" to Smalls, according to the lawsuit.

"We felt that it's more beneficial to do something as a collective, obviously as we're going up against this company," Smalls told Salon in an interview on Friday. "And a lot of our workers, the Black and brown community was affected by this virus and affected by the fact that they [Amazon] didn't protect us, so taking a class action collective route was more beneficial."

The lawsuit was filed on November 12, 2020, and outlines the suspicious timeline of events that led to the suspicious firing of Smalls on March 30, 2020. Smalls is seeking unspecified damages for himself and Amazon workers.

"Within two hours of the public demonstration," that Smalls led, Amazon terminated him, according to the lawsuit. Amazon claimed that Smalls "was violating its quarantine order and thereby jeopardizing the health and safety of other employees."

US labor law stipulates that it is illegal to fire an employee for union activity, although in practice companies often make up alternative reasons for termination to avoid running afoul of the law.

The Smalls-Amazon saga started in late March when Smalls gained attention for leading the demonstration outside the Staten Island fulfillment center. When reports surfaced that he was quickly fired, a public backlash ensued to criticize Amazon. From there, Vice obtained a memo from an internal meeting between Amazon leadership that revealed a plan to allegedly smear Smalls.

"He's not smart, or articulate, and to the extent the press wants to focus on us versus him, we will be in a much stronger PR position than simply explaining for the umpteenth time how we're trying to protect workers," Amazon General Counsel David Zapolsky wrote in the leaked notes from the meeting.

In an interview with Salon, Smalls said there were many events that led up to the protest that resulted in his firing, suggesting that the protest was a final straw to get Amazon's attention and demand basic workplace protections during the pandemic. This included seeing coworkers get sick with COVID-19. Small mentioned that he had one colleague who suspected she was sick; Smalls told her to home. At the time, test results were not instant, and she went to work as she waited for her results. The lack of guidance and protocols, Smalls said, motivated him to start organizing and demand answers from Amazon before more people got sick. He says the initiative was largely supported by the fulfillment center's management.

"I was seeing people on a daily basis get sick, physically ill, flu-like symptoms, vomiting, dizziness, they couldn't finish their 10-hour shift, fatigue — all types of symptoms," Smalls said. "And there was nothing being done, we were unprotected . . . there were no masks, no PPE, no cleaning supplies, so I tried to go through the proper channels at first."

Smalls said he went to HR, a group of Amazon employees, but ultimately all of his efforts led to him being the third person at work to get quarantined. Nobody else was, peculiarly, including those who also had contact with the aforementioned infected colleague.

"I took the quarantine, but what about everybody else? So in order for me to get this message out there I had to take action, and that's when I held the protests on March 30," Smalls said.

Two hours later, he was fired.

In a statement to Salon, Amazon spokesperson Lisa Levandowski said Smalls was terminated for "putting the health and safety of others at risk and violations of his terms of his employment," even though that was precisely what he was protesting to protect.

"Mr. Smalls received multiple warnings for violating social distancing guidelines. He was also found to have had close contact with a diagnosed associate with a confirmed case of COVID-19 and was asked to remain home with pay for 14-days," Levandowski said. "Despite that instruction to stay home with pay, he came onsite further putting the teams at risk."

Unprompted, Levandowski then said that "diversity" is important to the tech giant, and issued an extraneous statement praising Amazon's work in "diversity and inclusion."

This reporter suspects it was a preemptive reaction to accusations that race was a factor in Smalls' firing, along with Amazon General Counsel David Zapolsky's leaked words about Smalls being "not smart, or articulate," a phrasing that many commentators interpreted as having racist undertones.