Big Tech is leading the new space race. Here's why that's a problem 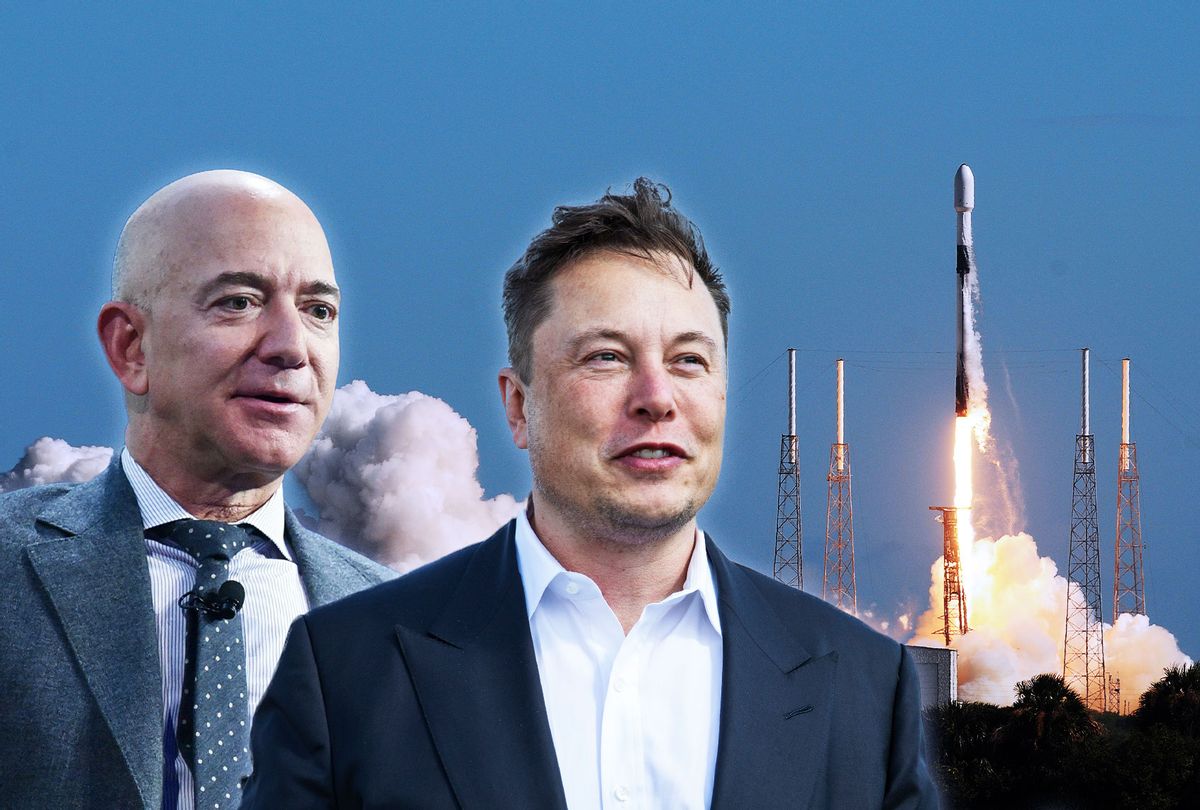 The coronavirus pandemic has made having a stable and reliable internet connection a matter of extreme urgency, as people all over the world struggle to work, access education, and participate in society while staying safe. Yet universal affordable access is far from being achieved; indeed, half of the world still lacks access to the Internet, despite sustained efforts from governments and corporations.

One popular proposal for ubiquitous connectivity comes from Low Earth Orbit (LEO) satellite constellations. LEO boosters claims that such satellites will have the ability to deliver high-speed broadband anywhere on the planet. These satellites provide internet access from space, and require placing thousands of satellites into orbit at a much closer proximity to Earth than traditional satellites.

The prospect of a globe-encircling mesh of broadband communication satellites has attracted the interest and investment of billionaires ranging from Bill Gates in the 1990s to Elon Musk and Jeff Bezos today. Currently there are at least four major LEO initiatives from the US and Europe, including Starlink (SpaceX), Project Kuiper (Amazon), OneWeb, and Telesat. China has announced at least three LEO constellations, and Russia one. The size and scope of these projects are massive. To put current LEO satellite ambitions in context: the current total number of satellites of any kind orbiting Earth is just over 2,500. Starlink, who already have nearly 900 satellites in orbit, recently petitioned the US communications regulator for permission to launch a total of 12,000 satellites. Not to be outdone, OneWeb recently applied for permission to launch 48,000 satellites.

So what's not to love?

While the goal of these companies to ensure broadband anywhere and everywhere is laudable, the technology and the approach to connectivity are not free from concerns. Recent history, especially the development of the Internet itself, has shown us that simply having the capability to build something doesn't necessarily make it a good idea. The Silicon Valley ethos of "move fast and break things," perhaps valid in developing small applications, becomes irresponsible when the consequences of failure may be catastrophic and irreversible. Criticism of LEO constellations to date have focused on practical concerns around a variety of issues, including: the economic viability of the constellations, the occlusion of the night sky from astronomers, wireless interference between different constellations, and the potential chain reaction of collisions from a single error in satellite trajectory, leaving near-space an inaccessible junkyard of debris.

Beyond that, LEO constellations have deeper and longer-term implications that have yet to find their way into mainstream public debate. For one, LEO constellations are part of a larger process in which space exploration is being redefined and reframed in military and commercial terms. Closer to Earth, LEO constellations raise important concerns around the potential for the further entrenchment of a global internet oligopoly that increases inequality and disempowers citizens.

The scramble for space

Over the past seven decades, as our ability to explore beyond our planet has evolved, national security interests in space have aligned with commercial ones to an extent that they are nearly indistinguishable today. In the United States, private space launch companies like SpaceX and United Launch Alliance are major recipients of government contracts and now provide the bulk of US launch capacity for both scientific and military missions. While close ties between the defense and aerospace industries is nothing new, we are in a decidedly new phase of this relationship due to technological advancement, new policy priorities and the rise of private actors.

As commercial launch capacity has increased and space exploration technologies have advanced, the decades-old agreements around how we treat space and recognize our solar system as a commons for the benefit of all humanity are beginning to unravel. One clear example of this is the White House's recent "Executive Order on Encouraging International Support for the Recovery and Use of Space Resources," which emphasizes that "the United States does not view outer space as a 'global commons'" and refers to the Moon Agreement as "a failed attempt at constraining free enterprise."

It is necessary to better understand the deep ties of LEO companies to the hegemonic designs of national governments on near space. Recently, in exchange for $28 million USD, Starlink provided the services of its satellites for live-fire demos with the US Air Force to test its Advanced Battle Management System and lay the groundwork for a military Internet of Things. Speaking after the latest live-fire demo, William Roper, Air Force acquisition chief, opined that "the military needs to be ready to play a strategic role because we need communications in many areas of the world that there are no commercial providers . . . we can be the stability case for companies like SpaceX and others who want to sell communications worldwide."

SpaceX's connections to the military-industrial complex were made clear in comments by SpaceX president Gwynne Shotwell in 2018, who stated that her company would be willing to launch a space weapon to protect the US, in contravention of established space norms. Only weeks ago, SpaceX signed a contract with the Pentagon to jointly develop a rocket that can deliver up to 80 tons of cargo and weaponry anywhere in the world in just one hour.

The Internet, too, from its very inception until today, has proven to be a useful tool for pursuing military and security objectives. Of these, surveillance remains at the heart of Silicon Valley's highly profitable business model of manipulating our attention and preferences for the sake of profit. This profit model facilitates the designs of space-obsessed billionaires like Jeff Bezos who make it no secret that their ultimate goal and passion is the human colonization of other planets in our solar system. In general terms, with material and economic support from taxpayers through defense spending, the profits from the colonization of our data-bodies are being invested in the militarization, privatization and colonization of space.

The telecommunications sector has always been a battleground for regulation. While the early days of the Internet seemingly teemed with competition and diversity, power and control has ultimately become concentrated with the growth of giant internet companies that now dominate our online life. The consequences of unregulated, technology-fueled expansion of globalization and inequality can now be seen in almost every aspect of life.

Digital technology plays a critical role in amplifying inequality, highlighting the need to reframe how we approach network technology development. Some governments and citizen groups understand the connection between economic mobility and tech skills development.

One great example of this comes from Broadband for the Rural North (B4RN), a cooperative in Northern England, that delivers 1 gigabit-per-second fiber-optic capacity to homes in a region deemed economically unviable by the incumbent telecommunications giant. B4RN's ability to build and sustain an affordable internet service at speeds many times that of commercial offerings is based upon the investment they make in both community engagement and the development of local capacity. Contrast this with the prospect of a broadband service from a LEO constellation, in which the role of the citizen is that of a consumer only. It is also worth noting that B4RN's profits are reinvested locally, while revenues from LEO constellations are beamed straight out of the country.

The failure to invest in alternatives that build local capacity replicates itself at the national level as well. LEO constellations have the potential to further abstract Internet service to a supra-national level in a manner that disempowers not just individuals but nation-states themselves in terms of domestic expertise and infrastructure. Investment and deployment costs for LEO constellations are so "astronomical," and in many cases so tied to national/military investment and subsidies, that only a small handful of corporations/countries will be capable of owning and managing their own constellation. This is likely to open up a new front in the ongoing wrangling by geo-political power blocs over the future of the Internet.

Furthermore, it is far from clear that LEO constellations have either the capacity or the economic model to deliver on their claims of providing affordable connectivity to the unserved in most parts of the world. Consider that the half of the world's population that remains unconnected to the Internet are the most economically disadvantaged. As such, most people will not be direct consumers of LEO services but will instead need to rely on a telco building infrastructure and using LEO as backhaul—a scenario which already exists with conventional satellite services. A further concern is that LEO constellations may ultimately create a disincentive to investment in rural connectivity, based on the assumption by service providers and governments that LEO constellations will address that gap.

It is troubling that companies like Amazon and Google (the third largest shareholder in SpaceX), which already wield tremendous power and influence over society, are vying to expand their dominance by becoming global internet service providers with support from taxpayers via subsidies and military spending. With their hands in essentially every layer of the communication stack, it will prove challenging to regulate or even know about the data they harvest and how those are used to competitive advantage in other areas of their businesses.

Recovering a spirit of cooperation

At the time of their emergence, both space exploration and the Internet served as beacons of hope and of potential transcendence for humanity—one of shared imagination and resources, and of cooperation in human development. In both cases, that hope has been dimmed in a quest for profit and geo-political power. If we want to recover a sense of shared purpose as a species, the question as to "who gets to put their satellites into low earth orbit?" is more important than we might think. Is space for everyone, or just a few huge corporations and global superpowers? This is the question we ask when we ask who gets to park their satellites in orbit.

There is an opportunity to return to the spirit of internationalism that infused the early days of space exploration in which space was held as a shared resource to be protected and guarded from exploitation. Similarly, here on Earth, we see successful efforts to manage Internet infrastructure as a commons in contrast to Silicon Valley's model of surveillance capitalism. Recognizing that individual and collective empowerment and agency are as important as the actual infrastructure itself is the key to a more egalitarian Internet. LEO satellite networks may deliver connectivity (although many doubts remain), but they are less likely to empower people and move us toward a more equitable world. The development of a healthy Internet that actually benefits humanity involves not just the end result of affordable access, but also the process through which people gain that access.

Steve Song is a Fellow with the Mozilla Foundation where he works to promote policy and regulation that will increase equitable and affordable access to communication in rural and underserved regions of the world. His blog (http://manypossibilities.net) is a popular destination for anyone interested in African telecommunications and Internet issues. Steve has been actively maintaining public maps of undersea and terrestrial fibre optic infrastructure in Africa since 2009.

Peter Bloom is a community digital defense activist and the founder and General Coordinator of Rhizomatica, an international non-profit that helps communities build their own communications infrastructure. He is a former Shuttleworth Foundation fellow and was named an Innovator under 35 by MIT Technology Review and appeared on Foreign Policy's 100 Leading Global Thinkers list in 2015. Bloom can be reached via Twitter (@rhizomatica) and www.rhizomatica.org.