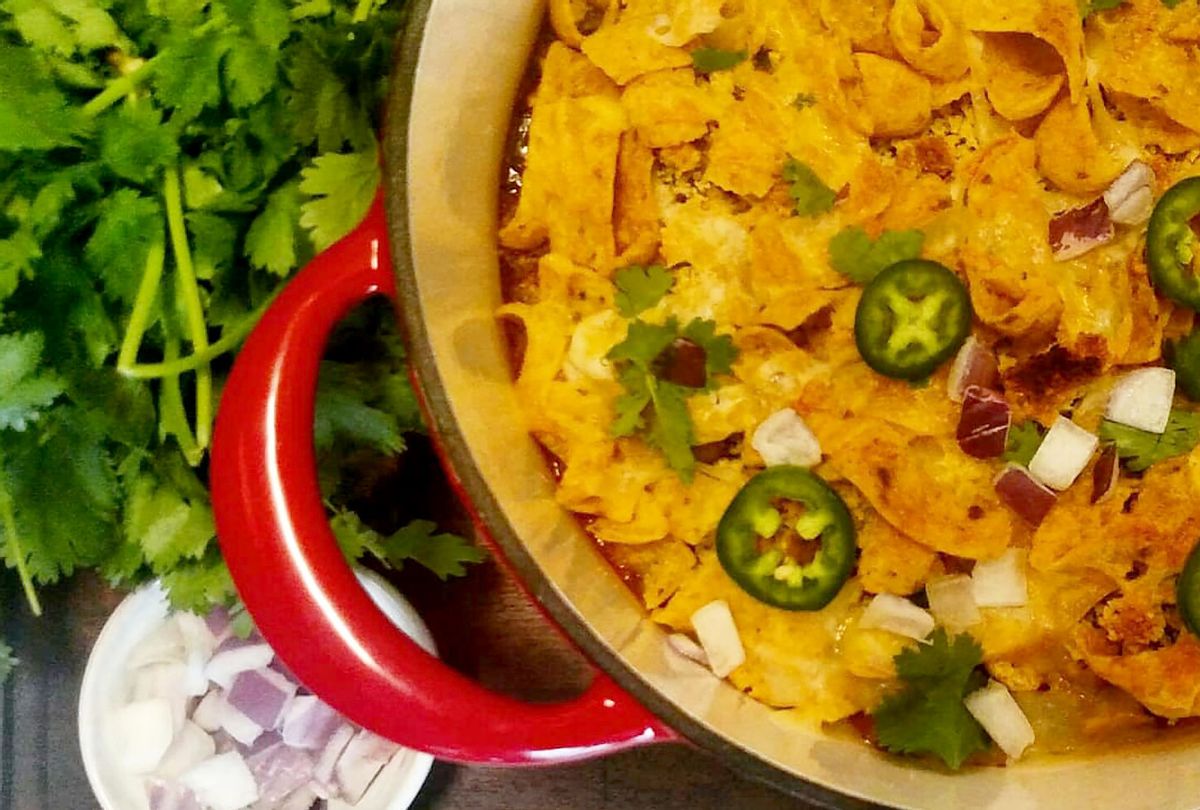 Like many dishes that have become sort of synonymous with Americana, the origin of the Frito pie — corn chips smothered in spicy beef chili and sharp cheddar cheese — is hotly contested. In Santa Fe, some residents claim that it was created by Teresa Hernandez, who sold them over an old 1960s Woolworth's department store lunch counter.

According to Frito-Lay corporate lore, the chips originated in 1932 when C.E. Doolin purchased the recipe from a Mexican cafe in San Antonio, Texas, and began to sell what he called Fritos from his Model T. Soon after, wrote Joyce Saenz Harris for the Dallas Morning News, Doolin's mother, Daisy Dean Doolin, "was inspired to pour chili over Fritos corn chips, and the rest is history."

Some believe that it was a dish that was invented in Mexico and then eventually crossed the border, pointing to Frito pie's passing resemblance to chilaquiles. Regardless of its origin, Frito pies, especially those sold out of a freshly opened bag of Fritos as a "taco in a bag," remain a popular lunch or snack item in the American Mid- and Southwest.

To me, they taste like summertime, dusky evenings at the state fair. Now that the weather is snapping cold, I wanted to create a version that had a little more heft and was hearty enough to work as dinner. In the chili, which is usually made with ground beef, there's thick chunks of stewing beef and a nuanced sweet-hot spice blend with smoked paprika, chili powder and dark brown sugar.

I augmented the Frito topping with some cubed, toasted cornbread; it's a natural fit with chili and it plays really well with the crispness of the corn chips. Top it off with some sharp cheddar cheese, diced red onions and sour cream, and it's a match made in heaven.

1. In a large dutch oven, pour 2 tablespoons of neutral oil and heat to medium. Pat the stew beef dry with a paper towel, season with salt and pepper, and then place it in the oil. Saute until browned.

2. Remove the beef from the dutch oven and set aside. Add an additional tablespoon of oil to the pot and then add the onion, garlic and jalapeno. Cook until softened, then add the chili powder, paprika, coriander, cumin, dark brown sugar and soy sauce. Stir over medium heat until the spices are fragrant, about two minutes.

3. Add the crushed tomatoes, tomato paste, kidney beans and 2 cups of beef broth to the mixture. Combine, then add the beef.

4. Bring the chili to a boil, then reduce the heat to a simmer. Cover the dutch oven with a lid and allow the chili to cook for at least two hours, or until the beef shreds with a fork and the broth has reduced by nearly half. (Check it at the one hour mark and if the broth has reduced to the point that the meat is sticking to the bottom of the pot before tender, add the reserved cup of broth).

6. When it's done, remove the chili from the heat, season with any needed salt and pepper, and set aside. To make the topping, gently toss the Fritos, toasted cornbread and cheddar cheese in a large bowl and then place it on top of the chili.

7. Place the dutch oven under the broiler until the cheese is melted and just starting to brown, five or six minutes. Remove and prepare to serve.