Trump is going out the way he came in: A loser, a liar and a cheat

As the virus heads into a winter surge, our defeated president tweets, plays golf and runs a money-raising scam 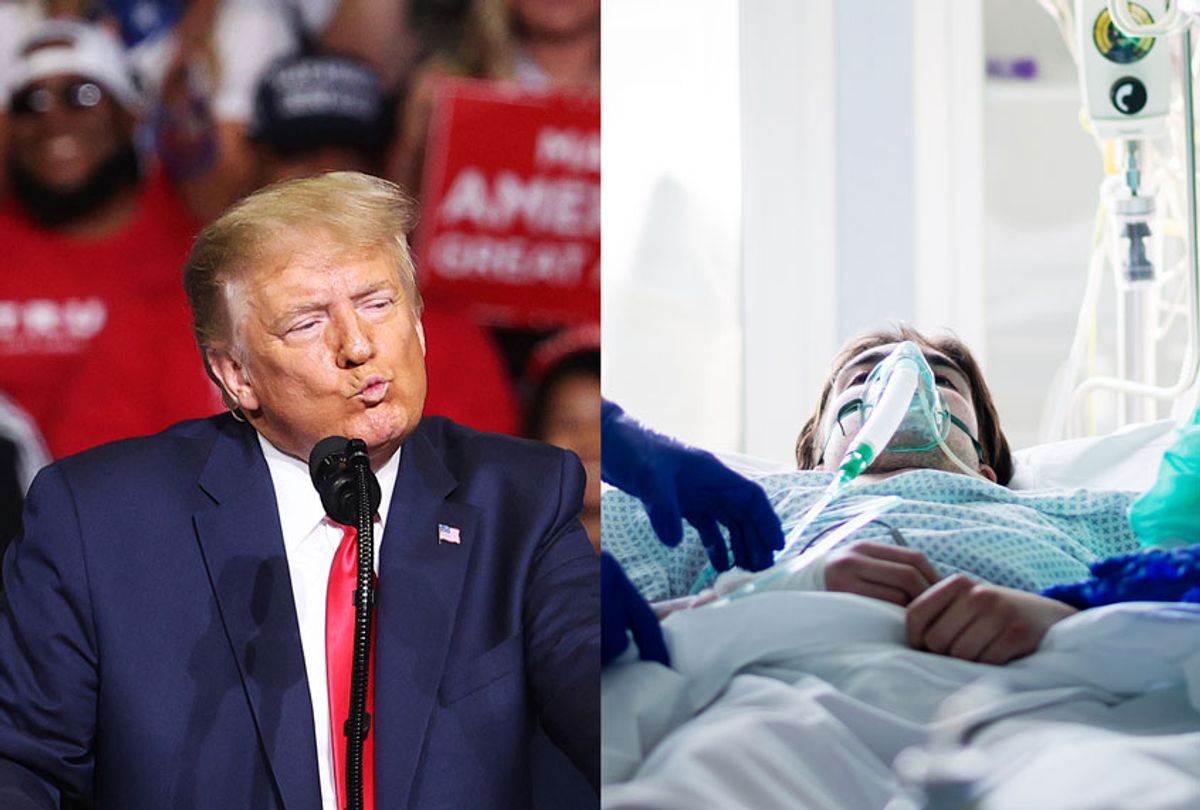 It's one of the sad truths of the human experience that you can't count tears. Maybe the first few you might be able to, but then they just flow from your eyes, running down your cheeks until you can taste them on your lips, a flood of salty sorrow and pain and helplessness.

That is where we are: beyond counting, beyond being able to measure the tragedy and loss of COVID. Statistics can't do it for us anymore. We're reduced to comparisons, a doctor quoted in the New York Times on Thursday comparing 1,000 deaths a day to "two jumbo jets dropping from the sky. If every day, two jumbo jets would drop from the sky and kill everybody, don't you think that everybody would be in a panic?" asked Dr. Carlos del Rio, an infectious disease specialist at Emory University.

Well, no, doctor. Everybody is not in a panic, especially not our president, who with just over two months left in office played golf at his Virginia course last Saturday, a day that two jumbo jets dropped out of the sky with 1,007 dead of COVID, and Sunday, a day when only one jumbo jet dropped out of the sky with 464 dead. Nearly 126,000 new cases were diagnosed on Saturday, and 103,416 more Americans came down with the disease as Trump piloted his presidential golf cart around the links the next day.

It's an astounding fact that more than a million Americans have been diagnosed with the coronavirus since Trump lost to Joe Biden on Election Day. More than 10,000 have died. And what is he doing in the White House? This week, he was busy firing the secretary of defense, Mark Esper, and installing two acolytes of the execrable Rep. Devin Nunes in important positions in our national security infrastructure.

Yes, you read that right. Trump appointed Ezra Cohen Watnick, one of the two snipe-hunters in the Trump White House who supplied Nunes with the "midnight run" secret papers he waved around during the early days of the Russia investigation in an attempt to prove that Obama's White House had "spied" on the Trump campaign. The other snipe hunter elevated by Trump this week was Michael Ellis, a former aide to Nunes and lawyer on the National Security Council who was promoted to general counsel at the National Security Agency.

There are now estimates that at the rate we're going, 400,000 Americans will be dead of COVID by the end of the year. Four hundred thousand! That is more than the population of New Orleans, and nearly the population of Minneapolis.

I know I just said that we're reaching the point where we're beyond statistics, but unfortunately, they are all we've got. Think of it. We went through months of chest-beating and outrage that 1,800 lost their lives during Katrina in New Orleans, and now we're looking at the equivalent of the entire population of that city being dead from COVID by New Year's!

Oh, yeah, I almost forgot: He wouldn't be Trump if he wasn't figuring some way to pocket some bucks for himself off his loss, and on Monday, he set up a website entitled "OFFICIAL ELECTION DEFENSE FUND," with a button screaming "CONTRIBUTE NOW!" A careful scroll through the fine print reveals that not a single dollar goes to Trump's so-called official recount defense fund until the Trump "Save America" PAC is paid $5,000, and the Republican National Committee gets $3,300. That means you would have to contribute more than $8,300 for Trump's "election defense fund" to receive any money at all. The RNC is free to use its share to aid the Republican candidates in the Georgia Senate runoff elections, for example.

Under rules that apply to regular political action committees like Save America, Trump is free to engage in all manner of self-dealing, such as appointing his children to salaried leadership positions in the PAC, or using the money to pay for fundraising events at Trump-owned venues like Mar-a-Lago, his Doral golf club or the Trump International Hotel in Washington, or to rent office space in Trump Tower. Every dollar paid by the PAC to any of those Trump-owned properties would go directly into the pocket of Donald Trump, the sole owner of all of them.

What else is Trump doing besides pushing pawns like Watnick and Ellis around his right-wing chessboard? Well, he's stewing about how he's going to get back at various Republican secretaries of state who aren't helping him fudge the numbers to make up for his defeats in states like Georgia and Arizona. And of course he's continuing to fight with senior health care officials like Dr. Stephen Hahn, the FDA administrator, and Dr. Anthony Fauci, the country's chief infectious disease expert, yelling at them because somehow they conspired with the drugmaker Pfizer to delay the announcement about the efficacy of the company's COVID vaccine until after the election, when it couldn't do anything to boost his campaign.

Meanwhile, there is still no national plan from the Trump White House to deal with the fall and winter surge in the pandemic, no national call for wearing masks, no national requirement to limit public gatherings to less than 10 (or even lower), and no national plan to distribute medical gear and personal protective equipment. This has the governors of states like Utah and Wisconsin, facing record numbers of infections and hospitalizations, struggling to supply hospitals that are overrun with COVID patients.

Forty-six of the 50 states have COVID numbers that are increasing, often exponentially. Deaths among residents of nursing homes have doubled in more than 20 states. In North Dakota, which opened up businesses like bars and theaters early in the pandemic and has resisted restrictions on social gatherings and imposing mask requirements, hospital capacity is maxed out. This week the state's Republican governor issued a rule allowing medical workers who test positive for the virus to continue working so long as they are not showing symptoms. The Strategic National Stockpile, the nation's emergency reserve for personal protective equipment and medical devices like ventilators, which Trump falsely claimed early in the pandemic had been left with "bare shelves" by the Obama administration, has only 115 million N95 masks, less than half the 300 million the administration had promised to have in time to deal with a winter resurgence of COVID. And Rear Adm. John Polowczyk, the nation's national supply commander, retired on Monday, leaving the country's medical resupply effort leaderless.

President-elect Joe Biden has appointed a new coronavirus task force, but his transition team is being prevented by the Trump White House from coordinating with the various departments of the federal government, like the CDC and the Department of Health and Human Services, that are dealing with the surge in COVID infections now rampaging through the country. Trump's petulant refusal to admit defeat and allow the legally mandated transition between his administration and Biden's is costing the lives of thousands of American citizens. It's not a temper tantrum. It's a crime.

We've got more deaths from this virus than the number of soldiers killed in World War I, World War II, Korea, Vietnam and the conflicts in Iraq and Afghanistan combined. The president of the United States we just voted out of office is sitting around watching Fox News, filing phony lawsuits, firing people he thinks are "disloyal," and running a new scam on his way out the door to line his pockets with dollars from his adoring base. Donald Trump is living up to every expectation we ever had about him. He's going out exactly the way he came in: lying, cheating and stealing.