"It’s one of the worst ways to end a campaign that you could think of," a former staffer reportedly said 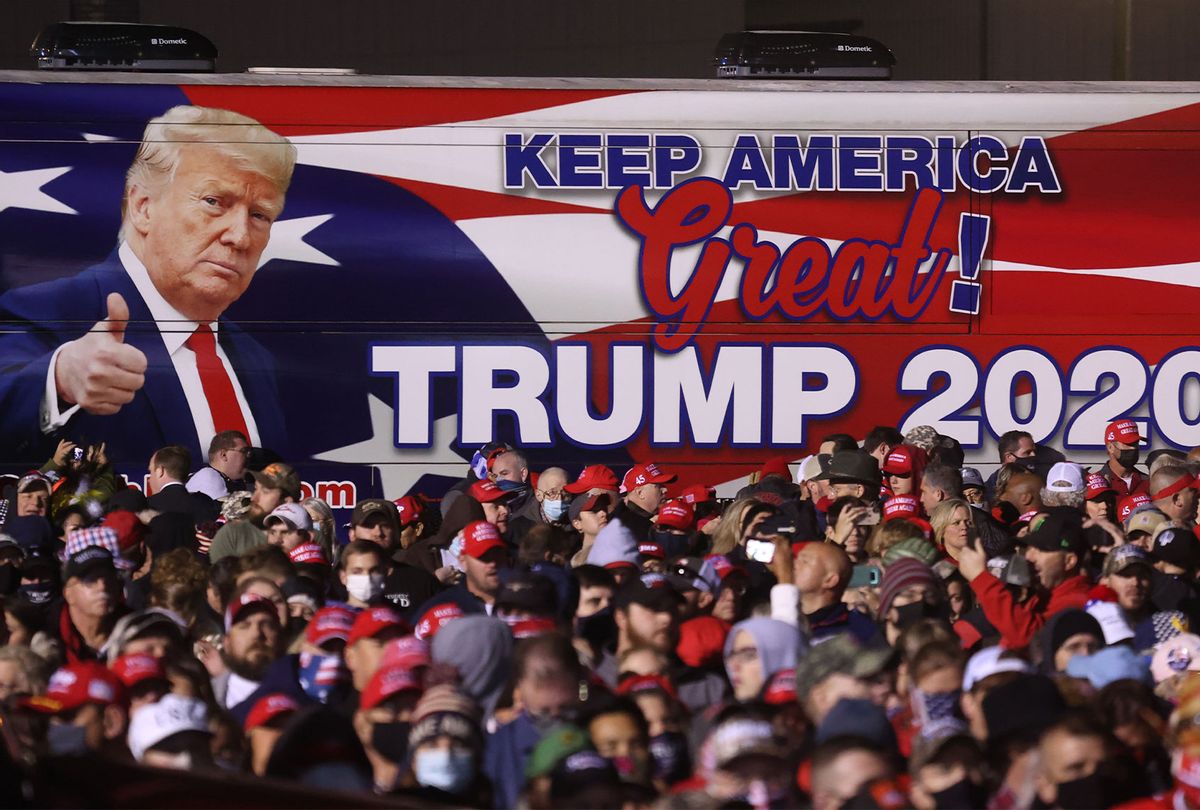 A bus with an image of U.S. President Donald Trump sits next to the crowd during a campaign rally at Richard B. Russell Airport on November 01, 2020 in Rome, Georgia. With two days to go until election day, Donald Trump is campaigning in Michigan, Iowa, North Carolina, Georgia and Florida. (Justin Sullivan/Getty Images)
--

According to a report from the Daily Beast, workers who manned the vote fraud hotlines set up by Donald Trump's campaign in the wake of his loss to former Vice President Joe Biden are lashing out at the president for the conditions they worked in and for providing them with no protections from abusive callers.

With one worker calling it the "room from hell," the Beast's Asawin Suebsaeng reports the "bare, depressing communal office space tucked away on a floor of the Team Trump headquarters in Arlington, Virginia," was shut down on Friday after days of employees being forced to sit and listen to death threats and pranksters calling to tell operators that the president lost when they weren't making bogus reports.

"When the room first opened for business, staffers worked in rotating shifts, from 7 a.m. ET to 1 a.m. the following day, a source with knowledge of the matter said. No complimentary food was regularly provided. And the phones were constantly ringing in the dreary, dull hell-space," the report states. "According to three people familiar with the situation, the hotline was inundated for nearly a week by crank callers impersonating public figures such as Hillary Clinton and Rudy Giuliani, anti-Trump callers launching into vulgarity-laden tirades, pranksters making sounds of flatulence, and others issuing threats of physical violence at the lower- and mid-level Trump 2020 staffers."

The report states that employees often took breaks to go sit in the bathroom and cry, with many leaving work at the end of the day looking visibly upset.

According to one former staffer who wished to remain anonymous, "It's misery. It's one of the worst ways to end a campaign that you could think of."

"The fiasco of Team Trump's hotline was a perfect microcosm of the ongoing flailing of the president and his senior officials' efforts to play make-believe that Trump had actually won the election," Suebsaeng wrote. "Some Team Trump staff have talked amongst themselves about filing for unemployment next week, as many contracts were set to expire on Nov. 15 and the campaign undergoes downsizing. Senior officials offered scant guidance about what was coming next, though the human resources department did tell them that many of their campaign emails would soon be shut off. And in keeping with Trump's delusion of an imminent second term, the situation froze several more senior officials from even offering themselves up as listed references to junior staff scrambling to find another job for fear that they'd get in trouble for aiding with some informal transition."

According to the report, an email did go out to the employees on Friday morning thanking them for their work, but one of the staffers told the Beast it was "too little, too late."