Reflecting American culture, CDC is now emphasizing personal benefits of mask-wearing instead of collective ones 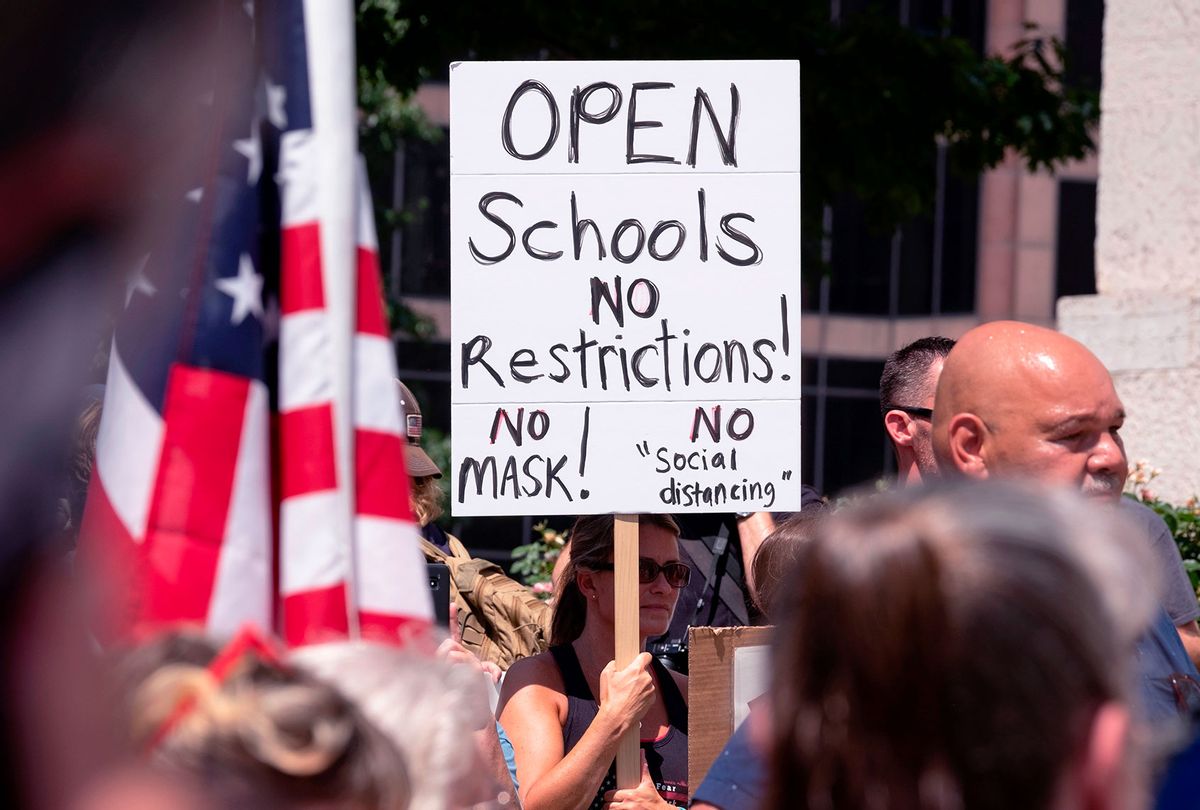 An anti-mask protestor holds up a sign in front of the Ohio Statehouse during a right-wing protest "Stand For America Against Terrorists and Tyrants" at State Capitol on July 18, 2020 in Columbus, Ohio. - Protestors descended on Columbus, Ohio for a planned anti-mask rally in response to local laws requiring people to wear a mask in many Ohio cities. (JEFF DEAN/AFP via Getty Images)
--

Last week, the Centers for Disease Control and Prevention (CDC) switched up its public health messaging. The new messaging, which can be observed in the agency's Nov. 10 scientific briefing, strongly emphasizes how wearing a mask keeps you, the individual, safe. Not others, not strangers or community members — but the wearer themselves.

"Masks also help reduce inhalation of these droplets by the wearer ('filtration for personal protection')," the CDC states. "The community benefit of masking for SARS-CoV-2 control is due to the combination of these effects; individual prevention benefit increases with increasing numbers of people using masks consistently and correctly."

In addition to touting the individual benefits, the CDC highlighted the economic benefits of wearing a mask, too.

"An economic analysis using U.S. data found that, given these effects, increasing universal masking by 15% could prevent the need for lockdowns and reduce associated losses of up to $1 trillion or about 5% of gross domestic product," the new messaging explains.

It's undisputed that mask-wearing is protective for the wearer — though perhaps even more so for others in their vicinity, should the wearer be unknowingly sick. Yet the CDC's new messaging differs drastically from the dawn of the pandemic, when the CDC first urged Americans to wear face coverings in public. Back then, the CDC's guidance focused on how donning a mask protected others from you, as you might have the coronavirus but be asymptomatic and unaware of it. Now, as Dr. Anthony Fauci, director of the National Institute of Allergy and Infectious Disease, said, the benefit of wearing masks is a "two-way street."

Nine months into the pandemic, the CDC's messaging-shift is the equivalent of a Hail Mary pass to convince a very resistant cohort of the American public to wear masks regularly, avoid large gatherings and comply with social distancing restrictions. One might interpret it as an indirect admission that America's hyper-individualistic culture is partly to blame for the deadly spread of COVID-19.

But is a messaging shift — to focus on the benefits of mask-wearing to the individual — enough to change Americans' behaviors, and thus save lives? Experts are divided.

Research shows that there's a partisan divide among who's more likely to take the pandemic seriously or not — suggesting that, beyond individualism, political affiliation plays a strong role. A Pew Research survey in August showed that 76 percent of Republicans and GOP-leaners wore masks in stores, compared to 92 percent of Democrats and those who lean toward the Democratic Party did. As the New York Times columnist and economist Paul Krugman explained, Republicans and the far-right have become so selfish about their "freedom" that any restrictions have become a threat.

"The modern U.S. right is committed to the proposition that greed is good, that we're all better off when individuals engage in the untrammeled pursuit of self-interest," Krugman wrote. "In their vision, unrestricted profit maximization by businesses and unregulated consumer choice is the recipe for a good society."

Mid-pandemic, this mindset is epitomized by Republican Congresswoman-elect Marjorie Taylor Greene of Georgia, who has repeatedly condemned wearing masks and described other mitigation strategies like "forced social distancing" as a violation of "Americans [sic] guaranteed freedom of life, liberty, and pursuit of happiness." Greene, who is a Qanon conspiracy theorist, referred to the pandemic restrictions as "draconian."

Beyond politicians, the individualist attitude is observed in everyday Americans, too. A 21-year-old in South Dakota told AP News that she and her friends were "kind of over this whole COVID thing." "I won't wear a mask unless I absolutely have to," she said. "A am a very strong Christian and I know where I'm going, and I believe God will take me when I'm supposed to go. So if I get COVID and I die from COVID, it's not my decision."

American culture has long been resistant to the notion that one's actions might have consequences for others. We see this most clearly in the examples of people dying indirectly from super-spreader weddings that they didn't attend. A 55-person wedding reception in rural Maine led to 177 cases of COVID-19, including seven deaths. A recent wedding in Grant County, Washington has similarly turned into a super-spreader event.

Dr. Cindy Prins, as epidemiologist at the University of Florida, told me that COVID-19 is a "behavioral disease" in many ways. Those who work from home, wear a mask outside and physically distance themselves from other people, Prins said, "have a much lower risk of getting COVID-19." As the CDC noted in its new scientific briefing, an additional 15 percent of population compliance with mask-wearing could mean the difference between another lockdown and no lockdown.

Americans have a strange relationship with the idea of selfishness. It's an insult to be called selfish. Nobody wants to be called selfish, yet we see our society rewarding selfishness all the time. To survive in late-stage capitalism, you need to be financially and economically successful. And since we live in a dog-eat-dog world, people will do whatever it takes to survive. Strangely, research in the past has shown that humans are altruistic by nature — they innately care for others, and thus choosing to be selfish actually takes more effort. However, when it comes to Americans, one study published in Psychological Science found that we are less motivated to do something if it doesn't benefit us directly.

Prins said it's not so much selfishness that she believes is the problem in containing the pandemic, but instead the overall "mixed messaging" citizens have received.

"We started out saying  'don't wear a mask, you only need to wear it when you're sick,' then we changed gears and said 'masks are good,' but we weren't seeing widespread mandates," Prins said. "I think that those early, confusing messages made an impression on some people, and it's really hard once you get some of that information out to change people's minds."

She added that the fact it's become a political issue instead of a scientific one has made matters worse.

Daniel P. Aldrich, Professor and Director of the Security and Resilience Studies Program at Northeastern University, told me he believes selfishness is part of the problem, but not worthy of all of the blame.

"Many people would say that the whole society of capitalism runs on us each out there trying to make a bunch — and it works for some of us but not all of us," Aldrich said. "But I think the behavioral choices that we make, the information that we get, and the trust we have in the information — that is what drives me to put on the mask, to make the mask for my neighbors, or to go do the opposite, right?"

Aldrich, whose recent research highlights how regular participation in civil society and having trust in government officials affects the likelihood of a community adopting new health behaviors in the U.S., said a person's community matters most when it comes to an individual following pandemic restrictions. For example, if there aren't any anti-lockdown rallies in your community, you're not going to join one.

So, does this mean that the CDC's shift in messaging will work? Probably not, both Aldrich and Prins told me.

"Behaviorally, I'm not sure that that's going to change what some people do," Prins said.

"Much of our behavior is a function of our network," Aldrich said. "Their networks don't take the information seriously, and what we need to do is find influencers in the networks; if President Trump had said, 'I had COVID-19, but I'm still wearing a mask just to keep you safe,' that is a way of reinforcing behaviors in a network."

Whether it's selfishness or toxic masculinity that keeps Republicans leaders from following and promoting mask-wearing, one thing remains clear: it's a small percentage of people ruining life for everyone. And until we can all get on the same page, which would require looking out for one another, this pandemic will continue to rage on.