A new #Resistance hero emerges amid the Trump endgame: The dutiful civil servant

We hadn't heard of Brad Raffensperger or Chris Krebs a week ago. Now they're heroes standing tall for democracy 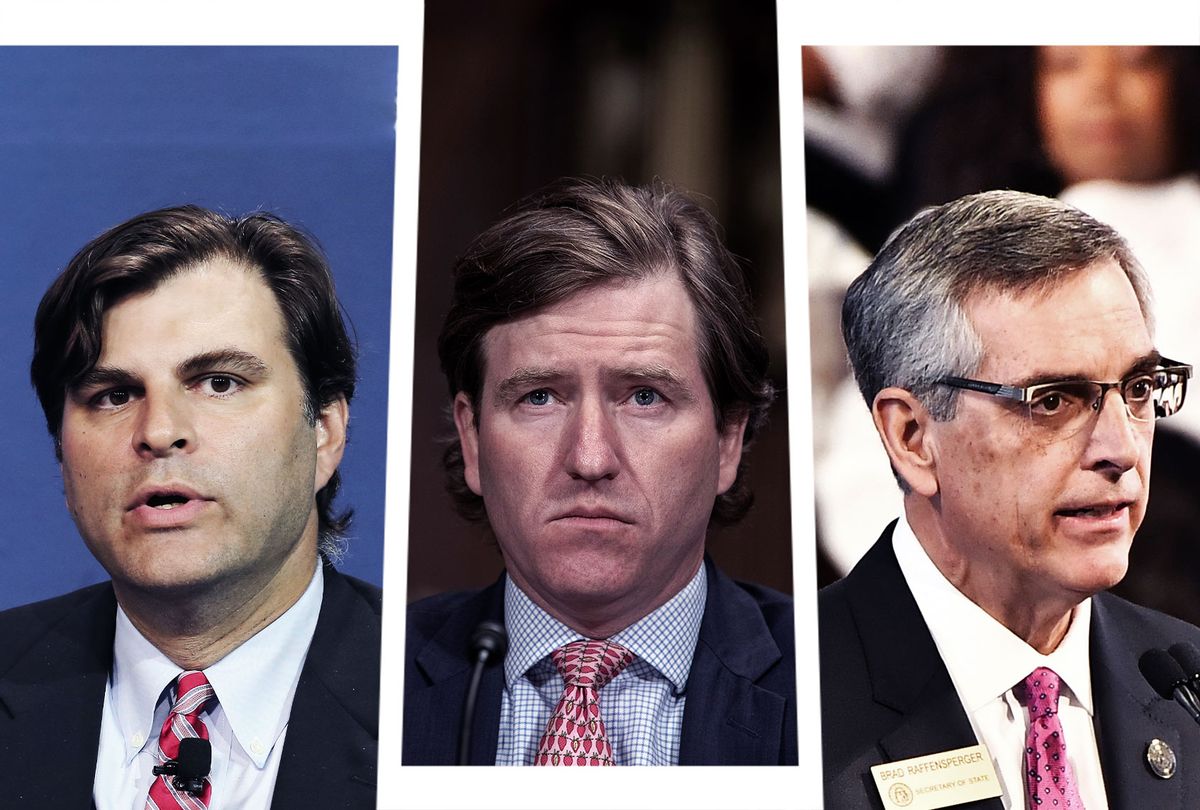 Donald Trump keeps spiking the ball in celebration of some supposed avenue to overturning the election result, only to be reminded that the game ended two weeks ago — and he lost.

Late on Tuesday evening, the president tweeted: "Wow! Michigan just refused to certify the election results! Having courage is a beautiful thing. The USA stands proud!" Trump was responding to an effort by the two Republican members of the Wayne County Board of Canvassers not to certify the election results in Detroit, home to a majority Black population, while allowing votes from majority-white suburbs to be certified. The two Republicans forced a deadlock on the four-person panel, blocking the county-level certification of election results in the area for the first time in more than 100 years. By the time Trump sent his celebratory tweet, however, public pressure had already caused the pair to backtrack.

"The Trump stain, the stain of racism that you, William Hartmann and Monica Palmer, have just covered yourself in, is going to follow you throughout history," said Ned Staebler, CEO of Detroit business incubator TechTown.

Staebler was one of several dozen people who called out the Republican commissioners during a Zoom meeting initially scheduled for 100 people, but which quickly filled up with 300 attendees. While Staebler's speech went viral, the entire meeting is worth watching, not only to see citizens speak up for their community in the face of such blatant attempts at disenfranchisement, but because of the many first-hand accounts about Republican election observers in Michigan essentially spending the entire time trying to disrupt the election process and harass poll workers.

Curiously, there was no confirmation of anecdotes spread by the Trump campaign that Republican votes were altered. Hartmann and Palmer reversed their votes and certified the election results before the meeting was adjourned after three hours. Even the Republican Senate majority leader in Michigan, who has launched an investigation into the election, has already sworn off any suggestion that the state award its 16 electors to Trump, who lost the state to Joe Biden by more than 146,000 votes.

The Michigan episode exposes how loyal some Trump supporters are when faced with even the slightest bit of scrutiny. To be sure, it's beyond dismaying to watch one of only two major political parties in the nation use any means necessary to sow doubt about the integrity of our democracy. And while there's no question our political situation has radically shifted for the worse, it's also worth noting that, as damaging as the Trump era has been, the last two weeks have reintroduced the nation to a species many believed to have long gone extinct: Republicans in elected office, and even in the Trump administration, who act with integrity.

Things would be undoubtedly worse right now if not for a handful of honest Republican election officials and dutiful civil servants. While the Trump campaign has relentlessly attempted to weaponize the government in a bid to stop Biden from receiving 270 certified Electoral College votes, a Republican like Georgia Secretary of State Brad Raffensperger stands as a lonely voice of integrity among elected leaders in the GOP.

Raffensperger is being attacked by his own party for the sin of running a clean election. Georgia's two Republican U.S. senators, Kelly Loeffler and David Perdue, who both facing Jan. 5 runoffs against Democratic challengers, have demanded his resignation. Both Raffensperger and his wife have received death threats. Even after all of that, Raffensperger went public after Sen. Lindsey Graham of South Carolina, a close Trump ally, pressured him to exclude legally cast absentee ballots in the middle of Georgia's recount.

What Graham did would be a felony in Georgia, and likely also a felony under federal law, since it was done through an interstate communication. Yet Graham took to Twitter to laugh about his attempted election interference, admitting that he had also contacted officials in Arizona and Nevada. Arizona's secretary of state, Katie Hobbs, blamed the violent threats she and her family have received on Trump and his allies in the Republican Party.

The Trump campaign is attempting to throw out ballots cast in at least six states, often in the most populous counties where voters of color comprise the majority. It's a transparent attempt to smear any votes not cast by rural and suburban voters as suspicious. Of course, if the Trump campaign were serious they'd also be seeking recounts in heavily red counties to scrounge up more votes. That suggests this entire charade isn't intended to change the outcome of the election; it is intended to sow fear, uncertainty and doubt about the integrity of our democracy — and to generate "legal defense fund" donations to line the pockets of the man identified in previous legal cases as "Individual-1."

Trump has sought to undermine public confidence in the electoral process since 2012, when he baselessly alleged that voting machines changed votes for Mitt Romney to Barack Obama — a claim he resurfaced on Wednesday. The day before, he unceremoniously fired the director of the Cybersecurity and Infrastructure Security Agency at the Department of Homeland Security via tweet.

That was Chris Krebs, a highly regarded tech expert who had received bipartisan praise for his work in making sure the 2020 election was secure. His "Rumor Control" website meticulously tracked false claims undermining the elections and corrected them, no matter the source. Hours before he was fired, Krebs spread this message on Twitter: "Please don't retweet wild and baseless claims about voting machines, even if they're made by the president." Don't expect the usual suspects who decry "cancel culture" to utter a peep, even as Trump's flunkies spread lies about Krebs' job performance.

For every loyalist Trump has installed in the government — like GSA administrator Emily Miller, whose refusal to allow for the formal Biden transition to commence ma cause delays in the next administration's COVID response plan, or Trey Trainor, the Federal Elections Commission chairman who floats baseless election conspiracy theories contrived by a Trump lawyer who thinks the Federal Reserve is deliberately sabotaging the economy to enrich George Soros — there are noble public servants like Krebs, willing to sacrifice their positions to speak truth to power.

To sustain a functioning democracy, however, it takes more than a few voices of courage to fend off creeping authoritarianism. Election after election, the most marginalized have shown up to vote for Democrats, who think it suffices to say, "History will be ashamed of you!" seemingly forgetting that history is written by the victors. Democrats gave George W. Bush and his administration a pass and now the GOP is happy to broil the surplus population even as they've wrested control of the judicial branch for the next 30 or 40 years. Republicans need to be held accountable for their bad behavior, or they will go even further the next time. It would be a grave mistake for Joe Biden to discourage investigations into Trump and his people in the interests of "unity." There must be real consequence for open racism and attempted disenfranchisement, if Democrats hope to hold onto the voters who delivered victories for Biden in so many crucial states.