A third COVID vaccine candidate, this one from Oxford University, clears a crucial hurdle 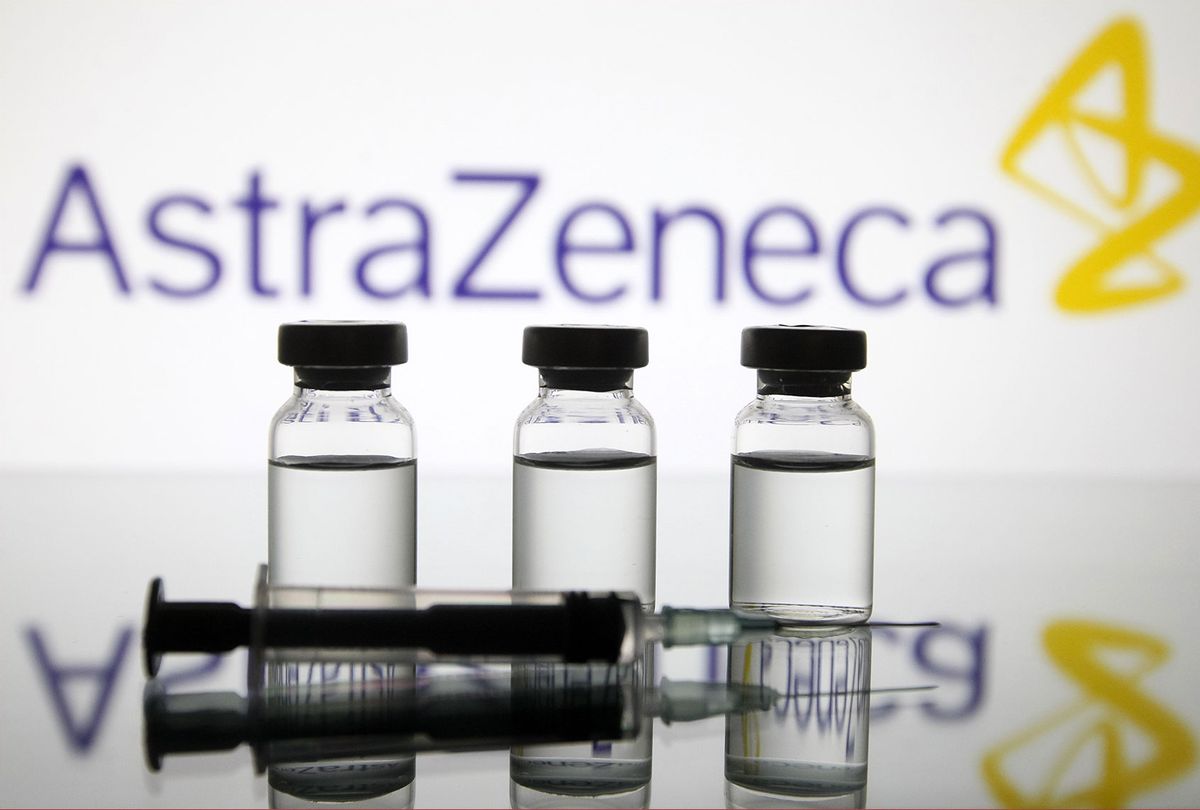 A medical syringe and vials in front of the AstraZeneca British biopharmaceutical company logo are seen in this creative photo taken on 18 November 2020. (STR/NurPhoto via Getty Images)
--

Oxford University and AstraZeneca announced on Thursday that their vaccine candidate produces a strong immune response in elderly patients and is safe, according to preliminary findings published in a prominent medical journal.

In an article posted in The Lancet, researchers at the university and pharmaceutical company said that their vaccine had been tested on 560 participants; 240 of them were above the age of 70. The vaccine is in Phase II/III of production, meaning the phase that a vaccine candidate enters after it has been found safe and potentially effective among a smaller group of participants and can be expanded to a comparatively larger group. Labelled as "ChAdOx1 nCoV-19," the vaccine candidate is an "adenovirus-vectored vaccine," meaning that it consists of engineered viruses that transport a virus' gene (in this case from SARS-Cov-2, the virus which causes the COVID-19 disease) into our bodies. The goal of adenovirus-vectored vaccines is to convince the body that it has been infected so that it will be able to successfully fight real viruses if they enter the body. In the case of this potential vaccine, it would trick the body into making coronavirus spike proteins that will help it fight the virus.

Adenovirus-vectored vaccines are not without controversy. Indeed, the only adenovirus-vectored vaccine that is commercially used today is a rabies vaccine for wild animals. The Centers for Disease Control and Prevention also allows adenovirus vaccines for certain military personnel, but no version has been approved for the general public. The human body can become immune to the adenoviral vectors used in the vaccine, which makes booster shots more difficult. In addition, the vaccines may not work for people who have already been naturally exposed to the viruses in question.

As Axios reported, the next step for the vaccine candidate is to enter Phase III trials, in which the initial clinical group is expanded even further to a larger and more diverse group of participants. If the vaccine is established to be both safe and successful at fighting the virus at that point, it can then be considered for mass production and distribution.

"The robust antibody and T-cell responses seen in older people in our study are encouraging," Oxford University's Dr. Maheshi Ramasamy, a co-author of The Lancet study, told CBS News. "We hope that this means our vaccine will help to protect some of the most vulnerable people in society, but further research will be needed before we can be sure."

The news from the Oxford/AstraZeneca vaccine trials was not always promising. During Phase III trials of a different vaccine in September, a patient in the United Kingdom experienced a suspected adverse reaction serious enough to prompt the company to put a hold on its study. As Dr. Anthony Fauci, the director of the National Institute of Allergy and Infectious Diseases (NIAID), told CBS News at the time, "This particular candidate from the AstraZeneca company had a serious adverse event, which means you put the rest of the enrollment of individual volunteers on hold until you can work out precisely what went on."

He added, "It's really one of the safety valves that you have on clinical trials such as this, so it's unfortunate that it happened. Hopefully, they'll work it out and be able to proceed along with the remainder of the trial but you don't know. They need to investigate it further."

This is not the first hopeful news on the vaccine front to come this week. Both Pfizer and Moderna announced this week that they had progressed in developing their vaccine candidates, with Moderna saying there had been "94.5% vaccine efficacy" with its drug and Pfizer (which is working with the German company BioNTech SE) reporting similar results. Unlike the Oxford/AstraZeneca candidate, the Pfizer and Moderna candidates are in Phase III of their trials. In addition, rather than being adenovirus-vectored vaccines, they're both mRNA (synthetic messenger RNA) vaccines. mRNA vaccines are a novel biotechnology which use a synthetic version of mRNA, or the part of a living creature's DNA that tells cells which proteins to make so that they can remain healthy, to produce the proteins already found in a virus so that the body can more effectively combat it.