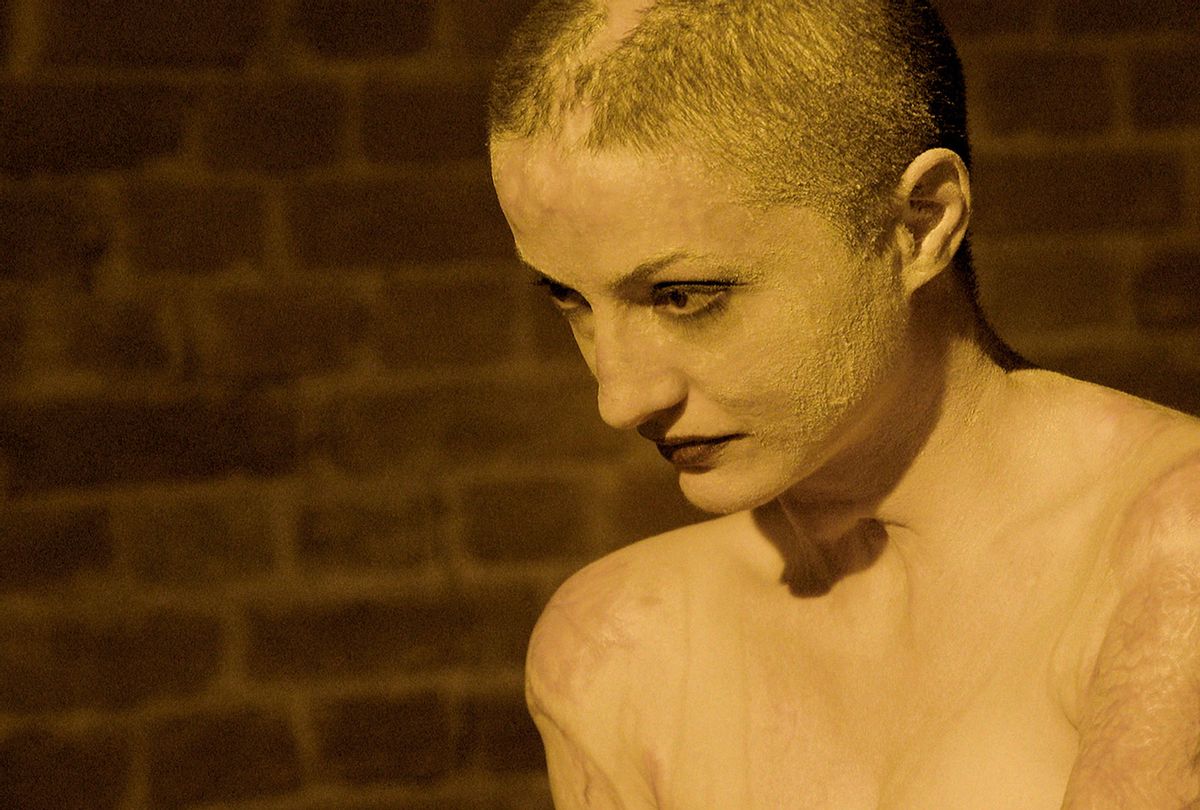 Alexander Nanau's extraordinary documentary "Collective" unfolds in the aftermath of a 2015 tragedy in the Bucharest nightclub Colectiv that gives this film its title. While 27 people died in the fire, more than 100 were injured and sent to area hospitals. However, an additional 37 of the 100-plus victims died as a result of bacterial infections while hospitalized. One father, seen in the film, explains that "a communication error" — the hospital refused transfers for patients — prevented his late son from being transferred to receive care that would likely have saved his life.

The outrage of this situation prompted protests, with people taking to the streets in response to corruption and the Social Democrats in power. However, it was the dogged efforts by heroic journalist Catalin Tolontan, from "Sports Gazette" that exposed the reality of what was happening. Tolontan and his team uncovered evidence that the disinfectant being used by Romanian hospitals was diluted to a tenth of its strength. The acting Minister of Health, Nicolae Banicioiu soon resigned. He was replaced by Vlad Voiculescu who pledges transparency. What comes to light is profound corruption that involves offshore fraud, doctor bribes, and accreditation scandals, as well as political pressures. Another situation, involving transplants being done cheaper outside the country also comes to plague Voiculescu.

Nanau captures all of this in an urgent, cogent manner. He follows Tolontan meeting with sources and attending press conferences, as well as scenes featuring Tedy Ursuleanu, one of the club's burn victims as she reclaims her life after considerable physical injury. But Voiculescu comes across best, as a man put in a complicated, possibly untenable position, hoping to right a sinking ship.

The filmmaker chatted via Zoom with Salon about "Collective" — Romania's Oscar submission for Best International Feature Film —  which speaks truth to power.

How did you gain the access you did to tell this story? Catalin Tolontan and Vlad Voiculescu must be very dedicated to transparency?

We had our doubts that Catalin and his team would let us follow them, but we did research and saw they were great characters because they were the only ones who investigated and uncovered manipulation and the lies of the authorities. We contacted them, and met them, and Catalin and Mirela [Neag, his colleague] said, "There is no way. The newsroom has to be a protected room, we have information to protect and colleagues that don't want to be filmed and we have whistleblowers that need to be protected. So, it is impossible to do an observational film on us or with us as characters."

But after a while, he called me and said, "Let's try it." He saw we had our own investigative team that was developing the film, and our own sources from inside the system. They understood the way we were working was very professional. He told me later, after we released the film, that the younger generation doesn't get information from newspapers anymore. If someone who has access to these people can put how journalism works in a film, maybe it can help and show the way journalists work. He gave us access. After we started filming, things went so fast it was a rollercoaster of revelations and corruptions.

With Vlad Voiculescu, the Minister of Health, it was the fact that he was not a politician that helped. He didn't owe anything to anyone in the system. He was 32-33 at that time, and one of his goals was transparency. There is no reason for the Minister of Health to have secrets in front of citizens. They have all the right in the world to know the decisions are taken and the criteria for decisions made in favor or against their health. We were lucky he was a young, open-minded person.

Can you talk about your observational approach to telling the story?

That's how I develop my filmmaking style up to now. I believe in this observational approach because nothing else can deliver authenticity. If you gain the trust of people, you are able to observe how they make decisions, and their attitudes are in certain situations in their lives. I make these films because I want to learn from other people and evolve and develop my own personality by learning and observing other people and understanding what it takes to stay yourself.

The film is a follow-the-money story in that greed and blatant disregard for citizens' wellbeing prompted such widespread corruption. It extends not just to Hexi Pharma, which supplied the diluted disinfectant, or to the hospital management that needed reform, but to other areas of the government and even suggestions of mafia involvement. What are observations about the pyramid of greed?

There are different layers to it. Corruption is not new in Romanian health care system even at the level of doctors. When you enter a public hospital, you sometimes have to bribe the guard to let you in. It's expected. Then the assistant, the doctor, and the surgeon are all expecting something. It's a system built around bribes, coming out of the Communist system. Then it was realizing that people in power positions were lying in an organized manner to the people they were treating. It was to keep the money and spend it here and not on other burn units outside Romania. That was a shock, and the fact that someone can dilute disinfectants over such a long period of time. Politicians are watching. Hospital managers are watching and buying it. The lack of humanity — once humanity is gone completely there [are] no borders for corruption. You can see it in your country. The whole administration in Romania is built in a way that every hospital is administrated by the mayor of Bucharest. They appoint managers that will bring companies in and make acquisitions to steal money for political parties. The whole system is completely broken and in hands of very corrupt people.

"Collective" shows not just the value of investigative journalism, but also the importance of folks questioning how much they trust their government. How do you think your film has exposed or influenced public opinion?

After the fire in 2015 and the revelations in 2016, public opinion started to change. People wanted more and more change. There was a need for reform; one can feel it. We had record attendance in the two weeks in cinemas until the pandemic hit and cinemas closed down. Most viewers were very young, and we saw huge queues of young people. We'd sell out screenings. After the film was released, journalists say their daily inbox had messages from whistleblowers increase tenfold.

What can you say are the risks and rewards of exposing these harsh truths, both for you as a filmmaker but also for journalists like Catalin Tolontan and his team, whose families can be harmed by their actions?

There are always people menacing. Romania is still a country in the EU, so we like to believe that we are safe; it's not Russia or China or the Ukraine. We knew we were surveilled, and our phones were tapped. We took measures to send footage to different sources and lock it in different places. We were prepared for someone to break into our studio. I can't say I was afraid of being physically attacked [during filming] — that was more so after the release. In a country where corruption is so [rampant] what the politicians do is dismantle most of the judicial system.

It's not unlike that here with Trump stacking lower courts with conservative Republican judges to protect his base and not the people at large.

We have the same here in Romania. There were lot of demonstrations against the Social Democrats. As in the States, they organized with the police to beat up non-violent protesters. It was an organized crime. At a certain time, they went and started beating everybody up.

"Collective" also addresses people's efforts to protest and become politically engaged. But the film shows the backlash of that as well with the Social Democrats regaining power. It's depressing! Can you talk about that aspect of the story?

It is depressing, but also what we learned – the learning curve of society is very different. Technocrats came in had a responsibility in showing that politics can be done differently, and they didn't do that. They were very weak. There were very few Ministers like Vlad Voiculescu. The disappointment is that reform was not done as it was promised; the backlash of that is that people don't vote or want to punish ones who promised change even more than folks who started the problem. Societies in democracies need to suffer a lot to understand it is no joke. Democracies can be taken apart, and quality of life can change.

What did you think of Vlad Voiculescu? He is put in a very difficult position, and even after he does good with the disinfectant case, is besieged by the transplant issue. He's sympathetic but also discouraged.

As a storyteller, I was interested in the question: How would I, as a normal citizen, act and react if someone would invest me with this power and in this position. That's the question to ask the viewer. We want to change things, but how would I do it? He's a generally good person. I don't think you can change anything — even if you are the Minister of Health — if you don't have the support of the government or party behind them, and the party is aware that their mandate is given by citizens to govern or to use the power in favor of the citizens. It's a whole complex system. In the States, it's a systematic problem — half the country wanting one thing, the other half wanting another thing. Both parts have their rights and have the right to be right. They are voting against an establishment they were disappointed by. I don't know how a handful of good-intentioned people can change something. The film is optimistic because I see in this rotten world so many good people, so many mensches fighting hard and the courage of the whistleblower and how one changed the healthcare system in Romania. One step forward and two steps back . . .

Can you talk about the inclusion of the sequences featuring Tedy Ursuleanu? It is important to show one of the victim's perspectives, and she surprisingly does not hold a grudge following the tragedy.

For me this was also fascinating. Her looks were destroyed and so much more. She lost friends. I think that comes back to see that basically someone understands that they are still alive. But she's not a different person because she was burned. She would not let the rest of her life be destroyed by holding a grudge or fighting what can't be fought. She's a symbol of evolution. She understands where she is now. "I'm still here, and I am myself, and I won't let them poison me." A lot of us, with less problems, do let ourselves be poisoned by ones who try to destroy society.

"Collective" opens in theaters, virtual screenings, and on demand Nov. 20.