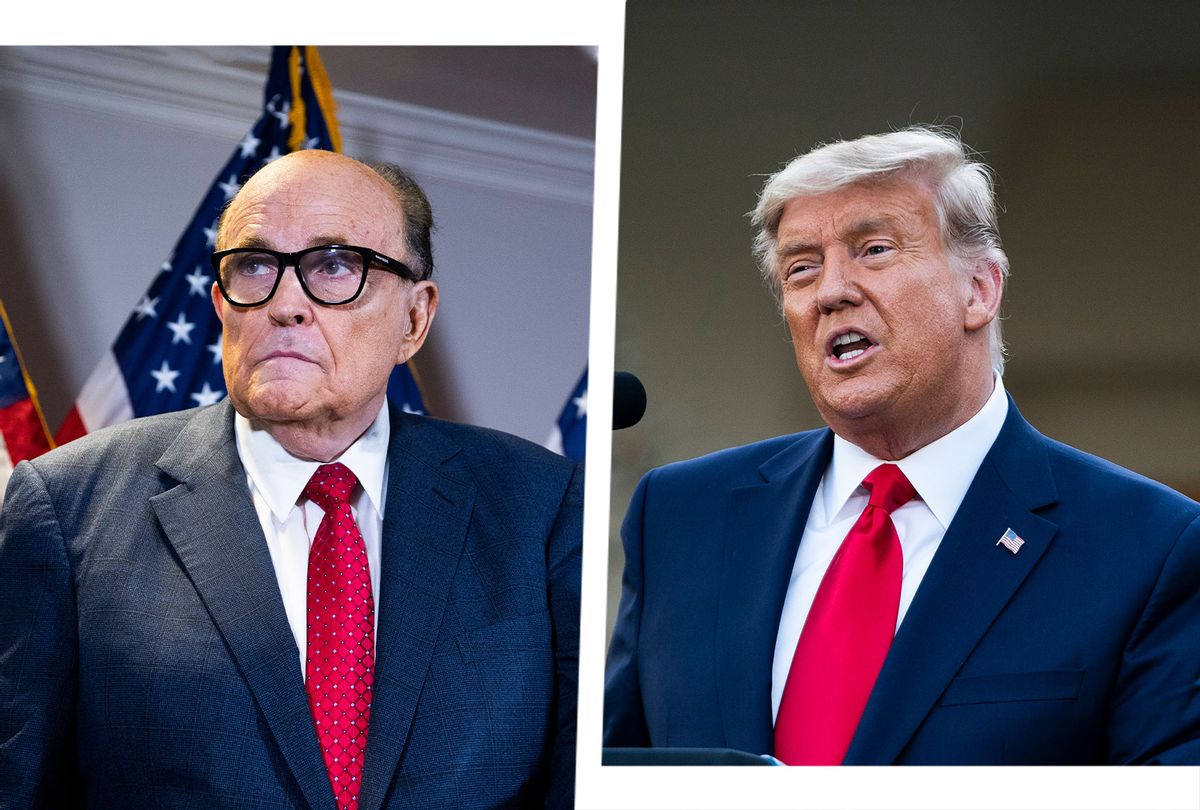 Back in September, Politico's Anita Kumar reported that for the previous year the Trump campaign had been assembling a team of election lawyers from all over the country to familiarize themselves in local election laws and prepare "prewritten legal pleadings that can be hurried to the courthouse the day after the election, as wrangling begins over close results and a crush of mail-in ballots." The effort was led by "a 20-person team of lawyers" from major law firms who were overseeing a strategy in "key states the Trump campaign is targeting, like Pennsylvania, Wisconsin and Michigan." It sounded like a very serious and professional operation, one which came as no surprise to me, since Republicans have specialized in disenfranchising Democratic voters for many decades.

Trump himself repeatedly made clear on the campaign trail what he planned to do, from contesting the validity of mail-in ballots to declaring himself the winner on election night regardless of whether the votes had been counted and filing a flurry of lawsuits contesting the election with an eye toward having "his" judges (including newly-minted Supreme Court Justice Amy Coney Barrett) deliver the election to him if necessary. I don't think anyone can possibly say they are surprised at how he has reacted to losing the election.

In the weeks before Nov. 3, Trump did have that team of high-powered legal talent arguing cases around mail-in ballots and shifting deadlines in various states, some of which did make it to the Supreme Court. But then the election actually happened and vote-counting began, and since then Trump's crack team has been been remarkably unsuccessful. The good lawyers have either been pressured to to quit or threw in the towel themselves as it became patently obvious that they had no evidence of voter fraud.

That hasn't stopped Trump from plowing ahead anyway with the self-described "elite strike force" led by his personal lawyer Rudy Giuliani, last seen prior to the election with his hand down his pants in the latest Borat movie and famously presiding over a post-election press conference at a landscaping company next door to a sex shop and a crematorium. Trump was evidently impressed by Rudy's performance in both venues, because he gave the former LifeLock spokesman (hat tip to Salon's Roger Sollenberger) full authority to conduct the legal strategy to overturn the election results by any means necessary.

CNN reports that Giuliani has taken full control. For instance, upset by what he was hearing from three of the lawyers assigned to argue one of the Pennsylvania cases, the man once described as "America's mayor" fired them on the spot and took over the case — which was being argued the very next day — himself. He hadn't been inside a courtroom in more than 30 years, and it showed. He was very nearly laughed out of court.

Giuliani was undaunted. He immediately pulled together the other members of the "elite strike force": Sidney Powell, who is former national security adviser Michael Flynn's Fox News lawyer; veteran right-wing husband and wife team Victoria Toensing and Joe diGenova, also Fox News lawyers; and over-the-top Trump defender and campaign lawyer Jenna Ellis. None of them have any expertise in election law, but then they don't have a legal strategy either.

Having lost over and over again in court, Trump and his team have switched to their Plan B, which, as longtime Democratic strategist Chris Marshall spelled out in detail in Salon on Thursday, is to delay the certification of the vote in certain states and try to get Republican legislatures to assign electors to vote for Donald Trump instead of the actual winner, Joe Biden. This is based on the theory that if they can create enough chaos around the election results, Republican loyalists will rise to the occasion and "save democracy" from the Democrats, who are allegedly stealing the election.

This idea has been pushed by conservative talk show host Mark Levin and picked up by the right wing as a way to keep their beloved president in office for at least four more years. It's a theory that is very unlikely to prevail, particularly since the Supreme Court just decided a case on "faithless electors" last July, in which the justices made it very clear that whatever the founders may have anticipated in the 18th century, our democracy today demands that electors express the will of the people. It will take some convoluted intellectual gyrations for them to conclude that state officials can simply change the results at their discretion.

In order to blow the smoke as thick as possible, Giuliani and the "strike force" held a press conference at Republican National Committee headquarters on Thursday which was so surreal that it may have displaced the COVID task force briefing where Trump suggested that people might inject disinfectant as the all-time weirdest press conference of the Trump era.

Giuliani, Powell and Ellis held forth for 90 minutes, going full Infowars and throwing out one insane conspiracy theory after another. They said that Dominion voting machines had been created by former Venezuelan President Hugo Chávez (who has been dead for seven years) and financed by George Soros, the Clinton Foundation and "communistic" countries China and Cuba. Just in case that didn't work, the corrupt Democrats had also rigged the vote with a sophisticated computer hack that was only foiled because Trump won so overwhelmingly that it tripped up the algorithm which allowed the "strike force" to catch them in the act. Also, the mail-in ballots were fraudulent because so many of them were filled out properly. (Yes! The fact that there were very few problems with mail-in votes was somehow evidence they were fake!)

Meanwhile, rivulets of black liquid were running down Giuliani's face as if he were an extra in an Alice Cooper video from the 1970s. The assumption is that it was some kind of temporary hair dye. But it could have been embalming fluid, for all we know.

Powell later made the rounds to expand on their theory and she made no bones about what they hope to do:

You'll notice that she just blithely uses the term "overturn," as if that were perfectly normal.

If that doesn't work, the "strike force" are also talking about a Plan C, which would be to delay the vote certification for so long that the states can't send Biden's required 270 electors to Congress by the deadline, which under the 12th Amendment to the Constitution would throw the election to the House, where every state's delegation gets one vote. As luck would have it Republicans hold 26 of the 50 delegations. Surprise!

Is any of this remotely possible? Sure. It's unlikely, but it's possible. It's tempting to think this is all so nuts that it could never possibly happen, but we thought everything Donald Trump has done over the past five years was nuts, and here we are. All our hand-wringing about this plot being un-American and destructive to our democracy is sadly irrelevant — not just to the preposterous Giuliani and the equally preposterous Trump but to the entire Republican Party. They have learned the power of total shamelessness, and it is profound. I would never count them out.