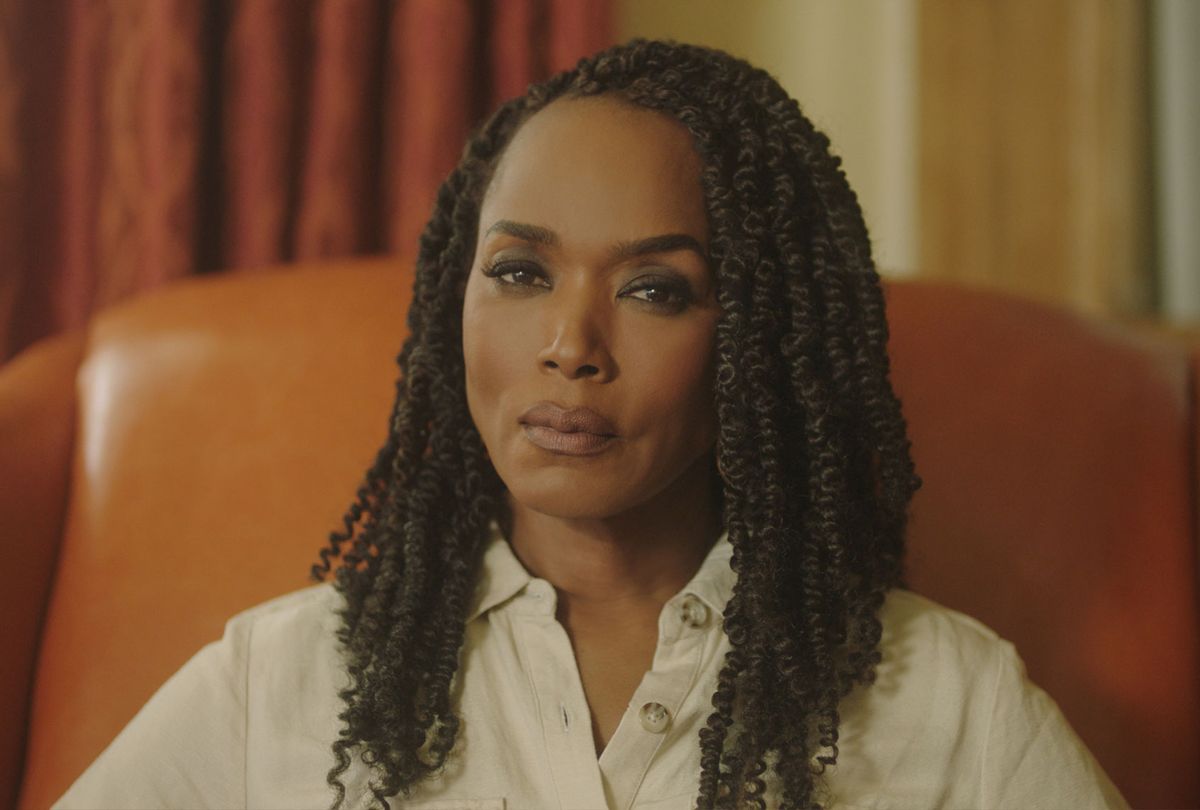 Angela Bassett in "Between the World and Me" (HBO)
--

Topping the end credits for "Between the World and Me" are three pillars of names scrolling heavenward, a gutting in memoriam dedicated to Black men and women murdered in acts of state sanctioned violence or white fear. They are meant to be noticed, and they slip by too quickly. Yet what stands out is how many there are and how relatively few most of the public will recognize.

Ta-Nehisi Coates' work marks its place in time in its statement of purpose in that it is a letter to his son sculpted into memoir. "I write you in your 15th year," he says, marking the moment in time with names as reasons. This would be 2014, a year before the book's publication, the year that "Eric Garner was choked to death for selling cigarettes"; that "Renisha McBride was shot for seeking help, that John Crawford was shot down for browsing in a department store."

There are more names: Tamir Rice. Marlene Pinnock. Later Coates walks his son and the reader through the life of his Howard University classmate Prince Jones, another man shot down by police. Through his story and Coates' words the audience understands that these are lives, not simply names. These are flames of potential stolen from their communities.

She and the movie's executive director Susan Kelechi Watson are Coates' fellow Howard alums and friends; in the book he refers to her as "Aunt Kamilah."

This knowing expands the book's single voice into many, transforming a message from father to son into an array of conversations between mothers and daughters, sisters and brothers, a diasporic chorus of monologues, music and voice.

When "Between the World and Me" hit bookshelves in 2015 it was hailed as a work made to hit America in the heart. Among white people striving to announce their wokeness, having read it became a virtuous signifier. Perhaps it goes without saying that most Black folks absorb it differently in that it's a story we know and live and recognize as an oral history put down on paper (again, given its inspiration by James Baldwin's "The Fire Next Time").

Coates' writing packs clarity into its lyricism, and at just shy of an hour and 20 minutes Forbes' film honors the book's relative economy while enriching every frame with poignance, augmented by Bradford Young's arresting cinematography. Young's expertise in lighting Black skin transforms Coates' prose, adapted by David Teague, into a love letter rendered in moving pictures and poetry. All of it combines to connect in one way to the larger, non-white audience that comes and equally as authentically yet differently to the people of, for and to whom it speaks.

And Forbes has assembled quite the quilt of voices, some taking deeper root than others. Production took place in August 2020 in the midst of heated racial justice protests in cities across the nation, and filming the actors within what appear to be their personal sanctums lends additional intimacy to a bracing conversation.

That we know most of the cast, including Wendell Pierce, Joe Morton, Kendrick Sampson and Oprah (of course) probably helps the wider audience take in the massive substance contained in what these messengers are saying. Forbes ably capitalizes on contrasts between men and women and youth and wisdom at a number of points in order to convey the sadness that Coates' message will always be applicable regardless of the generation.

I was particularly moved by a section that shifts between "Black-ish" star Yara Shahidi and activist Angela Davis reading words from the same passage about Coates' impression of how the Civil Rights movement is taught in schools and his longtime impression of it as insidious programming that tells Black children that their role in when violence is done to them is to respond with peaceful resistance.

A work like this has the task of achieving a balance between acknowledging the savagery inflicted upon Black bodies without making a showcase of Black pain, and holding up the elegance and excellence of a people without glossing over the role that struggle plays in that victory.  Forbes takes great care with this while necessarily acknowledging how trials through suffering inform the Black experience. It may be the only recent major film that includes photos of Emmett Till's funeral that refrains from showing his mutilated body, in keeping with the larger point that this is about the value and struggle of living as a Black person in America.

The air of celebration is evident here, too. Forbes offer the opportunity to bask in Watson's energized monologue about the consciousness and cultural variation Howard bestowed upon its students in the chapter titled "The Mecca."

Another standout is Mahershala Ali, who becomes the voice of Coates' experience with love, an excerpt that's as moving and grace-filled as Phylicia Rashad's embodiment of a bereaved mother's quiet dignity as she recreates Coates' conversation with Jones' mother, Dr. Mabel Jones. In the film and the book there's a line that tells you everything about her: "She was what people once referred to as 'a lady,'" it reads, and without uttering many lines Rashad radiates its meaning in her posture and a face that speaks of distance presence. The simplicity in such scenes stays with you.

She also plugs into the electricity sparked by an actor's close connection with the text. Angela Bassett's righteous edge in speaking about the unattainability of the white American dream in its fullness comes from a real and felt place, and you'll feel it too.

She speaks of the dream of truly feeling the security and luxury implied in pot roast dinners on Sundays and disconnected houses in suburbia as the backdrop to spliced-in scenes from iconic TV series and movies – the tree-lined landscapes of "The Wonder Years," the careless wealth and glamour of "90210" and "Clueless," the presumptive Americana of  "The Brady Bunch," all images promoted as normal.

Similarly Jharrel Jerome is not so much reciting dialogue as he is speaking from experience – perhaps not his own, but one he knows. This is either great acting or a spiritual exhumation of a truth held in his bones. When Mj Rodriguez and Janet Mock recreate Coates' passage about the intense fear and anger at being pulled over by a cop for no discernible reason, it hits as a testimonial that holds true for these women for reasons that as similar and yet, for transgender people, laden with additional levels of anxiety.

"Between the World and Me" bridges 2015 to 2020 with footage of recent protests, the now famous Amy Cooper video and the ongoing outrage over Breonna Taylor's murder. But it refuses to play into the easy tendency to sloganeer. As audio plays of Taylor's mother recounting the obfuscation preventing her from finding out what happened to her daughter the night police officers killed her in her own bed, Forbes records the expressions on her cast's faces as they listen and witness in sorrow and anger.

A line from Coates' book included in the film says, "Knowing that the dream persists by warring with the known world, I was sad for my country. But above all in that moment, I was sad for you."

This refers to the dissonance between the bloody defense of the American dream as white people accept it, and the shared struggle that is the Black American experience. Forbes' film incorporates that fortifying truth as its backbone while praising Blackness as an all-encompassing experience of mood, flavor, music and vision. The result is magnificently solemn and essentially American.

"Between the World and Me" premieres Saturday, Nov. 21 at 8 p.m. on HBO and streams on HBO Max.