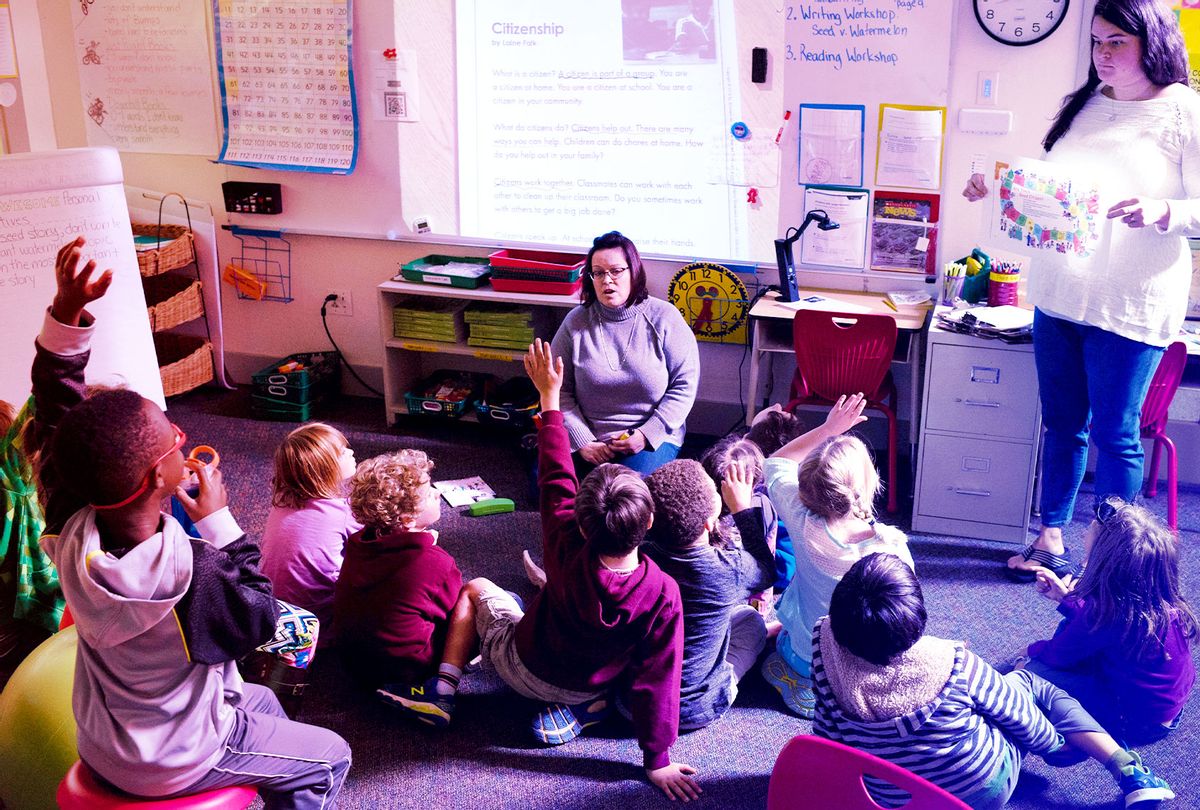 Teachers, Erin Kelly, left, and Dana Lespierre, lead a second grade class in a lesson teaching good citizenship. At Burgundy Farm Country Day School in Alexandria, Virginia, teachers are using the presidential election to educate students about things such as citizenship and character traits. With the issues surrounding the 2016 election, some teachers have avoided discussing the election altogether, while others have assigned students to watch the debates. ( (Sarah L. Voisin/The Washington Post via Getty Images)
--

Civics is a fundamental part of every American primary school curriculum. Yet there is no living American who has experienced a political moment as polarized as this one, where even teachers cannot speak of Trump or Biden without accusations of impartiality from either direction.

Particularly now, as America's democracy itself is straining under the weight of a wanna-be authoritarian, teaching civics seems like a severe challenge, remaining neutral impossible. It is hard to explain this to children — and yet, our teachers must.

Nareissa Smith, a lawyer and former law professor who taught four classes for Varsity Tutors about civic fundamentals in October, two to students from Grades 2 to 5 and two for students from Grades 6 to 8, told Salon that her students were afraid that Trump would attempt to subvert democracy even before he actually did so.

"I will tell you that before the election, the students in my 'Making Democracy Work' course, in some of our exchanges, they were very, very afraid that he would be doing exactly what he's doing now," Smith told Salon. "Their questions were more like, 'Well, you know, what, if he doesn't [leave]? Can he just stay?' There were a lot of questions around that. So if I were doing the course now I would approach it not in a partisan way, but I would approach it by saying that I will go back to the law, and say the concession is a nicety, but the Constitution doesn't require it."

"The conversations that I've had with kids are kind of like, 'this is not normal,'" an anonymous teacher from Georgia, who teaches at a pod school with children ranging in age from 6 to 9, told Salon. "It's like constantly putting out that, 'this is what's happening.' We need to be aware this is not normal."

The teacher also noted that her students are particularly interested in the fact that Georgia, which had not voted for a Democratic presidential candidate since Clinton in 1992, supported Democrat Joe Biden over Trump.

"All of my kids kind of sit around and just talk about how excited they are that Georgia turned blue," the teacher told Salon. "That is an interesting thing too. If you're talking about just party-wise, the families kind of agree, but then it was interesting to see how that like transferred over to these kids conversations' about critical issues, because we didn't all agree necessarily on these issues."

Another anonymous educator and parent coach, who teaches children that range in age from kindergarten through second grade, told Salon that she stresses the importance of students not simply believing what they are told but instead of thinking for themselves.

"Really it's about what is the bigger picture," the teacher told Salon. "And for me, that's teaching kids how to have critical thinking skills and to go seek the truth for themselves."

The teacher added, "The way that I approach it is by talking about what we do know. We are in an election where we are still in a process where ballots are being counted. And even though this is an unprecedented situation, we still have checks and balances in place. And I think that again is the important piece here of talking about how our system works as a government, as opposed to getting into 'He said this, or he did that.' . . . And I think that's important for me to convey, to say that it's okay with not knowing."

Meredith Essalat, principal of a K-8 school in San Francisco and author of "The Overly Honest Teacher," also told Salon that one of the chief responsibilities of educators prior to elections themselves is "to make sure that our students are given all of the information they need to make sound decisions."

"While we teach them about the essential qualities and characteristics of what makes a successful leader— empathy, strength, resilience, camaraderie, respect, wisdom— we do not overtly instruct them on where their political or civic viewpoints should lie," Essalat wrote to Salon. "We must seek, in all circumstances, to instruct in the domain of neutrality. We present both sides to every argument, a 'just the facts' approach to discussing candidates, ballot measures, and political initiatives. Class-wide and small group conversations on the platforms of each candidate and the history and inner workings of the Electoral College help students to learn from one another's perspectives and the questioning of systems."

Bryan, who teaches 8th grade literature, also emphasized to Salon that they use politics to teach critical thinking.

"I use the election process to teach debate skills," Bryan wrote to Salon. "We often don't give children the credit and responsibility to have an academic discussion about politics, but I've found the elections are a perfect time to teach debate etiquette and allow them to talk about their concerns in a controlled matter."

He added, "I did the same thing 4 years ago in the previous election, and I've found that they start out like most of us simply adopting their parents perspective. But I've never had it get out of hand, and we've often had more political discourse than what I've seen in the actual political debates. My students, at the very least, have never told each other to 'shut up.'"