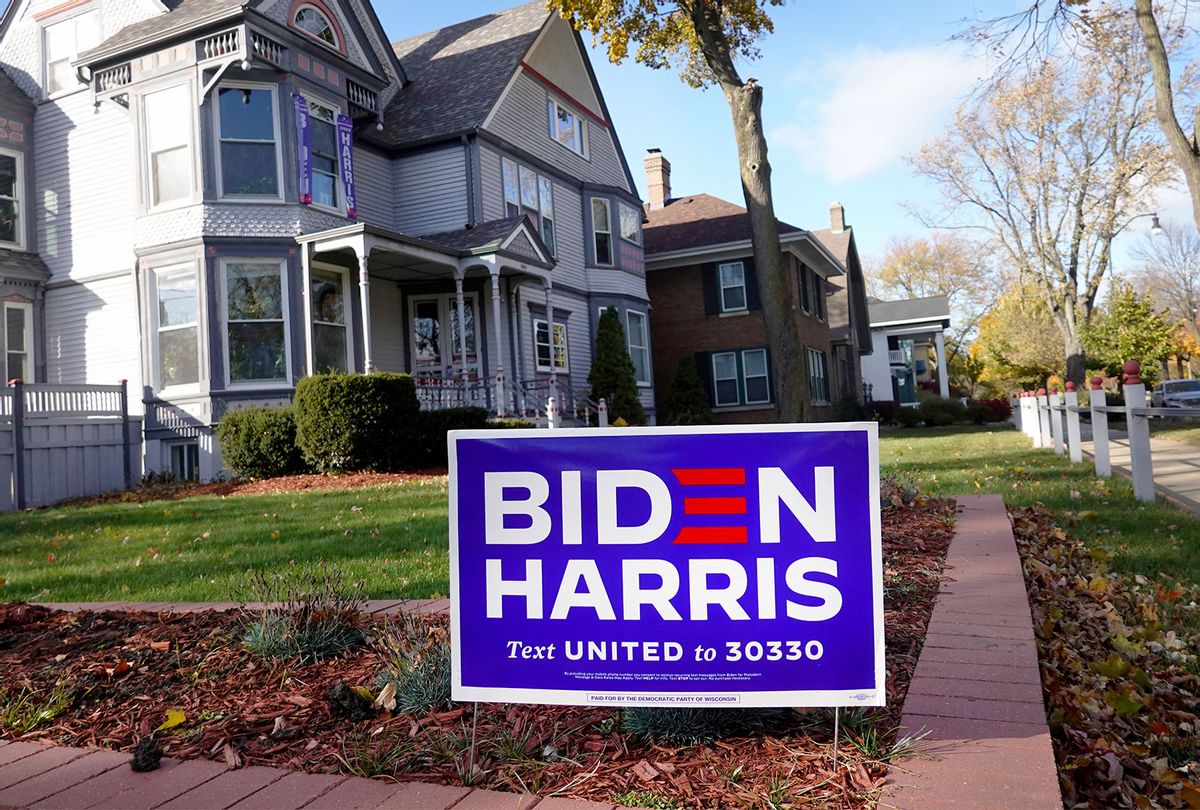 A campaign sign supporting Democratic presidential nominee Joe Biden and his running mate Sen. Kamala Harris (D-CA) sits in the front yard of a home on November 01, 2020 in Racine, Wisconsin. Today is the final day for early voting in Wisconsin, a state which President Donald Trump won with less than 1 percent of the vote in 2016. (Scott Olson/Getty Images)
--

Do conservatives own the phrase "housewife," or can it be reclaimed by liberals? The stereotypes that the phrase "housewife" recalls — manicured lawns, whiteness, nuclear families like in "Leave it to Beaver" — may seem counterposed to liberal values, emblematic of a reactionary ideal of an idyllic American past. But in the 2020 presidential election, President Donald Trump's loss to President-elect Joe Biden was mostly due to voters in the suburbs of important battleground states. Exit polls show that Black women and suburban women were critical to Biden's coalition; as AP News explained, Trump would have won if only men had voted. Trump's loss is owed in part to this tidal shift in women in the suburbs, who banded together and organized in Facebook groups like the 200,000-member strong "'Suburban Housewives' Against Trump," a group that started after Trump's sexist and racist pitches to female voters in the suburbs fell flat.

Back in August, Trump tweeted that the "suburban housewife" would be voting for him. "They want safety & are thrilled that I ended the long running program where low income housing would invade their neighborhood," Trump said. "Biden would reinstall it, in a bigger form, with Corey Booker in charge!" He continued to reiterate this message at campaign rallies in battleground states like Michigan, where he told women he was getting their "husbands back to work."

But the hundreds of thousands of self-identified suburban housewives, Trump's rhetoric motivated them to mobilize against him.

Loni Yeary, who started the Facebook group "'Suburban Housewives' Against Trump," told Salon that Trump's "suburban housewife" tweet was what pushed her over the edge.

"It really angered me," the 40-year-old said. "Because I am a suburban housewife, I'm a stay at home mom to three kids and I live in a suburb of Cincinnati. . . .  I knew a couple of other women who felt the same as I did and I just decided to start a group."

That was back in August. Yeary invited friends from Kentucky, Texas, and Florida, to join the group; they then invited their own friends. Two weeks later, it had grown to over 25,000 members; more than 230,000 women are in the group now.

Yeary realized the group had the potential to be a place where women could organize themselves and their neighbors for Biden, and partnered with the group Red, Wine and Blue, a progressive 501(c)(4) whose stated goal is to "harness the power of suburban women." With their help, "'Suburban Housewives' Against Trump" turned into a centralized online location where suburban women could swap organizing ideas, collaborate together to phone bank, text bank and write postcards for Biden and other Democratic candidates in their communities. Women also regularly shared ideas on how to talk to neighbors and people within their circles to "flip their votes" blue, which was core to the group's "philosophy."

Online organizing was of particular importance in the 2020 presidential election, as in-person political organizing was made more difficult by the pandemic. As ephemeral as a Facebook group might seem in the larger political sense, the group's organizers say that the real-life connections fostered by social media gave their group greater power to change minds.

"Our philosophy has been that if you want to change the vote, you're going to do it through your interpersonal relationships, like friends, coworkers and neighbors," Yeary said. "Sometimes those are pretty awkward conversations to have, but it's important, people are more likely to vote because they know that their neighbor down the street is going to vote for Joe Biden, rather than just somebody randomly calling them or texting them."

To group members, the meaning of the phrase "suburban housewife" is precarious; obviously, there are gendered and — some would argue — outmoded connotations to the phrase. Indeed, in the official title of the group, the phrase "suburban housewives" is rendered in double-quotes, suggesting a facetious or tongue-in-cheek interpretation. Often, members joke about it; one group member said she made a "blue garden" full of Biden-Harris signs in her front lawn as a "suburban housewife" might. Some group discussions center around the sexist tone of "housewife," and how "annoying" it is to be called the term, especially by a man. Yet ultimately, the group focused on election organizing more than philosophical or cultural debates.

Tracy Barnett, a 54-year-old in Charlotte, North Carolina, joined the group early in August. In an interview, she told Salon she was a "lifelong Republican" until 2016. After Trump won the 2016 presidential election, she realized she wanted to get more involved in politics and become more informed. She was alarmed as she watched those in her community and extended networks descend into Trump's "cult of personality," as she called it.

Eventually, a friend invited her to "'Suburban Housewives' Against Trump" on Facebook.

"It was a great place for sourcing and compiling information," Barnett says. "I'd often see people post and say, 'Hey, I've got a colleague (or thread) that is sharing X, Y and Z, I need some information to counteract this,'" Barnett said. She noted that Trump's tweet that precipitated the group showed how "detached" he was from the suburbs.

"'Suburban housewives,' what is that even?" Barnett said. "Nobody's a housewife, and nobody's referring to themselves as a 'suburban housewife,' so there's an incredible tone deafness to that. And then you couple that, with the implied racist segregationist rhetoric, and it just . . . insulting."

Indeed, Trump's attempt to reach women who live in the suburbs may have been meant to appeal to a part of his "base" who equate the so-called "American dream" to suburbs full of all white, middle-class families that exhibit traditional gender roles. While American suburbia is far from a "utopia," historian Lily Geismer told Salon, our nation's suburbs have changed dramatically over the last three decades.

"The suburbs have gone through a sort of tremendous transformation, which I think is one of the things that in some ways the election results actually demonstrates," Geismer said. "And one of the biggest trends is in their racial diversity; the suburbs by no means have never been a monolith, but that's been especially true in the last 30 years."

Miesha Tate Ander told Salon she joined the Facebook group to contribute to the "many faces, many colors" that make up the suburbs today.

"In [Trump's] mind, there's no such thing as a Black 'suburban housewife,'" Ander said. "It's not just white women who live in the suburbs."

Ander, who is 43 and living in Atlanta, started a company called Grab 'em by the Postcard, e-postcards designed to, in her words, empower and uplift marginalized and undecided voters. Those e-cards became popular in the Facebook group. Likewise, Ander said she's also found the Facebook group to be a place where women who might not otherwise connect in real life become friends.

"You've got women in here who were previous[ly] Republican supporters. . . but it doesn't even matter the party. Honestly it just brings together humanity in such a huge way," Ander said. "And that's what I really appreciate."

"'Suburban Housewives' Against Trump" isn't the only liberal "suburban women" organizing group that organically sprouted up online. There's also "Suburban Women for Kamala Harris," a Black women–led group that also has over 200,000 members. According to the group's description, it's a reaction to Trump's adviser's comment that Harris would "scare the s**t out of suburban women."

Geismer said suburban women organizing is nothing new for either the left or right. Historically, "suburban liberals" have used their identity as suburban parents to their advantage, which she added we're seeing again in the "resistance mom" movement on the left. However, there are questions around how far the resistance-mom activism can go, and how this cohort can push to dismantle systemic racism; exit polls found that fifty-three percent of white women in America still voted for Trump in 2020.

As a historian, Geismer said she's interested in this "cleaning" of the "housewife" category, and wonders if it will stick beyond Trump. "It's a dated term in many ways," Geismer said. "I would be fascinated at the staying power of that idea going forward without Trump as the focus."

As Yeary explained, the title of the group was a direct reaction to Trump's comments. While she hopes the group continues to encourage suburban women to stay engaged in politics and support local Democratic candidates, the term "housewife" will likely stick around, even as Trump's star fades.

"Both words are key to describing our group, but I recognize that not all the women in the group identify as 'suburban; or as a 'housewife,'" Yeary said. "I do like the idea of keeping 'housewives' in the name, just as a snarky reminder of where the group's name came from in the first place; using that description allows us to claim that word and define it how we see fit."