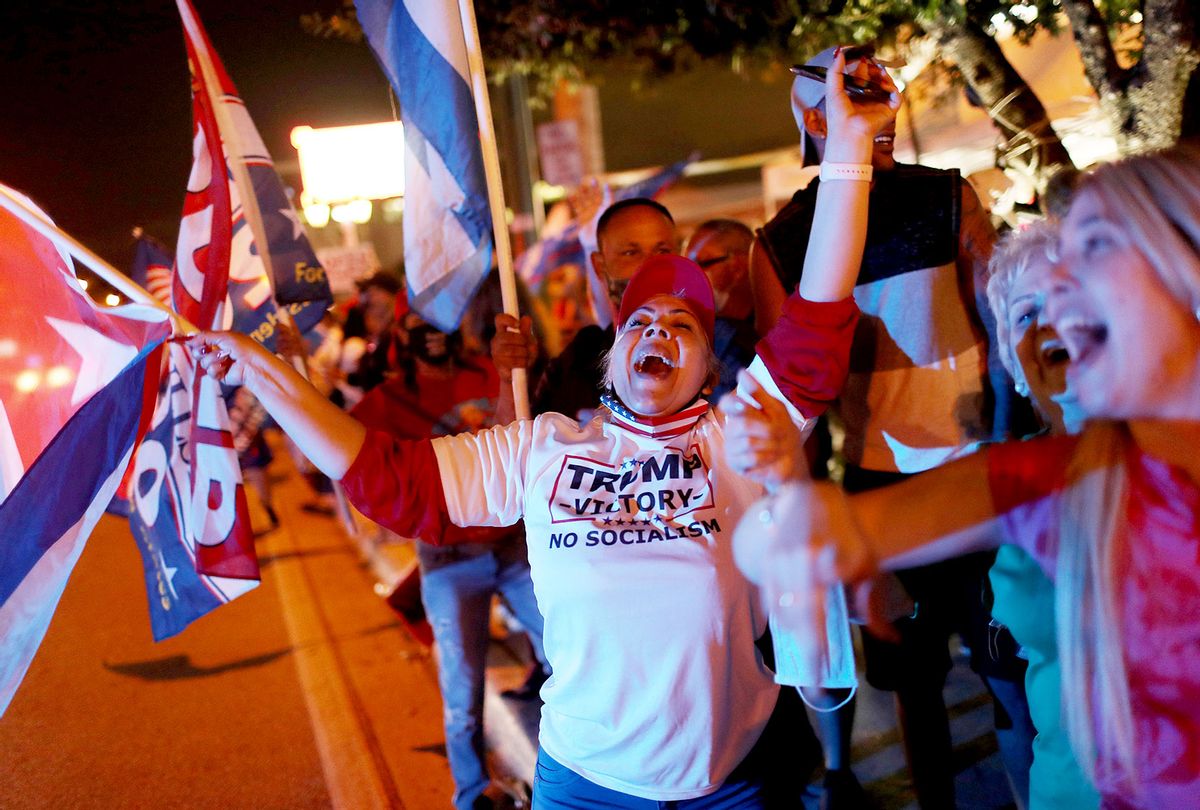 Supporters of U.S. President Donald Trump cheer outside of the Versailles restaurant as they await the results of the presidential election on November 03, 2020 in Miami, Florida. (Joe Raedle/Getty Images)
--

This year, one of the GOP victories in Florida came when Ileana Garcia, co-founder of Latinas for Trump, defeated incumbent Democrat José Javier Rodríguez in a state Senate race. It was a narrow victory, however, and Miami Herald journalists Samantha J. Gross and Ana Ceballos are reporting that Rodriguez has demanded an investigation of a third-party candidate, Alex Rodríguez.

"Alex Rodriguez' candidacy appeared to exist for only one reason: to suck votes away from incumbent José Javier Rodríguez, who shares the same surname," according to Gross and Ceballos. "The incumbent lost by just 34 votes, and he is now calling for an investigation into Alex Rodriguez — and whoever may have put him up to run."

"Sources with knowledge of the investigation tell the Miami Herald that Miami-Dade state prosecutors are now probing the mysterious candidacy, which has also led to a series of investigative reports from the Herald and other news outlets such as WPLG-10 and Univision, whose reporters found Rodriguez renting a home in Palm Beach County — not in Miami-Dade County, where he filed to vote and run for state office," the Herald reporters explain.

In a video posted on Facebook, José Javier Rodríguez argued, "Democracy requires transparency. In order to achieve that, I believe this election requires a full investigation so that those who may have violated the law are held to account and so that such tactics are not used in future elections."

Garcia defeated José Javier Rodríguez in Miami-Dade County, which is one of the more Democratic-leaning areas of Florida. And that loss wasn't the only disappointment that Democrats suffered in South Florida this year: Joe Biden underperformed among Latinos in Miami-Dade County compared to Democrat Hillary Clinton in 2016, and Florida's 29 electoral votes were called for President Donald Trump on Election Night — although Bided ended up winning the election, with 306 electoral votes and a lead of more than 6 million in the popular vote.

According to Gross and Ceballos, Florida-based elections attorney Juan Carlos Plana plans to file an ethics complaint against Alex Rodriguez and alleges that his financial disclosure form is "improper."

Plana told the Herald, "There are more questions than answers, but the questions don't seem like they will lead to a good place. People like this don't pop up and say they are going to run for state Senate."