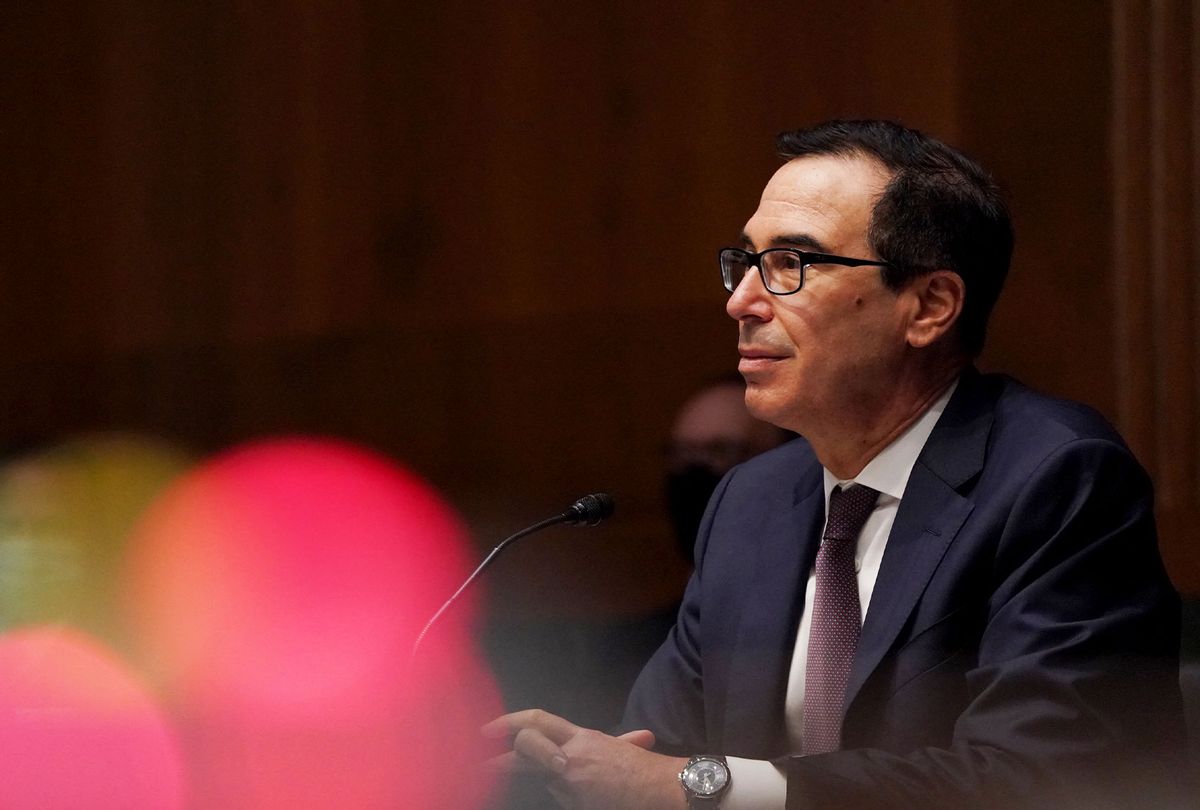 Mnuchin will claw back $429 billion in funds Congress allocated to the Federal Reserve for emergency lending facilities in the Cares Act and another $26 billion allocated to the Treasury for direct loans to businesses and put it in the agency's General Fund, a Treasury spokesperson told Bloomberg News on Tuesday. The move would block the Biden administration from using the funds without congressional approval.

"The move will leave [Janet] Yellen — selected by president-elect Joe Biden as his nominee for Treasury secretary — with just under $80 billion available in the Treasury's Exchange Stabilization Fund," the outlet reported, adding that "Mnuchin isn't required to move the money into the General Fund — the Cares Act states that the Treasury Department can maintain access to the money by keeping it in its Exchange Stabilization Fund until 2026."

Mnuchin sent a letter to Federal Reserve Chairman Jerome Powell last week asking him to return the money. The Fed agreed to return the funds but publicly objected to the move.

The Fed said in a statement that it "would prefer that the full suite of emergency facilities established during the coronavirus pandemic continue to serve their important role as a backstop for our still-strained and vulnerable economy."

"I think given where the economy is — and there is so much uncertainty still out there —  it is prudent to keep those things open," Raphael Bostic, the president of the Atlanta Federal Reserve Bank, told Bloomberg.

Some analysts raised questions about whether the move was even legal. Skanda Amarnath, a former analyst at the New York Fed, said the clawback was in direct "violation of the Cares Act."

"This is Treasury's latest ham-handed effort to undermine the Biden administration. The good news is that it's illegal and can be reversed next year," Bharat Ramamurti, a member of the Congressional Oversight Commission that oversees Cares Act funding, said. "For its part, the Fed should not go along with this attempted sabotage and should retain the CARES Act funds it already has."

Ernie Tedeschi, a former Treasury Department economist, said it was a "dangerous move" ahead of what is expected to be a devastating winter.

"It's one more enormous risk we are piling onto the winter in the U.S. atop of other risks already there," he told Business Insider. "We may need that backstop again as cases have now blown through their prior peaks, state and local governments are making cuts, and we're about to kick off millions of people from unemployment insurance."

Mnuchin, whose move was backed by Senate Majority Leader Mitch McConnell, R-Ky., told CNBC last week that Congress — which has stalled on a second round of relief funding since March — should decide how to repurpose the funds.

Sen. Ron Wyden, D-Ore., the top Democrat on the Senate Finance Committee, said Mnuchin's effort was "shameful" amid a massive spike in coronavirus infections and the dire need for additional relief funding.

"As the economy backslides amid skyrocketing COVID-19 cases, Secretary Mnuchin is engaged in economic sabotage and trying to tie the Biden administration's hands," he said in a statement to Reuters.

Sen. Elizabeth Warren, D-Mass., said the clawback showed that Mnuchin's pandemic response had been a "corrupt and incompetent failure."

"He needs to stop sabotaging the Biden administration from cleaning up his mess and helping states, cities, and small businesses," she tweeted.

"Biden will work with leaders across government to ensure Main Street businesses and state and local governments have the support and access to credit they need to weather this storm," spokeswoman Kate Bedingfield told Bloomberg.