A sweet Thanksgiving after all: America has rebuffed Trump's assault on democracy

So much went wrong in 2020. There has been death, suffering and immense anxiety. But our nation will be stronger 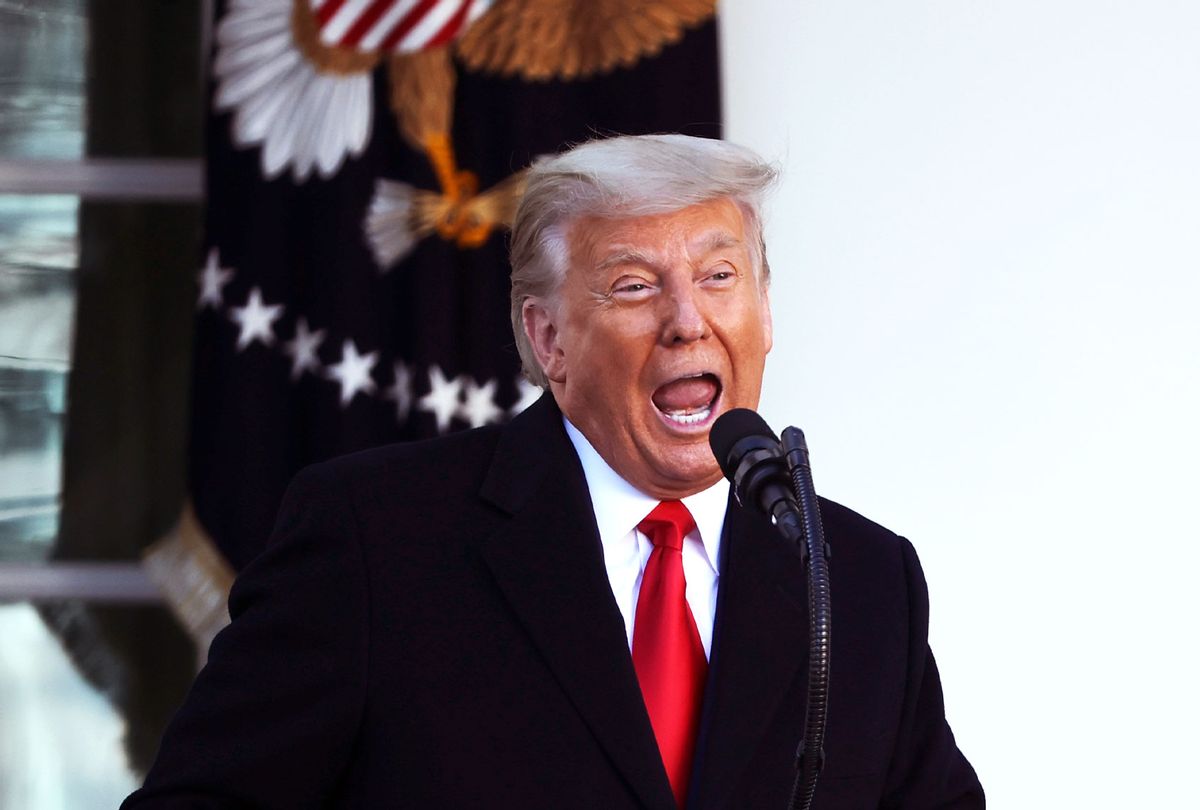 U.S. President Donald Trump speaks as he prepares to give the National Thanksgiving Turkey a presidential pardon during the traditional event in the Rose Garden of the White House November 24, 2020 in Washington, DC. (Chip Somodevilla/Getty Images)
--

Thanksgiving 2020 is not a happy time for most Americans. The year-long coronavirus pandemic has taken its toll. We have now lost 260,000 fellow citizens. Because the virus is not contained — in fact we are in the midst of a serious fall surge — relatively few Americans are traveling to see family members and loved ones. Staying safe from the virus remains a top priority. Wearing a mask and social distancing is precluding normal Thanksgiving gatherings and meals. It is a disheartening and lonely time for many of us.

But this Thanksgiving is particularly sweet because our country has just rebuffed a frontal assault by Donald Trump. Democracy has just beaten back his attempt to steal this election. Our Constitution and our judicial system have prevailed over the malignant and nefarious intent of the dictator-wannabe.

Joe Biden beat Trump fair and square in the election. He garnered the most votes by a candidate in history. His Electoral College victory was clear. And it was the most open and transparent election process in history.

Donald Trump has refused to concede the election because his narcissistic personality pathology does not allow him to acknowledge defeat or loss. Much more sinister than that, Trump believed that he was entitled to a second term because he is smarter and stronger and richer than anyone else in the room. He could not fathom the possibility that his greatness could be defeated by such an ordinary and mortal man, Joe Biden.

Trump is addicted to power and adulation and greed. He has a grandiose and superior self-image that he must feed at all times. He has no conscience and no moral compass. He knows he is likely to face federal and state criminal charges once he leaves office. He desperately tries to cover up his corruption and his purposeful cruelty.

So Trump tried to steal the election. Pure and simple. He attempted a coup against America. His intent was to subvert democracy and to figure out a way to manipulate and bully himself into an election victory. He was determined to stay in power for reasons of self-preservation and self-aggrandizement.

He started by telling the public that the election was rigged and that it had been snatched away from him by colluding Democrats and other forces. He concocted and spread conspiracy theories. He lied.

Then he insisted that there was voter fraud, which he tried to manufacture in certain states. He tried to have tens of thousands of votes thrown out — mostly votes by people of color. In the end, he urged legislatures and election officials to "flip" results in their states.

All the while, Trump or his allies kept filing baseless and frivolous lawsuits as fast as they could be typed up. But the judicial system stood stout. None of his lawsuits had merit and they were dismissed quickly in the courts.

Finally, a Republican canvassing board member in Michigan and the Republican secretary of state in Georgia sealed Trump's fate by certifying their respective states' election results. It was game, set, match.

Trump's attempt to steal the election was crushed. It was over. Joe Biden is the president-elect. Donald Trump will not have a second term. He will be leaving the Oval Office — one way or another — on Jan. 20, 2021.

Let us not be naive. Trump can continue to inflict much damage on America in the next two months. Based on his personality pathology, it is likely that he will try to leave the nation in a pile of rubble for his successor. After all, he does not want another man to eclipse him in achievement or adulation from the public.

Trump does not love America, because he is too busy loving and protecting himself. He is not capable of loving others. He is not capable of being a public servant. He does not care about Americans' safety, happiness or well-being. If he did, he would have taken active and definitive steps to contain and defeat the pandemic.

Congressional Republicans have been unapologetic enablers of Trump. They still are. Their complicity will be their legacy. History books and doctoral dissertations will be written about their blind and unhealthy loyalty to a president who was disordered and inept and cruel.

Millions of Americans have given their allegiance to an undeserving and toxic leader. Their perceptions and attitudes about him will gradually change as his misdeeds and corrupt acts are brought to light and prosecuted. They will be deprogrammed from their cult-like leader as his prominence in public consciousness is diminished.

Trump will spend his remaining years fending off criminal charges and basking in the aggrieved glow of victimhood. Americans will finally see through his thinly-veiled veneer of buffoonery. His public image will be tarnished forever. His place on the lowest rung of the presidential ladder will be set in stone. No Mount Rushmore, no Nobel Peace Prize, no Man of the Year award, no Trump vaccine.

Joe Biden will be the father figure we deserve to confront our existential challenges: a deadly pandemic, an economic recession, and the loss of trust in our democratic institutions and norms. He has the temperament, the experience, the empathy and the wisdom to lead us out of the black hole of the past four years.

Biden is not perfect. But he will provide the corrective emotional experience we need to overcome Trump's reign of trauma, dishonesty, corruption and total lack of empathy. Biden will defeat the pandemic, revive the economy and restore trust in our institutions and the free press. We will return to an emphasis on science and truth. Racism, xenophobia and terrorism will be rooted out. We will once again be a people of unity and inclusiveness. And our shining and indispensable place in the world will be re-established.

So while this Thanksgiving will be remembered by many as a time of sadness and grieving, let us not forget that America just rebuffed the subversion of democracy by the worst president in American history. Our election was not stolen. A coup was stopped. And we will be rid of Donald Trump and his malignant narcissism in less than two months.

Good has triumphed over evil. Honesty and truth have won out over lies and conspiracy theories. Democracy has prevailed over a full frontal attack.

What a sweet Thanksgiving this is. It's a time to celebrate our America — and a time to remember the tens of thousands of Americans who have lost their lives on our bumpy road to achieving "a more perfect union."