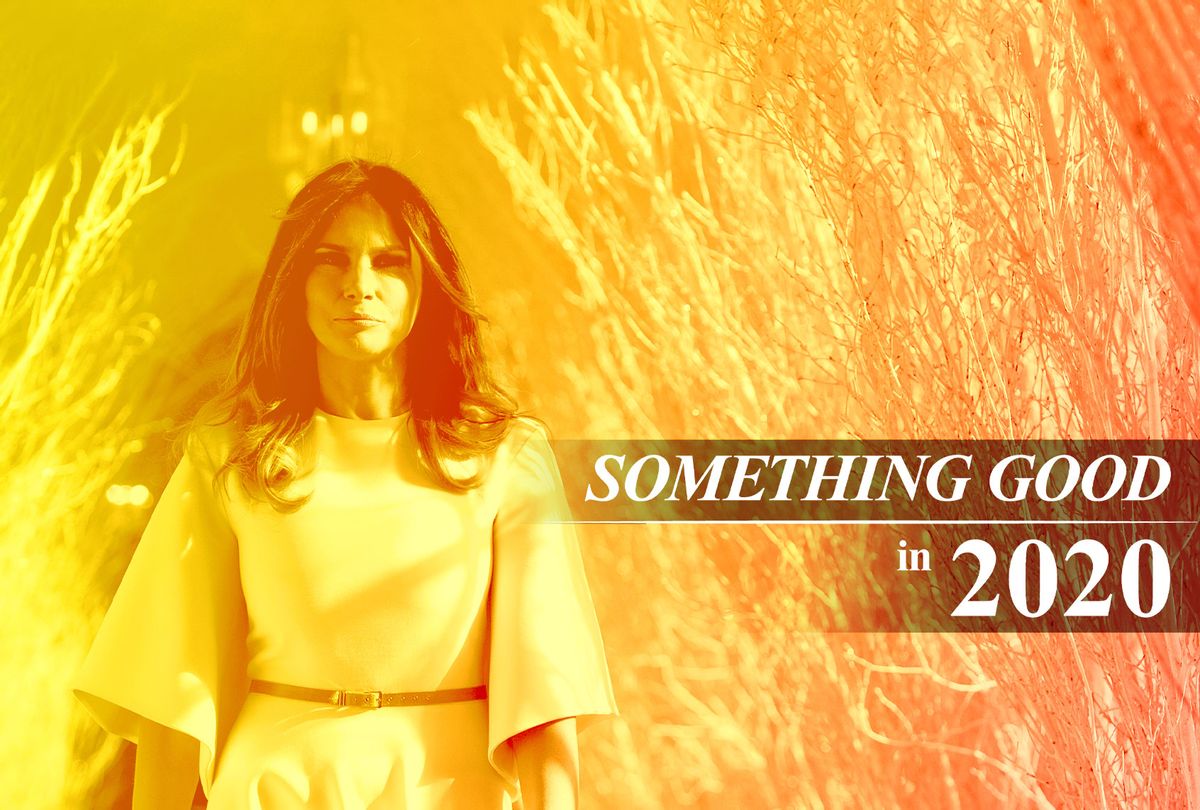 "They say I'm complicit, I'm the same like him, I support him, I don't say enough, I don't do enough where I am," I heard First Lady Melania Trump complaining in an audio clip recorded surreptitiously by her former confidant and adviser Stephanie Winston Wolkoff in the summer of 2018. The clip was then released on October 1, 2020, in support of Wolkoff's tell-all book, which I will not read.

"I'm working like a . . .  ass, my ass off on the Christmas stuff," Melania whinged as Wolkoff murmured supportively and the world held its breath on like a . . . like a . . . where was that sentence heading before it swerved? "Who gives a fuck about Christmas stuff and decoration, but I need to do it, right?"

It was an experience so flavored with delirium—and I don't say that lightly after the last five years—that I had to play it again and again to make sure I was awake, alive, not feverish, and indeed hearing the first lady of the United States say "who gives a fuck about Christmas stuff and decoration" on tape. (Not, to be clear, because I think any first partner should have to give a fuck about Christmas stuff and decoration if they don't want to! But if you're going to crap on White House tradition while living in it, you should at least be doing something more worthwhile instead, and complaining about magazine profiles doesn't count.)

Why is hearing Melania dump on Christmas something good that happened in 2020? By any normal yardstick, it's an ugly moment! And it's an ugly moment quickly overshadowed—just hours later, in fact—by President Donald Trump announcing that he and Melania had tested positive for COVID-19. But this grotesque little blurt of selfish, petty grievance is worth taking a beat to appreciate for what it is: the final crack in the first lady's carefully applied veneer of ambivalence, exposing her once and for all as just another Trump, with a rotting sack of writhing worms for a heart and a knockoff Fabergé egg rattling in her skull where a brain might normally be.

And so the final death rattles of #FreeMelania finally stilled, and in their place a recording of the first lady going on to mock the unfathomable pain and trauma of children separated from their parents at the border by her husband's henchmen's orders. "Give me a fucking break," she snarled, then segued into a common lie about Barack Obama — a Trump dinner table staple, I'm sure. "Where they were saying anything when Obama did that?" (They weren't saying anything because Obama-era border policies separated children when they couldn't prove they were with their legal guardians or there were concerns for their safety, not as a strategy to terrorize migrants, but hey, someone's been paying attention to all of that Fox News blaring from her husband's distant bedroom.)

That Melania can't grasp the spiritual connection between the ritual act of giving a fuck about Christmas and her squandered opportunity to give a fuck about the children and parents terrorized by her husband's administration told us the last thing we ever need to know about her in one authoritative audio clip.

To paraphrase an overused and misattributed phrase, better for your inevitable lifestyle brand comeback efforts to keep your mouth shut and have them wonder if you're really a Trump than to open it and remove all doubt. But we are better off knowing for sure who Melania is and what she stands for. Now that her character is defined with hard proof, let this be our final memory of Melania Trump's QVC Jackie O cosplay as she marches off, God willing, into the Mar-a-Lago sunset for good.