Did anything good happen in 2020? We dared ourselves to look for the bright spots 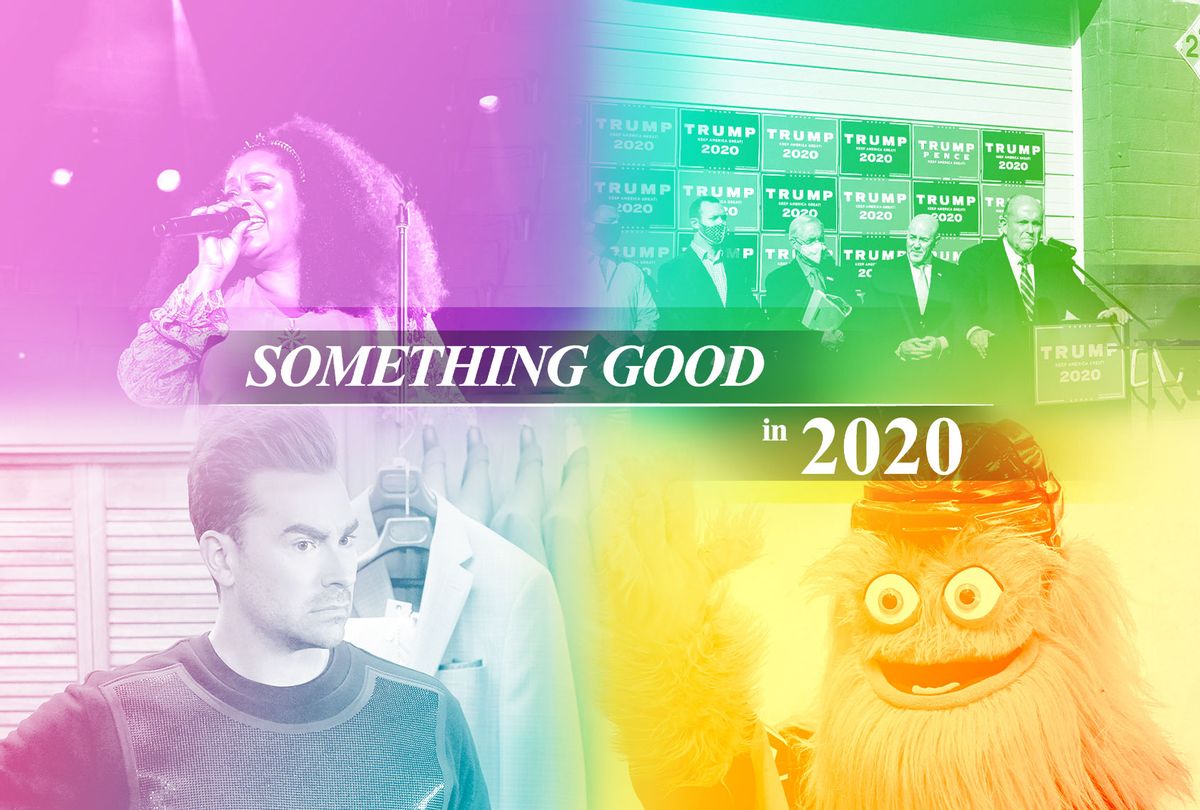 Something Good in 2020 (Photo illustration by Salon/Getty Images)
--

It's been a hell of a year, literally. A deadly pandemic that continues to claim lives, while a robust  disinformation campaign actively undermines the public's understanding of its severity, prevention and treatment. People out of work and industries devastated, with inadequate bandages offered by our federal response. Police rioting in the streets of our cities when those they are supposed to serve and protect dared to demand they do so in the names of Breonna Taylor, George Floyd, Rayshard Brooks, and so many more. Right-wing domestic terrorism on the rise. A brutal election made even more stressful by a lengthier decision timeline.

To top it all off, an attempted coup, for chrissakes, made not the least bit less alarming by its foretold inevitability.

Every day brings a new opportunity to uncover abuses of public trust, analyze our various civic and epistemic crises, and expose the corrosive mendacity and unchecked greed of undeserving clowns in positions of ever-growing power. You read our work; you know. Amid all of that bad, was there anything to celebrate about this awful year, save its passing — if we even make it to December 31? It felt like a dare: Name something good that happened in 2020. Just one.

We like a challenge. Here's what we found. (We had one ground rule: No picking "the outcome of the presidential election.")

Some of these are personal experiences, while some are communal. Some show how art and artistic experiences endure, despite the brutal circumstances. Many came out of deliberate and accidental attempts at making the best of an otherwise crummy year. Some are moments in time that we're preserving and reliving in appreciation, but many are ongoing pleasures and satisfactions you can seek out if they appeal.

Yes, some are born of schadenfreude (and a need to laugh at the absurd death rattles of the outgoing administration) but most from genuine affection. All are sincerely appreciated. So here they are. May this question be easier to answer in years to come.

The Four Seasons Total Landscaping fiasco gave us a reason to laugh at 2020
by Ashlie D. Stevens
"We as a nation need to remember where the travesty of the Trump administration died with a whimper"

Verzuz battles brought us together to bond over live music again
by Melanie McFarland
The pandemic took live music away from us. Verzuz gave it back and brought us closer to the musicians we love

Thank you, Gritty, rallying with us to save our democracy
by Amanda Marcotte
The chaotic orange mascot for the Philadelphia Flyers became an icon of democracy in 2020

Weird Al's "We're All Doomed" nailed this sh*tshow of a year
by Matthew Rozsa
In a single music video, Weird Al and The Gregory Brothers summed up the zeitgeist of 2020 as a "raging hellscape"

"Schitt's Creek" was my saving grace in the early shutdown days
by Erin Keane
When Moira Rose wailed, "Pick up a hammer and nail this coffin shut!" I felt it in my bones

Fanny packs are back, baby! A weird fashion silver lining in a sweatpants year
by Hanh Nguyen
I imagine this is how the first Scotsman who adorned himself with a sporran felt – proud, ready to tackle anything

Ronan Farrow's voices (and other audiobook delights) helped me get through this year
by Hanh Nguyen
Reading while I jog or do chores? Great! But also, give me all the random voices and accents while you're at it

"Kentucky Route Zero," a magical realism masterpiece, is proof art can thrive in trying times
by Keith A. Spencer
The video game is a 21st century combination of a Southern Gothic and magical realist novel

Getting engaged in this otherwise hellish year: An act of faith in a shared future
by Nicole Karlis
A good year is simply when it ends with the people you love still there

This year, we conquered breakfast
by Justin Pelofsky and Alex Wittenberg
The pandemic forced us both to slow down and crack the morning meal code

During a dark year, a dream realized: How the pandemic brought me back to school
by Mary Elizabeth Williams
I wouldn't be in my master's program — a dream I've long deferred — without the pandemic rearranging my life

The people in the TV who talk to me: This is what comfort in 2020 feels like
by Chauncey DeVega
In my kinder and gentler personal version of Cronenberg's "Videodrome," my favorite shows kept me company at home