What will American politics be like after Trump? First of all, he's not going away

Trump's coup is collapsing, but the damage is done. He's shown us the system is broken. What will we do about it? 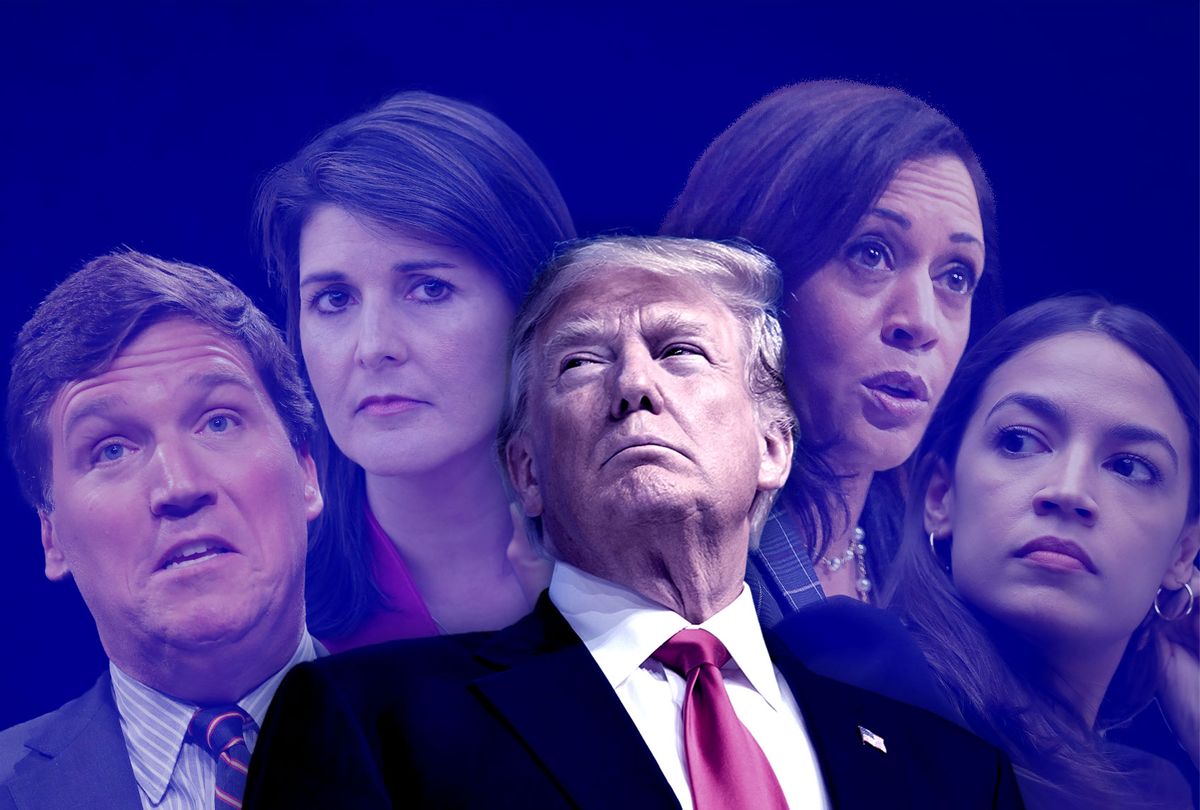 Over the last couple of weeks, the media caste has been indulging in extensive literary meditation in how and whether we can break our addiction to Donald Trump. "We" in this case is a large category: There's no question that everyone from tabloid-TV talking heads to Ivy-educated columnists has flocked to Trump like ants to a sticky-bun picnic, but also that our readers and viewers have enabled and encouraged us at every step.

When people asked me, during the first year or two of the Trump phenomenon, why Salon didn't simply ignore him, I would mildly reply, "Well, you should see the numbers." It was and remains true that stories about the awfulness of the Trump regime — about its total fascist victory, its impending downfall or anything in between — outperform every other category of reporting, commentary or analysis we can possibly offer. (In fairness, over the past few months recipes and food stories have been doing well too. I wonder why!)

But I also recognize there is something of the collaborator about that answer, something of the Nuremberg defendant assuring the court that he was only following orders, and had no particular investment in what did or didn't happen. Faced with the likely and then certain victory of Joe Biden in the presidential election, those of us in the defendant's box began to mop our brows in relief, mixed with no small amount of confusion: Whatever will we do, now that he's gone?

That has turned out to be a rhetorical question, at least so far. Like so many addictions or goblins or villainous specters in horror movies (full credit to Democratic strategist Chris Marshall for his marvelous and terrifying Salon article last week), Donald Trump has no intention of going anywhere. He has spent the last week — which felt like a year — shamelessly and unapologetically trying to overturn the results of an election that appears to have gone relatively smoothly and has yielded a clear and certain verdict.

Thank God for that, I guess, because if the result actually had been close, we'd probably be sweating this out right up to the Electoral College vote. It's an enormous national humiliation that our so-called president is eagerly attempting to find a pseudo-constitutional loophole through which to stage a coup that would end even the pretense of democracy in America. It might, through the long lens of history, be an even worse humiliation that the attempt is so amateurish, conducted by a deranged alcoholic lawyer with motor oil leaking out of his head and an assemblage of hacks and crackpots who allege, in the ever-quotable words of John Bolton, a conspiracy "so vast and so successful that apparently there's no evidence of it."

Trump's coup attempt is falling apart, do not doubt that. If the sniveling quislings of the Republican Party are reluctant to openly confront the massive edifice of unreality in TrumpWorld, they at least recognize that it will eventually collapse on its own, and sooner rather than later. Even Trump himself appears to understand that, after his own animalistic fashion.

As the New York Times reported on Sunday, Trump apparently intends to retain control of the Republican National Committee after he leaves office. This is, to say the most tedious thing possible, unprecedented — ex-presidents tend to retreat to the back of the room and stay quiet, and defeated ex-presidents even more so. You certainly didn't see Jimmy Carter or George H.W. Bush trying to wield any clout in their respective parties; they didn't have any.

Ronna McDaniel, the RNC's current chair, apparently intends to run for re-election on the premise that she's not as much of a Trump sycophant as those who might succeed her, such as Donald Trump Jr. or his dazzlingly evil girlfriend, Kimberly Guilfoyle, who struck terror in the hearts of children of all ages with her impromptu monologue from Roald Dahl's "The Witches" at this year's Republican convention. Maybe Trump wants to keep the party apparatus in his stubby grasp to freeze out potential opponents in a 2024 presidential campaign, Grover Cleveland-style, and maybe it's just a new iteration of the lifelong Trumpian con game. Honestly, what's the difference?

So the plaintive questions about what we will possibly do with ourselves after Trump leaves the scene are the wrong questions, or at least they're far too small to match the scale of our predicament. As fables and fairy tales always make clear, conditions had to be ripe for the evil giant or the dark queen, Sauron or Voldemort, to rise to power in the first place. The story about Eve, the apple and the serpent is a classic example of misogynistic blame-shifting, no doubt. But at least it puts the blame on an ambiguous human weakness we can all identify with: Of course she wanted to know; you or I would have done the same. And who is to say it didn't turn out better this way, and that no other pathway was even possible?

Who or what will Americans be after Trump? We will be the same flawed people and depleted, crisis-addled nation we were before, with the conflicts laid bare and no longer avoidable. It sounds incredibly callous to say that Trump did us a favor, and I certainly don't mean that anything about his presidency was beneficial to human life or the survival of the planet. But his cruelty, his vulgarity and his open contempt for democracy, the rule of law and constitutional order woke many of us up — and I don't entirely exclude his voters and supporters — to the deep wounds in our society, the lack of any shared understanding of reality and the profound apprehension about the future. (That, along with Netflix, is perhaps the only thing all Americans share.)

As for what politics will be like after Trump, the only possible answer is that we don't know yet and it's also too small a question. Politics will be like it was before, only more so: Mired in contradiction, with the two-party system deeply entrenched yet both established parties headed for the rocks. When you look at Trump's 74 million votes — nearly 12 million more than he got in 2016 — and robust Republican victories from the Senate and House on down, there's no doubt that the supposedly-doomed GOP has found a new lease on life on the worst possible terms, as the party of white grievance, "traditional" masculinity, unalloyed authoritarianism and paranoid conspiracy theory.

It doesn't seem as if Trump's toxic but undeniable charisma is the only factor driving this undead Republican revival, but whether anyone else can create a modified or improved "Trumpism without Trump" remains an open question, as well as an academic one, for the time being. Many people have their eyes on that prize — we could start the list with Tucker Carlson of Fox News, Sen. Josh Hawley of Missouri and Gov. Kristi Noem of South Dakota — but whoever follows Trump as the next Republican nominee may quite literally have to wrest the party from his cold, dead, aspartame-infused fingers.

And then there are the Democrats. Oh, the Democrats! What do you want me to say that hasn't been said a thousand times? They just elected a 78-year-old president, and the top three Democrats in the House leadership are all over 80. Chuck Schumer, who still has a mathematical chance of becoming Senate majority leader early next year, turns a relatively sprightly 70 this week. (Happy birthday, you plodding nonentity!) More to the point, the Democrats just conducted yet another campaign based on the stirring claim that the other party is crazy and evil and they're not — which has the admitted benefit of being more true than ever before — which concluded, as usual, with mixed and disputed results.

Anyone who has ever read anything I have written will probably conclude that I'm inclined to favor one side over the other in the Democratic Party's endless factional warfare between "progressives" and "moderates," or whatever terms of art you prefer. But I don't claim to know what would have happened if Bernie Sanders had been this year's nominee — that's a bit in the same category as "If my grandmother had wheels," isn't it? Whether Democrats lost seats in the House, and couldn't win winnable seats in the Senate, because of too much "socialism" and "defund the police" or because of not enough Medicare for All and Green New Deal — or because they ran anodyne, message-free candidates who declined to stand for anything in particular — entirely depends on where you're standing when you ask the question. To repeat myself, it's also too small a question.

Historically speaking, the Democratic Party has been an unstable electoral coalition since at least the Civil War, when it represented both native-born white Protestants in the South and immigrant white Catholics in the North. Those groups disliked and distrusted each other, but at least perceived a common enemy in the bankers and patrician classes of Boston and New York (and also, less salubriously, in Black people attempting to assert their right to citizenship).

While the Democratic coalition has been broken up and reassembled several times since then — most Southern whites, and a whole lot of Northern ones too, have fled to the other party — it remains, shall we say, less than stable. I'm not convinced the current intra-party struggle is so much about ideology as about literal class conflict and differential views of "economic justice." Maybe this is one of those cases where classical Marxist theory is correct and the former serves as a proxy for the latter.

To take two House Democrats seen as emblematic of the warring factions, it's possible to imagine a cautiously constructed policy agenda that could bring together Rep. Alexandria Ocasio-Cortez, a "progressive" who represents a working-class, majority-minority district in New York City, and Rep. Conor Lamb, a "moderate" who represents a working-class, predominantly white district in western Pennsylvania. Improved health care access (however we label it), a higher minimum wage, a government infrastructure program and free or low-cost public college would be immensely helpful to people in both those places.

But what do their constituents have in common with those of Rep. Abigail Spanberger, the former CIA agent who represents an affluent suburban district outside Richmond, Virginia? I'm not saying there's nothing. A desire to resist the vicious bigotry of Trump and his acolytes is not nothing. Defending reproductive rights for women, equal rights for LGBTQ people and civil rights for Black people and immigrants, in the face of determined right-wing pushback, is decidedly not nothing.

We can't possibly absorb the lessons of the 2020 election in two weeks, especially not while the defeated incumbent half-heartedly tries to stage a coup and the COVID pandemic grows more critical every day. But here's one lesson: Rhetorical gestures toward abstract ideals of justice, equality and democracy may have been just about enough to defeat a widely despised and famously incompetent president, but they are not nearly enough to defeat a surging fascist movement built on white nationalism, cultural dispossession, economic stagnation and anti-elite rage.

One political party in America now has a clear agenda and a loyal following, and has now taken a low-risk dry run at seizing and holding power without regard for laws or rules or standards of decency or those famous "democratic norms." That party didn't go all-in on that effort this time around, but it now sees that with the right leader and adequate planning — not to mention the necessary level of force — the task can probably be managed. The other party is against all that, gosh darn it! But it still doesn't know what it wants to be when it grows up, and it may not get the chance.