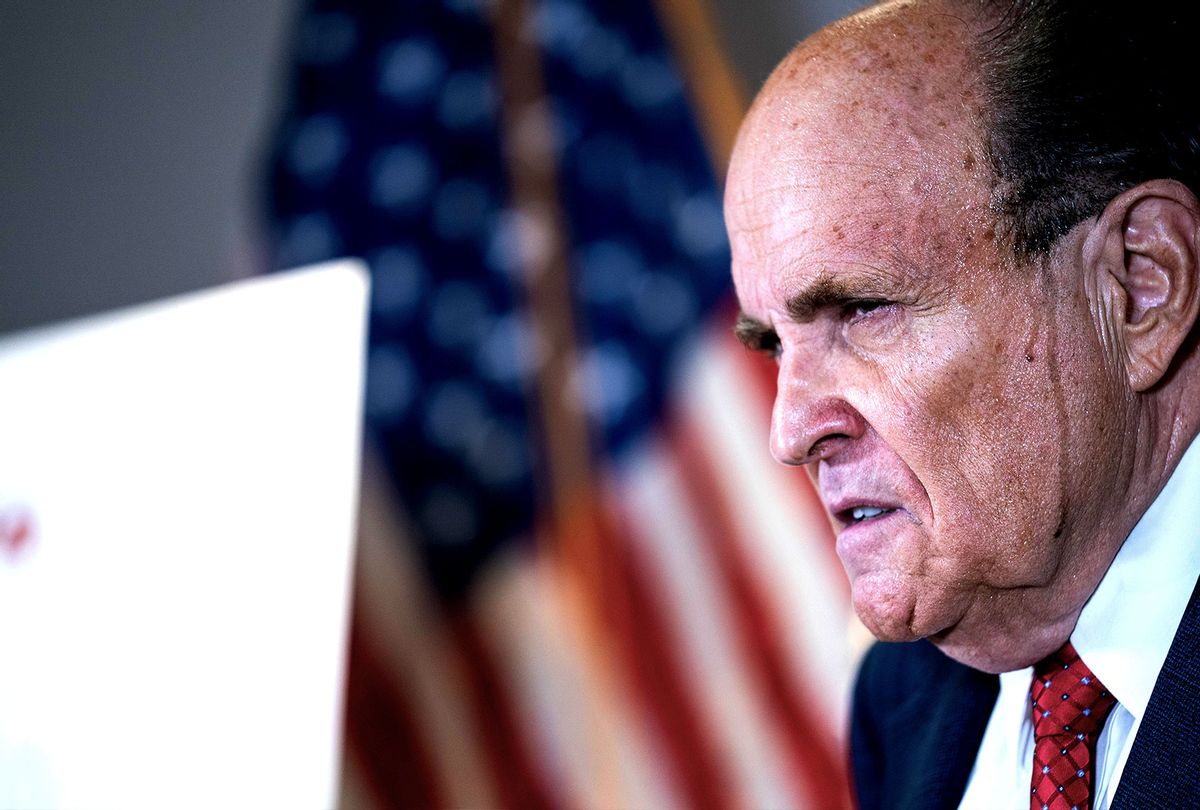 Donald Trump and his, uh, lawyer Rudy Giuliani are moving into the next phase of Trump's attempted coup, which entertainingly involves Giuliani sweating out the previous day's martinis into his hair dye while barking incomprehensible conspiracy theories at bewildered reporters.

Like most people reading this, I, too, wish I had a crystal ball and could look into the future at Jan. 20, 2021, to see how this all shakes out. In the meantime, the main point of concern is that nearly all Republican politicians are, to one degree or another, supporting Trump's efforts. Some, like Sen. Lindsey Graham of South Carolina, are flirting with openly seditious behavior by actively trying to get legal ballots thrown in the trash. Most, including Senate Majority Leader Mitch McConnell, are playing word games to avoid saying who they think will be or should be sworn as president in two months. The only Republican senator to speak out so far is Mitt Romney of Utah, who was also the only Republican senator who voted to convict Trump after his impeachment trial earlier this year.

The common theory in the political class is that this silence is borne out of fear of Trump and his tweeting fingers. Former President Barack Obama, who has been blunt in his concerns about the threat Trump represents to our democracy, characterized the GOP's passive consent to this coup exactly this way.

"I'm more troubled that you're seeing a lot of Republican officials go along with it, not because they actually believe it, but because they feel intimidated by it," Obama told MSNBC's Jonathan Capehart on Thursday.

Obama is right on two out of three counts. It's true that Republican officials don't believe a word of Giuliani's sweaty conspiracy theories, which Heather Digby Parton has described as "going full Infowars." It's also true that this GOP compliance is the real problem here. As I explain in the latest Standing Room Only newsletter, successful coups rely on various bureaucrats and lower level politicians who go along. If Trump pulls this off, it will be entirely because he has the tacit support of both state and congressional Republicans all along the way.

But Obama is wrong on the third front: Republicans aren't doing this because they're scared of Trump. They're doing this because most of them, on one level or another, want him to succeed. And even if he fails, they appreciate him advancing the idea that voters in certain areas — notably, cities where Black people outnumber white people — shouldn't really have the right to vote.

Let's face it: The reason Trump has gotten this far is that he's building on decades of Republican antipathy to democracy, an antipathy borne out of resentment that people they deem as "less" American than themselves — people of color, urban people, people who know what "tempeh" is — have the right to vote at all.

For instance, look at this 2016 article from Heritage Foundation writer John Merline, who argued that Hillary Clinton's popular-vote lead in that election didn't really matter, because if "you take California out of the popular vote equation, then Trump wins the rest of the country."

Breitbart writer Joel Pollak made a similar argument regarding this year's election, claiming on Twitter, "Biden won the popular vote — unless you exclude California." He went on to say that "you shouldn't" exclude California, but implied that this alleged fact is "worth noting," which is only true if you believe California voters are somehow less American than other voters. (For the record, this isn't even true. Biden's overall popular-vote lead now exceeds his 5 million-vote lead in the Golden State.)

This belief of Republicans that some voters shouldn't really be voters is especially evident in their enthusiasm for voter suppression, which has kicked into high gear ever since 2013, when Supreme Court Chief Justice John Roberts, a George W. Bush appointee, gutted the Voting Rights Act of 1965. This kicked off a flood of GOP-sponsored efforts clearly aimed at stopping as many people of color as possible from exercising their right to vote.

While it's become routine these days for pundits to lament Giuliani's supposed fall from grace, the reality is the man was always a virulent racist. As Radley Balko reminded readers of the Washington Post in 2016, Giuliani kicked off his 1993 New York mayoral campaign by helping to incite a racist police riot aimed at denying that elected Black leaders should have any authority over the NYPD. Giuliani led the drunken and armed crowd of cops as they blocked traffic on the Brooklyn Bridge, waving signs with racist cartoons of then-Mayor David Dinkins, and calling Black elected officials the n-word. The cops also physically terrorized two Black city council members.

Trump and Giuliani's official arguments for why Trump deserves to invalidate the election are a bunch of incoherent and baseless conspiracy theories. The actual argument underlying all that, however, is simple: The coalition Joe Biden built is composed of people who don't deserve the right to vote.

The reason the larger Republican Party isn't pushing back is that they largely agree with this underlying argument. Whatever personal distaste many Republicans may have for Trump's gauche behavior or the alcohol content of Giuliani's shoe polish sweat, they're inclined to see only upside for themselves in letting this play out.

Maybe Trump pulls off a miracle and succeeds in his coup, which means their party captures the White House for four years — or more.

But even in the far likelier event that the Trump coup fails, it's a win-win for most Republicans: He has done an immense amount to advance the goal of delegitimizing huge swaths of the American electorate that prefer Democrats. Besides, "establishment" Republicans don't have to go out to dinner with Trump anymore and listen to his vainglorious monologues. So of course Republicans aren't standing up to him. Why mess with a good thing?