Now that another black body has been laid to rest: George Floyd and the white gaze

"If we ... did that to a young white kid, you wouldn't need no study, you'd know what to do"— Reverend Al Sharpton 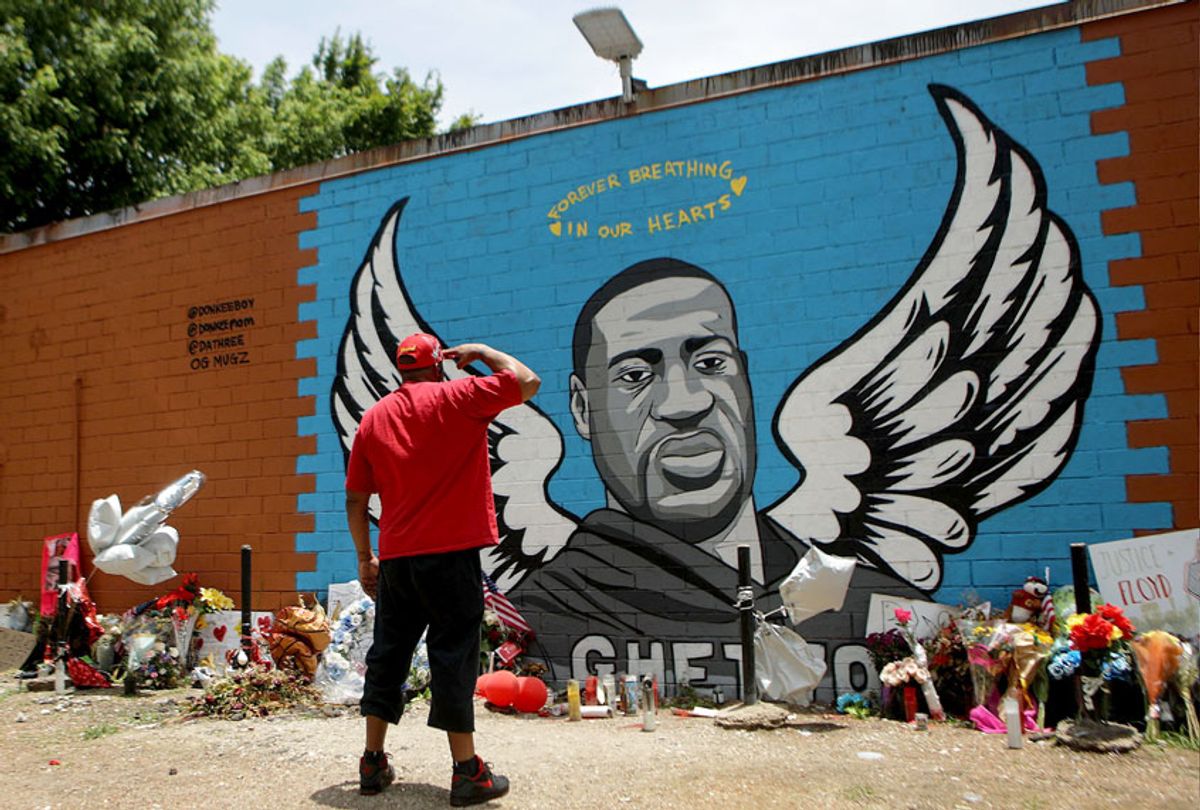 A man salutes at a mural dedicated to George Floyd, across the street from the Cuney Homes housing project in Houston's Third Ward, where Floyd grew up and later mentored young men, on June 10, 2020 in Houston, Texas. (Mario Tama/Getty Images)
--

I don't know who George Floyd is yet, but I am already angry. It is Wednesday, May 20th, eleven weeks into America's full consciousness of a worldwide pandemic that even with its rising slope of fatalities has this country divided across racial lines. In my trendy and high-rent Houston community white women with baby carriages stroll with other white women, and men in close proximity to me jog by. In a nearby park children play as if they reside in an alternate universe. None wear masks. On the other side of the country, for the same behavior, black folks are criminalized. A stranger paces back and forth, talks loudly in the lobby of the post office around the corner from my apartment. I yell at her— tell her to put on a fucking mask. [1] I am wrong, but truth is, I'm not sorry. Later, I convey the incident to my younger sister, who is 1,300 miles away, and she reminds me of my place. You are black. You live in Texas, she says. My sister is articulating the story of America which positions the white gaze towards blackness. Whether right or wrong, and no matter how innocuous "the wrong," blackness, under the watchful eye of whiteness, is forever suspect — the consequences of which are most always negative and oftentimes fatal.

My sister and I often go through the world with opposing beliefs — it's an opposition grounded in different modes of handling growing up in a dysfunctional family. My sister believes in the sanctity of family, that blood is thicker than water. Close friends have been important anchors for me. Like everyone in my family, my sister is religious. When injustice happens, she finds solace in the Bible. I go to pen and paper. I'm a tad left of center on the liberal scale. My sister is on the right with a firm sense of right and wrong. As such, when my sister rang on three separate occasions in one day following the death of George Floyd, I refrained from answering. Of Floyd's death, I knew anger would be my sister's response, but I was in no mood to hear the word that gets much traction when poor people of color — not companies or politicians influencing policy — steal and destroy. There was little vocal outrage from those in my personal and professional communities when personal protective equipment purchased by various states was looted from the American government during this pandemic. Not a peep of outrage reached my ears, therefore I had little capacity to now hear, from my sister or anyone else, who was wrong, why they were at fault, and how these events were distractions. I needed the gaze to focus and remain on the public servant who felt the need to restrict the breathing of man handcuffed and held to the ground by three other public servants.  I answer when the phone rings again Sunday. We exchange terse pleasantries. But before the call comes to an end, and not anticipating the response, I address the elephant in the room with the question, What do you think about George Floyd? On the other end is a lengthy silence. Then a deep sobbing. What you need to know is that my younger sister is stronger than I am. Though she is young, emotionally she is built like the elder women in most black and other ethnic families, which is to say she is matriarch material and vulnerability is not in the matriarch lexicon. Matriarchs shed tears only for their own blood. When the sobbing ends, my sister shares the story of my nephew, who is six years old. How the young boy watched the video of a policeman, a training policeman, kill a man begging for air in broad daylight in Minneapolis. She wants to know how to explain this archive of black death insistent on his inclusion. [2]

The burden of the racialized experience is shifted onto the white reader in Claudia Rankine's "Citizen: An American Lyric," which features documentary vignettes showcasing the dangerous banality of American racism. In the collection, Rankine relies on second-person point of view to force her white reader to embody the precarious terrain that is blackness in America, and as such, to confront their own complicity:

You tell your neighbor that your friend, whom he has met, is babysitting. He says, no, it's not him. He's met your friend and this isn't that nice young man. Anyway, he wants you to know, he's called the police.

Your partner calls your friend and asks him if there's a guy walking back and forth in front of your home. Your friend says that if anyone were outside he would see him because he is standing outside. You hear the sirens through the speakerphone.

Rankine's reliance on second-person point of view is grounded in Toni Morrison's assertion that the focus on the black body as a racialized subject must be shifted toward a critique of whiteness. In "Playing in the Dark: Whiteness and the Literary Imagination," Morrison interrogates knee-jerk approaches to the literary study of race that insist on approaching "racialism in terms of its consequences on the victim." A more comprehensive and accurate account of race in literary study, Morrison suggests, must focus on racism and "its impact on those who perpetuate it." If we re-situate Morrison's concern with the white gaze from the realm of literary theory and into the streets; if we situate this gaze inside the bedrooms, inside vehicles, near broken down vehicles, on tennis courts, inside superstores, at subway stations, on the side of the road hitchhiking, at recreation centers, on tax-payer funded city streets, inside places of worship, and the various other environments for which the presence of the black body equates to danger, then we should question responses to this particular kind of tragedy that position the gravity of race back onto the object of said racial violence. This might mean news outlets resist the trafficking and commodification of black death and grief with its assembly line of civil rights lawyers, black community leaders and distraught families of the dead, and instead focus on querying white people from all walks as to why these actions persist with regularity and impunity.

Forgive the inclusion of this petty rant directed at mostly well-intentioned liberal white people. There is more than one way to approach a problem, however the promotion of social justice syllabi and lectures given from the podium of wokeness may not be the most effective means rhetorically. Doing so only illustrates a tendency for liberal whites to distance themselves from other whites when the gaze falls on them. With liberal whites the enactment of racism is always the purview of someone less educated, someone conservative, someone poorer, someone richer, someone rural, someone religious, someone old, someone from the South. It is never them. Even in our racial lexicon, white distancing is present. For example, the word ally, which grates my last nerve, is woefully inadequate to describe white people and their relationship to racism; ally implies one's ability to join or equally sever an alliance; but how does one "join" a problem they are inextricably part of? [3] We hear this language of detachment when fathers give themselves props for babysitting. Nah dawg, this is your child and it's your job.

The post office. The stranger. An individual and communal yell is uncomfortable to expose, but is necessary work offered in an attempt to resist a kind of social justice performativity that positions the protester without real flaws. Five days before I learned the name of George Floyd I drove to the post office around the corner from my apartment. I was tired and angry, my body attempting to process previous hurt. When I drove to the post office, my mind was still in Puerto Rico where the American government left brown people to die in the wake of Hurricane Maria. I was tired and angry and still attempting to process that an Arab journalist residing in the U.S. and employed by an American newspaper was killed and American leaders acted as if a foreign government had simply stepped on their toe. I was tired and angry that in response to a worldwide pandemic disproportionately affecting some Native populations, the Seattle Indian Health Board requested medical supplies from state and federal agencies and instead were "mistakenly" sent body bags. I was tired and angry because Breonna Taylor and Ahmaud Arbery were the most recent names added to some sinister catalogue. The object of my brief tirade could have taken her phone and dialed 911. She could have walked to her vehicle and retrieved a gun. Instead, and luckily for me, she walked to her truck, reached in, and —voilà — pulled out a face mask. In that brief moment of individual protest I felt seen and heard, but more importantly, I hope this stranger felt some responsibility for the we supposedly foundational to We the People.

Niki Herd is the author of "The Language of Shedding Skin" and co-editor with Meg Day of "Laura Hershey: On the Life & Work of an American Master," which features the poetry of and critical essays about disability activist Laura Hershey. Twice nominated for the Pushcart Prize, Herd’s poems have appeared in the Academy of American Poets (Poem-a-Day), Lit Hub, The Rumpus, and "The BreakBeat Poets Vol. 2: Black Girl Magic," among other journals and anthologies. Her work has been supported by the Bread Loaf Writers’ Conference, the Newberry Library, and Cave Canem. She lives in Houston where she is an Inprint C. Glenn Cambor Fellow of Literature and Creative Writing at the University of Houston.