Near-blank police incident report on Breonna Taylor, killed in her home, lists injuries as "none" 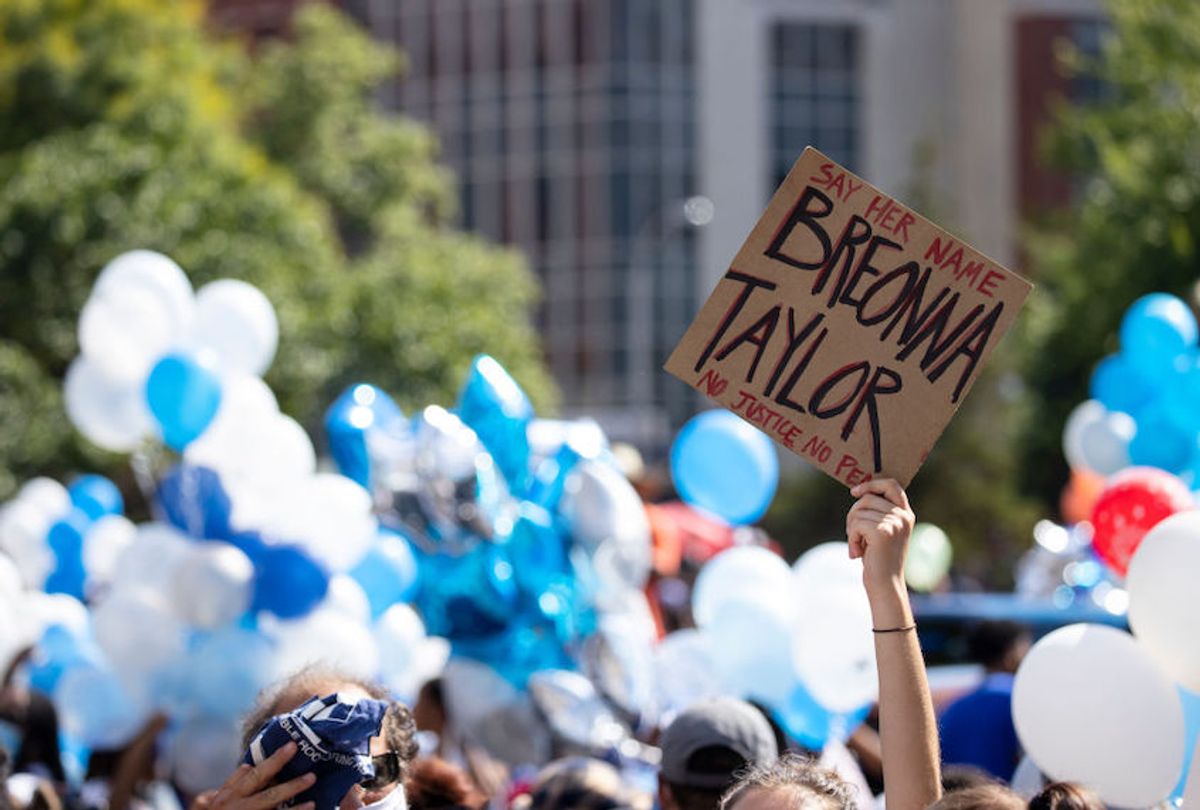 People gather with balloons for a vigil in memory of Breonna Taylor on June 6, 2020 in Louisville, Kentucky. (Brett Carlsen/Getty Images)
--

On Wednesday, Louisville Metro Police released the incident report for the death of emergency room technician Breonna Taylor, a Black woman shot and killed in her apartment by police executing a no-knock search warrant nearly three months ago. Outcry over Taylor's death and the slow pace of the investigation into the police action that killed her helped spark a wave of Black Lives Matter protests in Louisville and across the world that is still ongoing.

The report, obtained by the Courier Journal newspaper, runs four pages and is almost entirely free of information.

The report includes baseline facts such as the incident's time, date, case number and location, as well as the victim's age (26), sex (female) and full name, Breonna Shaqulle Taylor.

Under injuries, police reported "none." Officers shot Taylor at least eight times and, according to family lawyers, she died on the floor of her apartment hallway in a pool of blood.

The weapon is listed as a handgun.

The description of the incident is "death investigation — LMPD involved," but under "forced entry," the box for "no" was checked. Officers reportedly broke down Taylor's apartment door with a battering ram.

The report lists the names and ages of the three officers ("Offenders") who fired their weapons: Sgt. Jon Mattingly, 47; Myles Cosgrove, 42; and Brett Hankison, 44.

Each is identified as law enforcement, however, the fields identifying their employer — the Louisville Metro Police Department, as noted in the incident description — were not filled out.

Under "bias motivation," the report says: NONE (NO BIAS)

Most frustratingly, the "narrative" section — which is supposed to lay out the events as they happened that night — is blank, save for two words: "PIU investigation."

"This document is proof that LMPD continues to make a mockery of transparency," said Jon Fleischaker, legal counsel for the Louisville Courier Journal. Fleischaker was also a lead author of Kentucky's Open Records law, which mandates the release of all public documents, barring exceedingly rare circumstances.

The Courier Journal has filed a lawsuit against LMPD, demanding the immediate release of the investigative file. Police have refused, citing an ongoing investigation. (The FBI and the state of Kentucky have each opened investigations into the shooting.)

Here is how the events surrounding Taylor's death have been reported so far.

At 12:40 a.m. the night of March 13, three plainclothes LMPD officers executed a "no-knock" search warrant at Taylor's apartment, breaking down her door while she and her boyfriend, Kenneth Walker, were in bed asleep.

The officers say they announced themselves, but Walker and neighbors disagree. One officer claims the group identified themselves as police with a warrant on "six or seven occasions"; Walker says the cops pounded on the door for about 30 seconds, but he did not hear them identify themselves.

After the police took the door, Walker, a licensed gun owner, fired a warning shot at what he believed to be criminals, allegedly hitting one of the officers in the leg.

The officers then poured more than 20 rounds into the apartment, with at least eight of them striking Taylor. Eight minutes later, she was dead in her hallway.

Walker was charged with attempted murder and assault, but Kentucky Commonwealth's Attorney Tom Wine dismissed the charges May 22, saying "additional investigation is necessary."

Wine left open the possibility of re-raising charges pending results of investigations by the FBI and the Kentucky Attorney General's office.

Three days later, video of the death of George Floyd in Minneapolis police custody went viral, sparking protests against police violence that spooled out over time into a historic bout of nationwide civil unrest.

Audio of Walker's 911 call, released May 28, more than two months after Taylor's death, appears to support Walker's claim that he did not understand the intruders were police, and coincided with the surge of national outrage. Louisville quickly became one of the largest protest hotspots.

Though Police Chief Steve Conrad had initially announced on May 20 that he would retire at the end of June — citing events surrounding Taylor's death — he was relieved of duty less than two weeks later after it was revealed that LMPD officers involved in the June 1 police shooting death of local restaurant owner David McAtee had not turned on their body cameras, in violation of departmental policy, amid several days of citywide demonstrations protesting the deaths of Floyd and Taylor.

The detective who requested the "no-knock" warrant has been reassigned, and the matter has since been referred to the FBI amid a wash of questions about the warrant's provenance.

Police did not find any drugs at Taylor's home, the pretext for the warrant. Nor were the officers investigating Taylor as a primary suspect; they alleged her apartment had been receiving drugs in the mail.

Moreover, the cops' main suspect, Jamarcus Glover, had been apprehended earlier that night, along with his accomplices, before the police broke down Taylor's door.

The department obtained the special warrant because, per the application, the detective had "verified through a U.S. postal inspector that Jamarcus Glover has been receiving packages" at Taylor's apartment.

"… Mr. J. Glover may be keeping narcotics and/or proceeds from the sale of narcotics" at Taylor's apartment "for safekeeping," the detective added.

But the Louisville postal inspector told local station WDRB News last month that in January another law enforcement agency had asked his office to look into whether suspicious mail was being routed to Taylor's apartment. They concluded Taylor's mail was clean.

The warrant process has since been referred to the FBI, which has launched its own investigation into Taylor's death.

Brian Gallini, a University of Arkansas professor and Fourth Amendment expert, told the Courier Journal that he doubted circumstances merited the special warrant, which allows police to enter a home without identifying themselves or knocking.

"If it was appropriate here, then every routine drug transaction would justify grounds for no-knock," he said.

"Under the Fischer administration, there has been a consistent policy and practice of refusing to tell the public what is going on with the police, regardless of how inappropriate the officer conduct has been — even when it was criminal, as in the LMPD Explorer case," Fleischaker told the Courier Journal, referencing Louisville Mayor Greg Fischer.

"How can we even seriously debate police reform if the police won't engage and the mayor won't stand up to them?"

There is still no word on whether the officers who shot Taylor will face charges or disciplinary action.

Kentucky state law and LMPD's police union contract both establish high bars for due process requirements for officers, and Mayor Fischer told local NPR affiliate WFPL that any rash moves that went outside the lines could have consequences, including possible reinstatement.

One of them, Brett Hankisson, has since been accused of sexual assault by at least two women.

"He drove me home in uniform, in his marked car, invited himself into my apartment and sexually assaulted me while I was unconscious," one accuser posted to Facebook on June 4.